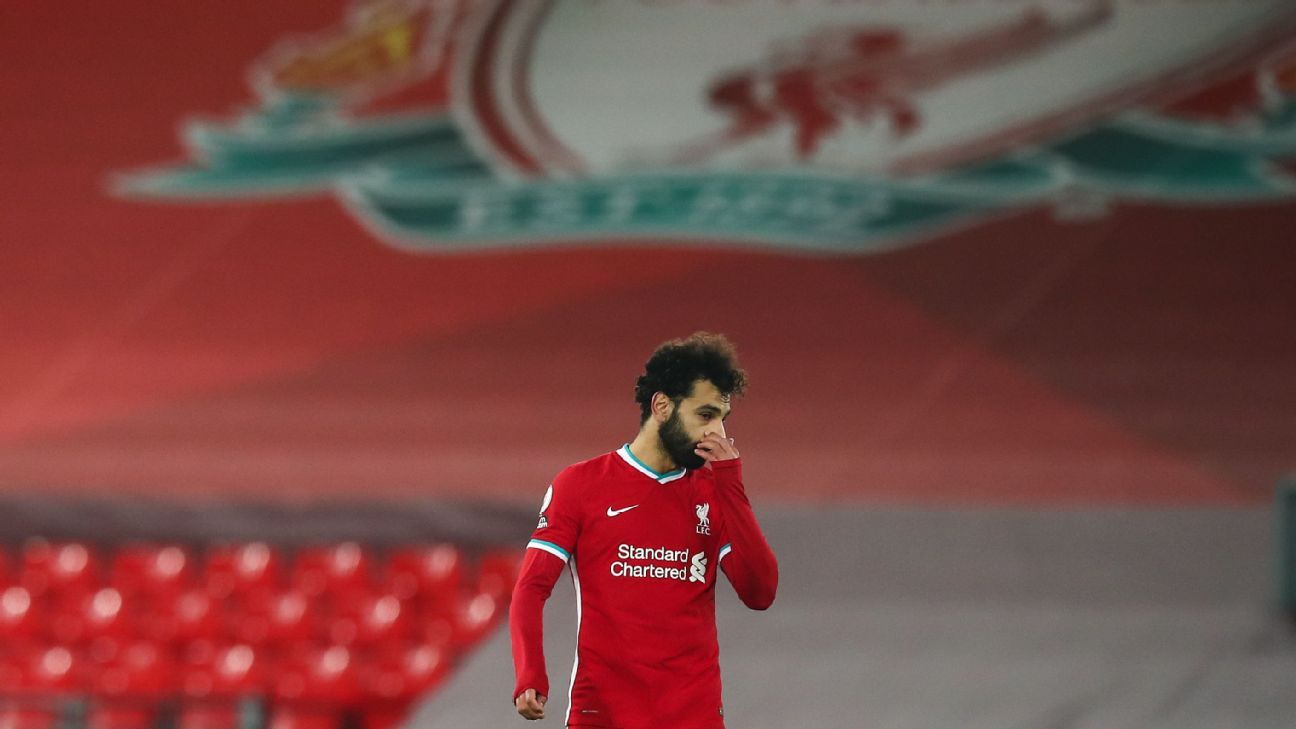 Liverpool face a dilemma with Mohamed Salah this summer. ESPN’s Insider Notebook has the latest.

Jump to: Liverpool vs. United, and a return to normality? | PSG wait on Mbappe | England players in Euro 2020 limbo | Zlatan’s Milan return causes a buzz in U.S. | McSauce or Tin Man?

Liverpool are facing a conundrum over the future of Mohamed Salah this summer, sources told ESPN. There is a growing sense within the Liverpool squad that Salah is eyeing a new challenge elsewhere, and intermediaries who have worked closely with the club previously have privately expressed the belief a transfer may be possible.

The situation will be influenced in part by how Liverpool finish the season, needing to stop an alarming slump in the Premier League yet chasing a third Champions League final appearance in four years. Sources added the Reds are relaxed about the situation, given the 28-year-old’s contract has two years left to run, and there has been no obvious deterioration in the forward’s form or commitment to the club with Salah the joint leading scorer with Tottenham’s Harry Kane in the Premier League this season with 17 goals.

Missing out on Champions League qualification would increase financial pressures as a result of the coronavirus pandemic — Liverpool earned €111m from the competition when they won it in 2019 — with Jurgen Klopp’s side seventh in the Premier League, five points off the top four. Those pressures are felt elsewhere, particularly at Real Madrid and Barcelona — two possible destinations for Salah.

Liverpool face Real Madrid in the Champions League quarterfinal first leg on April 6 and Salah was interviewed by Spanish newspaper Marca this week, where he left the door open to playing in Spain. But it would represent an extensive effort by La Liga‘s big two to raise the funds to tempt the Egypt international away from Merseyside, given he would likely be worth in the region of £100 million. Barcelona and Madrid are both keen on Borussia Dortmund’s Erling Haaland and have held talks other a potential move for the striker, which would also limit Salah’s options.

Liverpool may look to defer the decision over Salah’s future for another year but he would then have 12 months left on his deal and would command a much smaller fee than he would this summer. A new Liverpool contract may be the best outcome for all parties, allowing the club to protect their star man, giving Salah the “love” he craves and his potential suitors another year to replenish their transfer funds.

Klopp is expected to dismiss talk of Salah leaving but while he will no doubt fight to keep him at the club, the reality is more complex. — James Olley

UEFA are hopeful the 2021 Super Cup will mark a return to full stadiums for club competitions, sources told ESPN. The match could even be a showdown between Liverpool and Manchester United, should both Premier League rivals win their respective cup competitions this season.

The Super Cup, contested by the winners of the Champions League and Europa League, is scheduled to be staged at 18,500-capacity Windsor Park, Belfast, on Aug. 11. The match is the next significant date on the UEFA calendar after Euro 2020. UEFA is pressing ahead with plans for supporters to attend games in all 12 host cities at the tournament this summer, with confirmation of the schedule due to be announced on April 19, but sources said it is unlikely any game will be played in front of a capacity crowd. UEFA also said this week that it will leave capacity limits to local authorities.

A return to full stadiums could come at the Super Cup, though, with all adults in the UK, including Northern Ireland, due to be vaccinated by the end of July. Sources said there is optimism the match could be the first major UEFA fixture to host a crowd at pre-pandemic levels. The UK government has announced that all COVID-19 restrictions will be lifted on June 21 in England, subject to ongoing progress with the nation’s vaccination programme, but the Northern Ireland executive has yet to announce its own date for a return to normality.

The game could take on extra significance if bitter rivals Liverpool and United win the Champions League and Europa League respectively this season. Both clubs have a large fan base in Ireland and Northern Ireland, so the prospect of the two sides meeting in a competitive fixture in Belfast would offer a robust test of when fans are back. — Mark Ogden

Both Neymar and Mbappe have contracts at PSG until 2022 but while Neymar has agreed an extension, discussions over Mbappe’s deal have proven more complex. One of the theories for the hold up put forward by sources is that there is a discussion over whether Mbappe could agree to sign a contract for a shorter length than Neymar, and play one more season at the club before moving on elsewhere.

PSG owners, Qatar Sports Investments, have no intention of letting Mbappe run his contract down so he could move for nothing next summer, which would mean ending the impasse over a new deal or being open to offers for the France international this year.

Liverpool and Real Madrid have continually been linked with Mbappe in the transfer gossip columns, though the Premier League side’s main focus would be clarifying Salah’s future at Anfield before pressing ahead with a search for his replacement. — Julien Laurens

ESPN FC’s Alejandro Moreno answers the toughest question in football at the moment.

Gareth Southgate’s scepticism over naming an expanded England squad for this summer’s Euro 2020 finals has heightened the pressure on those scrambling for places at this summer’s tournament.

UEFA were rumoured to be willing to allow countries to name two additional players in a 25-man squad for the finals as a contingency for any COVID-19 related issues. Italy manager Roberto Mancini proposed a 26-man limit and the issue was raised at UEFA’s executive committee meeting earlier this week.

Southgate is due to name his travelling party a few days after the Premier League season ends on May 23, with many high profile players sweating on their inclusion. Liverpool defender Trent Alexander-Arnold was the highest-profile absentee from the recent international break and all those on the fringes, including James Maddison, Jesse Lingard, Jude Bellingham and Bukayo Saka, know time is running out to bag a place.

Southgate said: “I know there’s some discussion about perhaps an extended number in the squad. I’m not certain I’m behind that.

“I know COVID could play a part but I think there’s a skill to picking 23. It means you’ve got to make good decisions, important decisions and I think some of that can be lost as you get an extended group. So let’s see how that develops but I’m not 100% for it, I have to say.”

Zlatan Ibrahimovic‘s return to AC Milan has helped make the club the most popular Italian sports team among fans in the United States, a study has found.

YouGov Football Index, a global sports research company, asked fans to rank their favourite sides according to six key factors and Milan enjoyed a 221% increase in their score from February 2020, when Ibrahimovic returned to the club.

The poll asked fans to rate their favourite teams according to the impression the club and its players has on them, how highly they rate the management set up, the fan culture, tradition, quality of play, and success on the field.

Milan’s surge in interest has seen them break into the top 10 teams among fans polled in the U.S., with Manchester United still No.1 ahead of Real Madrid and Barcelona. The Premier League side’s standing dropped by 13% compared to this time last year.

Ibrahimovic, who had a spell in Major League Soccer with LA Galaxy before returning to Europe, has also boosted Milan’s standing closer to home, with the club now second to Juventus in Italy when last year they trailed behind Manchester City and United in their own country, according to YouGov.

The striker, who joined Milan on loan in 2010 from Barcelona before making the move permanent, has spearheaded the club’s first serious title challenge in many years this term, though Stefano Pioli’s side trail rivals Inter by six points at the top of Serie A. — Andrew Cesare Richardson

The Scotland international is enjoying his best season at United to date, with four goals in the Premier League and seven in total as the club look to finish as the best of the rest behind Manchester City in the league as well as looking to the Europa League to end a five-year wait for a trophy.

McTominay scored two goals inside the opening three minutes as United thrashed arch rivals Leeds 6-2 in December, and as is custom when the 24-year-old enjoys a man of the match performance, “McSauce” trended on Twitter. The moniker has become McTominay’s unofficial nickname among United fans but just don’t call him that to his face.

Speaking exclusively to ESPN, McTominay said: “I don’t know where that originated from. It’s social media isn’t it? I don’t pay attention to Instagram and Twitter. I tend to stay away.

“I’ll give you a nickname, my old reserve team coach Warren Joyce used to call me the Tin Man. So, yeah. Whenever I was growing up, I was really small, then I went really tall all of a sudden. It was quite a big change, but I was really like, my legs, I always struggled to move my hips and stuff.

“Dean Henderson still calls me it, because we were in the same reserve team together so he still calls me Tin Man to this day. And the foreign lads are always looking at him like: ‘Are you alright, why are you calling him that?’

“So that’s been one for years now. But we don’t need that one to stick, I don’t like it!” — Alex Shaw