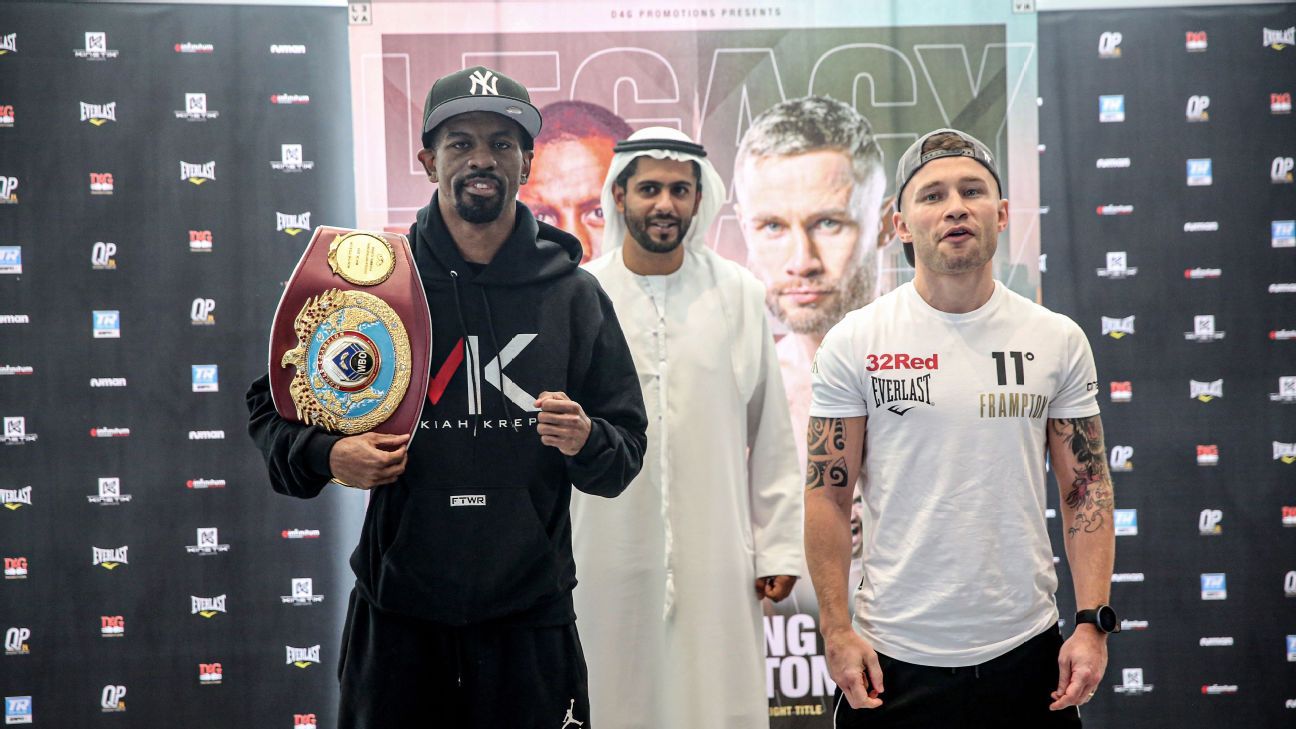 The Northern Irish boxer has looked back through the annals of history to understand the significance of the feat he is attempting to pull off at Caesars Palace Dubai in Dubai, United Arab Emirates (ESPN+, 2 p.m. ET).

Frampton (28-2, 16 KOs), 34, from Belfast, is aiming to become a three-division world champion with a victory over Herring. Frampton would become the first boxer from Northern Ireland or the Republic of Ireland to do so, as well as the third from Great Britain.

“It’s been done a couple times in the UK but never in Ireland,” Frampton told ESPN. “Bob Fitzsimmons [heavyweight, light-heavyweight and middleweight] did it, then Ricky Burns [super lightweight, lightweight, junior lightweight] and Duke McKenzie [junior featherweight, bantamweight, flyweight], but the way I’ve done it would have been better than the way Burns and McKenzie did it.

“It’s a huge opportunity to go down as the best fighter to come from Ireland, but also one of the best Brits as well and I would join an elite list.”

Frampton has beaten top fighters like Leo Santa Cruz and Nonito Donaire in standout nights, but will have to make history without the help of his army of fans as Saturday’s fight in Dubai will take place behind closed doors.

Frampton also hopes a victory over Herring sets up a fight in his home city this summer, possibly at the outdoor Windsor Park with fans able to attend after restrictions are lifted.

“It’s a bit s—ty there won’t be any of my fans there for the Herring fight, but there’s nothing I can do about that,” he said. “I imagine there will be a large TV audience for it though and I just have to remember that.

“I know after this there’s not much left for me to achieve in the sport, it has to be big fights from here on in for me. I’m not looking past Jamel Herring, he’s a quality fighter, but there’s the potential opportunity to unify titles in another weight division. Shakur Stevenson is the mandatory for the winner of this fight, that fight has been discussed, and so has Oscar Valdez. They are both with Top Rank so it makes it an easy fight to make.”

Either of those opponents are equally attractive for Herring, who makes a third title defense after impressively lifting the title with a unanimous decision win over Masayuki Ito two years ago. Questions were raised about Herring in his last performance, however, when Jonathan Oquendo was disqualified at the end of the eighth round because of an illegal head-butt that opened a cut over Herring’s eye during the fifth.

“It just got ugly,” Herring said in his post-fight interview. “I wasn’t too satisfied with my performance, to be honest with you.”

But Herring (22-2, 10 KOs), 35, a former U.S. marine, has a considerable 5-inch height advantage, and a 7-inch reach advantage over Frampton, and has been pushed in training by pound-for-pound No. 1 Terence Crawford.

The Champ @JamelHerring has a P4P great always motivating him, especially ahead of the biggest fight of his life. #HerringFrampton | SATURDAY | ESPN+ pic.twitter.com/Z2QxOybDlV

Frampton might be more experienced, but Herring does not lack experience after competing at the 2012 Olympics as an amateur and turning professional later that year. Herring has competed at elite level for two years, whereas Frampton won his first world title seven years ago.

Herring won his first world title at age 33, but he started his career late after serving two tours in Iraq as a marine. A victory on Saturday would also be a career high-point for Herring.

“Winning would solidify me as a legit junior lightweight champion,” Herring told Top Rank. “I’ve still got a lot to prove. Carl to me, his legacy is already cemented, he didn’t need this fight. A win here would open a lot more doors for bigger fights. With me being a former marine, I want to go down as on as one of best marines to represent in the sport of boxing.”

Prediction: Herring’s size and southpaw stance will make it a difficult assignment for the more experienced Frampton. However, Frampton’s quality will see him edge a narrow decision win.

In their own words

“Yes, a win over Frampton would be a career-defining milestone. You want to win a world title. OK, we win the world title. Well, what’s next? We had to successfully defend our title to be considered a real champion. I’m getting to the conversation of, ‘Oh, you want to face the other champions and the other big names,’ and Carl Frampton is a two-division world champion. He has done great things in his career.

“The way I win this fight is just being me, the Jamel that won the world championship. I have to bring that hunger back. I feel like my back is against the wall, even as the champion.”

“I’m very proud of what I’ve done in my career so far, but the chance to go down as the only ever three-weight world champion from the whole island of Ireland — one of the only British fighters to ever do it as well — you join an absolute elite bunch of global fighters to do that. I want to do that. I’m so determined to make that happen on the night, and personally, it will mean the world to me.

“I gotta expect the best Jamel Herring there’s ever been. We look at Jamel’s last performance [against Jonathan Oquendo], he gets a bit of criticism from that, from the media and from other people. My own performance wasn’t brilliant in my last fight [against Darren Traynor]. I think both of us need to be a lot better in this fight to come out victorious. I’m prepared to be better. Hopefully, Jamel is as well.”

39.3: Percentage of landed punches by Herring. The average for the division is 29.5%, according to CompuBox.

27: Herring’s age when he started his professional boxing career.

4: At 35, Herring is the 4th oldest boxer to hold a junior lightweight title (Azumah Nelson, Daniel Londas and Mzonke Fana are the others).

3: Frampton is looking to become a world champion in 3 different divisions after reigns at junior featherweight and featherweight.

16.5 and 57.3: Junior lightweight division average for punches landed and thrown per round. Frampton is below the average at 14.1 and 51.4.