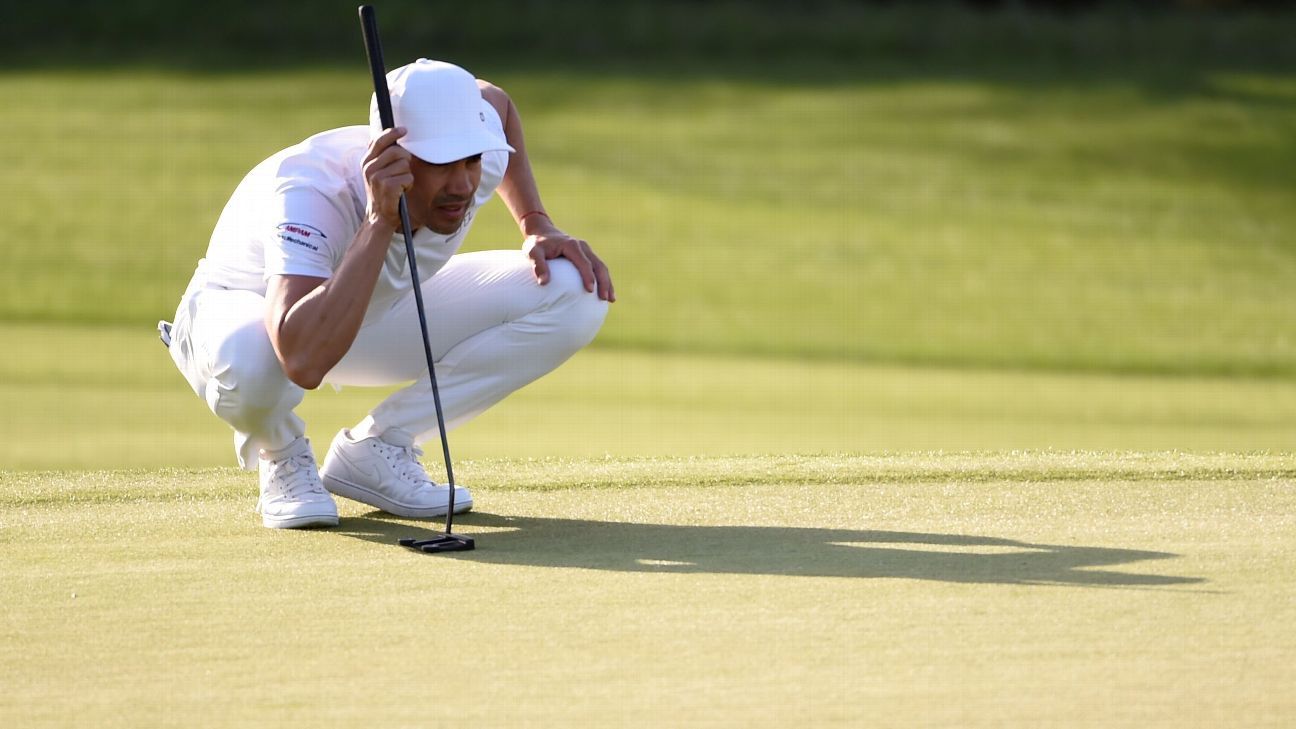 SAN ANTONIO — Camilo Villegas chipped in twice to highlight a nine-birdie round that earned him an 8-under 64 and the first-round lead at the Valero Texas Open on Thursday.

Sung Kang, a 33-year-old South Korean, is two shots back with Cameron Tringale after each had a 66 at TPC San Antonio’s Oaks Course. Jordan Spieth, whose struggles the past three years appear to be subsiding after four top-10 finishes the past two months, is three back (67) with Seung-Yul Noh and Hideki Matsuyama.

Phil Mickelson dropped to 15 shots back when he had a 10 on the 18th hole — he took two penalty shots and another three strokes trying to get away from a greenside stream — and ended with a 79.

Villegas won the Tour Championship in 2008 and the Wyndham Championship in 2014, but has endured injury and then the death of his 22-month-old daughter last year. His two top-10 finishes this year include a tie for eighth at the Honda Classic.

“Sometimes it goes your way, and sometimes it doesn’t,” Villegas said. “The last few years I’ve been up and down with many things. We keep showing up and the results start showing up.”

He bogeyed his opening hole Thursday and birdied six of seven holes in the middle of his round.

That streak included putts of 23 and 20 feet and a chip-in from the fringe at his 13th hole. He finished up when he holed out from about 45 yards away to the side of the green.

“Some days the hole is a little bit big,” Villegas said. “On [the last hole], I got really lucky. I hit a chip that was probably going off the green, and it hits the pin and goes in.”

“I played great today, but I didn’t start off very good,” Kang said. “I struggled a little bit with a new driver from the start, but I found a way to hit it on the back nine so started driving a lot better.”

Kang birdied three of his last four, including his finishing hole with a 22-foot birdie.

Spieth, No. 1 in the world in 2016 and now 53rd, birdied three of his opening five holes. Looking for his first win since the 2017 Open Championship, he had steadily dropped in the world rankings until he hit No. 92 in January after missing the cut in five of eight starts.

“Overall with the score, I certainly would have signed up for 5 under starting out,” Spieth said. “I felt like I played some really nice golf on our front nine. I didn’t quite hit it as good as I have been, but certainly the short game came through. I mean, 5 under around this track is a good score. I’d take four more of them.”

Five of Spieth’s seven birdies came before he made the turn. For the day, three of his birdie putts came from longer than 15 feet, including a 21-footer at his second hole.

“Overall, just chipped and putted really well, which was the difference-maker today,” he said.

He used a putter from the fringe while 16 feet away for birdie at his second-to-last hole. He made up for hitting into the bunker on the right off the tee, but he couldn’t recover on his 18th.

He pushed another tee shot right and hit a provisional. But he found his tee shot near trees, punched it out near the green, yet failed to get up and down and settled for his second bogey.

“It just got a little bit off there today off the tee on contact,” Spieth said. “The rest of the swing, I mean, I feel like I’m swinging the same and out in front of it and putting a good move on it.”

Spieth has used the Texas Open to bolster his game in the past. In 2015, he finished second after four-straight birdies late. Two weeks later, he won his first major at the Masters and in June won the U.S. Open.

In February, Spieth had a share of the lead after a third-round 61 at Phoenix and he led by two shots going into the final day at Pebble Beach.

Last month at the Arnold Palmer Invitational in Florida, he was two shots out of the lead heading into the final day and finished tied for fourth.

He made up for a bogey on his 17th with an 11-foot birdie putt at his last.

“I made a few silly mistakes here and there, kind of two sloppy bogeys, but other than that, I felt like I played really solid,” Scheffler said. “I was pretty frustrated bogeying a par 5 there towards the end of the round, so having a nice bounce back will give me some momentum and make me rest a little easier.”

In addition to Mickelson’s final-hole struggles, he had a three-putt inside nine feet and on the next hole missed from less than four feet.

Abraham Ancer was tied with Spieth at 4 under early in his second nine, but a triple-bogey and bogey finish put an even-par 72 on his card.