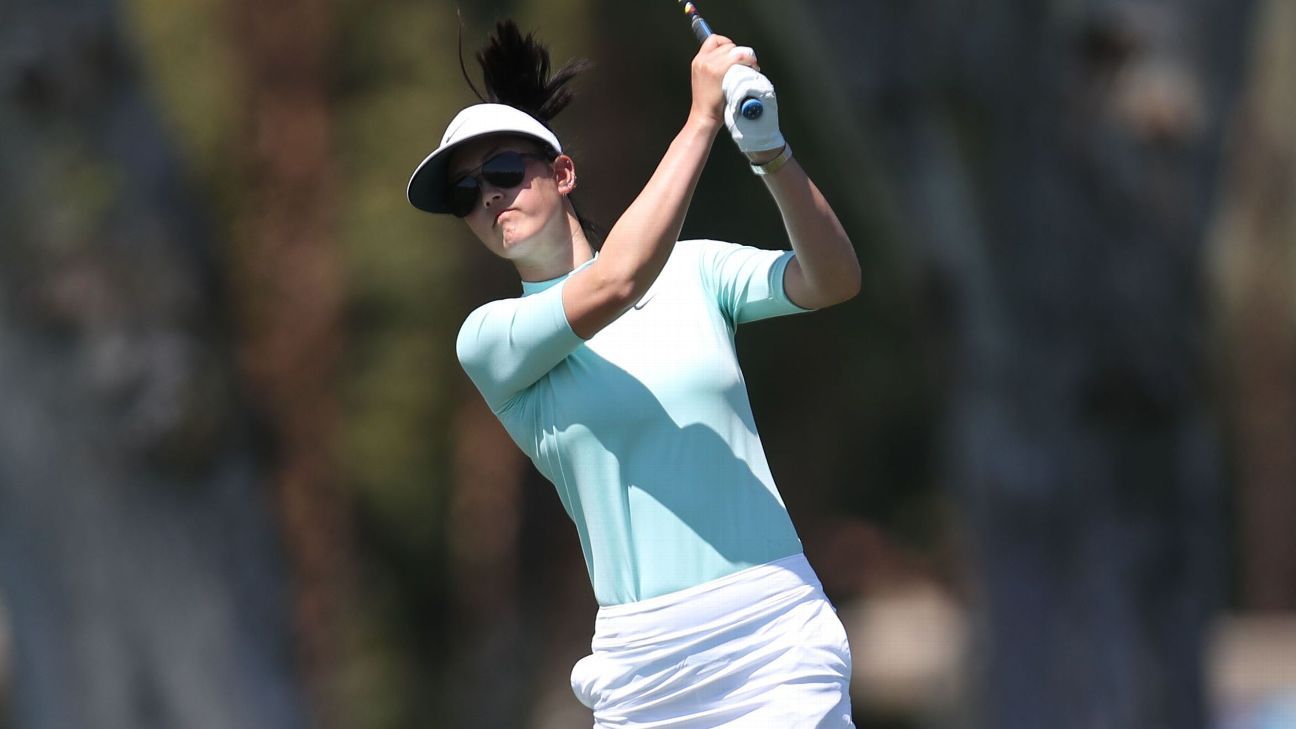 RANCHO MIRAGE, Calif. — Michelle Wie West tumbled out of the ANA Inspiration on a hot, breezy Friday afternoon in the desert. Patty Tavatanakit held onto the lead.

Playing for the second straight week after a 21-month break, Wie West followed an opening 2-under 70 with a birdie-less 79 to miss the cut in the first major championship of the year.

“Wasn’t a good day,” Wie West said. “Got a little mucky from the first hole. Was right up against a tree. … I feel like I’ve had some really good moments and some really bad moments. Definitely a lot of positives to take from and definitely have my work cut out for me.”

The long-hitting Tavatanakit took the lead with an opening 66 and shot a 69 in 97-degree afternoon heat to reach 9 under, a stroke ahead of Shanshan Feng.

“I didn’t want to take it the way that like, `Oh, I’m leading a major championship,'” Tavatanakit said. “I just wanted to look at it as it’s another round, it’s another tournament, even though it’s a big tournament.”

Tavatanakit holed out from 115 yards for eagle on the par-4 15th on her first nine, with the ball flying into the hole.

“I thought it was just a good shot,” Tavatanakit said. “I thought it hit the pin and went somewhere else. No one clapped, there are no fans. We couldn’t figure it out. It was so bright we all couldn’t see.vI walked up and looked in the hole and I was like, `Oh, it went in.'”

The 21-year-old former UCLA player from Thailand missed the cut last week in Carlsbad in the Kia Classic with rounds of 71 and 79. She tied for fifth in February in the Gainbridge LPGA for her best LPGA Tour finish.

Wie West bogeyed the first three par 5s — the lowlight a 100-yard drive into a left-side tree on No. 9. With only mask-less father B.J. following her with no spectators at Mission Hills, she opened with bogeys on Nos. 1 and 3, a day after making long birdie putts on each of them to start her back nine.

Wie West, 31, returned to competition in Carlsbad, missing the cut with rounds of 81 and 74. She was playing for the first time since marrying Jonnie West, the son of basketball great Jerry West, in August 2019 and giving birth to daughter Makenna last June.

“Making the right decision takes practice, too,” Wie West said. “That’s something that is hard to practice when you aren’t playing, and that’s probably where the rust really showed.”

Feng also is coming off a long layoff after sitting out 16 months because of the coronavirus pandemic and a recent visa delay. The Chinese star birdied the final two holes for a 69.

“Result-wise it doesn’t really matter because I’m very happy about what I’m doing as the first tournament coming back,” Feng said.

International players held the first 19 positions on leaderboard, with Moriya Jutanugarn of Thailand third at 7 under after a 69.

“Just have to be a lot of patient out there,” Jutanugarn said. “I’m not a long hitter, so I just have to take what I can and just trying to play smart.”

Two-time major champion Anna Nordqvist was 6 under after a 70. She birdied two of the last three holes.

“Having won two before, those are the ones that motivate me to go practice every day,” the 33-year-old Swede said. “If you got a little bit of a taste of it, like it’s just such an incredible feeling.”

Charley Hull also was 6 under after her second 69. She birdied three par 5s.

“I have great memories here,” Hull said. “I first played in this event I think when I was 15 years old as an amateur and my dad was here with me.”

Top-ranked Jin Young Ko, the 2019 winner who was unable to play the event last year because of travel restrictions, shot a 70 to join defending champion Mirim Lee (70) and fellow major champions Inbee Park (69), Lydia Ko (69), Sophia Popov (69) and Georgia Hall (70) at 5 under.

Park, the 2013 champion who won at Carlsbad in her first start of the year, noted the 100-degree heat expected Saturday and Sunday.

“It’s just the heat that we just got to watch out for,” Park said. “The course is going to play firm and fast, which is a good thing, and obviously you just going to have a lot of energy to play in this heat.”