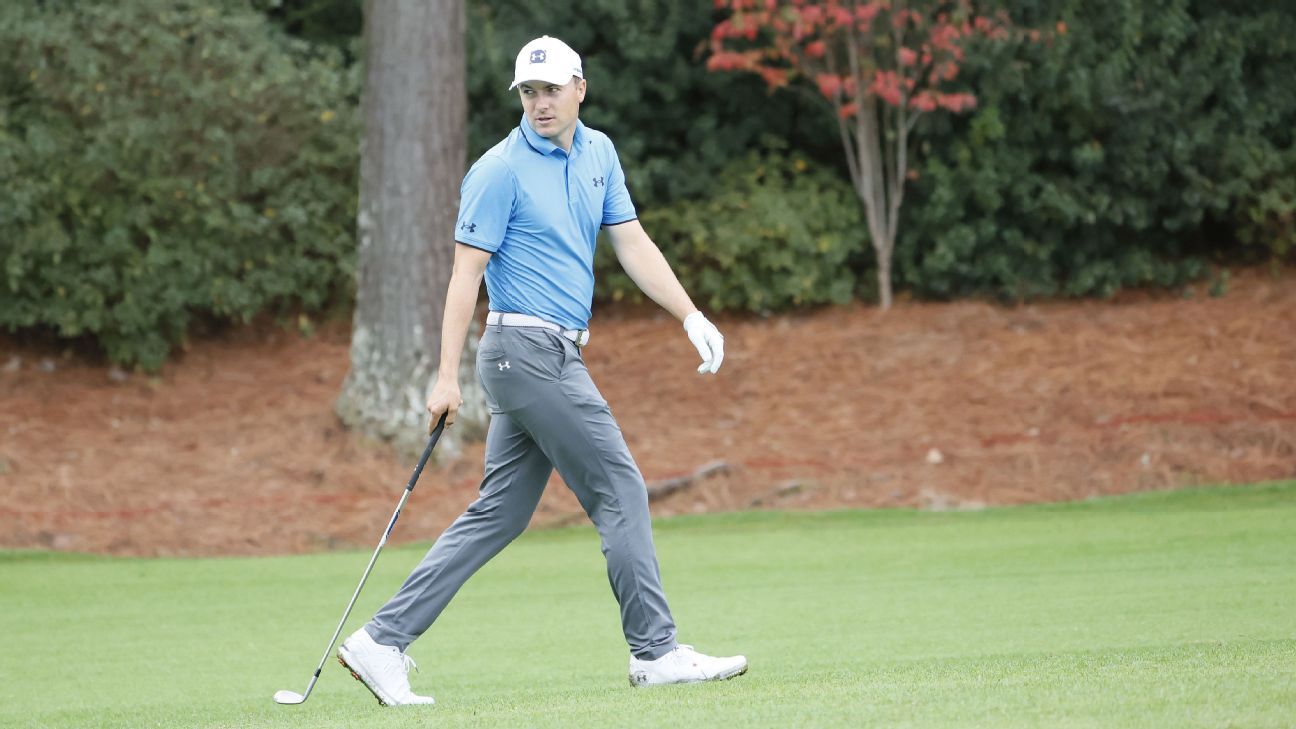 AUGUSTA, Ga. — Only five months since the last Masters Tournament another is here, back in its familiar April spot. Tiger Woods won’t be here as he continues to recover from injuries he suffered during a single-car crash in Los Angeles in February. But the patrons will return, in limited numbers. The players will find a different golf course than the soft one they experienced in November.

We go through the big storylines as the week of the 85th Masters begins.

The patrons are back. The Masters won’t say how many will actually be on site this week. What’s the biggest impact of having patrons back on property after having so few in November?

Bob Harig: The energy and atmosphere that spectators present, especially at Augusta National. As cool as it was to get to see all of the holes virtually unobstructed in November — remember, there were no gallery ropes — that got old after about a day. By Friday/Saturday, the tournament felt like a member-guest. It just wasn’t the same. Even limited spectators will make a good bit of noise that was sorely missing five months ago.

Michael Collins: Former ESPN colleague and current FOX Sports reporter Tom Rinaldi said it best to me when I asked him last year to describe the feel of Augusta National with no patrons. “The patrons are the soul of this place.” That’s all that needed to be said. Of course, it would be just as easy to describe it the way Paul Casey did: “It sucked.” The hope is there will be enough people on property that some roars echo throughout the grounds.

Mark Schlabach: You have to give Augusta National credit for making the November tournament as good as it possibly could be in such unusual circumstances. But I agree with Bob that it did feel like Dustin Johnson and his brother, Austin, were walking up the 18th fairway en route to winning a member-guest with such a small gallery. Patrons and their roars are what make the Masters so special, along with its tradition and scenery. Not having the full allotment of patrons there for a second straight year is deflating, but at least there will be more than were there five months ago. We’re making progress in getting back to normal.

Nick Pietruszkiewicz: It will make a huge difference, especially on the weekend. Even if the number is small, the noise will be heard. When players make a move on Saturday and Sunday, everyone will know. The pressure builds when the whole field knows an eagle was made at 15 or someone stuffed their tee shot at the par-3 16th. Going around in silence in November might have made it a bit easier on the nerves, especially for those chasing a first green jacket. Well, that’s gone. The heightened awareness, of not just yourself but the entire field and a particular moment in the tournament, will again play a significant role after a break in the fall.

Augusta National yielded low numbers in November. Will the course — and the tournament committee — get even now that the event is back in its usual spot in April?

Harig: If the hope is to have scores return to more normal levels — Johnson set the tournament scoring record at 268 — the Masters folks might not need to do a thing. As we have learned, getting the course firm and fast in November was difficult from an agronomical standpoint. Now we will see a course that has had the benefit of a full growing season. Look for the greens to be substantially firmer. Of course, rain is the great equalizer. If we can get a dry week, look out.

Collins: There are not many places in the world that could go toe-to-toe with Mother Nature. Augusta National Golf Club is one of the few. April in Augusta is not like November in Augusta. I expect a tougher course than we saw five months ago. We’ll keep our fingers crossed for no rain and a low pollen count. That way even if we only hit half the ask, we still win.

Schlabach: Good luck with the pollen, Collins. I’d advise you to wear shoes that you don’t want to take home, given how yellow the air has been the past couple of weeks in Georgia. You can’t diminish what DJ did in November, because I think he would have won his first green jacket in any conditions given how well he played. But the world’s greatest players were having target practice at Augusta National’s greens last year, which we had never seen before. Greens that traditionally hold very little were holding almost everything. They were as soft as Jerry Rice‘s hands. The fairways were understandably slower given the cooler temperatures and rain, while the juicy second cut presented some defense. I’d expect a much different course this time.

Pietruszkiewicz: Listen, the Masters Tournament committee is not the USGA. For sure, the green jackets probably didn’t like seeing Dustin Johnson hang 20 under on the place. But it won’t go all U.S. Open and trick the place out or turn off the sprinkler system. It’s not who the committee members are, it’s not what this tournament is. These caretakers know drama is a big part of the allure. They wants birdies and eagles around Amen Corner. But they also wouldn’t mind some balls taking a bath in Rae’s Creek. Drama, people, drama. If the rain stays away — sick of us talking about the weather yet? — Augusta National will be more difficult than it was in November. But this tournament has never been about inflicting pain.

A lot of players would like to do what Dustin Johnson did in November and get their hands on their first green jacket. Who has the best chance to do it?

Harig: Jon Rahm*. In four appearances at the Masters, he already has three top-10s, including a tie for seventh last year. Ranked third in the world, he contends often, with seven top-7 finishes on the PGA Tour, dating to his victory at the BMW Championship. *Disclaimer: His wife is due with the couple’s first child Masters week. But it seems just a matter of time before Rahm gets the first of a few major championships.

Collins: Justin Thomas. The best thing that could’ve happened to JT after winning the Players Championship was for him to get thumped in the first two matches of the WGC-Dell Technologies Match Play. Why? Because Thomas is a guy who plays great when he’s kind of angry. And he left the Match Play angry and ready to grind. His game will be primed for the Masters and his first green jacket.

Schlabach: Am I going to bite on the Xander Schauffele bait again? He has been runner-up eight times since winning the Sentry Tournament of Champions in January 2019. That includes a tie for second at the 2019 Masters, when he led the field with 25 birdies. Schauffele has figured out Augusta National; six of his past eight rounds have been under par. He always shows up on the game’s biggest stages, with seven career top-10s in majors. It’s just a matter of closing the door and getting it done.

Pietruszkiewicz: There are so many choices, which speaks to the depth right now in golf. There is, as mentioned, Rahm and Thomas. Throw in Rory McIlroy and, if he is healthy enough, Brooks Koepka. There are young guys, like Collin Morikawa, Matthew Wolff and Viktor Hovland. And, of course, you cannot have any conversation about this sport without Bryson DeChambeau. But I’m going in a different direction and saying maybe, just maybe, after so many close calls lately, Lee Westwood gets that big win he’s been waiting his entire professional life to get. At age 47, with fiancée Helen Storey on the bag, he’s happy. (Storey, though, is off this week with Westwood’s son, Sam, alongside.) Westwood posted a pair of runners-up finishes at the Arnold Palmer Invitational and the Players. He knows his way around the place; this is his 20th start. He’s been close a few times, finishing second in 2010 and 2016. So … why not now?

Which past champion are you expecting a big week from this week?

Harig: Dustin Johnson. There’s no reason why he can’t pick up right up where he left off in November. DJ, after a rocky start in his first five tries at Augusta National, has figured the place out and has been in the top 10 in each of his past five appearances, with a tie for second and a win. He’s had a minor blip in his game in his past few tournaments, but expect him to be there again.

Collins: Jordan Spieth. It’s been a journey, but now we know why — a bone chip in his left hand. Unless you’re a Jordan Spieth hater, and I’ve yet to meet one, no one will be surprised when his name finds its way on or near the top of the leaderboard heading into the weekend. I also think when that happens, Spieth will remember how to finish at Augusta National

Schlabach: Jordan Spieth. He is striking the ball as well as anyone in the world right now. He just needs to continue to stay steady off the tee and play better on Sunday.

What is the biggest surprise of the week?

Harig: Nobody is going to give Rory McIlroy a chance. A lot of frustrating results lately. Hasn’t won since the fall of 2019. And just a few weeks before the Masters, he changes coaches? McIlroy brought respected instructor Pete Cowen onto his “performance team” the week of the Match Play, a move that suggests a more long-term approach. But McIlroy is not that far off. He still drives it great. While his wedge play has given him fits, it also seems like something that can be sorted out with Cowen’s help. Too soon? Maybe. But it’s not like Rory has been awful. Typically, putting will be the big issue for him.

Collins: Ian Poulter has never finished inside the top 5. In fact, in 15 appearances, the flashy Brit has only had three top-10s. This year will be different. There’s a new laid-back, fun appeal to Poults. Maybe it’s his social media. Maybe it’s because it’s a Ryder Cup year. Regardless, Ian Poulter will have a chance to win going to the second nine on Sunday and will finish inside the top 5 for the first time in his career.

Schlabach: DeChambeau says he is going to play Augusta National as a par-74 course. That’s the only way he can possibly get even with the golf gods after last year’s shenanigans, when he said it was a par 67 for him. Hopefully, he’ll spend less time working with 48-inch drivers on the range and more time on trying to figure out how to hit the fairways and greens.

Pietruszkiewicz: Again, I’m agreeing with someone. I cannot stand when that happens. DeChambeau won’t be a factor — again. Who knows, I could be colossally wrong, as I was when I said his swing-for-the-fences approach couldn’t possibly work at Winged Foot. (Editor’s note, from myself: Whoops!). But one does not force its will on Augusta National. Players have to pick and choose their spots, when to take risks and when to play safe. DeChambeau, it seems, is still pushing forward. In the past, he’s referenced himself as being a casino. He’s all-in again, refusing to alter the approach that went sideways here in November. It just feels like this is the place where it won’t work.