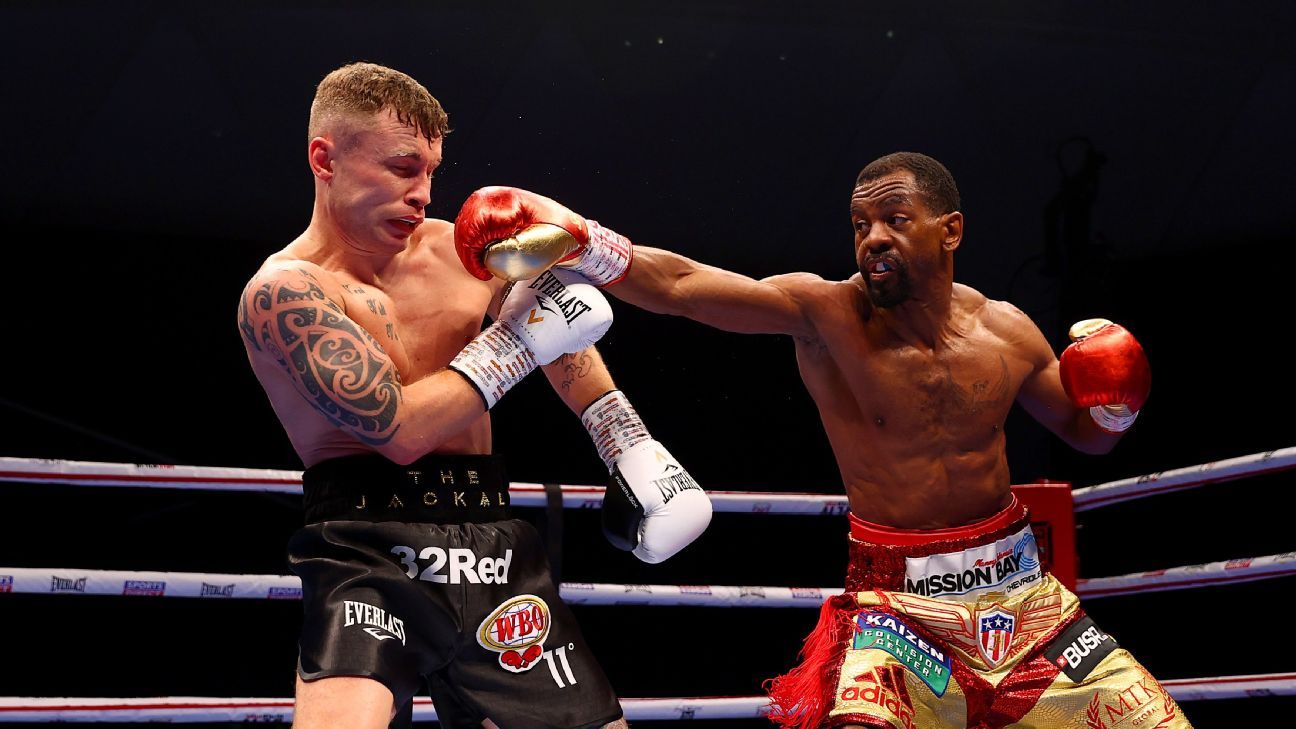 Herring fought to a career-best win as he thwarted Frampton’s attempt to become the first Irish boxer to win world titles in three weight divisions. Afterward, an emotional Frampton announced his retirement.

Herring shrugged off a nasty cut on his right eyelid to produce a polished performance as he controlled the distance against his shorter opponent, who was stopped after hitting the canvas in the fifth and sixth rounds.

Herring (23-2, 11 KOs), 35, celebrated his achievement without the presence of any fans due to coronavirus restrictions at Caesars Palace Dubai in Dubai, United Arab Emirates.

A 2012 Olympian originally from Long Island but now based in Cincinnati, deserved to hear cheers for his achievement, the latest chapter of a late blossoming career. Afterward, he said he hoped to unify belts against Mexico’s Oscar Valdez, the WBC champion and ESPN’s No. 1-ranked fighter in the division.

“I want to get another title,” Herring said. “I know Oscar Valdez has expressed interest in unifying. Most people know I have plans in moving up [in weight], but if that fight is available let’s do it.”

But while Herring looks forward to bigger fights, 34-year-old Frampton (28-3, 16 KOs) is hanging up the gloves after a third professional defeat in a division with opponents that are too big for him. Frampton finishes after winning world titles at junior featherweight and featherweight, which is enough for some to consider him the best boxer in Irish history regardless of whether he became a three-weight world champion against Herring.

“I’m deeply upset,” said Frampton, who said he wanted to dedicate the fight to his old amateur coach, Billy McKee, who died recently. “I said before the fight I would retire if I lost this fight and that’s exactly what I will do. … I want to dedicate my life to my family now. Boxing has been good to me. It has also been bad to me. The last few years have been the best of my career.”

If there were any doubts around Frampton’s quest to make history, they were based on Herring’s physical advantages over him. They turned about to be valid concerns as Frampton failed to impose himself against the biggest opponent of his career.

Herring is 5 inches taller than Frampton and has a 7-inch reach advantage.

“I lost to the better man,” Frampton said. “I really struggled to get inside him. … It’s zero excuses. I had an amazing camp.”

Frampton questioned how well Herring made weight for their fight, but the American looked a lot sharper than he did in his previous outing against Jonathan Oquendo in September, when Herring won after Oquendo was disqualified because of an illegal head-butt.

“It was an emotional roller coaster just to get here,” Herring said. “My last outing wasn’t the best. People called me every name in the book, people doubted me but even with the cut I wasn’t going to quit.”

In the opening round Saturday, Herring contained Frampton behind his long jab and also landed a good left. In the second round, Herring continued to dictate the fight as Frampton struggled to get inside the American’s jab.

Frampton was knocked back on his heels by a straight left early in the third as Herring controlled the early rounds by controlling the distance.

Frampton was better when the fight was fought at close range as it was in the fourth and he unloaded hooks with Herring against the ropes. The attack opened up a cut by Herring’s right eye for the second successive fight, and he finished the round with blood streaming down his face.

Frampton had not fought anyone as big as Herring before and by the fifth round he was looking more confident.

But Frampton was stopped suddenly in his tracks after walking on to a left hand and was deposited on his backside for a count.

Frampton looked vulnerable for a while, but Herring did not capitalize until the sixth round, when he nailed his challenger with a left uppercut for another count.

Herring went for the finish this time with more than a minute left in the round and a series of hooks left the Ulsterman on shaky legs, prompting his corner to throw in the towel and the fight to be stopped.

“It’s tough to see any champion of the sport go out like that, I’m honored to share the ring with him,” Herring said.

Herring trained alongside ESPN’s pound-for-pound No. 1 Terence Crawford ahead of this fight. A former U.S. Marine, Herring made his first trip to the Middle East since he was on the second of two tours to Iraq.