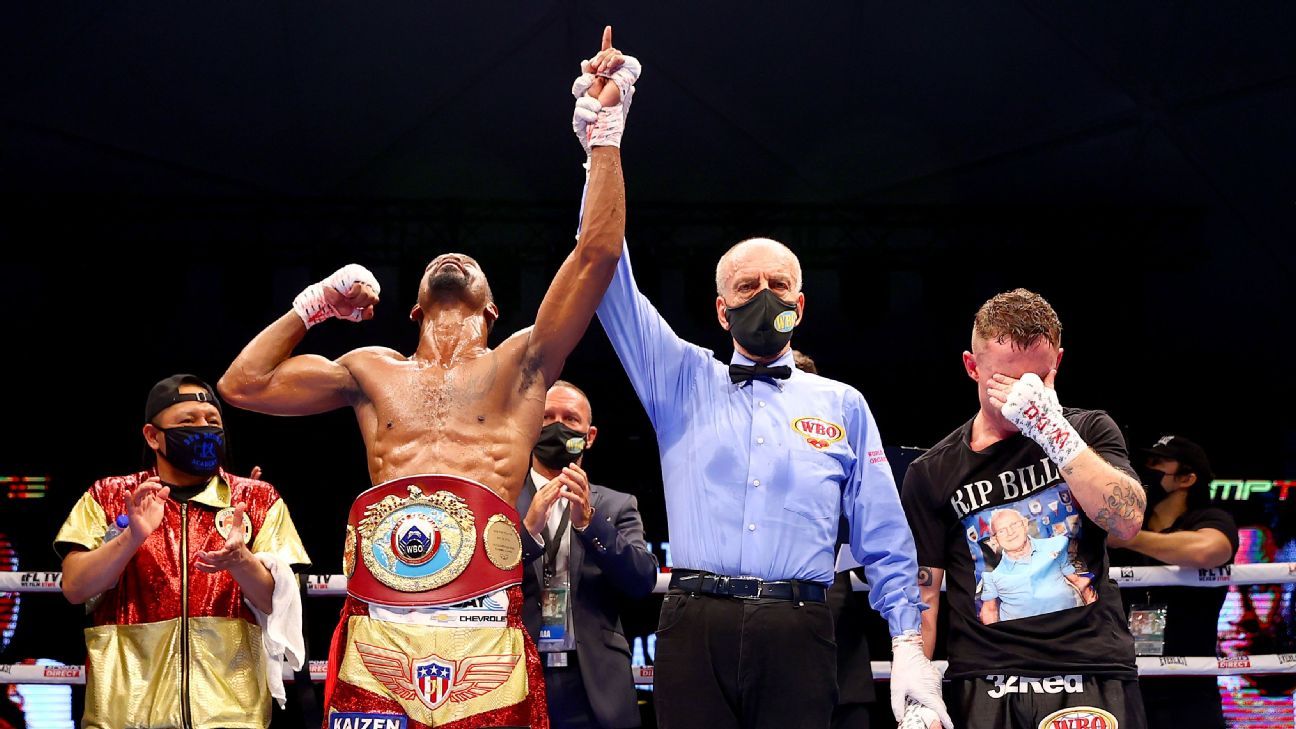 In a crossroads fight for Jamel Herring and Carl Frampton, the winner was left looking forward to a world title unification fight while the loser looked back on a successful career after announcing his retirement.

Herring (23-2, 11 KOs) felt he needed to produce a must-see performance against Frampton after a poor showing against Jonathan Oquendo in September. He also wanted to reinforce his claims to be recognized as one of the best fighters at 130 pounds.

Herring did just that, flooring Frampton twice in a sixth-round TKO win for a third defense of his WBO world junior lightweight title at Caesars Palace Dubai in Dubai, United Arab Emirates, on Saturday.

Frampton (28-3, 16 KOs) had a tremendous career, but after he failed it to win a world title in a third weight class, he called it quits.

How did Herring win the fight?

The former U.S. Marine fought a disciplined fight, only really getting drawn into close-quarter exchanges in the fourth round.

Herring controlled the distance, boxed behind his long jab and Frampton could not handle the power behind Herring’s punches. Herring mixed it up too, and uncorked a sweet left uppercut to drop Frampton for the second time. He then finished in clinical style, unloading a series of hooks that shook Frampton and prompted his trainer Jamie Moore to throw in the towel. It was a sensible call from Moore as Frampton had struggled to get into any rhythm while Herring began landing with increasing accuracy and power.

Herring, who dropped Frampton with a straight left in the fifth round, outlanded Frampton 66-39 in total punches, and 55-35 in power punches according to CompuBox. He looked sharp — there was certainly no evidence that he had been slowed down by COVID-19, which he contracted last summer. Not even a nasty cut on his right eyelid, sustained in the early rounds, could knock off Herring from his smooth execution of a gameplan to make the most of his physical attributes: Herring was five inches taller and had a seven-inch reach advantage.

Mark Kriegel details what’s next for Jamel Herring after his victory over Carl Frampton.

At an age when many careers are winding down, the 35-year-old Herring is just getting started.

Herring’s first knockout win since May 2018 was a career-best victory against a two-weight world champion who had conquered the likes of Leo Santa Cruz and Nonito Donaire. Beating someone of Frampton’s class, after winning the title with a unanimous decision win over Masayuki Ito two years ago, underlined Herring’s credentials as a top 130-pounder

As Frampton was new to junior lightweight, Herring still needs to do more to be considered the best in the division, but this win puts him at No. 2 in the division behind only Oscar Valdez.

With Gervonta Davis facing troubles out of the ring, and perhaps staying at lightweight, Valdez (29-0, 23 KOs), the WBC titlist, is the man to beat after his impressive 10th-round knockout of Miguel Berchelt in February. Valdez was the name Herring mentioned after his win, and a title unification fight may be more appealing than facing a fast, fresh 23-year-old Shakur Stevenson (15-0, 8 KOs).

Herring will have similar height and reach advantages over Valdez as he did over Frampton. That might be another reason why Herring fancies Valdez more than Stevenson, his No. 1 challenger with the WBO governing body and also a friend. According to the WBO, Herring must declare in the next 30 days that he will defend the title next against the winner of the Stevenson vs. Jeremiah Nakathila fight on June 12.

What is Carl Frampton’s legacy?

Frampton’s legacy was already secure before he stepped into the ring on Saturday at an empty venue thousands of miles from his native Northern Ireland.

Frampton has been one of Northern Ireland’s most popular sports stars for almost a decade, along with golfer Rory McIlroy. Despite failing to become the first Irish three-weight world champion, his achievements put him as one of the best Irish boxer in history, along with Barry McGuigan, Steve Collins, Wayne McCullough, Rinty Monaghan, Jimmy McLarnin, and Nonpareil Jack Dempsey.

After beating Quigg by split decision in Manchester, England, “The Jackal” then stepped up a division to win a majority decision over Santa Cruz. Frampton was brilliant in that fight, picking off the then three-weight world champion with his fast flurries of punches. That fight will be remembered as Frampton’s biggest win of his career.

Other memorable nights included beating Kiko Martinez for his first world title in 2014 at a 16,000-temporary stadium on the spot where the Titanic was built. Frampton lost a rematch by a majority decision to Santa Cruz in Las Vegas in January 2017, but he revived his career with a dominant points win over Nonito Donaire a year later.

Frampton has persevered in the ring, thrived against the best and now heads into a retirement well-earned.