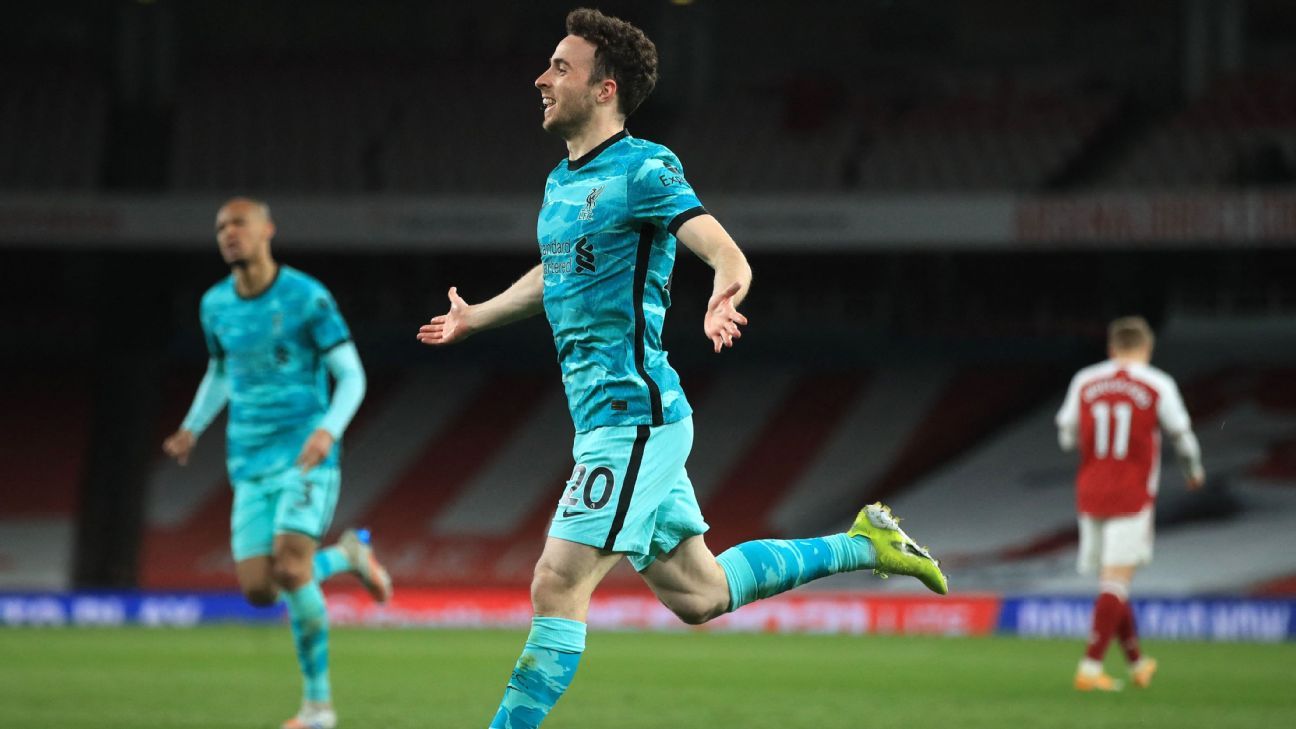 LONDON — They are not the absentees most often rued during a season Liverpool find themselves needing to rescue, but Diogo Jota and Fabinho provided a useful reminder on Saturday of what Jurgen Klopp’s side have been missing.

The Reds were utterly dominant in easing to a 3-0 win over a dreadfully poor Arsenal side, but only after Jota added potency to a performance Fabinho set the tempo for. This was Liverpool’s best collective display since routing Crystal Palace 7-0 in December and one that must have felt somewhat cathartic after their recent travails.

Klopp’s side move to within two points of fourth-placed Chelsea and can embark upon a Champions League quarterfinal against Real Madrid in addition to the Premier League run-in with renewed optimism after rediscovering the authority that made them champions. Troublingly for Arsenal, this was a throwback to their old selves, too, but more of that later.

“It was a very important statement for us,” Klopp said after the match. “We need to show that we fight for it, we cannot talk about it, we have to show it on the pitch. In our situation, it is clear. All the things that have happened to us in the past in this season brought us to a position where we don’t have it in our hands. We have to win our games and somebody else has to lose. We have to make pressure on them and that’s what we did tonight. We have to fight and we will fight.”

The Gunners were only level after more than an hour because of Liverpool’s inability to make their superiority count, an affliction that goes a long way to explaining why the visitors are now scrambling to finish in the top four. Despite controlling the game with Fabinho and Thiago pulling the strings in midfield, the game was goalless on the hour mark when Klopp introduced Jota for Andrew Robertson and switched James Milner to left-back. Milner had wasted the visitors’ best chance to that point, side-footing wide when found by Trent Alexander-Arnold on the edge of the box.

The sense of reminding others what they were missing extended to Alexander-Arnold, who responded to his surprise omission from Gareth Southgate’s latest England squad with a focused display brimming with quality, exemplified by his stunning pinpoint cross for Liverpool’s opener. Jota met his whipped delivery from the right with a header Bernd Leno could not keep out, and from there they threatened to run riot.

Fabinho released Mohamed Salah, who evaded Gabriel’s weak challenge to bear down on goal from a tight angle. He aimed for the only part of the goal he could really see — between Leno’s legs — and steered a cute shot through the gap to double their advantage.

Jota now has 18 goals for Liverpool and Portugal this season, a return made all the more impressive given this is his first season at the club following a £41 million transfer from Wolverhampton Wanderers and he missed a big chunk of the season between Dec. 10 to March 4. This was also only Fabinho’s sixth outing since Jan. 24, yet he made more tackles (six) than anyone else on the pitch with Thiago (92%) the only outfield Liverpool player to register a higher pass completion rate than his 89%. It feels almost criminal on nights like this to think he has had to fill in at centre-back.

“We are slightly used to [not scoring early on]. It is our year, if you like; we have not scored with our first chances,” Klopp told Sky Sports. “[Milner] didn’t score with a sitter pretty much. He thought the same! We have to work hard and try more often and all these kinds of things. Obviously we brought on Diogo [Jota], who is in very good shape. He stretched things. He played lots for Portugal, that is why he didn’t start.”

Arsenal simply could not compete. They had only lost one of their four meetings with Liverpool under Mikel Arteta, and the Spaniard had suggested before this that he wanted his team to win through a more assertive, expansive style than the contain-and-counter approach that yielded past success. What followed instead was a brutal lesson in just how far from that goal they are.

“I don’t know if it was the worst [performance of my tenure] but probably one of the worst and the one that really shocked me,” Arteta said. “It leaves us in a position that we have to apologise for what we have done on the pitch today. I don’t care who is missing, that is excuses. The international [break] is excuses and I hate excuses.

“They were much better than us in every single department. And they fully deserved to win the match by a bigger margin. I am fully responsible for that. The rest, about one player [missing], two players, three players, is just excuses.”

The strong suspicion remains that Granit Xhaka is not good enough for a team aspiring to be Champions League regulars, yet they missed his range of passing in central midfield. With David Luiz also unavailable — Arteta revealing after the match that the club is evaluating whether surgery will be necessary for the 33-year-old’s knee injury — the Gunners did not possess a player able to pick an early long pass to help beat Liverpool’s relentless press. Instead, they simply turned over possession cheaply, exemplified by Gabriel’s wastefulness for Liverpool’s third goal. He gave the ball away 19 times, a number matches by Calum Chambers.

Losing Kieran Tierney to injury on the stroke of half-time following a clash with Milner was unfortunate, and it felt significant that the first two goals came down the channel the Scotland international had been patrolling. It was also telling that Arteta withdrew captain Pierre-Emerick Aubameyang when Arsenal were losing for the second game running. The task here did not suit him, it must be said, being asked to do so much defensive work out on the left flank, but he cannot remain on the periphery for too much longer given what is at stake this month.

Arsenal’s season now hinges on their Europa League quarterfinal tie with Slavia Prague, the first leg of which takes place at Emirates Stadium on Thursday. Fresh energy will be required with Bukayo Saka and Emile Smith Rowe likely candidates to return. Arsenal need both the exuberance and quality of their youth.

Liverpool still have an active fight on two fronts despite an appalling recent record at home and the ongoing absence of key defenders including Virgil van Dijk and Joe Gomez. And the signs suggest they are starting to regain enough squad depth to make both challenges competitive at the very least.