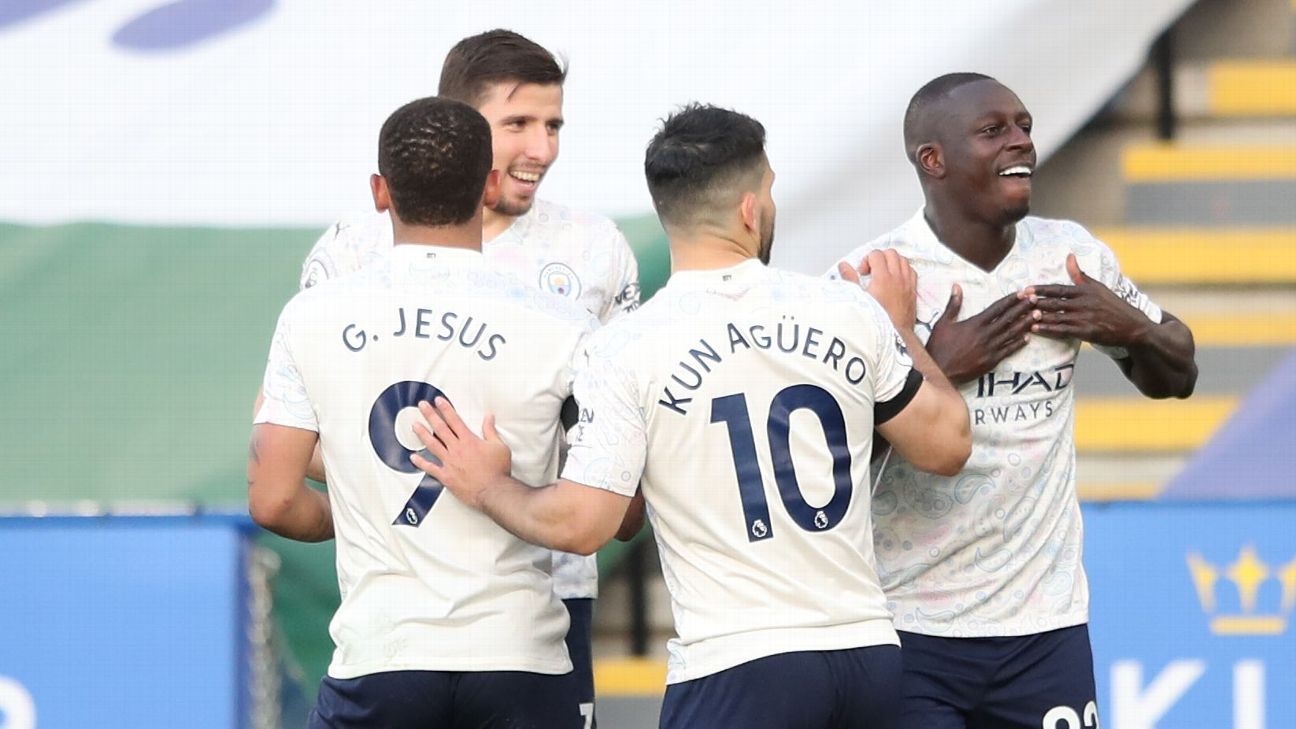 LEICESTER, England — The day before Manchester City moved three points closer to the Premier League title with a 2-0 win at Leicester, Pep Guardiola had the rest of football breathing a sigh of relief when he said that his club cannot afford to sign a world-class striker as replacement for the departing Sergio Aguero.

Frankly, if Erling Haaland or Harry Kane are not wearing a City shirt next season, the rest might still have a chance. Time will tell if Guardiola gave a genuine reflection of reluctance to break the bank for the likes of Borussia Dortmund’s or Tottenham’s star striker, or whether the comments were tactical and designed to distract their rivals in the transfer market.

But whatever Guardiola’s intentions, the general sense of supporters around the world would have been: “Who are you trying to kid?” Make no mistake, it would be a gamble on City’s part if they have not signed a proven goal scorer by the time next season comes around. And that is whether or not they are able to lure Lionel Messi to Manchester.

If Haaland or Kane become available, it will almost certainly take bids in excess of £150 million for either of them before their current clubs would even consider a deal, so the City manager’s insistence that the economic impact of the COVID-19 pandemic has put them out of the running may be rooted in cold reality.

Although victory at the King Power Stadium moved the champions-elect 17 points clear of second-place Manchester United (who have two games in hand) and within four victories of sealing the title, another reality was highlighted: While City might not be able to afford Haaland or Kane, they really cannot afford not to sign a striker of such calibre.

Former United forward Romelu Lukaku, now scoring regularly at Inter, and Eintracht Frankfurt‘s Andre Silva, whose game-winning header boosted his side’s Champions League hopes at Dortmund’s expense on Saturday, have also been linked with a move to the Etihad Stadium, perhaps as less expensive options than A-listers such as Haaland and Kane.

Guardiola made the valid point on Friday that his team is contending for four major trophies, despite Aguero being unavailable for large parts of the campaign due to injury and a period recovering from COVID-19. City have played with a false nine on several occasions and Gabriel Jesus has often been overlooked, even when Aguero has been out of action.

Aguero is City’s record scorer with 257 goals, but the 32-year-old’s injury problems mean he cannot be considered as prolific as he once was. Jesus, meanwhile, is simply not an elite striker. The Brazilian international is industrious and quick, but does not score enough goals, especially in a team that creates so many chances.

Despite the lack of a reliable striker, City have dispelled the old convention of needing a 20-goal striker to win a title — Aguero has played the role most seasons since his arrival from Atletico Madrid in 2011, but has just one in the league this season, while Jesus’ tally at Leicester was his eighth — and have blown away the competition in England to close in on a fifth title in 10 seasons.

But while Ilkay Gundogan is the leading league scorer with 12, can City win with the same formula next season, without a focal point to their attack? Perhaps, but just imagine how formidable they would be if they added a Kane or a Haaland to the team.

Saturday’s win was set up by another unlikely source, as a second-half goal from left-back Benjamin Mendy opened the scoring — Jesus made the points safe on 74 minutes — and it has become a trend for Guardiola’s defenders or midfielders, rather than forwards, to make the breakthrough in recent weeks.

Not since a 1-0 win at Arsenal in February has an attacking player — Raheem Sterling on that occasion — scored the decisive goal. Instead, it has been a season when City’s match-winners have been the likes of Gundogan, Kevin De Bruyne and even John Stones.

“I am delighted the way [Aguero] trained this week, nothing is going to change, Guardiola said to Sky Sports after the game. “Maybe one day we will need the one goal to win something and he will be there.”

This week’s often-played images of Aguero’s title-winning goal against QPR serve as a reminder that he might indeed deliver in a big moment, as could Jesus when it matters most. But the duo has been found wanting too often, which is why City must find a way to fund a move for Haaland or Kane, or Lukaku or Silva.

Aguero signed for £38m from Atletico Madrid and, 10 years on, such a major outlay at the time has been repaid many times over. There may not be a similar return on Kane, who turns 28 this summer, but £150m for 20-year-old Haaland could prove to be a bargain.

Although City’s matchday squad at Leicester cost a total of £789 million, their record signing is a relatively modest £64.3 million for Ruben Dias, so perhaps Guardiola will turn out to be right and the soon-to-be champions will not contemplate breaking the £100m barrier to sign any player.

There are many good football reasons for them to do so, though, both to boost their hopes of further success and to provide a nightmare scenario for their rivals.