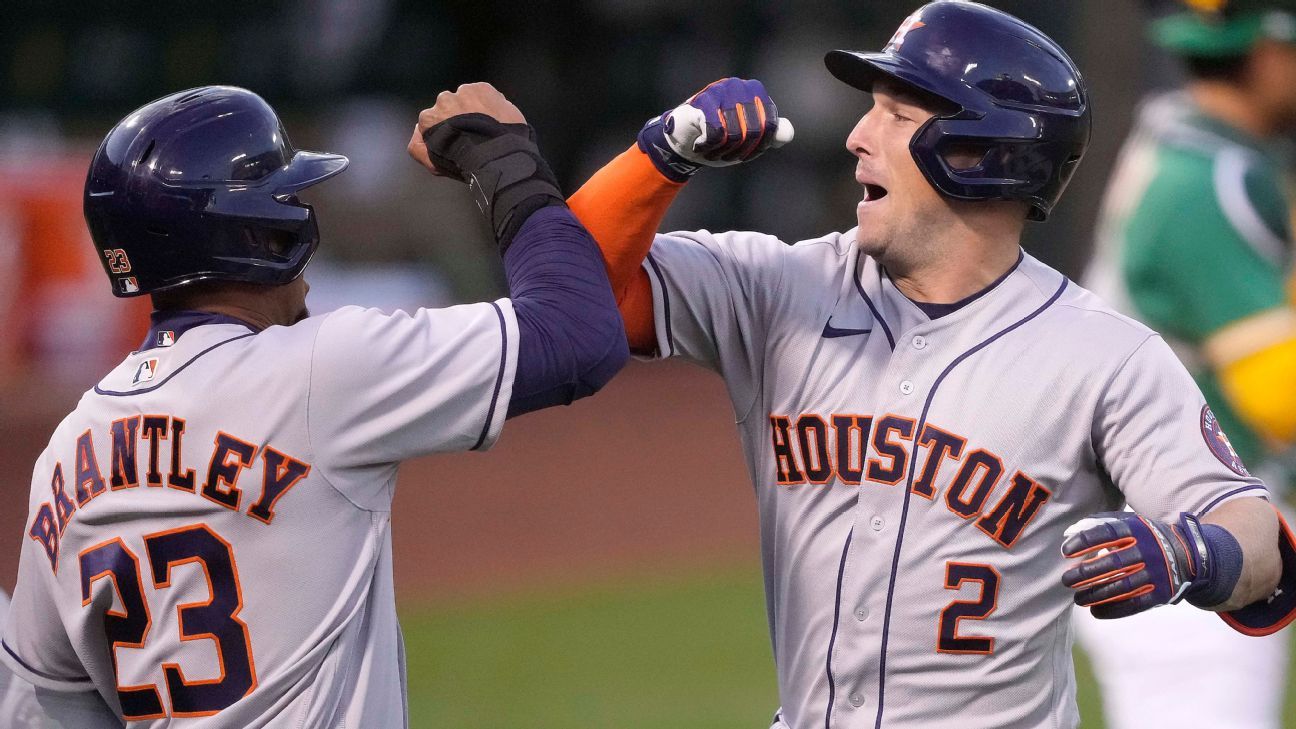 We had a lot happen the first four days of the 2021 MLB season. The Reds and Cardinals had the first bench-clearing incident of the season. The Dodgers’ Cody Bellinger lost a home run when he passed Justin Turner on the basepaths. White Sox rookie designated hitter Yermin Mercedes set an MLB record by starting the season with hits in his first eight at-bats. Corbin Burnes and Jose Berrios locked up in a great duel on Saturday night, the first time in modern history both starting pitchers allowed no hits with at least 11 strikeouts through six innings. The Mets and Nationals, of course, had their entire series postponed due to a COVID outbreak on Washington.

Here are some observations from the opening weekend of action:

Alex Bregman hit .500 in the four games with two home runs and Jose Altuve hit .375, to name two players who saw their numbers dip in 2020, but the biggest positive is the return of dangerous Yordan Alvarez, who was so good as a rookie in 2019 before surgery on both knees wiped out his 2020 season. He homered on Saturday and just missed another homer with a double off the wall in the opener. If he’s a force in the middle of the lineup, this could still be one of the best run-scoring teams in the league, even with the loss of George Springer.

And it doesn’t hurt to send a message to the A’s, who went 7-3 in the regular season against Houston last season, holding the Astros to just 25 runs in 10 games. The Astros then beat the A’s in four games in the division series, so perhaps the message is this: The A’s may be the reigning AL West champs, but Houston may still be the team to beat.

2. The other opening statement came from the Phillies, who swept the Braves in three games, holding an Atlanta offense that was second in the majors in runs scored in 2020 to just three runs. With apologies to Burnes and Berrios, the most impressive outing so far was Zack Wheeler‘s performance on Saturday, when he allowed one hit in seven innings with no walks and 10 strikeouts (and went 2-for-3 at the plate with two RBIs).

Wheeler had an interesting debut season with the Phillies, going 4-2 with a 2.92 ERA and allowing just three home runs in 71 innings, although his strikeout rate fell from 23.6% to 18.4%. The relatively low strikeout number didn’t bother me since he seemed to become more of a pitcher instead of a thrower, inducing soft contact and working efficiently. Against the Braves, he showcased his plus fastball location, firing a four-seamer that hit 99 mph at the top of the zone and then an upper 90s sinker at the knees. He fanned Marcell Ozuna three times swinging: first on a 97 mph sinker low and in, then on another 97 mph sinker in a similar location, and then on a 97 mph four seamer up in the zone. After whiffing on the two sinkers, Ozuna had no chance against the high heat. In the first inning, after Ronald Acuna fouled off a tough 2-2 slider, Wheeler fanned him on a 99.4 mph fastball at the top corner of the strike zone. Perfect location, unhittable pitch.

3. On the other end of the spectrum are the Red Sox, who were swept in three games at Fenway by the supposedly lowly Orioles. I watched the opener and John Means was terrific on a cold day, keeping Boston off-balance with, as Bill James put it on a Twitter, “pitching like a 1970s Baltimore/1980s KC pitcher … a crafty left-hander who never heard of a high fastball.” OK, but then Baltimore won 4-2 and 11-3 — behind Matt Harvey, who had a 7.82 ERA the past two seasons, and Bruce Zimmermann, a rookie lefty making his second career start.

Are you ready for MLB Opening Day? Here’s everything you need to get up to speed for a new season on the diamond.

Who could pass Trout? | Excitement guide

Look, it’s three games, so we can’t overreact here, but this is such a weird Red Sox roster. They are trying to following the Rays model of positional flexibility, so Chaim Bloom signed the likes of Enrique Hernandez and Marwin Gonzalez, but there is also what I call a lot of “hope” players. You hope J.D. Martinez bounces back. You hope Hunter Renfroe can make enough contact after hitting .216 and .156 the past two seasons. You hope Franchy Cordero learns the strike zone and that Bobby Dalbec can hit in the majors. You hope Garrett Richards is healthy and effective (he got roughed up on Sunday), that Nick Pivetta is useful, that Alex Cora can figure out the bullpen. It just feels like a little too much hope is required for things to work out. But … it’s a long season.

As for the Orioles, “It’s just a great confidence booster for this team, and I think we’re going to surprise a lot of people this year,” Zimmermann said. “So this is just the start.” Dream while you can, Orioles fans.

4. So who is Yermin Mercedes? He’s a 28-year-old rookie who played mostly catcher in the minors, got one at-bat in the majors in 2020, then went 5-for-5 in his first career start on Friday and got hits in his first three at-bats on Saturday. Mercedes is getting a chance due to play due to Eloy Jimenez‘s injury, as projected DH Andrew Vaughn started in left field both games with Mercedes at DH. Here’s the thing: Despite having a bit of a vagabond career — he signed originally with Washington, went to Baltimore and then the White Sox got him in the 2017 Rule 5 draft — Mercedes can hit. He’s a career .302 hitter in the minors and hit .317/.388/.581 with 23 home runs in 95 games in 2019 between Double-A and Triple-A. It will be interesting to see how Tony La Russa sorts this out as Vaughn isn’t really a left fielder. Once Adam Engel is healthy from his strained hamstring, he may be the best fit in left field with his speed, and Vaughn could conceivably end up in the minors if the White Sox believe in Mercedes’ bat.

5. The Blue Jays may have found a closer to replace the injured Kirby Yates in 29-year-old rookie Julian Merryweather, who has pitched just 19 innings since he was a starter in the Cleveland organization back in 2017. Merryweather finished out the 3-2, 10-inning Opening Day win over the Yankees, striking out the side on 11 pitches with the tying run on second base. He also closed out Sunday’s 3-1 win, striking out two of the three batters he faced and again needing just 11 pitches.

Acquired from Cleveland as a throw-in in the Josh Donaldson rental trade in 2018, Merryweather missed all of 2018, pitched six innings in 2019 and 13 innings for the Blue Jays in 2020, although he was shut down at the end of the season with elbow tendinitis. He sits in the upper 90s with his fastball, hitting 100.4 mph on Sunday on a pitch to Gary Sanchez, while mixing in a slider and changeup. It’s knockout closer stuff.

6. While Burnes ended up losing that game to Berrios and the Twins when Byron Buxton broke up his no-hitter with a home run, his dominant performance is an early indicator that his 2020 numbers (2.11 ERA, 59.2 IP, 37 H, 2 HR, 24 BB, 88 SO) were not a fluke. Burnes threw 42 cutters against the Twins, using that pitch as his primary fastball offering, and he averaged 96 mph. Batters hit just .162 against it in 2020 without a home run, and while Buxton’s home run did come off a cutter, it’s the pitch that keyed Burnes’ improvement last season. His outing only reinforced my belief that he and Brandon Woodruff can be one of the best 1-2 combos in the majors.

7. Julio Urias closed out the Dodgers’ World Series last year, but he’s back in the rotation and many in the game believe this is the year he’s finally going to break out: no innings restriction, no COVID, just go out and pitch. He beat the Rockies on Sunday at Coors Field, allowing three hits and one run in seven innings. The best part: He threw just 79 pitches. Not bad for your No. 4 starter.

8. The Padres took three of four from the Diamondbacks, but one early concern: Fernando Tatis Jr.’s defense. He has five errors in four games, including throwing and fielding errors on Sunday. That’s after making just three errors in 57 games in 2020, when his range metrics were top of the charts. Remember, after his rookie season in 2019, there was some talk that his erratic play at shortstop might mean he would eventually end up in center field, but he erased those thoughts with his great defense last season. The error issues could be related to the left shoulder injury he had at the end of spring training, or maybe just some early-season jitters. Worth watching, however.

9. I didn’t mind the extra-inning runner-on-second rule last season. I think we were all so happy just to have baseball at all that we lived with the special rules. One thing that surprised me is that most managers didn’t seem to mind it — or even actually liked it. Here’s what the Phillies’ Joe Girardi said about it during the offseason: “I was probably a little leery of the strategy of the extra innings, but it kind of ironed itself out and I like it. I think it’s a good rule. Too many times, you have to make too many changes on your roster because you get in a really long game and that upsets your roster for the next 10 days. So I’m really favor of that one.”

However … after watching four games on Opening Day decided thanks to the runner-on-second rule, I don’t know. It didn’t feel right. I understand what Girardi is alluding to and you can argue that the rule rewards the team that can figure out how to scratch across a run, or rewards bullpen depth. At the minimum, I would prefer to wait until at least the 11th or 12th inning before you go to it.

10. One of the stories to monitor throughout the season is the new ball, which will supposedly travel a couple of feet fewer on a typical 375-foot fly ball. How much of a difference will it make? The early, early, early returns (heading into the Sunday night game) as compared to the past two season-opening weekends:

Again, it’s early. April usually has lower offensive numbers. Fourth and fifth starters have yet to make their first starts of the season, and pitcher attrition will lead to more inferior pitchers getting called up. The early call: Home runs will go down a bit. Stay tuned.