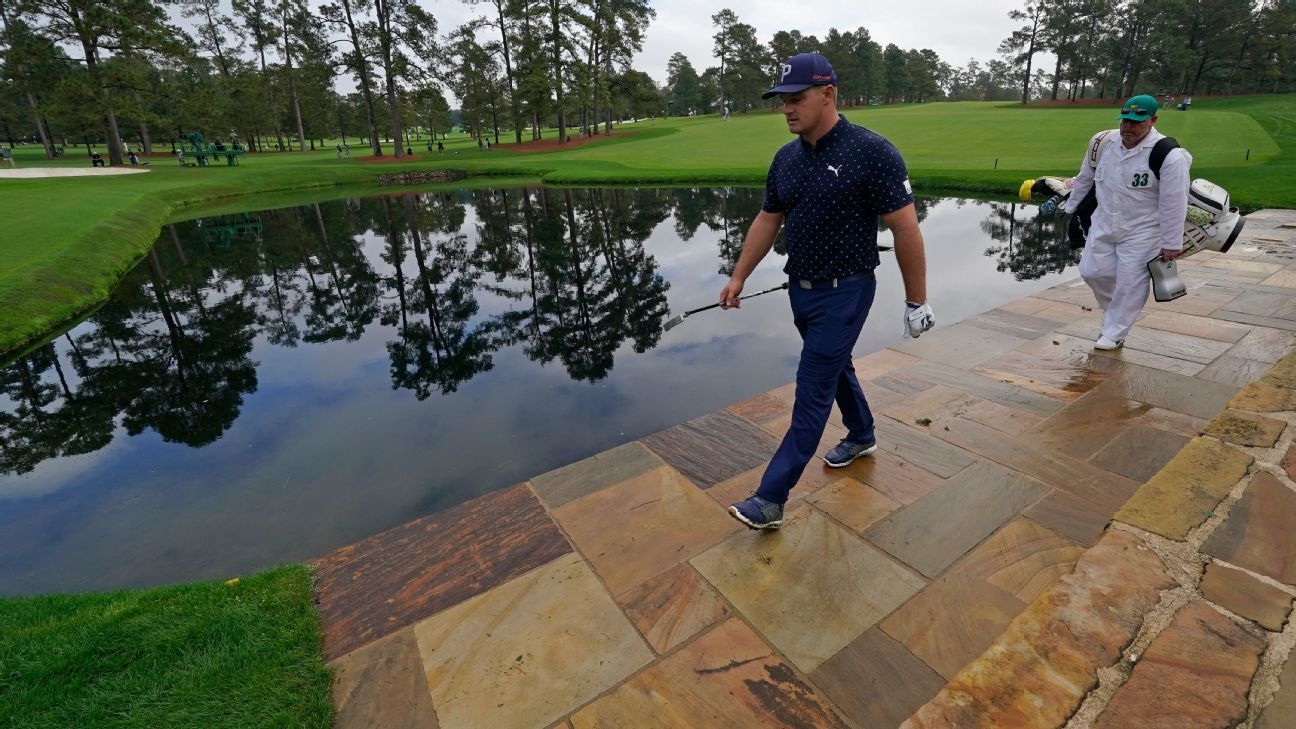 AUGUSTA, Ga. — Bryson DeChambeau was going to obliterate Augusta National last fall. He was coming off a convincing 6-shot win at the U.S. Open, overpowering famed Winged Foot. He arrived at the Masters with a plan to do the same.

But a funny thing happened on the way to a green jacket.

DeChambeau hit it far at Augusta, but wide. The underrated short game that also had helped him at Winged Foot let him down. He did make 18 birdies and an eagle on the week — that’s 20 under par, which was the record-setting winning score by Dustin Johnson. But … DeChambeau also made 11 bogeys, two doubles and a triple.

“The stress of the tournament, just the spotlight, the whole thing,” he said. “It all took a toll. It was a combination of a few things that escalated my brain.”

And now he is back again, a bit leaner, with a better understanding and appreciation for both the diet he embarked on to gain weight and distance and the need for precision around a golf course that demands it.

But that does not mean he will tiptoe among the dogwoods and azaleas at the Masters this week, carefully navigating his way around Augusta National.

Bryson DeChambeau again plans to try to blister the place.

“I had to look back on what went wrong, what happened, what didn’t allow me to perform at the highest level I did at the U.S. Open,” DeChambeau said this spring as he was also trying to fine-tune his body. “My driving wasn’t the longest at the U.S. Open, but I putted amazing, I wedged it amazing. My iron play was incredible and I drove it pretty well.”

That, though, didn’t happen after he drove down Magnolia Lane.

“I look at Augusta … there were plenty of opportunities that I missed with wedging, putting and iron play,” he said. “I wouldn’t say it was necessarily the driver that got me into trouble for the most part, but definitely there were times where my putter and my wedges and my iron play did.”

Even if it didn’t work out the first time he brought his scientific methods to Augusta National, DeChambeau walked away still having gained some ground on the field.

He’s got others thinking about him and looking at their own games. While he gets better and follows his plan, others have tried to emulate it and lost their way.

Rory McIlroy presented the best example. While the four-time major champion was never going to become a voracious eater and attempt to gain some 40-odd pounds, as DeChambeau did, he certainly saw the benefits of trying to get more speed in his swing in an effort to hit the ball farther.

“I’d be lying if I said it wasn’t anything to do with what Bryson did at the U.S. Open,” McIlroy said after missing the cut at the Players Championship. “I think a lot of people saw that and were like, whoa, if this is the way they’re going to set golf courses up in the future, [distance] helps. It really helps.”

Since the middle of February, McIlroy has two missed cuts and was bounced early from the WGC-Dell Technologies Match Play after his worst loss in a decade. He does have two top-10s, but even those came with warning signs — he shot 72-76 over the weekend at the Arnold Palmer Invitational and closed with 71 at the WGC-Workday Championship at The Concession. Both times he had a chance to win. Both times he faltered on the weekend.

“I thought being able to get some more speed is a good thing, and I maybe just — to the detriment a little bit of my swing,” McIlroy said. “I got there, but I just need to maybe rein it back in a little bit.”

McIlroy is not alone.

“You would be stupid if you said what [DeChambeau is] doing to golf courses doesn’t make it easier,” Justin Thomas said. “I think it’s extremely underrated and not talked about enough how straight he hits it for swinging at 135 mph. I can hit it pretty damn crooked at 116 or 117 mph. He hits it really straight at 135. And he putts it really well.

DeChambeau has put a lot of thought and effort into this over the past two-plus years. He didn’t just start drinking protein shakes and lifting heavy weights one day. Under the guidance of trainer Greg Roskopf, who also works with the NFL’s Denver Broncos, he started to put in place a plan more than two years before he embarked on it in the fall of 2019.

The results were swift. An initial 25-pound weight gain. Added length off the tee that now sees him lead the PGA Tour in driving distance at 320.8 yards. (For the record, McIlroy is third at 319.1).

DeChambeau admits he might have gone too far with all the meat, potatoes, eggs and other food he was consuming. His daily allowance had reached 6,000 calories. The realization that it was time to fine-tune his diet came at the Masters.

In November, DeChambeau said during the tournament and again weeks afterward that he just did not feel right. He was having some balance issues. He even wondered if he had contracted the coronavirus; he took a COVID-19 test prior to the third round. It came back negative.

“I actually went to multiple doctors, multiple people, trying to figure out what this was,” he said. “I got a couple MRIs. Went to an inner-ear doctor, eye tests, eye pressure, ear pressure, even did ultrasound on my heart, ultrasounds on my neck to see the blood flow and how things were moving through the different areas of my body. Everything came back really, really well.”

DeChambeau also explained that he saw some pretty significant changes in his stomach, specifically inflammation. He started working on what he called “gut health” to alleviate the issues.

That meant altering his food intake a bit. So he returns to Augusta National a bit leaner but still carrying the same distance and same plan to attack. The preparation, this time though, is different.

Before the event in November, he took a month off from the PGA Tour and focused only on the Masters. He contemplated using a 48-inch driver to try to gain even more distance to try to shorten Augusta National even more.

While he’s still focused on distance, this time he will have worked extensively on other parts of his game. He will come in with positive results, too. He won the Arnold Palmer Invitational and was in contention down the stretch at the Players Championship.

Distance is an advantage at Augusta National. DeChambeau knows that. It is not, however, imperative to being atop the leaderboard come early Sunday evening. Recent winners such as Patrick Reed (287.4 yards off the tee, 182nd on tour) or Danny Willett (292.9, 129th) prove you don’t need extra length to take home a green jacket. But it is a big help to be able to drive the bunker at the first hole, or drive the green at the par-4 third, or have short irons into the par-5 13th and 15th holes. At Augusta National, all parts need to be working.

Consider this: DeChambeau played with 63-year-old Bernhard Langer in the final round in November. Langer won both of his Masters before DeChambeau, 27, was born. When they were paired together, Langer was 80 yards behind DeChambeau off the tee. Langer shot 71; DeChambeau shot 73.

“I was in awe just watching how they swing and how hard they hit it, and every once in a while I had to tell myself, go on, stop watching and play your game and figure out what you have to do,” said Langer, who also played with McIlroy during the third round.

DeChambeau seemingly spends every waking moment doing the same thing. That certainly is how it appears when he is at a golf tournament, often under floodlights on the driving range, searching for the right combination of shafts, lofts, swing speed and whatever else is necessary to launch the ball into orbit.

And now comes another shot at the Masters with his go-for-it plan still in place.

“I’m just trying to accomplish winning tournaments,” he said. “I don’t really care too much about what people think. It’s just about if I can do it. Look, if I fail, I’m going to work my hardest to figure out why I failed. So whether the skeptics are proved wrong, I’m not worried about it. I appreciate the skeptics, those that actually makes me think more about — is this actually right? — and makes me go down the rabbit hole even deeper.”