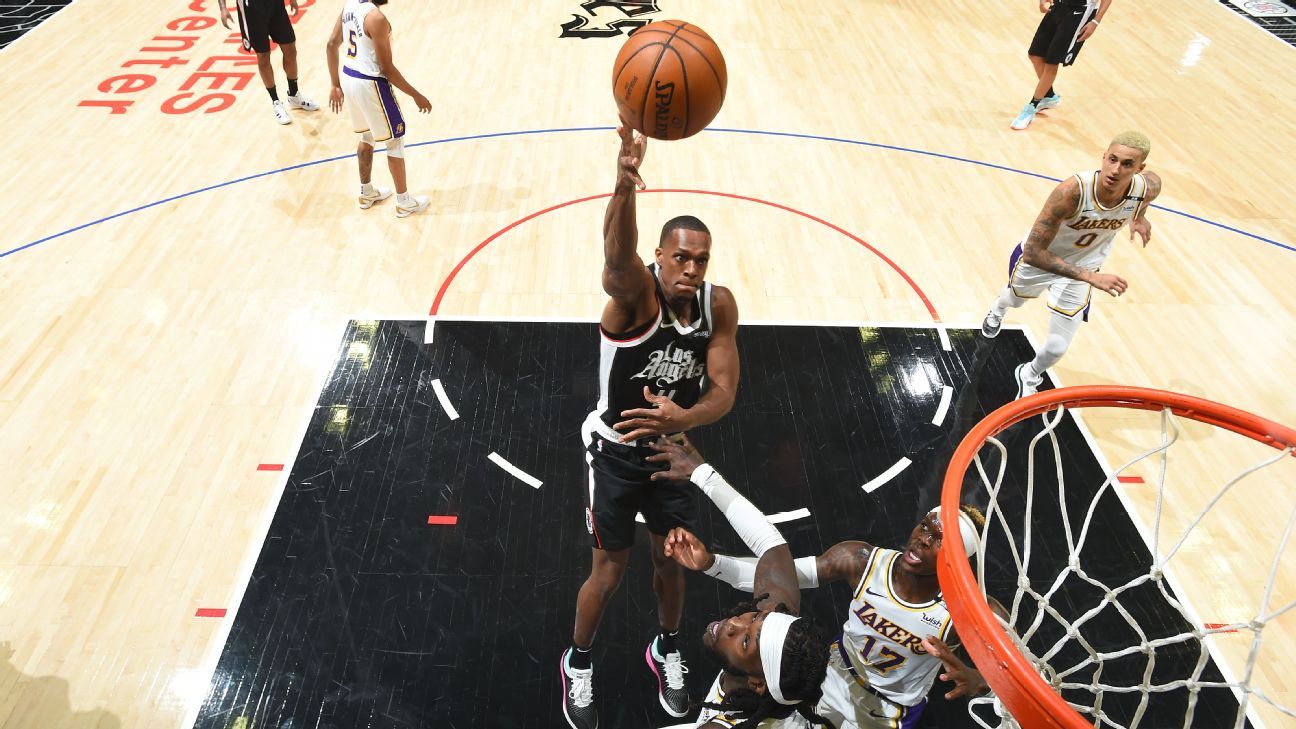 LOS ANGELES — It didn’t take Paul George long to see what Rajon Rondo can do for the LA Clippers.

Rondo made his Clippers debut Sunday, playing 13 minutes off the bench in a 104-86 win over the undermanned Los Angeles Lakers at Staples Center.

While Rondo had just two points, three rebounds and four turnovers as he plays on a minutes restriction after returning from an adductor injury, George can see all the intangibles Rondo brings.

George said Rondo’s impact as a playmaker can help him and Kawhi Leonard the way Russell Westbrook helped George when the two were in Oklahoma City.

“I think we can reserve more energy,” George said of how he and Leonard can benefit from Rondo. “I relate it to the relationship I have with Russ. Russ created a lot of closeout situations for me. And so it’ll be the same thing with Rondo. Rondo can get to the middle of the paint, he can make plays. And a lot of times he’s going to create closeout situations for us.”

George said Rondo, who won a championship with the Boston Celtics in 2008 and the Lakers last season, instantly becomes one of the respected leaders in the Clippers’ locker room.

“Rondo’s a leader, you know the point guard, he’s a leader,” George said. “We’re going to listen to him. I look at him as a leader, a leader of this group. He’ll hold a lot of weight. He holds a lot of weight in the locker room. As he gets more comfortable within our system, getting games under his feet, he’ll hold us accountable. That’s what you need in the locker room, somebody that’s going to say what needs to be said and get us going.”

The Clippers traded Lou Williams for Rondo in hopes that he will improve the leadership, basketball IQ and chemistry and orchestrate the offense — all areas that the Clippers were lacking in last postseason.

Rondo came off the bench Sunday and had a turnover in his first play, but he got a steal three seconds later and dished his first assist by finding Nic Batum for a 3 late in the first quarter.

Clippers coach Ty Lue said Rondo looked rusty as expected as he played in his first game since March 22, when the Atlanta Hawks played the Clippers.

Rondo said he has split his time on the court trying to learn the Clippers playbook and in the training room recovering from his adductor injury. Lue said Rondo has worked the locker room in trying to find out where teammates want the ball, including talking to Leonard and George on how to make things easier for them.

He was asked if he had identified what areas the Clippers need to improve to win a championship.

“I can’t dissect it that quickly,” Rondo said. “Obviously I want to be around and continue to learn my teammates, learn what the coach asks of us as players. I can’t really say exactly, pinpoint one thing that needs to be done here. I want to come here, help this team out as much as possible, lead in every way that’s possible, and obviously we have one common goal.”

Lue said he could see Rondo already improving the Clippers’ pace and believes he will help get them into offensive sets quicker and get Leonard and George into easier spots to score.

“He played with my brother [Markieff Morris] last year, and my brother had nothing but good things to say about him as a teammate. So we’re just excited to get him, and I think he’s really going to be a big factor in us trying to hang that banner.”