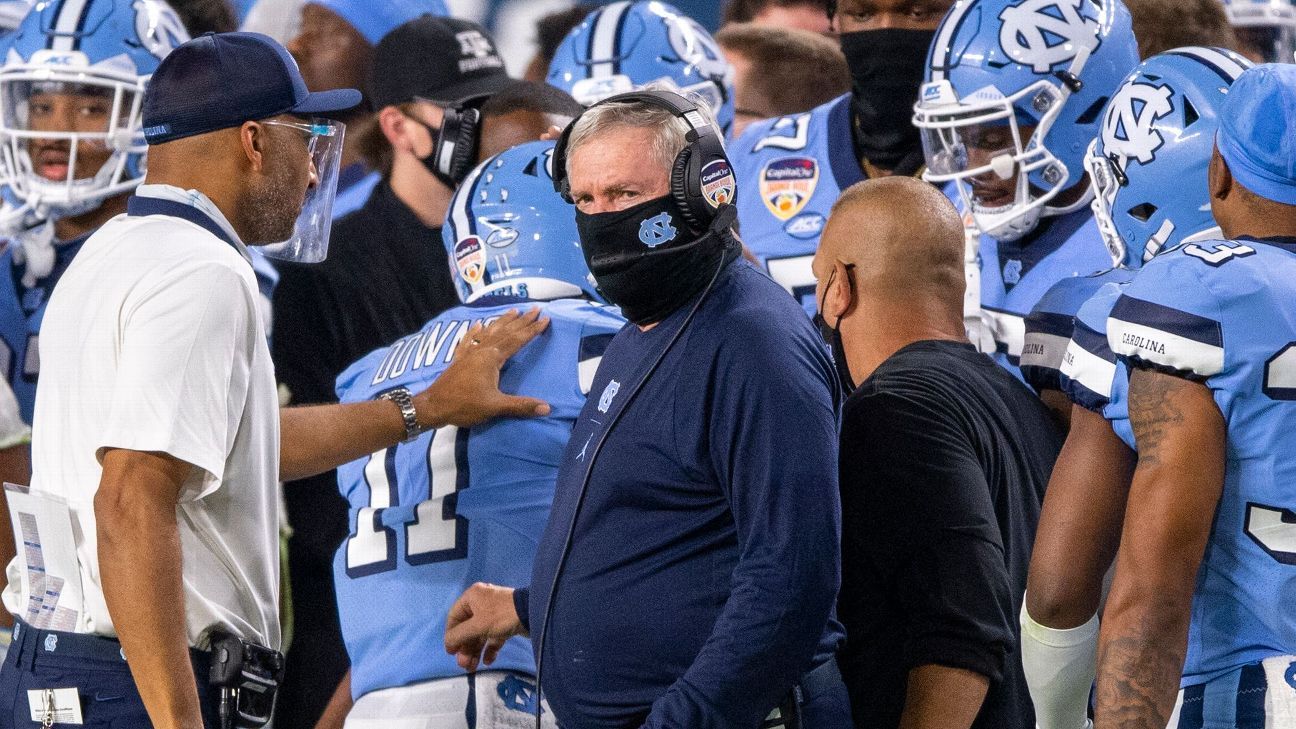 North Carolina linebacker Jeremiah Gemmel, who was on the team when UNC won five total games over the span of two dreadful seasons, said he can still remember the lackluster energy around the football facility in 2017 and 2018. Whether he was walking into the weight room or the training table, he said, it was palpable.

That began to change, Gemmel said, during the first team meeting with coach Mack Brown. He described Brown’s demeanor that day as “so genuine,” that he “immediately grabbed trust out of the team.”

“When Coach Mack came in and brought his staff in,” Gemmel said, “he brought the positivity and enthusiasm that completely changed the whole program around.”

For the second time in his career.

Brown compiled a 69-46-1 record at North Carolina from 1988 to 1997. From 1992 to 1997, Brown helped lead the Tar Heels to six consecutive bowl games, earning the respect of much of the fan base for raising football’s profile at what’s perceived to be a basketball school.

Last fall, in the midst of a pandemic, the Tar Heels won eight games for the first time since 2016, including a dominating 62-26 road win against a Miami team that was ranked No. 10 in the country at the time. It’s already paying dividends in recruiting. In two full recruiting cycles (2020 and 2021), Brown has lured in two straight top-20 recruiting classes — something Fedora never did once, according to ESPN Stats & Information.

“We’re so far ahead of where I thought we would be, since we had only won two Power 5 games in the previous two years before we came,” Brown, 69, said. “And we won five games overall and the kids were down, they were struggling. They didn’t know how to win. I didn’t know what we had. I knew it was a mess. But the first year either goes better than people expect or awful.”

North Carolina has yet to be anointed as a true national contender, but with 10 starters returning on defense, along with every starter on the offensive line and Heisman hopeful quarterback Sam Howell, it might not be that far-fetched.

There was evidence last fall that the Tar Heels are talented enough to upend ranked opponents, but they have to find elite playmakers this spring to replace running back Michael Carter, leading receiver Dyami Brown and receiver Dazz Newsome, and they have to learn to finish in the fourth quarter against top-10 opponents this fall.

Brown said he has high expectations for graduate transfer running back Ty Chandler, who transferred from Tennessee, where he racked up 3,291 all-purpose yards in 46 games. He also called linebacker Eugene Asante, who had a career-high 10 tackles in the Orange Bowl, the “heir apparent” to top tackler Chazz Surratt. The bowl game was Asante’s second career start.

While a four-team playoff field naturally eliminates at least one Power 5 conference champion, the formula for impressing the selection committee isn’t complicated — it just isn’t easy. Any team that wins its conference and finishes undefeated or with one loss against a schedule that includes a win against a ranked Power 5 nonconference opponent is top-four material. Teams don’t have to be named Alabama, Clemson, Ohio State or Oklahoma to compete in the College Football Playoff — but they have to play at their level.

“If there should be a team to break that stereotype,” Gemmel said, “it should be North Carolina.”

Howell said he has never seen his teammates work so hard, and there’s a renewed energy and “buzz around the program.”

“If we take down a team like Clemson,” he said, “I think we’ll have everyone’s attention.”

A win against the reigning ACC champion — along with fulfilling the other aforementioned requirements — would almost guarantee UNC a spot in the playoff. Just positioning itself for that opportunity might be enough. It worked for Notre Dame, which still finished No. 4 in the country last year in spite of being thoroughly outplayed by Clemson in the ACC title game.

One of the underrated reasons the Irish got in? The committee respected that Friday road win against a ranked North Carolina team. The Tar Heels have a chance to beef up their résumé and get some revenge this year with an Oct. 30 trip to Notre Dame — and they have to make the most of that opportunity because wins against nonconference opponents Georgia State and Wofford won’t help their playoff case. Last year, UNC lost to Notre Dame 31-17, but the game was tied at 17 at the half.

North Carolina also had a 20-17 lead heading into the fourth quarter against No. 5 Texas A&M in the Capital One Orange Bowl before losing 41-27. But the Tar Heels were without Dyami Brown, Surratt and leading rushers Carter and Javonte Williams — all of whom opted out of the bowl game.

For UNC to ascend from good to great, it has to be able to win those games and avoid losses to the likes of Florida State and Virginia.

“I think we can get in if we impress the committee enough with who we are,” Brown said. “We need to dominate the teams we should, and we need to beat the others, and then if we lose to Clemson in the conference championship game, it needs to be a fight.”

Becoming a mainstay in the ACC title game — just as Clemson has done through the Atlantic Division — is not an impossible task, considering North Carolina competes in a mediocre division. From 2013 to 2019, seven different teams have won the Coastal Division — and none of them won the ACC. Only Clemson and Florida State won the title during that span.

“We will be as good as anybody in the Coastal and should have a chance to win it every year,” Brown said, “and it hasn’t been that way.”

North Carolina’s improvement as a team has paralleled a measurable turnaround in its offensive efficiency. According to ESPN Stats & Information, UNC ranked No. 52 in the nation in 2018 with 5.6 yards per play. Last year, the Tar Heels were No. 3 in the FBS at 7.6.

“I thought we became legitimate in three of our last four games because you played No. 2, you played No. 5, and you played No. 10, and you win one of them — you dominate one of them — and then you’re in the fourth quarter with a chance to win with the others,” Brown said. “That’s what we’re selling our guys on. These are top-10 games, but if you want to be a top-10 team — if you want to be a playoff team — you can’t play Notre Dame well. You can’t play A&M well. You’ve got to win. I think they get that.”

If they don’t, a history lesson might not hurt.

In Brown’s final year during his first stint at UNC, the Tar Heels climbed to as high as No. 4 in the AP Top 25 poll — a coveted CFP spot that could change the entire perception of football at UNC.