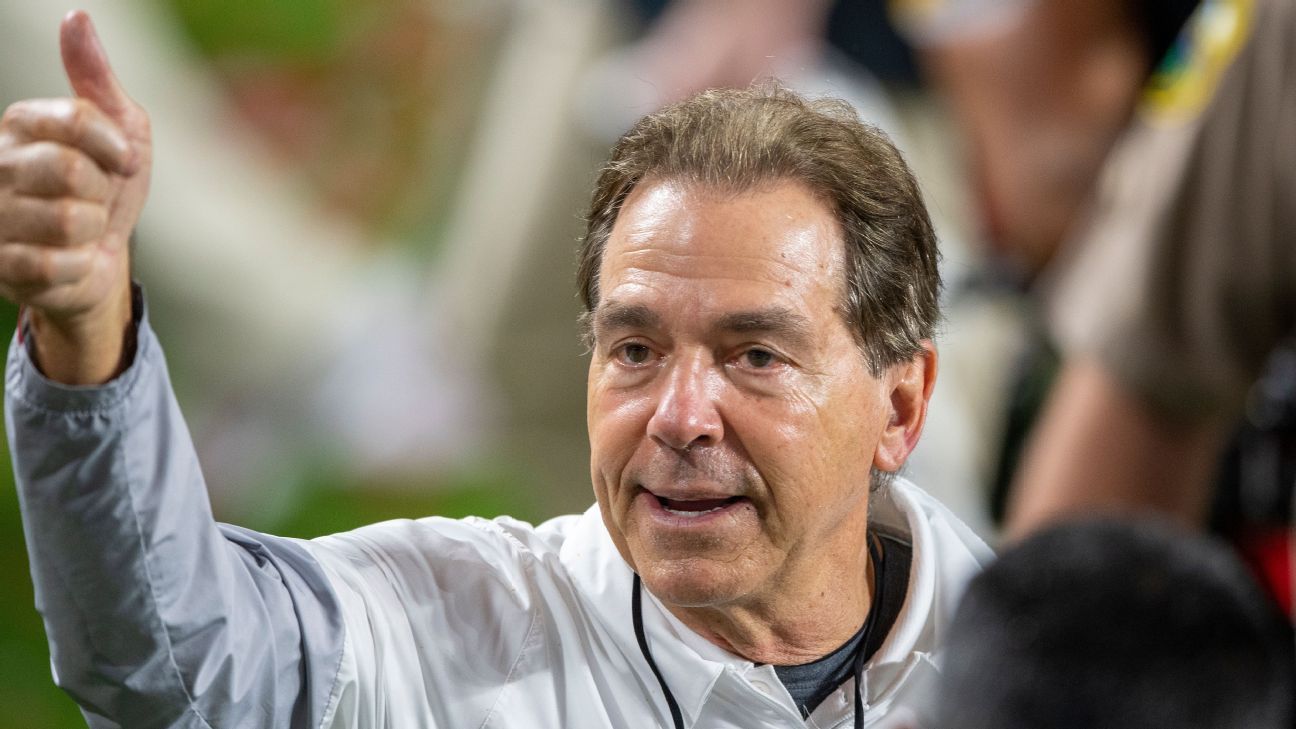 College football recruiting can be a roller-coaster ride and a back-and-forth battle for coaches trying to fill their classes.

The 2021 cycle was no exception, and there was plenty of movement in the class rankings from the first release last spring to the final signing period in February. It’s not about how teams start, but how they finish, and some programs showed that they knew how to finish.

Here is a look at teams that rose and fell in the rankings throughout the cycle and what the 2022 class looks like up to this point.

Teams that moved up

Alabama Crimson Tide
Started: Outside the top 25
Finished: No. 1

Alabama started slowly in the 2021 class, not even being ranked in the top 25 in the initial class rankings last May. The Crimson Tide were then ranked No. 23 with five total commitments on May 22 and moved up to No. 18 on June 23 with eight total commitments.

That’s when momentum started to move in Alabama’s favor. The staff moved from No. 13 in the rankings on July 6 to No. 2 on July 23 with 15 total commitments. They reached No. 1 on Aug. 19 and never looked back.

From May 8 to Aug. 17, Alabama landed 15 ESPN 300 commitments, including three five-star recruits in offensive linemen Tommy Brockermeyer and J.C. Latham and linebacker Dallas Turner. There wasn’t another team in the country that added as many top recruits in that time span than Alabama, and the Tide finished with 22 ESPN 300 commits, five more than Ohio State and Clemson, who are tied for second with 17.

2022 outlook: Relative to Alabama’s standards and how some other programs are recruiting in this 2022 class, Alabama is off to another slow start. The staff has three ESPN Jr. 300 commitments in the class, which trails Ohio State (nine), Georgia and LSU (eight), Penn State and Notre Dame (seven) and four other programs.

But if the 2021 cycle proved anything, it’s that there’s no reason for Alabama to panic or think there’s something wrong. Running back Emmanuel Henderson is ranked No. 12 overall and quarterback Ty Simpson is ranked No. 27. Linebacker Robert Woodyard is also a top-100 prospect, and the Crimson Tide’s two non-ESPN Jr. 300 commits are ranked as four-stars.

Plus, the list of elite uncommitted recruits still listing Alabama is long and includes offensive lineman Riley Quick, cornerback Denver Harris and Walter Nolen, the No. 2-ranked recruit overall, among many others.

Georgia Bulldogs
Started: No. 10
Finished: No. 3

Georgia wasn’t talked about all that much compared to how well the staff finished in recruiting. It likely has to do with how well Alabama and Ohio State recruited, but any other year and Georgia would’ve been in the running for the top class overall.

The staff started out at No. 10 before falling to No. 17 because other teams surged ahead. The Dawgs climbed to No. 13 on July 23 and made a big push toward the end of the cycle before the early signing period to make it into the top three.

Georgia finished with 15 ESPN 300 commitments. Considering the staff only had 11 total commitments on July 23, it’s clear how much work the staff did from August to December. They were able to get 10 commitments from prospects ranked in the top 10 of their respective positions, including ESPN 300 quarterback Brock Vandagriff, the No. 6 pocket-passer in the country, and five-star athlete Smael Mondon.

2022 outlook: The staff was a little up and down at first in the 2021 class, but that is not the case in 2022. Georgia has been on fire as of late, adding six commitments in the class since January.

The staff now has eight ESPN Jr. 300 commitments in the class, led by defensive end Tyre West, the No. 8-ranked recruit overall, athlete Deyon Bouie (No. 15) and athlete Malaki Starks, who is the No. 31 prospect in the class. Georgia added in another top quarterback in this class with ESPN Jr. 300 dual-threat signal caller Gunner Stockton.

That’s two important quarterback prospects in two classes for the Dawgs’ future offense at a position that has lacked stability the past few seasons.

Recruiting under Mario Cristobal has improved year after year at Oregon, and this class helped move the program up another step. The Ducks started out at No. 17 and were able to climb all the way up to No. 5 overall.

On May 1, Oregon only had five commitments, which was the fewest at the time of any program ranked in the top 25.

The staff has built a good foundation of young defensive players, and this 2021 class is adding some talented youth on offense, as 11 of the 16 ESPN 300 signees are on the offensive side. The coaches added three ESPN 300 wide receivers, four ESPN 300 offensive linemen, two ESPN 300 running backs and quarterback Ty Thompson.

The coaches didn’t ignore the defense, though, as cornerback Avante Dickerson is the Ducks’ highest-ranked commit and one of three ESPN 300 defensive backs in the class.

2022 outlook: The coaches have taken the momentum from the 2021 class and brought it over to 2022. Oregon already has six ESPN Jr. 300 commitments in the class, led by Alabama quarterback Tanner Bailey and California defensive end Gracen Halton.

As of now, there are only five teams with more ESPN Jr. 300 commitments than Oregon. Considering how the staff closed in 2021, there’s a good chance the Ducks could see themselves in the top five once again in February.

Teams that moved down

Tennessee Volunteers
Started: No. 5
Finished: No. 19

This class started lights-out for the Vols, ranked No. 5 overall with 15 total commitments on May 1. The team climbed to No. 2 overall in just 11 days by adding six more commitments, and it stayed in that spot until July 6, when the Vols fell to No. 3 in the rankings.

The class tumbled and the staff was eventually fired, which only led to more problems. Tennessee finished at No. 19 overall in the rankings with five ESPN 300 commitments. Factor in the fewer number of ESPN 300 commits and the challenges from COVID-19 restrictions, and Tennessee could face an uphill battle to get to where it wants to be.

2022 outlook: The new coaches don’t have any commitments in this class yet, and it’s tough to blame them entirely for that. They inherited an abrupt firing that created an unfixable situation, and they did it in the middle of an NCAA-created dead period.

New head coach Josh Heupel is coming from UCF, which is a completely different recruiting base and target point. Having that transition can be difficult anyway, but it could be even more of a challenge given coaches need to build relationships while, for the time being, they can’t have recruits or their families on campus, or have coaches travel to high schools.

It’s easy to forget Minnesota started out at No. 6 in the rankings back in May. The Gophers were rolling and had a lot of people paying attention to what they were doing.

The staff hung in the top 10 until the end of June, when they started slipping as more teams added elite prospects to their classes, and Minnesota fell out of the top 25 by August. That’s not all bad for the Gophers, as teams kept passing them in the rankings because ESPN 300 prospects they weren’t targeting were announcing commitments to other teams.

At the same time, there were six prospects that left the class, including ESPN 300 cornerback Avante Dickerson, who was the highest-ranked commitment Minnesota had ever had, and ESPN 300 wide receiver Sam Jackson.

If they weren’t going to land more ESPN 300 recruits, the coaches needed to hang on to the ones they had. Losing Dickerson was a big loss to that class and to the future defense for what he could’ve been at Minnesota.

Having the No. 31-ranked class isn’t bad for Minnesota, but P.J. Fleck has put this program in a position where it’s included in a story like this because there is an expectation to see the team improve each season. That’s not a bad thing for Minnesota.

2022 outlook: The coaches are already off to a good start in 2022 with ESPN Jr. 300 defensive end Trey Bixby out of Lakewood, Ohio, committed. He’s the No. 208-ranked recruit overall and the only commitment for Minnesota ranked in the top-300.

With five total commitments, the coaches have already been able to add some of their top targets, and even though it won’t be flashy with multiple ESPN 300 recruits, recruiting is still headed in the right direction under Fleck.

Putting North Carolina here is a little deceiving. The Tar Heels dropped in the rankings, but part of that was because five-star cornerback Tony Grimes reclassified from the 2021 class and enrolled at North Carolina in August. Grimes ended up playing this season and because he reclassified, he no longer counted toward this class and its rankings.

No one is docking the Tar Heels for that; the fact the coaches were able to sign a five-star cornerback who was ready to contribute significant minutes on the field when he should have been studying for his high school tests says a lot about what Mack Brown and his assistants can do in recruiting.

Grimes wasn’t the only five-star in the class, either, as defensive end Keeshawn Silver also signed with North Carolina and was the second five-star defensive end to sign in as many classes. The coaches also flipped ESPN 300 quarterback Drake Maye from Alabama and they put together an excellent class from top to bottom.

Had Grimes not reclassified, North Carolina would have been one of only three teams to sign at least two five-stars in this class. So this was a bit misleading because of a unique situation.

2022 outlook: Brown and his staff are already recruiting well in 2022, as well. They have four total commitments and three ranked in the top-300.

The class is led by wide receiver Tychaun Chapman, the No. 53 ranked recruit overall, cornerback Tayon Holloway and linebacker Malaki Hamrick. There are plenty of big targets still on the board, too, including offensive lineman Zach Rice included the Tar Heels in his top five along with Alabama, Notre Dame, Ohio State and Virginia.

The way Brown and his coaches recruit will always translate, and there’s no reason to think North Carolina couldn’t get themselves into the top 10 in this cycle.