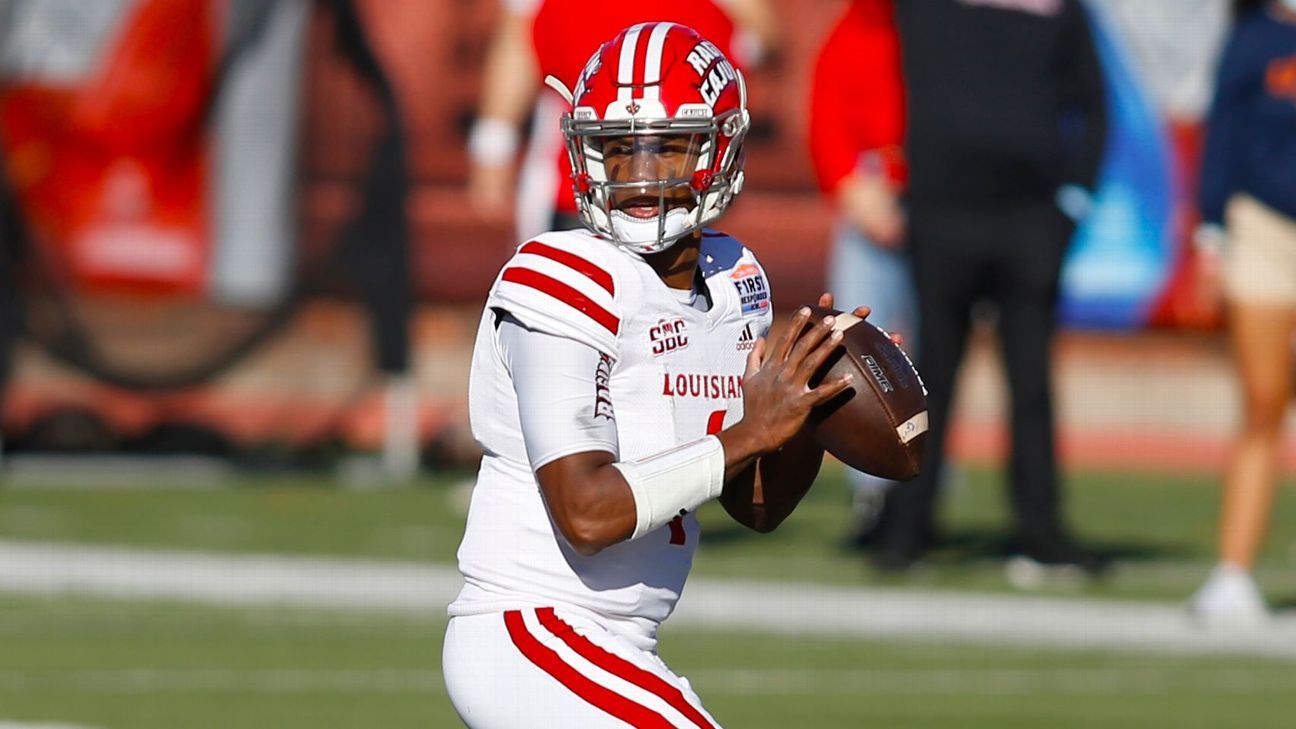 Before 2018, no Sun Belt team had ever finished in the SP+ top 35, but we’ve seen six do so in just the past three seasons. Appalachian State leads the way, having done so for three straight years, but Billy Napier’s Louisiana has done so twice in a row and now leads the country in returning production.

We’re going to learn a lot about what experience can do for a team and its upside this year. The Ragin’ Cajuns have a chance to become the best SBC team of all time this fall if all this continuity produces another gear.

We’re also going to learn if anyone in the West division can even come close to threatening the three-time defending division champs. Signs point to no.

Every week through the summer, Bill Connelly will preview another division from the Group of 5 and Power 5 exclusively for ESPN+, ultimately including all 130 FBS teams. The previews will include 2020 breakdowns, 2021 previews and a brief history of each team in one handy chart. The series has thus far covered the Conference USA East and West, the MAC East and West, and the MWC Mountain and West.

* Likely wins are games in which SP+ projects the scoring margin to be greater than seven points, or above about 65% win probability. Likely losses are the opposite, and relative toss-ups are all the games in between.

SP+ isn’t built to take Jackson State’s bounty of FBS transfers into account. If it were, that game would not be at 83%.

Hard jobs remain hard. I use this analogy a lot, but ULM is the ultimate “slowly push the boulder up the hill, slip slightly and watch the boulder run over you on its way back to the bottom” job. Powered by strong offenses, Viator went 6-6 in 2018 and 5-7 in 2019. But a young offense fell apart in 2020, and the defense couldn’t pick up slack. ULM not only went 0-10 but lost nine games by at least 18 points.

It’s Bowden’s turn now. Bowden inherited a rock-bottom Akron program in 2012 and won at least five games from 2013-17. (The Zips then fell apart, and his successor went 0-12 in 2019, but we’ll ignore that in the name of optimism.) He brought another cagey old veteran, offensive coordinator Rich Rodriguez, with him.

(He went the other direction with his defensive coordinator hire: 27-year-old Zac Alley.)

The cupboard isn’t totally bare in Monroe, and Bowden hit the transfer portal pretty hard for early-impact guys. But even by Sun Belt standards, depth and standout talent talent appear to be at a minimum.

UL Monroe’s history in one chart

South Alabama began the season an intriguing 3-2, but the Jags lost five of their last six and third-year coach Steve Campbell was out of a job.

The Jags have some speed on the edge. Jalen Tolbert, one of the best wide receivers in the Group of 5, averaged 17 yards per catch. Young receiver Caullin Lacy has return-man speed and generated big plays in a few touches. Edge rushers Chris Henderson and Shawn Jennings produced high pressure rates. Corner Davyn Flenord was fast and aggressive. Safety Keith Gallmon was everywhere. USA was mostly outmatched in the trenches, and that might not change, but they can run.

There’s potential at QB. Desmond Trotter is inconsistent but has produced a passer rating over 160 in seven of 14 games; backup Tanner McGee hopped off the bench to torch Arkansas State in a comeback win; and to assure a high floor, Wommack brought in South Carolina and Utah transfer Jake Bentley.

How much a scheme change will help. New offensive coordinator (and former Houston head coach) Major Applewhite spent the past two seasons as an analyst in Nick Saban’s Coach Rehabilitation Machine and will presumably try to turn Tolbert into Devonta Smith II and make heavy use of motion, play-action and RPOs. New defensive coordinator Corey Batoon will re-install a 4-2-5 that USA had success with under Wommack (DC in 2016-17) in the past.

A speed-friendly system can’t hurt with this personnel, some of whom were recruited to play for Wommack years ago. But will solid scheme result in solid improvement? Is there enough raw talent on the roster for a major jump?

South Alabama’s history in one chart

Sure, Jake Spavital’s second Texas State team only went 2-10 last year, but it was a fun 2-10: five one-score games and six games with at least 65 combined points.

Six games are projected within one score. Three of the Bobcats’ five toss-ups, plus the game against UIW, come up in the first five games. A fast start is possible if they win more of their close games this time.

What we learned about Texas State in 2020

Brady McBride is fun and unpredictable. After alternating snaps with Tyler Vitt — due to both COVID-19 protocols and both guys deserving snaps — McBride, a Memphis transfer, caught fire late. In his last three games, he completed 70% of his passes with a 181.7 passer rating. He has a bit of a Johnny Manziel-like wild streak, but he looked awesome. Big-play target Marcell Barbee returns, as does every running back and four starting linemen. This has the makings of the Bobcats’ best offense since at least 2014.

Spavital thinks outside the box. Spavital signed zero freshmen in his 2021 class, instead inking one juco transfer and hitting the transfer portal to fill all remaining slots. He landed well-touted NC State freshman QB Ty Evans, three OLs, three DBs and quite a few others. If Spavital’s gambit pays off, the idea of rebuilding through the portal, and not through five-year recruits, could build even more momentum.

What we didn’t learn about Texas State in 2020

When Zac Spavital’s defense might deliver. In the two years with the younger Spavital serving as coordinator, the Bobcats have sunk from 73rd to 120th in defensive SP+. Key players like tackle Caeveon Patton and linebacker Markeveon Coleman either missed the season or played through injury, so Spavital never fielded his preferred unit. Still, it was dire.

Corner Jarron Morris and tackle Nico Ezidore are keepers, and the truckload of transfers can’t hurt. But the Bobcats are playing catch-up on that side of the ball.

Texas State’s history in one chart

With ASU’s lineup in constant flux in 2020, the Red Wolves plummeted to 100th in SP+. Is Jones attempting a rebuild, or a simple resumption of their previous trajectory?

The offensive potential remains high. Last year’s stumble was due primarily to the defense; the Red Wolves ranked 50th in offensive SP+, their sixth top-60 finish in the past seven years. They pulled it off last year with a QB platoon — Logan Bonner took 288 snaps, Layne Hatcher 231. Bonner followed Anderson to USU, but Hatcher, the better of the two on average, returns.

If there were any worse pass defenses in college football. ASU’s run defense was genuinely stout, but it didn’t matter — opponents could pass on them all day. The Red Wolves allowed nearly 14 yards per completion and finished 122nd in passer rating allowed.

New defensive coordinator Rob Harley, previously of Pat Narduzzi’s Pitt staff, inherits an experienced defense — nine returning starters, plus three veteran linemen added via the portal — and in corner Samy Johnson, he has at least one genuine playmaker. But defending the pass is maybe the most important thing in college football, and ASU was horrible at it despite Johnson.

Arkansas State’s history in one chart

Louisiana began 2020 by beating maybe the best Iowa State ever and finished it 10-1. Now the Cajuns return 21 starters and heavily sought-after head coach Billy Napier. That seems like a good combination.

We don’t know what Texas will look like in Steve Sarkisian’s first game in charge in Austin. We do know that the Longhorns will have to look pretty good to start the season 1-0 against UL.

What we learned about Louisiana in 2020

The upside is even higher than we thought. After winning 11 games in 2019, UL had to replace a large chunk of its receiving corps, offensive line and secondary. It was fair to wonder if a drop-off was coming. It wasn’t. UL fielded one of the nation’s best run games and a secondary capable of physically dominating just about every receiver on the schedule.

The passing game did slip a bit, but UL avoided negative plays, created and prevented chunk plays, tilted the field and eventually ran teams over.

The defense had another gear. Defensive coordinator Ron Roberts improved the Cajuns from 129th to 66th in defensive SP+ in just two years, but when he left for Baylor, 30-year-old Patrick Toney took things even further; UL played the 12th-most man coverage in FBS, rushed the passer from every angle and jumped to 40th in defensive SP+. Corners Eric Garror and Mekhi Garner combined for six interceptions and 13 pass breakups, and linebackers Ferrod Gardner and Lorenzo McCaskill were excellent blitzers and sure tacklers. They’re all back.

What we didn’t learn about Louisiana in 2020

How much further this can go. Two excellent running backs, Elijah Mitchell and Trey Ragas, depart, and while backups Chris Smith and Emani Bailey looked strong in a smaller sample, there’s a high bar to clear. But they’re also almost literally the only contributors to replace. Quarterback Levi Lewis is back, and not only does UL return all five starting linemen, but Napier added rival ULM’s best lineman, guard T.J. Fiailoa, via the transfer portal.

The most problematic units, the receiving corps and defensive line, will be far more experienced, especially with the return of big-play receiver Jamal Bell, who was injured for most of 2020.

Returning almost all of last year’s production and adding more all but guarantees the Cajuns to improve, and UL is projected to jump from 31st to 22nd. But will they hit their potential ceiling at some point? Can the passing game improve, especially if the run game is slightly less efficient? And most importantly:

Can the Cajuns beat Texas in Week 1? They won’t be favored, but they are physically capable, and if they start 1-0, 12-0 is an extreme possibility.

This is going to be a fascinating fall in Acadiana.

Louisiana’s history in one chart