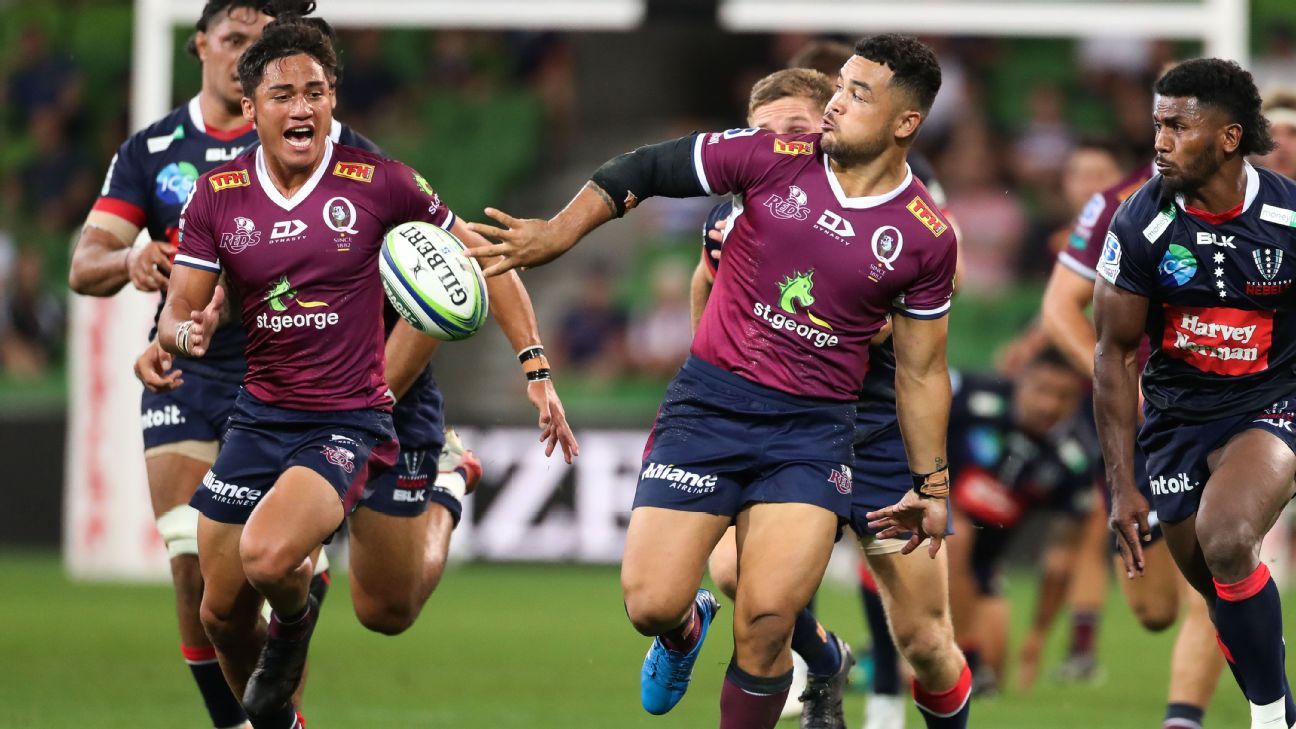 What a weekend of Super Rugby?! The Crusaders lost at home, the Waratahs fell agonisingly short of a first win for 2021 and the Reds continued their dominance. Elsewhere, there were wins for the Brumbies, Highlanders and Blues.

How much better can this Queensland Reds team get? It’s an ominous thought, so far they’ve gone unbeaten through six rounds and have edged their way closer to the perfect game with their win against the Rebels perhaps their most complete performance yet.

Playing to reclaim top spot on the Super Rugby AU table and to give themselves a strong chance of hosting the grand final, the Reds were dominant from the opening minutes, smothering the Rebels and piling on the pressure. After 18 minutes the result looked as good as done, after they raced to a 24-0 lead with a double to Taniela Tupou.

You know the performance was impressive when Reds coach Brad Thorn gave it a rare thumbs up postgame.

“You’re looking for perfection each week,” Thorn told Stan Sport post match. “Tonight I’m so much happier, particularly around the turnovers. Last week we had like 19, this week we had under 10.

“We’ve been talking about and training around being responsible with the ball, but I challenged them before the game to action it. We’ve talked about this the last three or four games so I asked them to action it, and tonight they did.”

The frantic pace played completely into the Reds’ hands with Queensland prepared to chance their hand with ball in play, while their kicking game was played to perfection. James O’Connor’s work at fly-half was eye-catching, as he consistently asked questions of the Rebels defence and his move to sweep to the left and set up Tupou’s second try exemplified his ability to split the defence and was just one of his many classy moves.

Halfback Tate McDermott continued his impressive form alongside Hunter Paisami — who shifted back into outside centre – ending the night with a try, three line breaks and a huge 125 metres run. Hamish Stewart certainly didn’t disappoint in his 50th match for the Reds, floating some nice passes and reenacted a brick wall in defence. In fact, apart from Jordan Petaia’s off night, the whole Reds backline was on song and looking dangerous.

Their forward pack was equally as threatening. Tupou’s double stole headlines but his work at scrum time was just as impressive while their set-piece was a cornerstone to their huge 25-point win. They won all of their scrums and heaped plenty of pressure on the Rebels’ feed, while their lineout created plenty of chances. Adding to their dominance is their huge back-row, who continue to create havoc at the breakdown; Fraser McReight’s performance was particularly dominant.

Perhaps what was most impressive was how efficient the Reds were with the ball. Looking at the match stats, possession and territory was split 50/50, while the Rebels ran more metres, threw more passes and made more runs. It meant little though, with the Reds making high percentage kicks, treasuring possession with only nine turnovers compared to the Rebels 17, while Queensland also made the most of turnover ball – two of their six tries coming off the back of intercepts.

If they could find anything to fault, it would be taking their foot off the gas late in the first half to give the Rebels a sniff. Their opening 20 minutes was most certainly their best passage of play this season, but just before halftime they seemed to take a step back and the Rebels managed to score a quick double through Frank Lomani and Reece Hodge within six minutes. But their ability to come straight out after the half-time break to put the pressure straight back on the Rebels with a try to McReight exemplified the class of this side and their mentality.

It sets up a tantalising clash next weekend at Suncorp Stadium against the Brumbies. Their last clash was considered the best Australian derby to date and with grand final hosting rights on the line this match will no doubt go up another level.

GORDON A SILVER LINING FOR WARATAHS

It was a long, trying week for the Waratahs starting with the sacking of their coach on Sunday evening, capped off with an agonising two-point loss to long time rivals the Brumbies. But if there’s one faint silver lining that could be found among the gloom it’s Jake Gordon’s long awaited return and his immediate impact for the struggling side.

A young group that has struggled without a clear leader this year, the Waratahs looked like a different team running out under Gordon. His communication and composure was evident early in the match with the Waratahs looking more assured under his presence.

It became clear quickly that Gordon had been the missing link for the Tahs this season. He made all the right decisions at the right times, and his focus and energy lifted those around him, especially young fly-half Will Harrison who has so far been well off his game this season.

While the Waratahs are still anchored to the bottom of the table, they’ll take plenty of confidence out their performance with two final chances to secure a win this season.

HIGHLANDERS OUT-CRUSADER THE CRUSADERS FOR ‘UPSET OF THE SEASON’

Who saw that coming? Who honestly thought that after sidelining six players through off-field misadventure, the Highlanders could head to Christchurch and come away with a win?

Well certainly not the bookmakers, who installed the visitors as $8 outsiders.

But from the opening whistle it was clear the Highlanders weren’t short on self-belief as they set about frustrating the Crusaders and played smart tactical rugby that played away from their hosts’ strengths and then forced them into careless errors.

With Folau Fakatava given a rare start at scrum-half — from which he impressed before Aaron Smith later help to ice the encounter — and Mitch Hunt having his best game since his move south three years ago, this was a win the Highlanders will cherish for some time.

In mixing up their exits and exit-kicking options the Crusaders weren’t able to easily answer opposition tries like they are accustomed to doing; they were given little chance to open up the Highlanders out wide as the Highlanders employed a smart rush defence and Scott Robertson’s side were unable to employ the offload game — which Wayne Smith pointed to as among their major strengths in an interview with ESPN last week — that has been a cornerstone of their success over the past four years.

And for the first time this season, fly-half Richie Mo’unga was ordinary, rather than extraordinary, with the fly-half unable to wreak the havoc that will have previously had him on track for yet another Super Rugby Player of the Season award.

If there was a play that summed up the defending champions’ night it was Will Jordan’s poor pass that went behind David Havili in the closing minutes and was quickly swooped upon by Conor Garden-Bachop for the Highlanders’ third try.

SUPER RUGBY AOTEAROA GETS THE UNPREDICTABILITY IT NEEDED

While it was a fine competition last year, the one criticism of Super Rugby Aotearoa was that it was fairly predictable. Sure, the Hurricanes eventually ended up beating the Crusaders at home, but there was otherwise few shocks along the way.

The Highlanders’ defeat of the Crusaders has certainly shaken the tournament up this year, though.

While Scott Robertson’s side remain competition favourites, their New Zealand rivals will no doubt take plenty from both the nature of the Highlanders’ game plan and the belief that the Crusaders are human, too.

The Blues have the strike weapons to worry the Crusaders but so far this season have lacked the discipline and execution to convince people that they really are a chance of defeating their southern rivals. It was important they bounced back against the Hurricanes, as they did on the weekend, and can refocus their attention on both the Highlanders and Crusaders after this week’s bye.

And Friday’s victory over the Crusaders will be a massive confidence booster for the Highlanders who are suddenly back in the race for the final. If they defeat the Chiefs this weekend, the Highlanders will draw level with the Blues on points ahead of their crunch clash the following week.