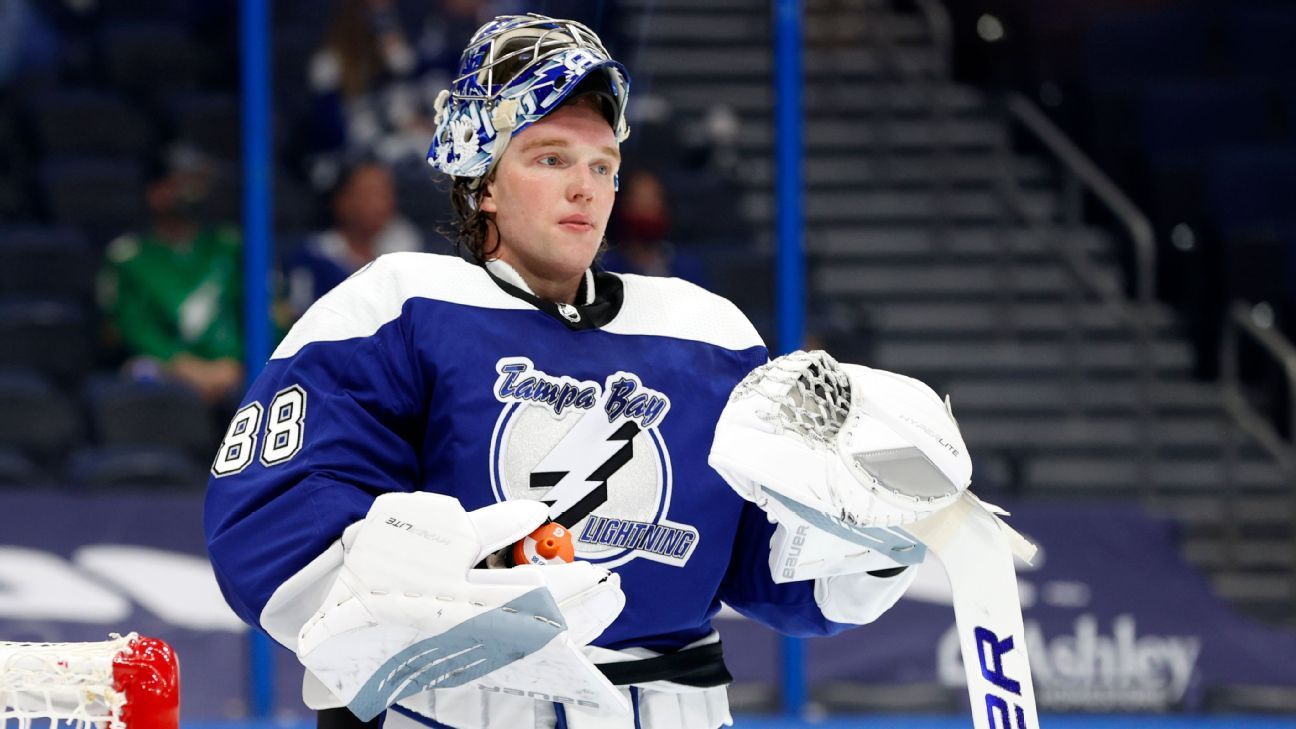 All we ask from our NHL positional-rankings voters is honesty and candor. After one veteran turned in his list of the top 10 goaltenders, his reaction fulfilled that obligation.

“I didn’t like the list at all,” he said. “When I started to piece this together, it was stunning. This was an interesting list because, man, it was hard coming up with 10 goalies.”

The coach said you didn’t have to go back farther than 10 years ago to understand his frustration. The Vezina Trophy voting in 2010-11 had Tim Thomas, Pekka Rinne, Roberto Luongo and Henrik Lundqvist in the top four spots. Carey Price and Marc-Andre Fleury were playing well. Jonathan Quick was on the cusp of his ascendence to elite-level goaltender. Martin Brodeur and Miikka Kiprusoff were nearing the ends of epic careers, but still playing well.

“It does speak to a potential goalie shortage,” he said.

Perhaps. But the best of the best in this year’s goalie rankings were clearly the best.

As a reminder on how these were produced, we canvassed 10 active NHL players — seven skaters, three goaltenders — and 10 individuals in team hockey operations, from coaches to general managers to player personnel executives. The surveys were conducted over the past two months. Respondents were asked to rank their top 10 players at center, winger, defenseman and goaltender, based on a predetermined list of the top 20-30 at each position. Players who were ranked in the top 10 on each ballot were given a numerical score — No. 1 earned 10 points, No. 2 earned nine points and so on.

After our lists of the top 10 wingers, top 10 defensemen and top 10 centers, here are the rankings for best goalies for the 2021 season, according to those we surveyed.

Stats are collected from sites such as Natural Stat Trick, Hockey Reference and Evolving Hockey.

“He just won a Cup,” said one NHL coach, “so he has to be the top-ranked goalie on this list.”

Vasilevskiy has provided ample justification for being ranked No. 1 — as he was on 16 ballots — beyond having backstopped the Lightning to the Stanley Cup last season. Vasilevskiy has a .932 save percentage this season, having been better than .917 in five straight seasons. He has 22 shutouts in that span. While wins shouldn’t be the measure of a netminder, it’s worth mentioning that Vasilevskiy is a stellar 141-46-11 in the past four seasons.

“It’s not even a debate worth having. Vasy’s gotta be No. 1,” said one veteran NHL skater.

Hellebuyck was praised for his work rate — and putting up incredible numbers despite playing as much as he does — by several of our respondents. He led the NHL in shots faced and shots saved in the past two seasons, and is doing so again through 30 appearances in 2021. He’s had a save percentage of over .920 in three of the past four seasons.

He won the Vezina last season after placing second for the award in 2017-18. He appeared on 16 rankings that placed him in the top five. Although four voters — three team executives and one veteran goalie — had him second overall, no voters had him first.

How does Carey Price end up here, despite his numbers? Why does Price always get voted as the top goalie on those NHLPA internal ballots? Why did he get two first-place rankings here, by a general manager and a veteran skater?

This might be one of the most skewed differences that we have this year across all positions. Over the past three seasons, Price is eighth in the NHL in goals saved above average per 60 (0.265) for goalies who logged at least 3,000 minutes. His save percentage has been below .910 in three of the past four seasons — including this season when he has a .902 save percentage in 22 appearances. And he clearly has been outplayed by backup Jake Allen.

None of this seemed to matter to most rankers. Price was in the top five on 14 ballots — although two player personnel officials and one veteran forward had Price completely off theirs.

“It’s Price. For sure he belongs this high,” said one NHL coach who had him second. “I’m probably a bigger fan than most, but he’s incredible.”

After years of carrying the Ducks, Gibson’s back has started breaking. He posted a .904 save percentage last season, and he followed that with a .898 save percentage through 25 games this season. But in the classic debate between “quality goaltender” vs. “bad team,” our rankers clearly fall on the side of “quality goaltender.” Gibson was ranked first by one team player personnel executive, and 14 voters had him in their top five.

“I don’t love him, to be honest with you, but the body of work made me put him on this list,” one NHL coach said.

Rask is having a downtick season statistically with a .907 save percentage, but last season’s Vezina runner-up (and the winner of that award in 2013-14) remains massively popular with his peers and NHL executives.

Rask received one second-place ranking, five third-place rankings and four fourth-place rankings. He was in the top 10 on 18 of 20 ballots, with a defenseman and a forward leaving him off their list entirely.

As you can see, there’s a discernible gap in the point totals between the top five and Markstrom. He’s another goalie who saw his numbers drop from last season to this one, as he has played to a .901 save percentage and is barely above replacement level in deeper stats in his first season with the Flames. But his play last season, as the last line of defense for the Vancouver Canucks in the regular season and the playoffs, clearly made an impression.

“He’s a heck of a goalie. Really good,” said an NHL defenseman who had him seventh.

No one is going to say that Hart is having a good season — especially the Flyers. “Carter is a young guy. He had some success last year. This year, he hasn’t played at the same level, there’s no question,” said Flyers GM Chuck Fletcher.

Hart’s .871 save percentage and 3.92 goals-against average through 23 games aren’t encouraging — he also has a league-worst minus-18.9 goals saved above average — but the majority of our voters still believe he has the goods. Five voters had him ranked in their top five, including one veteran goaltender.

That was a little too rich for one coach, who had him ninth. “Hart hasn’t earned it quite yet,” he said. Based on this season, that’s probably accurate.

The Panda is 6-1-2 in nine appearances this season, but clearly hasn’t been himself, having missed a chunk of the campaign with concussion issues. Lehner has a .912 save percentage.

But as with other cases, our panel felt that his past three seasons of dominant goaltending for the Islanders, Blackhawks and Golden Knights were enough to place him eighth here. For goalies who have played at least 2,500 minutes over the past three seasons, Lehner was second in goals saved above average per 60 minutes (0.534), per Evolving Hockey.

Kuemper hasn’t had the best season, both in stats (.914 save percentage) and in his ability to stay in the lineup. But he had built a lot of good will in the previous two seasons, posting a .925 and .928 save percentage, respectively, in those campaigns. But it was his performance in the postseason bubble last summer that really opened eyes to his brilliance, twice making 49 saves in Coyotes’ playoff wins.

“His name comes up in trade rumors because he’s incredibly valuable [to Arizona]. Which is why he’s still there,” said one GM.

Fleury’s had a notable bounce-back season, going 23-7-1 in his first 26 appearances with a .924 save percentage. He’s back to making dramatic saves and being a difference-maker on an already tremendous team, adding over three wins to the Golden Knights’ total based on his play.

That he finished 10th here shouldn’t be a surprise: If there’s one constant in Fleury’s career, it’s a lack of appreciation from the league at large. He has never been a Vezina finalist, with his highest mark coming in 2018-19 when he finished fourth. He was the primary starter on four Stanley Cup finalists and won the championship in two of those runs, but Fleury is rarely put on the same tier as the league’s elite.

“He’s a world-class goalie, and he’s been one for a long time,” said one player.

What the goalies said

Before getting into honorable mentions, we wanted yield the floor to the three goaltenders we surveyed, all of whom have several seasons of NHL experience. We were curious if their cumulative score rankings were that far off from the other 17.

Here are the rankings from the masked men in our survey:

No changes in the top four, but Rask falls from No. 5 to No. 7, behind … Freddie Andersen, who just missed the overall top 10 by one point behind Fleury.

He’s the only addition to the goalies’ goalie list, as Lehner received only one 10th-place vote among our three netminders.

The rankers were given a list of 21 goaltenders. It was generated at the start of the season, so newbies like Vitek Vanecek of the Washington Capitals, Kevin Lankinen of the Chicago Blackhawks and Kaapo Kahkonen of the Minnesota Wild were left out of the pool. So were Canucks goalie Thatcher Demko and Panthers goalie Chris Driedger, as it was unclear at the time how much playing time they would receive.

1. Andersen was the clear runner-up to the top 10, but every goalie in the pool received at least five points in the voting. After the Leafs’ netminder, the next highest vote-getters were a tie at 24 points between Ben Bishop of the Dallas Stars — who far outranked crease-mate Anton Khudobin (6) in the voting — and oft-maligned Florida Panthers starter Sergei Bobrovsky, who is finally starting to find his footing with a 15-5-2 record and a .910 save percentage.

On Bobrovsky: “I think Bob is good. He benefited from playing on a top-5 defensive team year after year [in Columbus], then he went to Florida and he’s not ‘good’ anymore. But I like him,” said another NHL coach.

2. Two goalies having very good seasons for very good teams didn’t make the cut. Philipp Grubauer, who is 23-7-1 with a .929 save percentage, only garnered a seventh-place vote, an eighth-place vote and two 10th-place votes. Only one of our goalies had him in their top 10, at No. 10.

New York Islanders goalie Semyon Varlamov, who is 15-7-3 with a .919 save percentage, fared slightly better, with 10 points. “He got punted from Colorado, ended up with the Islanders and now look at him,” said a coach.

3. While this list has its share of legacy picks, there was one young goalie who got support: Rangers rookie Igor Shesterkin, who finished above five veterans in the ranking. “He has the talent to be in the top five, so I had to put him on this list,” said an NHL coach.

4. Finally, there was only one goalie to get a No. 1 ranking and not make the top 10: St. Louis Blues netminder Jordan Binnington, who was ranked first by a veteran forward. Otherwise, Binnington received a seventh-, an eighth- and two ninth-place rankings. Take this as you will, but none of the goalies we surveyed had Binnington in their top 10.