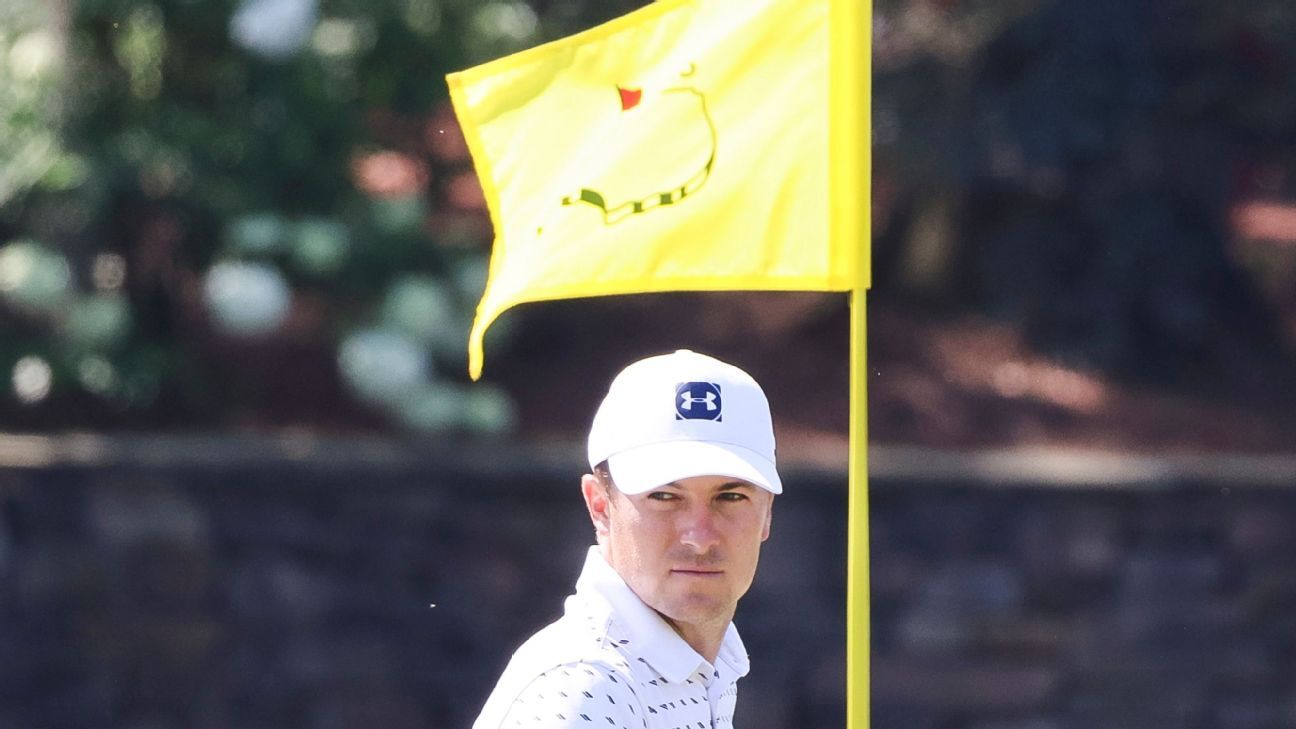 AUGUSTA, Ga. — Look through the list below. There are lot of different players in this 2021 Masters who could walk away with the green jacket and it wouldn’t surprise you. There is Dustin Johnson, the defending champion who torched the place just five months ago in a one-time-only fall Masters. There is Justin Thomas, who recently won the Players Championship. There are other popular choices, like Jordan Spieth, Bryson DeChambeau, Jon Rahm and Rory McIlroy. There are a couple of wild-card picks.

That’s the beauty in the depth of professional golf right now. It’s also what makes the Masters so special, that no game is favored. Anybody who plays well, handles the pressure and makes a few putts can win.

So here is who we have winning:

Matt Barrie, ESPN
Winner: Justin Thomas
Why he’ll win: Like his overall game and status among the world’s best, Thomas has slowly been ascending the Masters’ leaderboard each year he’s played since 2016. And since 2018, he’s found himself inside the top 20, including fourth in November. This says JT now has comfort and familiarity with how to play this major and this course. Add to that his win at the Players, and it’s a perfect recipe of confidence and game plan for DJ to give JT his first green jacket.

David Bearman, ESPN Sports Betting
Winner: Cameron Smith
Why he’ll win: Anytime you have “first player in Masters history” attached to your name, it gets my attention. Smith became the first to have all four rounds in the 60s in his runner-up finish in November. No one was catching the runaway DJ train, so T-2 was as good as it was going to get for the rest of the field. Add the fact that Smith finished T-5 two years prior and you have a youngster who has figured out how to get around this course. He finished fourth at the Genesis and T-11 at WGC Workday Championship at The Concession, where a third-round 77 knocked him out of the lead. He’s in the top 25 in strokes gained: total, putting and around the green, all perfect for the challenge of Augusta National.

Michael Collins, ESPN.com
Winner: Jon Rahm
Why he’ll win: All morning I kept trying to think of who the winner was going to be and I couldn’t get the movie “Rocky II” out of my head. When Adrian is in the hospital and wakes up. Rocky is there with her and holding their new baby and she says, “There’s one thing I want you to do for me. Come here.” Rocky leans in close. “Win … WIN!” Jon Rahm, whose wife, Kelley, gave birth to their first child last week, is winning his first major this week. And y’all need to go watch Rocky II right now.

Michael Eaves, ESPN
Winner: Collin Morikawa
Why he’ll win: Great ball-strikers always have a chance at Augusta. Right now, Morikawa is the best iron player in the world. He’s first in strokes gained: approach, third in strokes gained: tee-to-green, fourth in birdie average and fifth in greens in regulation. He’s far from a bomber, but I’ll take his 6-iron against most guys’ 9-irons.

Chris Fallica, ESPN Stats & Information
Winner: Justin Thomas
Why he’ll win: He’s improved his finish each year at Augusta National, and there aren’t many iron players out there like him right now. I expect these greens to be like glass after the score-fest last fall and JT’s iron play will offer him a big edge. He also just won the Players and should have a ton of confidence in his game right now. Few players have the ability to grind it out on Thursday and Friday and then go super-low on the weekend like JT.

Charlotte Gibson, ESPN.com
Winner: Jon Rahm
Why he’ll win: It’s simple: Life is good for Jon Rahm right now. This weekend, Rahm and his wife, Kelley, welcomed their first child, a boy named Kepa Cahill Rahm. In an Instagram post, Rahm said, “Without a doubt the greatest day of my life!” And call me crazy, but it feels like we could have another Danny Willett situation on our hands (five years ago, Willett won the Masters just days after the birth of his son). And if that’s not a good enough reason to pick someone to win their first green jacket, Rahm’s three straight top-10 finishes at Augusta and No. 3 ranking should do the trick. It feels like Rahm might experience the second-greatest day of his life this week.

Bob Harig, ESPN.com
Winner: Rory McIlroy
Why he’ll win: For once, Rory can play without pressure. Certainly there is the self-imposed variety, but not many are going to give McIlroy a chance given his play of late and the fact that he’s brought on a new coach Pete Cowen. And yet, McIlroy never seemed that far off. Perhaps he plays Augusta National with lower expectations and sees the results show up immediately. McIlroy is more than capable of putting up the low numbers, despite his recent struggles.

Doug Kezirian, ESPN Sports Betting
Winner: Dustin Johnson
Why he’ll win: I hate going with the obvious pick, but he’s the betting favorite for a reason. He dominated the field at Augusta in November, and I chalk any recent struggles to boredom. He’ll be ready and focused for a major.

Peter Lawrence-Riddell, ESPN.com
Winner: Dustin Johnson
Why he’ll win: He hasn’t played great in his last three starts — T-54, T-48 and T-28 — and repeating at Augusta after just winning there less than five months ago is a tall task, but DJ’s track record says he can become just the fourth player to win back-to-back Masters (Jack Nicklaus, Nick Faldo and Tigers Woods are the others). He’s finished T-10 or higher in his past five starts at the Masters, so he should be in contention all week and I’m looking for a return to Augusta to get DJ back in the winner’s circle.

Anita Marks, ESPN Sports Betting
Winner: Bryson DeChambeau
Why he’ll win: This is a difficult year to predict a Masters winner. The metrics needed to win at Augusta are distance, strokes gained around the green, the ability to scramble, par-5 scoring and putting. This year more than ever, putting will be the most important factor, considering the greens will be a lot faster and firmer than ever. Word is that Augusta folks were not happy with the way Dustin Johnson slayed their track back in November (record-setting 20 under), and this week’s greens will be faster than ever. DeChambeau checks several boxes, along with being one of the most cerebral golfers on tour, but I’m rolling with Bryson because of his putting skills (top five on firm and fast bentgrass his last 24 rounds).

Andy North, ESPN
Winner: Jordan Spieth
Why he’ll win: He loves Augusta National, has great memories there, he has his confidence back and he’s making putts from all over the place. Plus, this would be a great story.

Nick Pietruszkiewicz, ESPN.com
Winner: Tony Finau
Why he’ll win: So I can’t make the mess I usually make and pick Rickie Fowler. He’s not here. So I’m rolling with Finau, who been here three times and has two top 10s. He’s felt the Sunday heat; he was in the last group and saw Tiger Woods win in 2019. He has just one victory, the 2016 Puerto Rico Open. He should have more by now. He gets the biggest one of his life this week.

Mark Schlabach, ESPN.com
Winner: Justin Thomas
Why he’ll win: He has been trending in the right direction every year he has played the Masters. Augusta National is a second-shot course, and few players are better than JT when it comes to approach shots. He won the Players Championship for his 14th tour victory and then had an early exit at the WGC-Match Play, so he’ll be motivated to play well here. With how well he has played in recent seasons, the 27-year-old should have more than one major by now. On Sunday, he’ll add his first green jacket to his 2017 PGA Championship victory.

Marty Smith, ESPN
Winner: Jordan Spieth
Why he’ll win: I talked to Andy North. He told me Jordan Spieth would win. So there you go.

Tom VanHaaren, ESPN.com
Winner: Jordan Spieth
Why he’ll win: I am 100 percent overreacting to Spieth’s win last week, and I’m here for all of it. Give me Spieth putting on a green jacket Sunday, an emotional speech in Butler Cabin about the last four years and perseverance, then some hilarious celebration photos after.

Scott Van Pelt
Winner: Justin Thomas
Why he’ll win: The trend line at for him at Augusta is very good. The Players win only adds confidence. (I’m also trying to take pressure off Xander Schauffele, whom I have picked about eight times in a row).