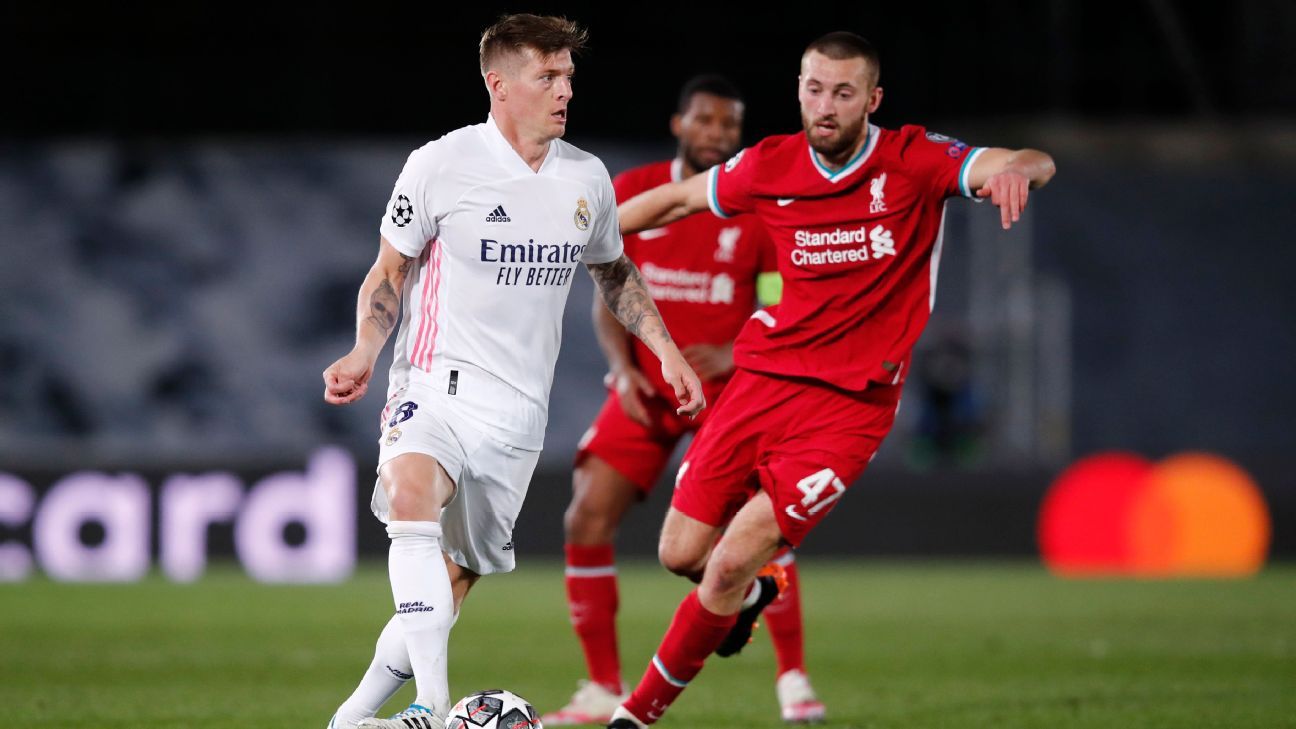 Football fans and pundits seem to like to turn everything into a punchline these days but please feel free to sneer at those who quickly joke: “Well Liverpool got a taste for thrashing La Liga teams at Anfield judging by that Barcelona time in the 2019 semifinal so… no big deal here!”

Let’s be crystal clear — while this scoreline (3-1 loss at Real Madrid) is significantly better than the 3-0 (very nearly 4-0 if it wasn’t for Ousmane Dembele‘s ineptitude in the final seconds) defeat at Camp Nou two years ago, Jurgen Klopp’s team played infinitely, almost indescribably better that night in Catalunya.

That was a night when you had to ask yourself: “How the hell did Liverpool not win at Camp Nou… never mind lose 3-0?”

This was a match when the Premier League’s reigning champions and 2019 Champions League winners were mostly anodyne and often atrocious.

Liverpool lacked not only football basics but either discarded the central parts of their DNA ever since Klopp took over — or felt utterly unable to play with the rock ‘n roll hunger and intensity which made them both famous and successful.

A night when if Trent Alexander-Arnold hadn’t excelled twice, to blunt huge Marco Asensio‘s opportunities, this tie would have been put to bed, given a soporific story and begun to snore gently.

Alejandro Moreno breaks down how Vinicius Junior was able to influence Real Madrid’s 3-1 win vs. Liverpool.

Using the word “atrocious” is strong. But it’s merited here not only by the normal Liverpool standards but by any basic football barometer.

Football lives and breathes analysis now, especially in an era where it seems that every club with a moderate budget could tell you what opposition players had for breakfast and where they are planning to holiday next summer — let alone their strengths and weaknesses on the pitch.

Thus every single member of Liverpool’s coaching and playing staff will have known three very specific things about Toni Kroos.

Firstly, if you gift him time and space he can launch a football onto a thin dime 75 metres away and, honestly, if you asked him to perform that trick blindfolded he’d take your pocket money off you if you bet against him managing it.

Secondly, if he’s properly pressed he can’t pull off either of those tricks successfully.

Thirdly, if you run “beyond” him, either with or without the ball he’ll disdainfully opt not to run with you in the full expectation that someone else, often Casemiro, will do the blue collar work of chasing, harassing and tackling.

When Liverpool allowed Real Madrid to settle their nerves (remember they were missing Sergio Ramos, Dani Carvajal, Raphael Varane and have yet to harness the huge potential of Eden Hazard‘s partnership with Karim Benzema) and to establish a commanding two-goal lead, it was as if Liverpool’s players had never seen or heard of Kroos before.

Their pitch positions, their body language, their languid complacency were like: “Yeah! Go on Blondie! Just you try and launch a heat seeking through ball against our world class defence.”

The first one is remarkable. Especially given that Liverpool’s owners are Fenway Sports Group. Their Boston offices are located about 30 miles from the home of NFL team New England Patriots in Foxborough, which is a place of reverence because the Bill Belichick-Tom Brady era has shown what a truly great quarterback can achieve.

Which begs the question: Who thought it was a good idea to let Kroos quarterback Madrid into such a commanding position?

The World Cup winner with Germany in 2014 dropped deep for that first goal and then did with his right boot what Brady does when he launches laser-guided touchdown passes.

Not one of them is positionally well-placed, not one of them communicates to the others that Kroos has to be closed down, not one of them makes a despairing run to try and prevent Madrid’s No. 8 from having time to make a sandwich, phone his wife, plot the geometry of his world-class pass and then deliver the ball not simply onto Vinicius‘ run but onto the Real Madrid crest on the left of his chest.

It was that good. Galileu would have been proud.

Those three players, whose job was to make life uncomfortable, looked to have faces which matched the red colour of their jerseys as they watched the young Brazilian score brilliantly for Real’s first on the night.

Klopp’s tolerance seemed to boil over Kroos once again deep inside his own half but this time over towards the left, took possession again.

He must have expected to hear the thunder of hooves. His lizard brain must have been telling him: “Look out, you’re about to be trampled by a typical, energetic Klopp-Liverpool press … get ready to offload the ball to safety and assume the recovery position!”

I swear I saw disbelief on the Klopp’s face when he peeked up and around and realised that the same thing was happening again.

Splendid isolation and nobody doing a damn thing about it. No stampede.

This time it was the duty of both Mohamed Salah and Naby Keita to, in football terms, asphyxiate Madrid’s pass-master. Negligence reigned again.

This time Kroos was a millimetre or three short in his delivery to Asensio.

But Alexander-Arnold was off balance, didn’t judge the flight of the pass well enough to head it clear instead of helping it on to the Mallorcan who scored his third goal in three matches with a juggler’s flick over the advancing Alisson whose aim wasn’t true and who left Asensio bulging an empty net for 2-0.

If you subtract the two minutes of celebration for Madrid’s second goal, and the minute or so it took to switch Thiago for Keita once the former Bayern Munich and Barcelona player was ready in enter, there were about three minutes between Keita failing to close down Kroos and him being whipped off the pitch by Klopp, who’d seen enough.

When asked after the match about Keita’s substitution, the decent and always honest Liverpool manager admitted: “No he’s not injured, it was tactical. I know it’s a big story now, but I could have taken off two or three other players instead because we didn’t play good football tonight.”

From a neutral point of view, so goodness only knows how committed Liverpool lovers (long haired or not) feel, it emphasised how out of character Liverpool were performing that the second half proved that they did know precisely where Kroos’ Achilles heel lies.

Liverpool’s goal stemmed from the thing that Zinedine Zidane’s on-field German hates the most — being asked to turn, chase and sweat.

Wijnaldum, no doubt chastened by what had happened to his departed midfield cohort Keita, ran into space to receive the ball, noticed that Kroos wasn’t interested in tracking him and, so, set off on an odyssey.

Across green meadow he skipped, easily leaping and gamboling beyond Casemiro’s lunge and perhaps the paper-thin challenge Eder Militao offered up to Jota once Wijnaldum fed him the ball was a hint that Madrid’s denuded defence were even more prone to embarrassing themselves — if the visitors kept on doing the things they knew, deep down, they should.

Jota’s work fed Salah and the Egyptian doggedly fished the ball out of a tangle of legs to ram it in off the bar.

And then Liverpool took a breather. They didn’t keep the tempo up, they didn’t really manage another shot on Thibaut Courtois‘ goal but, above all, they didn’t test the chin of the Spanish champions.

As they flew home to John Lennon Airport on Merseyside it will have added salt to their wounds if they could hear the sounds of the great man’s hit single: “Imagine”.

Imagine that, at 2-1 down, England’s champions had burned their lungs, strained every muscle, chased, harried and pursued Los Blancos like puppy dogs chase loose tennis balls? Imagine they’d ‘gegen-pressed’ like in days of old?

What the last fifteen minutes now tell us is that Liverpool, badly though their manager admits they played, could actually have won the match like that.

Long before the final whistle seeming to Madrid to be taking unfeasibly long to arrive Zidane’s team were, to use a British word, knackered.

They missed tackles, they gifted the ball away, they were hemmed into their own final third not because it was their adopted strategy but because their hero players, Benzema, Luka Modric, Kroos, Casemiro, Lucas Vazquez, were spent.

They key was that Liverpool were too pale an imitation of themselves after making 2-1 and went to sleep for the goal which gave Madrid a cushion advantage which they might defend successfully at Anfield next week.

From a throw-in, for goodness sake, (page one of the ‘How to defend manual’) Fabinho lost focus, falling victim to the thing you hear yelled on the sideline of every amateur match anywhere in the world. “Keep your eye on your man …. don’t go chasing the ball!!”

Somehow Fabinho committed the capital sin of being woefully misplaced to close down Modric on the edge of Liverpool’s box when, at all costs, the visitors had to defend tigerishly.

Fabinho’s position, balance and attention-span were all kaput by the time he realised he’d fed the beast and Vinicius, enjoying probably his best game yet for Real, first-timed Modric’s pass through Phillips’ legs and under the dive of international teammate Alisson.

Klopp said, after acknowledging that Salah had given Liverpool a lifeline: “If you want to go to the semifinal you have to earn the right to do so. “We didn’t do that — especially in the first half.”

They aren’t down and out. But to go back to the top of the report don’t compare this to when Liverpool mauled Barcelona to within an inch of their dignity a couple of seasons ago. Times, and energy levels, have changed and that ferocious, messianic atmosphere, which Barcelona players still talk about reverentially, will be absent. Sadly.

A couple of things keep this tie alive. The away goal and the very evident fact that, late in the game, Madrid’s key players were running on empty.

Next up they have Barcelona in an ultra-crucial Clasico on Saturday and there’s no chance of Ramos, or presumably Varane, return next week.

But, all that’s a week away.

For the moment, and even though Liverpool were largely willing co-conspirators in their own downfall, this was yet another night when Zidane, his hugely experienced on-pitch lieutenants and one very special young buck, 20-year-old Vinicius, proved that if you drop your guard against them they’ll leave you behind in their wake and be heading for the next round in the blink of an eye.

It’s Madrid. They think this tournament and the trophy belong to them — can Liverpool disabuse them of the notion next week? Not like this.