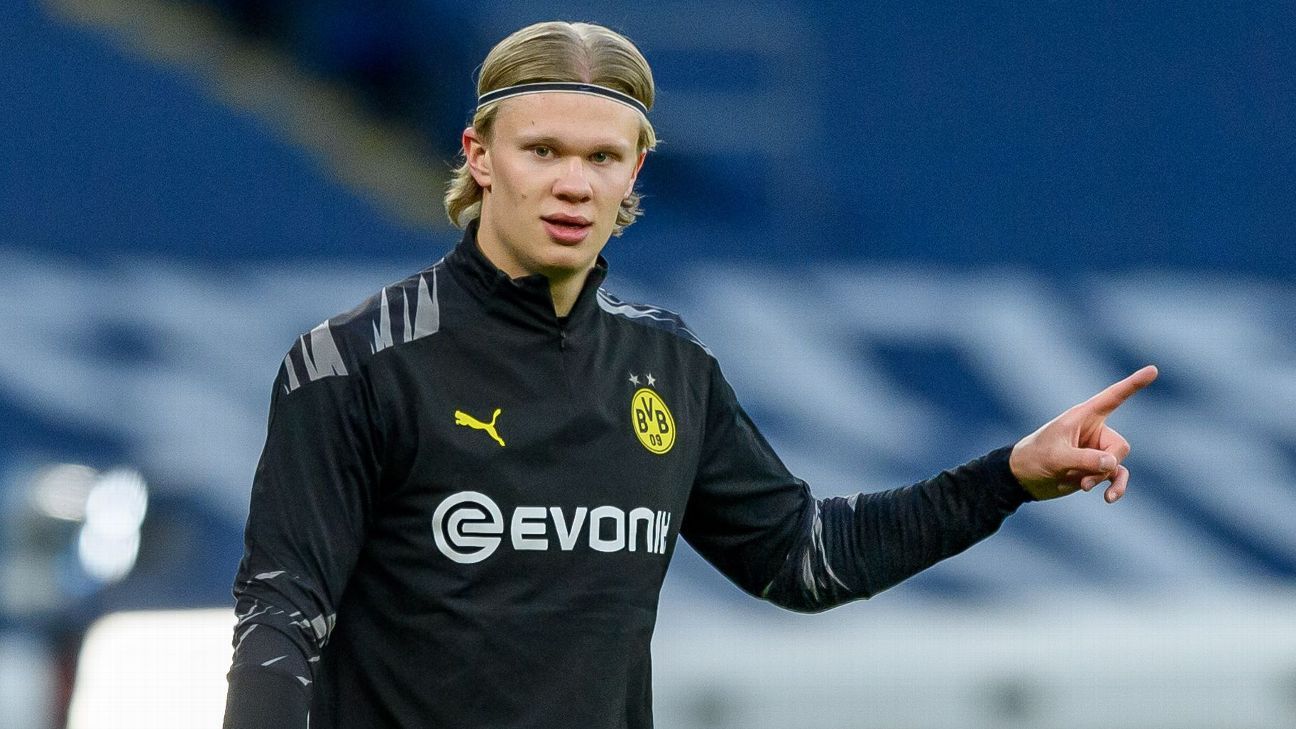 The Erling Haaland roadshow is in full swing, just as it was nearly 18 months ago, pre-pandemic. Back then, he was a man-child of a center-forward who was banging in goals for Jesse Marsch’s RB Salzburg in the Austrian Bundesliga (16 in 14 games) and the Champions League (eight in six) and “Team Haaland” — his dad, Alfie, and his adviser, super agent Mino Raiola — were peddling his services to clubs around Europe. Now, at 20, he’s still banging in goals in the Bundesliga (albeit, the German one, for Borussia Dortmund, several steps up the food chain) at a more than healthy clip (21 goals in 22 games) and the Champions League (10 in seven) and Team Haaland is making the rounds, both in person (as in this trip to Barcelona last week) and via Zoom.

Some, like former Germany and Liverpool midfielder Didi Hamann are outraged — “The behaviour of Haaland’s father and Raiola is unspeakable and disrespectful …” he told Sky Germany — but in fact, it’s the natural next step for a guy whose career and development have been meticulously planned from an early age. Not quite to Todd Marinovich levels, but not far off.

And because, just as he did when he left RB Salzburg in January 2020, he has a relatively affordable release clause that kicks in from June 2022 and amounts to far less than his value in the open market, Team Haaland holds all the cards. That clause — thought to be around $90 million, when his market valuation is easily twice that — has created a twisted economic incentive mechanism whereby Borussia Dortmund are better off selling him this summer even though it would probably suit him to stick around for another season.

My colleagues Stephan Uersfeld and Rodri Faez reported that Borussia Dortmund have fixed Haaland’s transfer fee at €180 million ($213.8m). Given that’s the asking price, you would imagine Dortmund might settle for a little less, particularly if they fail to qualify for next season’s Champions League and therefore have to settle for Europa League revenue, which would likely be some €60m less. (Dortmund are seven points from a top-four spot with seven games to go.)

So call it €150m ($180m). The problem is that there are very few clubs who can make that sort of commitment right now, without either a) taking their debt and losses to unsustainable levels b) shedding talented players to raise cash and cut their wage bill or c) some combination of the above. Never say never, because football clubs have taken huge risks in the past and will continue to do so in the future, but it’s hard to see how anyone with the exception of Manchester United, Manchester City or possibly Real Madrid can even contemplate such a move. (Maybe Barcelona, too, but only if Lionel Messi‘s near-€100m contract, which expires in June, isn’t renewed.)

Even then, that only covers the transfer fee. You need to then pay Haaland’s salary and commissions to the agents and intermediaries to make it happen. Raiola took to Twitter to describe as “fake news” reports that he was demanding €20m ($24m) each for himself and for Haaland’s father, plus an additional €30m net (which is around €55m/$65m gross) a year for the player. Maybe so. But even if it’s half that, assuming a five-year deal, you’re still looking at another $180m, give or take, through 2027.

And this is where economic incentives and game theory come in. Because if it would take at least $360m — and probably a lot more… remember, it’s the agent, Raiola, saying the wage and commission demands were “fake” — to land Haaland this summer, once the release clause kicks in, the landscape changes dramatically.

Dortmund’s fee would come down from the market rate of €150m ($180m) to a reported €75m ($90m). That is a massive savings for any buying club and some of that savings would sweeten the pot for Haaland himself, as well as for his dad and Raiola. We often forget how linked transfer fees and salaries/commissions really are; it’s why free agency is such a boon for agents and intermediaries, too. If you don’t have to pay a transfer fee (or, in this case, only have to pay a sharply reduced fee, you can pay the agent and the player more).

There’s more. You can reasonably expect that a year from now, the number of clubs who can take a serious run at Haaland will grow, partly because the effects of the pandemic will (hopefully) have worn off, partly because the fee will have come down. The more interested parties you have, the more you can generate a bidding war. The bonus here for Haaland is that rather than bidding against each other and driving up the price due to Dortmund, they’ll be bidding against each other and driving up the salary due to him (and his dad, and Raiola).

That’s the power of a release clause, and Team Haaland understand it well.

It’s not just about money, either; they appear to be genuine when they say it’s about his development. When he left his tiny hometown club, Bryne, at 16, he could have gone just about anywhere and, indeed, through his dad’s connections, he was looked at by most to the continent’s big hitters. But he chose to stay in Norway, moving up to Molde. At 18, he again turned down suitors from Europe’s elite to join Salzburg for €8m ($9.5m).

Jurgen Klinsmann joins ESPN FC to have his say as to where Erling Haaland should play next season.

Why Salzburg? They had a great track record of development, he knew he could get playing time and they were part of the Red Bull organization, which includes Leipzig in Germany. And crucially, they agreed to a release clause of €20m ($24m). It was a deal that suited all parties: Haaland got to grow while maintaining the leverage to leave at a reasonable price, Salzburg (to use a VC term) got to 2.5x their investment.

That’s how things are likely to play out again at Borussia Dortmund. They can tut-tut all they like over the Team Haaland roadshow, but the fact is if he moves in 2022, they will not only get the benefit of one of the world’s top five center-forwards for two and a half seasons, they will be able to sell him at a hefty profit. Will it be the 3.75x the transfer fees — bought at €20m, sold at €75m — suggest? Probably not. According to reports, they splashed out an additional €25m in total commission to Raiola and Haaland’s dad, so it would be more like a 1.7x. Still, it’s not a bad deal. Having benefited from the release clause/Raiola method, you can’t complain when it’s used against you.

Germany’s top division is on ESPN+. Can Bayern Munich stay on top, or will the likes of Borussia Dortmund and RB Leipzig take over?
ESPN+: Live games and replays (U.S. only)
Bundesliga home | Schedule | Standings

So why is Raiola so public in pitching Haaland around the world when it suits him to stay put another season? There are two possible reasons.

One, there might still be a beneficial deal to be made here and now. Maybe, if Dortmund continue to nosedive in the Bundesliga, the asking price will come down further. Maybe somebody will come up with a $360m-plus package that suits everyone, heck maybe it will be a lot more: we can boil it down to numbers, but this is still a business where folks make decisions based on emotions and popularity and gut feel and sometimes they’re irrational.

Maybe — and this would be a bonanza for Team Haaland — somebody will want him so badly that they’ll grant them yet another release clause, one that will feel like a bargain in a few years’ time. Who knows? You don’t know unless you ask. Raiola is covering his bases, and it suits Dortmund just fine.

The other — and the one cynics are loath to believe (wrongly, in my opinion) — is that Raiola and Haaland’s dad are just doing their homework just as they’ve always done. They’re trying to figure out what the best environment might be, whether it’s next season or, more likely, 2022-23.

Start with the manager. Pep Guardiola’s deal with City expires in 2023. Ronald Koeman’s at Barcelona in 2022. Zinedine Zidane has walked away from Real Madrid before and, at the Bernabeu, managers continuously hang by a thread. How likely is it that Ole Gunnar Solskjaer will stick around at Man United? What might Juventus be planning post-Cristiano Ronaldo, or Bayern post-Robert Lewandowski, or Paris Saint-Germain if Kylian Mbappe or Neymar move on? Might these clubs come into play?

Haaland’s next move will be critical to his career. He has the luxury — given that he grew up in privileged surroundings and has already earned plenty (between him and his dad, north of $50m by the time June 2022 rolls around) — of not being motivated solely by money at this stage of his life. And he has the benefit of a release clause, which turns usual football economics on its head. For now, at least, it’s in the club’s interest to sell, and in the player’s interest to stay.