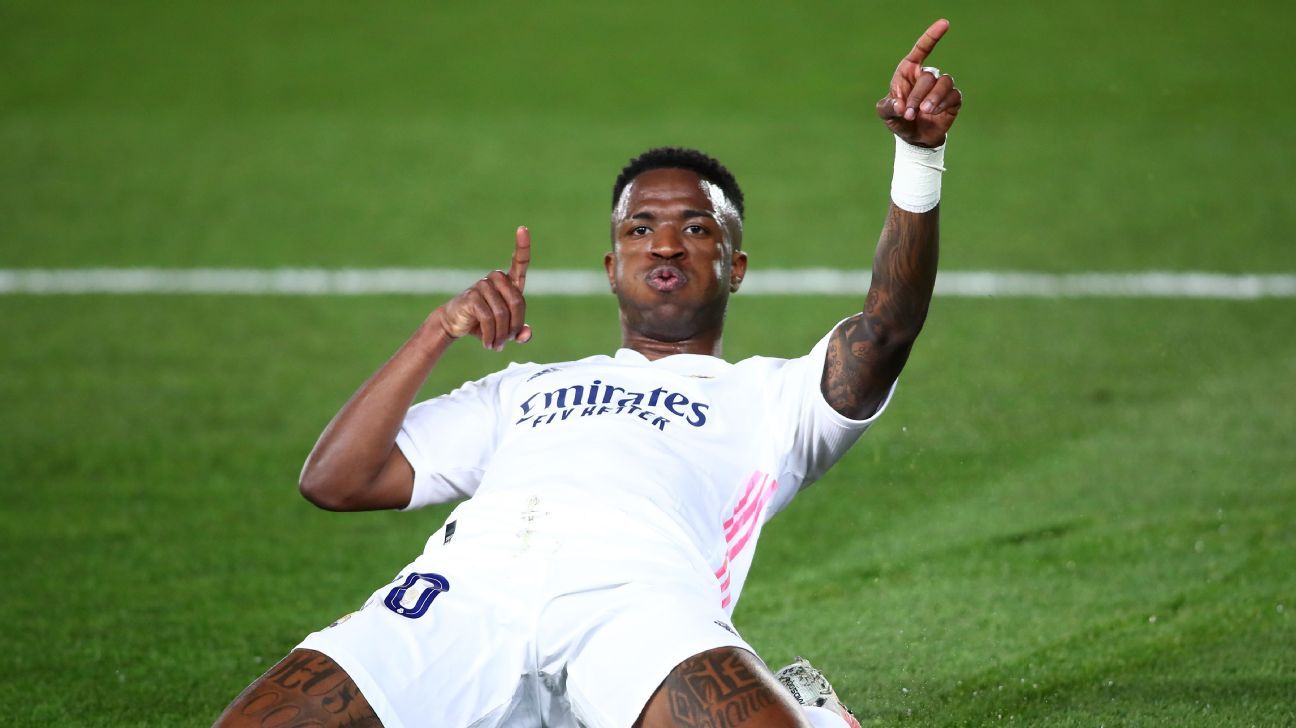 Well how about that for fun? The Champions League quarterfinal, first legs, produced a ton of excitement and drama. Some big results, too: Real Madrid shrugged off key defensive absences (Sergio Ramos, Raphael Varane) to thump Jurgen Klopp and Liverpool, while Paris Saint-Germain enjoyed a bit of revenge against Bayern Munich, following last season’s 1-0 defeat for Neymar & Co. in the final to the Bavarian giants. There was also a nervy win for Manchester City against Erling Haaland and Borussia Dortmund, while Chelsea cruised to a comfortable (kinda) win over FC Porto.

With the first legs of all four Champions League quarterfinals in the books, let’s take a look at the stats that mattered most from each match and what matters the most heading into next week’s second legs.

Real Madrid are third in La Liga and had to labor heavily to advance to the Champions League knockout rounds. Though they’ve flashed glimpses of all the obvious, expensive talent we’ve come to expect, this isn’t the most intimidating squad they’ve ever fielded. Heading into the quarterfinals, FiveThirtyEight gave Liverpool a 53% chance of advancing despite the Reds’ own laundry list of issues. 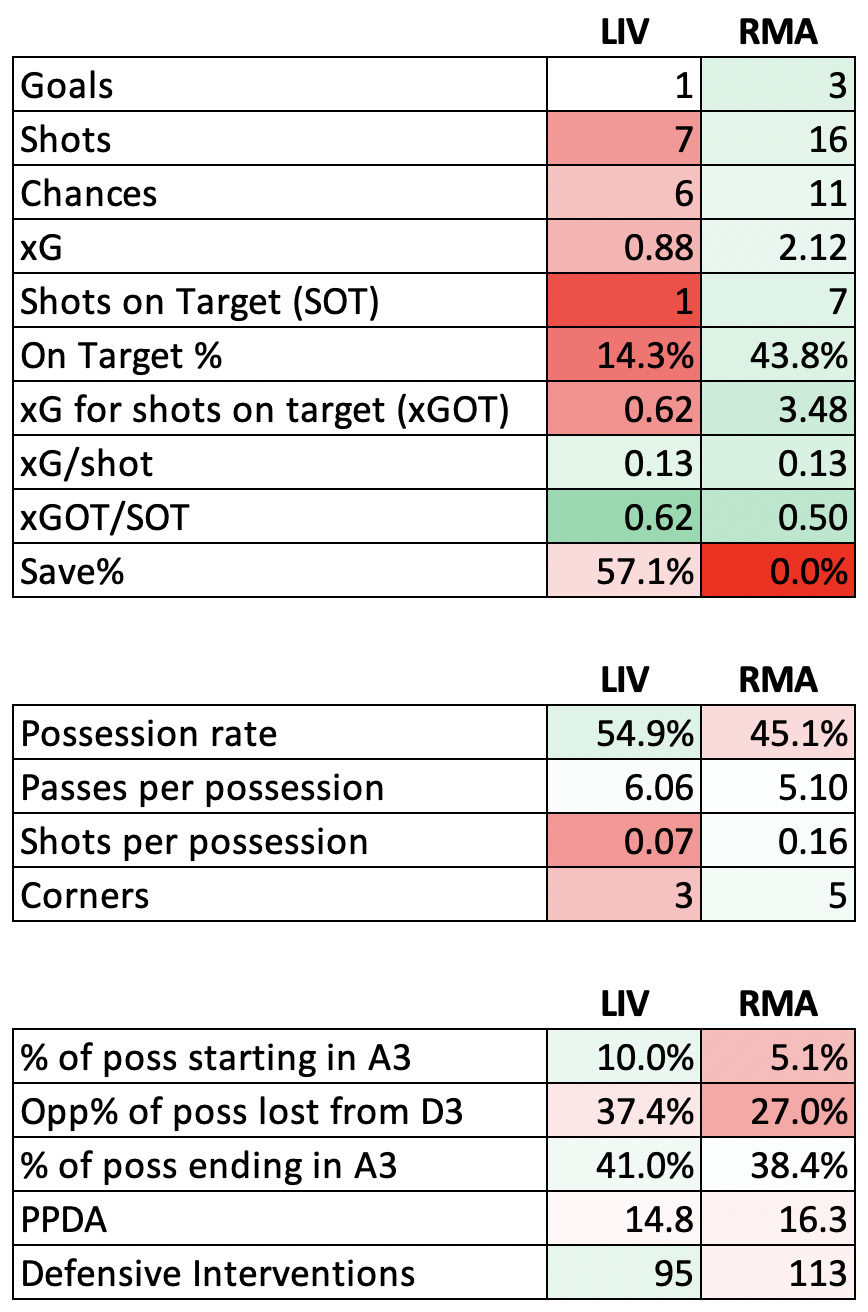 Liverpool played the first leg, however, like a massive underdog, even more than Borussia Dortmund, an actual massive underdog (18% chance of advancing), did. Everything about their approach screamed “let’s just get to the second leg down one goal.” Jurgen Klopp started neither his most press-friendly forward (Roberto Firmino), nor his most attack-minded passing midfielder (Thiago), opting for Diogo Jota and Naby Keita instead.

Klopp’s system is based on a combination of possession principles and pure defensive intensity, but in Madrid, the Reds allowed 14.8 passes per defensive action, their third-highest average of the season. (The only times they were higher: against Manchester City in November, and against an equally passive Wolves in December.) They attempted zero first-half shots and logged just two touches in the penalty area.

The good news, if you can call it that: things got better. In the second half (with Thiago subbed into the lineup), they allowed 11.6 PPDA and finished 32 possessions in the attacking third to Real Madrid’s 14. They still put only one shot on goal, and while that shot went in the net, so did a 65th-minute response from Vinicius Junior off of a throw-in. Liverpool might have been the better team, but they didn’t end up cutting their two-goal deficit.

Still, the field tilted in their direction. That, combined with the road goal they managed to score, gave them a lifeline. A 2-0 win in Liverpool would put them through, and FiveThirtyEight’s projections still give them a 20% chance of advancing.

A 2-0 win requires you to keep Vini Jr. off the board, though

Two things stood out from Real Madrid’s performance: (1) they did a fantastic job of stretching Liverpool with long, accurate passes, and (2) Vinicius Jr. was maybe their best player for the second straight Champions League match. 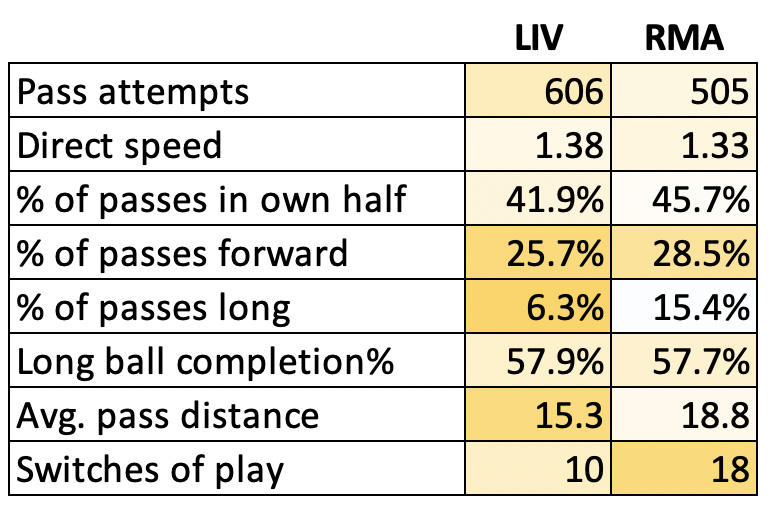 The average match features about four to five switches of play (long, mostly horizontal passes that flip the ball from one side of the field to the other) per match. Real Madrid attempted 18, including four from Toni Kroos and three each from Lucas Vazquez, Luka Modric and Eder Militao. This horizontal action stretched Liverpool’s defense and opened up vertical passing lanes; Kroos, Modric and Casemiro, Real Madrid’s aging but still technically gifted midfield, also went 19-for-25 on long balls (forward passes at least 35 yards downfield). Kroos was 9-for-9, and a long ball set up the first of two Vinicius Junior goals.

If Kroos wasn’t their best player, Vini Jr. was. He’s becoming an extremely Real Madrid player: fine in La Liga, great in the Champions League. He’s averaged 0.38 goals and assists per 90 in league play, but he’s up to 0.83 in the UCL. For the second straight knockout match (following their 3-1 win over Atalanta on March 16), he was utterly brilliant. He put two of his four shots in the net and completed 14 passes in the attacking third.

If this version of the precocious 20-year old continues to show up, Real Madrid could win the whole damn tournament.

In one sense, it’s pretty simple to prepare for Pep Guardiola’s Manchester City, as you don’t have tons of options.