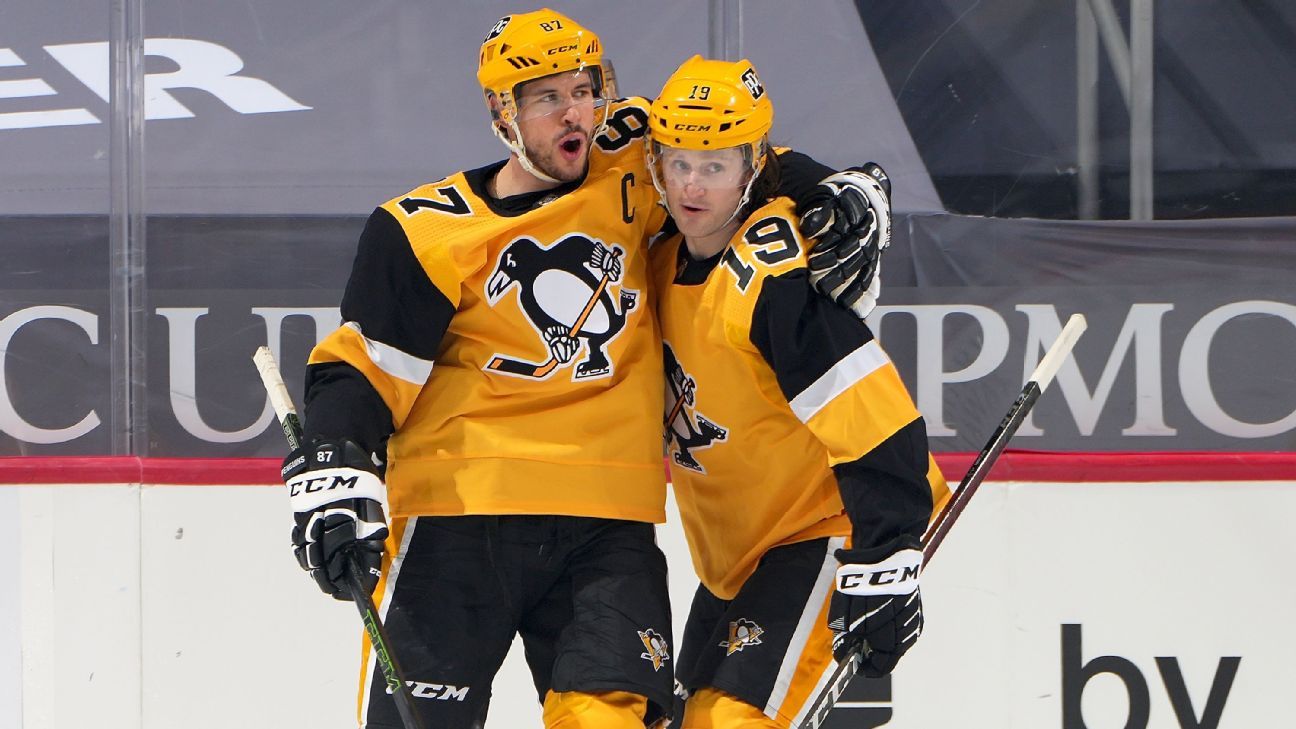 The Pittsburgh Penguins have been on a quest to win at least one more Stanley Cup with Sidney Crosby. It has been a revolving door on his line as they try to figure it out. Since the start of the 2016-17 NHL season, Crosby has played with 83 different teammates. In the past 10 seasons, that number is 153. Every player who goes to Pittsburgh knows the stakes.

“As you can imagine, from the outside, our dressing room could appear to be an intimidating dressing room to walk into, given the star power we have and the legacy these guys have built,” coach Mike Sullivan said. “But it’s just the opposite, and I think Sid is the guy who breaks that barrier down. I’ve watched this happen over and over again. When we call up young players, or even some veteran players who get traded to our team — if they are intimidated when they walk in, it’s not too long before Sid puts his arm around these guys, engages them in conversation and disarms their intimidation. He makes them feel like they’re part of the team.”

That cohesion has been on display in 2021. For the second straight season, the Penguins have endured unrelenting injury luck. Only two players (Jake Guentzel and Bryan Rust) have played in every game. Only nine players have suited up in at least 30.

The Penguins have been especially ravaged at the center position. Evgeni Malkin was just starting to find his game when he suffered a lower-body injury in a March 16 game against the Boston Bruins. Teddy Blueger is sidelined with an upper-body injury. That’s not to mention defenseman Brian Dumoulin, who missed 15 games; winger Jason Zucker, who missed more than a month; or winger Brandon Tanev, who is listed as “week-to-week” following a previous stint on injured reserve.

But Pittsburgh has trudged on. Entering Thursday’s game against the New York Rangers (7 p.m., ESPN+), the Penguins are squarely in third place in the East Division, within striking distance of the Washington Capitals and New York Islanders, against whom they have gone a combined 10-4 this season.

Once again, the Penguins are facing some adversity. After stellar play for a month — in which the goaltending tandem of Tristan Jarry and Casey DeSmith was tops in the league — Pittsburgh has allowed 15 goals in its past two games, both losses. But looking at the big picture, the Pens are on the right track.

“It’s been unfortunate that we’ve been hit with it all at the same position at different parts of the season, but I really like how the guys have responded,” Sullivan said. “Guys that have been given opportunities have stepped up and really taken advantage of it. … And our veterans, our core guys, have been great leaders through this. I’ve watched these guys for five-plus seasons, and they never look for excuses. They always have an expectation to win, and believe we have enough to win, regardless of who is in the lineup. We have a lot of hockey left in front of us, and we’re well aware of that, but certainly the progress we’ve made to this point has been encouraging.”

Now Penguins fans are wondering, can all of that translate to Stanley Cup glory this summer?

Since winning back-to-back championships in 2016 and 2017, Pittsburgh hasn’t been able to quite figure it out. The Penguins finished no lower than third in the Metropolitan Division in each of the three seasons since, but they have yet to make it past the second round of the playoffs. The past two trips were especially humbling. After being swept by the Isles in the opening round of 2019, Pittsburgh lost to the 12th-seeded Canadiens in the qualification round of the 2020 bubble.

This season’s Penguins team has been fueled by some unexpected sources. One pleasant surprise, helping out with center depth, has been 27-year-old Frederick Gaudreau, who went nearly two years between games as an NHL player and is signed for just $700,000 this season. Another is Cody Ceci, the former scapegoat defenseman of the Ottawa Senators and Toronto Maple Leafs. The 27-year-old Ceci, who signed a $1.25 million prove-it deal this offseason, was made a healthy scratch just one game into his Penguins tenure.

Now, Ceci is indispensable. His expected goals for percentage of 53.46 is higher than any regular Penguins defenseman.

“We felt like Cody was a good, solid player that maybe in a different environment might have an opportunity to thrive,” Sullivan said. “We also felt like the style we play in Pittsburgh fit his strengths. It took him a little while to get comfortable. I think maybe he was overthinking it a bit early in the season. But he’s worked extremely hard. And I think he’s playing the game at a different pace now than he was when we first got him — not just physically in his skating ability, but also his processing of the game. He looks to me like he’s so much faster, he’s so much more mobile, he’s getting back to pucks quickly, he joins the rush as good as any defenseman we have.”

Dealing with a rotating cast has been all the harder considering the league’s strict COVID-19 rules, which prevent most in-person interaction. Sullivan has found himself getting creative. The coach tries to take advantage of times the team is together. For example, sometimes when the team is in the locker room getting dressed, Sullivan uses the opportunity to run some video meetings on locker room TVs.

“We also have an app called Learn to Win that we utilize,” Sullivan said. “It allows us to push information and short video meetings through, and they can see it on their iPhone at their leisure. That’s been a really valuable tool for us. We’re trying to maximize the technology we have at our disposal to interact with guys in the most efficient way.”

But some things never change. The 33-year-old Crosby is still leading the team in points (44) and trails only Ryan O’Reilly and Patrice Bergeron for faceoff wins.

“He’s constantly thinking about the game, and thinking of ways to get better,” Sullivan said. “He has an insatiable desire to be the best, right down to details whether it’s faceoffs or a one-timer from a bad angle, or some small, subtle skill on the power play from certain positions that he doesn’t think he’s mastered. He’s out working on it with our skills coach before practice.”

And every time a new player enters the lineup, Sullivan finds himself sharing the same advice. “I usually tell them not to overthink it,” he said. “As a coaching staff, we try not to overload them with too much information because we want them to play on their instincts and to trust their instincts. Sometimes less is more from a coaching standpoint in that circumstance. But our message is always to enjoy it and embrace it and take advantage of the moment.”

Which aligns with how Sullivan thinks the Penguins will get over their playoff hump this summer. Besides staying healthy, the coach said he knows how his team can keep winning come summer.

“I just think we have to stay in the moment,” Sullivan said. “We need that short-term focus on the task at hand. And then we need to apply a certain commitment to the attention to detail every day, and we’ve got to bring a certain compete level that gives us a chance to win. I think that’s how you get consistent results in this league. It’s the conversation we’ve had with our guys through the course of this year. When we play to that, I think we’re as competitive a team as there is in this league, and we’re going to give ourselves a chance to be successful.”