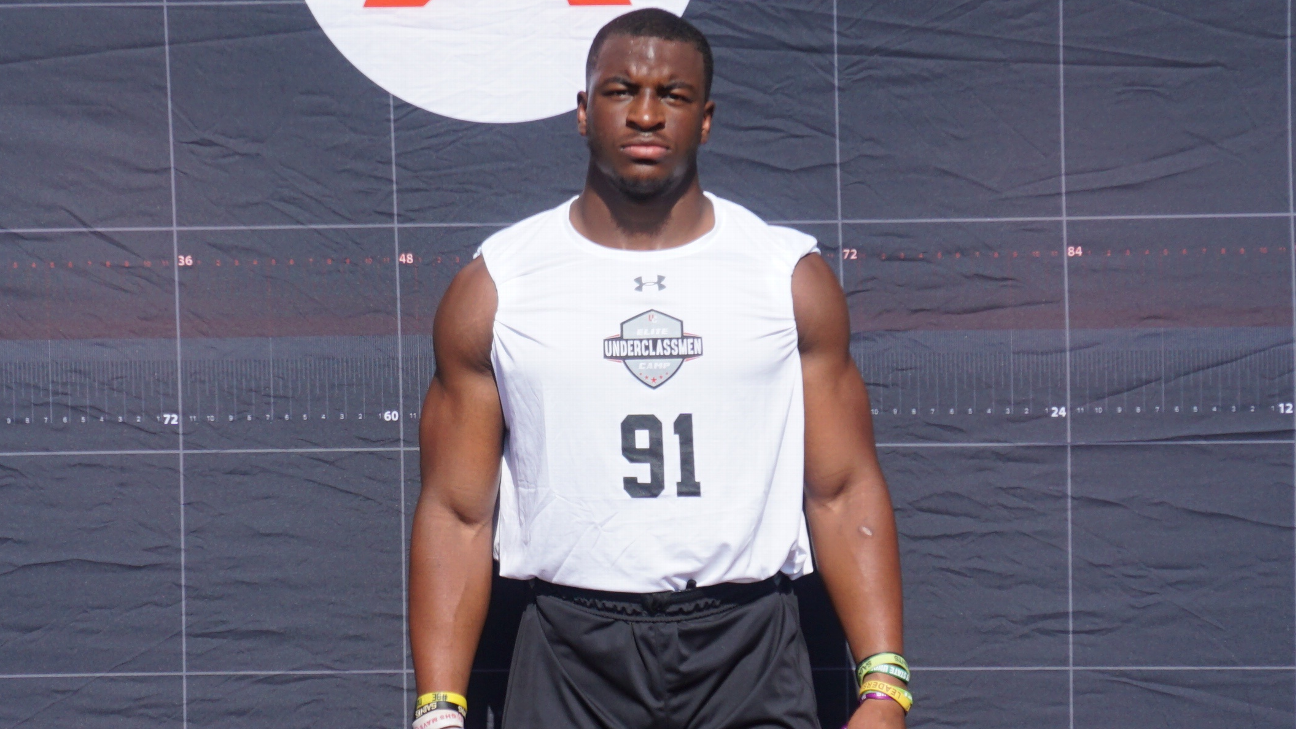 It’s time for college football recruits in the Class of 2022 to transition from the ESPN Jr. 300 to the ESPN 300. In a class that is loaded with talent at quarterback, defensive end, cornerback and wide receiver, the evaluation process presented some unique challenges due to COVID-19.

For those in the junior class who had the opportunity to play an entire season, the evaluation process was status quo, with film evaluation taking center stage over the supplementation from camps and combines.

In the case of prospects who had a limited junior season or went without a season, the camps, combines and workout videos were much more important in evaluating physical development and movement skills compared with outdated sophomore season video.

While COVID-19 protocols limited some performances, elite talent still shows up from coast to coast, with Texas having a special class of prospects and Florida and Georgia continuing to be the most talented neighboring states in the country.

We generally place high priority on corners who are 6 feet or taller and can run. Perhaps the biggest factors in upgrading the 6-foot, 185-pound Hunter to five-star status are his hands and ball skills displayed on offense. He has length and excellent high-point skills, which transitions very nicely over to defense. Plus he can turn an interception into a touchdown with exceptional speed. The Florida State commit resembles what Seminoles fans have come to expect from their secondary over decades of excellence.

Stewart moves up to the No. 1 wide receiver spot and earned his fifth star by posting a blazing 4.49 laser-timed 40 this past March and a 10.74 100 meters on the track. He’s a football player with track speed — not the other way around. He has a solid 6-foot, 175-pound frame and, pound for pound, might be the most dangerous offensive weapon in this class. Stewart has excellent hands and ball skills. As a route runner, he compares favorably with Calvin Ridley, Jerry Jeudy and Amari Cooper when they came out, which says a lot.

A onetime Texas commit, Stewart opened his recruitment back up in early March. While the Longhorns are still in the mix, several SEC programs are making a push for the receiver, including in-state Texas A&M, Florida, Georgia and Alabama.

Like Stewart, Hudson is a gifted route runner, and given his speed and quickness, he should become an elite separator at the next level. He can run by defenders in the open field, a true difference-maker who makes it look effortless. Hudson plays defense and could be a legitimate corner at the next level if given the chance. It would be surprising if he’s not a day-one contributor or even an impact player for Oklahoma.

At roughly 6-foot-4, 310 pounds, Campbell may very well end up sliding inside to guard in college, but regardless of where he might line up, he is an excellent prospect, a powerful player who can deliver a jolting pop on contact but also make blocks with mobility. This uncommitted five-star is a big body who is light on his feet. Agile with good balance, he can mirror rushers in pass protection and possesses tremendous range with ability to adjust well on the move and be a factor as a blocker at the second level. Currently leading a talented group of tackle prospects in this class, Campbell backed up his film with a strong showing at the Under Armour Dallas camp in March, standing out both in drills and during one-on-one interviews.

Campbell released his list of eight schools in late February, and from that group, Oklahoma and USC look poised to receive summer visits, if permitted. In-state Texas is also a program to watch from that group for the mobile offensive lineman.

For the third time in the past four cycles, a tackle prospect out of IMG Academy has placed among the five-stars in his class. Current Alabama standout OL Evan Neal was the No. 2-ranked OT in the 2019 class, rising Alabama freshman J.C. Latham was No. 2 in 2021, and now there’s Booker, the No. 2-ranked offensive tackle in 2022. Just a year ago, Booker was more focused on developing as a defensive tackle, but he has bought into developing on the other side of the ball and has since excelled in rising to the top. The 6-foot-5, 300-pound Booker is not only strong but is also flexible with good feet. He’s considered a player who has good focus and one who can be a leader in the future for whomever signs him. Booker has not announced a narrowed a list publicly yet, but Florida and Georgia are among the programs that seem to be drawing his attention. Alabama could be a team to watch as well.

The top-rated linebacker, Perkins is a playmaking presence off the edge. A prospect with a good frame and physical upside, he’s also tough to run from, with excellent sideline-to-sideline speed and range. He contributes as a running back in high school, where you see the quick feet he utilizes to slip blocks and the burst with which he exploits tackles off the edge as a pass-rusher. Perkins is an exciting player to watch, and you could argue he is just scratching the surface of the player he can be, which should be unsettling for opposing offenses in the future.

The playmaking edge defender doesn’t seem to be rushing any commitment, and highly sought after, he will have options, but this could turn into an in-state battle between Texas and Texas A&M.

Alexander switches from OLB to DE in the position rankings, and he has been a player utilized in different ways for his high school’s front seven, which is very attractive. Wherever the scheme-versatile prospect is aligned, he can create problems. Alexander is a disruptive presence off the edge as a pass-rusher, with an explosive first step and improved hand usage. He can win with speed but also has the ability to win with power. He has improved in taking on blocks and flashes excellent strength for shedding opponents.

An early Alabama commit, Alexander reopened his recruitment last fall. The five-star front-seven defender has plenty of options, with Alabama still a team to watch along with Georgia. Clemson and USC are two teams outside the SEC that also appear to be in the mix at this stage.

From unranked to top prospects

Robinson has the near-perfect running back build at 5-foot-10, 220 pounds. His running style is full of compact power, and he has the ability to run through defenders, but he can also make moves in space with quick feet. He shows patience and burst to the second level with the ability to jump cut, skip cut and get skinny. Robinson also possesses power and speed in the open field, with the ability to accelerate past angles. Georgia, Clemson, Alabama, Mississippi State, Ole Miss and LSU are among the favorites heading into the summer.

The Penn State verbal turned in an impressive junior campaign. His ability to move in the pocket to create windows and make plays under duress is among the best in the 2022 class. The 6-foot-5 strong-armed quarterback can change release angles and make accurate passes without setting his feet. Penn State is getting a true pocket-passing playmaker.

The Show Me State defensive line prospect made a big jump from sophomore to junior season, both in terms of play and physical development, while keeping his initial quickness. He plays defensive end in high school but projects to tackle or a 4i in a three-man front. Gracial possesses natural strength and pop on initial contact. The 6-foot-4, 290-pound Gracial has offers from Oregon, Missouri, Alabama, Iowa State, Michigan and Arizona State, among others.

Bledsoe went from not having a HUDL profile at the beginning of the 2020 season to becoming one of the most coveted defensive tackle prospects in less than four months. The 6-foot-4, 270-pound small-school budding star can hang on the rim on the hardwood and possesses a quick first step for his size — and he has yet to begin scratching the surface physically. Texas A&M, Texas, Alabama and Oklahoma are in serious contention.

The 6-foot-7, 310-pound Goodwin has become one of the more highly coveted offensive tackles in the class since the beginning of the 2020 season. He has elite ability to fire off the ball low at his height. In pass protection, Goodwin flashes very good body quickness and foot quickness to react to sudden change of direction. Ohio State, Kentucky, Alabama and Clemson are among the leaders to land the high-ceiling prospect.