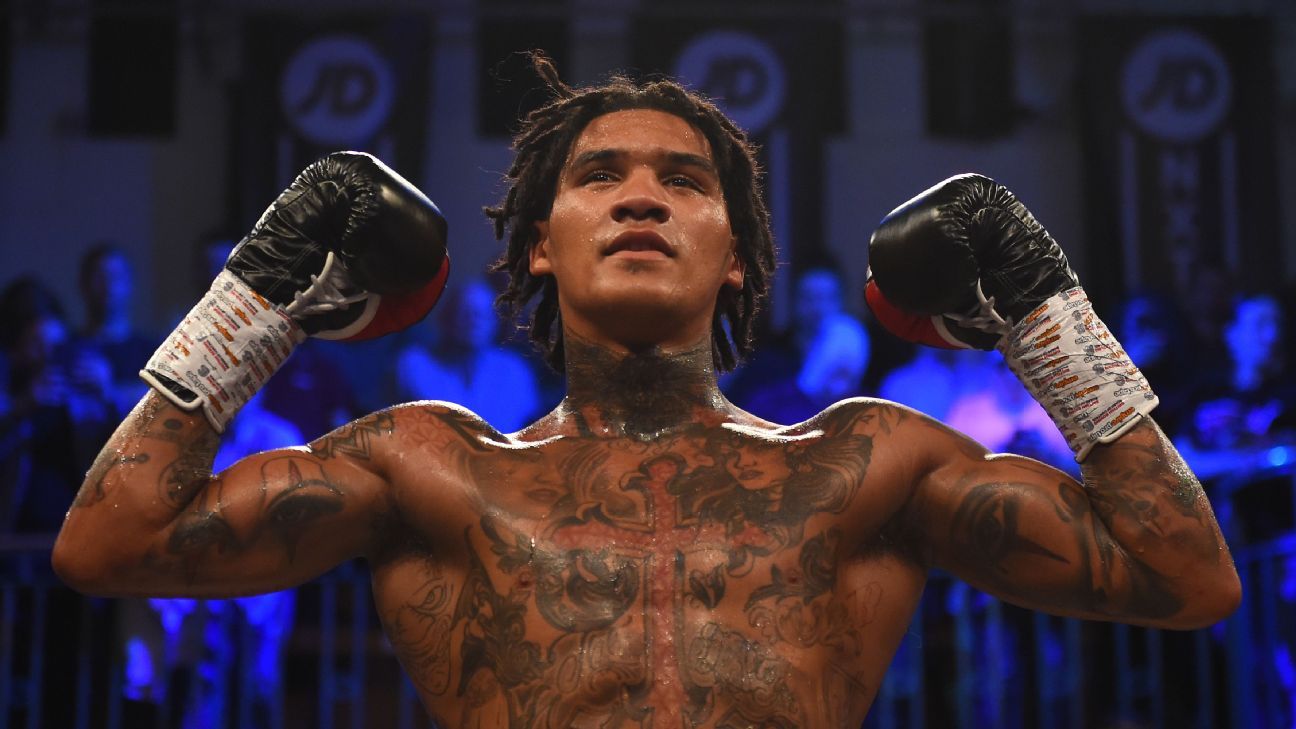 As the son of a famous boxer, Conor Benn has dealt with high expectations early in his career. Sometimes he wonders whether he should have left his idyllic lifestyle in Australia, but he is certain that now is the time to make a name for himself in boxing, and just the one world title will do.

The English welterweight is the son of Nigel — who competed in world middleweight and super-middleweight in the 1990s — and he has assembled a record of 17 straight wins and is exciting to watch, just like his dad was.

“If I am honest, if I could go back now, I probably would have stayed in Australia cooking on the barbecue with my dad, enjoying life and not having to worry,” he told ESPN. “I do sometimes think I am mad for not choosing that life. I think it would be nice but I don’t [do it] because the ambition, the drive, the challenge is so much stronger and exciting to me.”

Vargas (31-6-2, 14 KOs), 31, who floored Amir Khan before losing on points in 2018, will be a test for Benn despite the Colombia-born Canadian losing his last fight in a seventh-round knockout by Texas’ rising star Vergil Ortiz Jr. in July last year.

“This is to see where we’re at, he’s been in with the best fighters of his generation, and he’s going to bring one of hell of a fight but I believe I’ve got all of the tools to put on a destructive performance,” Benn said ahead of Saturday’s fight.

“I’m a contender and I’m constantly proving that. There’s potentially a world title eliminator at the end of the year, there’s the European title, the Amir Khan and Kell Brook fights are the ones the public want.”

– This is 40 … plus: Ranking the returns of boxing’s old guard
– How does Timothy Bradley Jr. beat Maxim Vlasov?

The increased attention is not new to Benn, who turned professional five years ago under the spotlight as his dad Nigel is one of the most popular boxers in British history. Nigel (42-5-1, 35 KOs), 57, was involved in some thrilling fights against the likes of Chris Eubank and Gerald McClellan, the latter unfortunately ended with America’s McClellan suffering life-changing head injuries.

Nigel also fought in the U.S., with stoppage wins over Doug DeWitt and Iran Barkley before retiring after two back-to-back defeats to Steve Collins in 1996, the same year Conor was born.

Conor says he has had deal with not only expectation of living up to his dad’s achievements, but also online abuse.

“It was a massive challenge at first,” Benn said. “It was hard because I was young and tough at first, but you get used to it. You’re growing year in year out and you are learning about life. You learn about people, characters, you learn the good about people and the bad about people, hidden agendas.

“Not everyone is going to like me or understand me. That’s fine but it doesn’t make it any easier to deal with criticism, and hate, and spitefulness, and vileness coming at you almost every day when really I’m a nice kid.

“But the critics really can drain away at your love for the sport, it can make you not enjoy boxing, not because of the fighting. That’s what I felt for a while, why am I here?

“My dad never wanted me to fight. I don’t feel like I had to take this path whatsoever. That’s definitely not the reason why I do it, I just love to fight and I’m not letting anyone take that away from me.”

Benn, who grew up in Spain and Australia but is now based in Essex, England, is an honest, plain-speaking 24-year-old who has recently become a dad.

Rather than declare he is seeking to conquer the world scene like most boxers do, Benn says he would happy to win a world title just once, then retire.

“I’ve just got to win a world title once, just once, then I’ll be a very happy man,” he added.

Benn has also given Campbell Hatton, the son of former welterweight and junior welterweight champion Ricky, some advice after the 20-year-old recently made his professional boxing debut.

“Anyone walking in similar shoes to me, I am more than willing to give advice to,” Benn said.

“Some of the stuff I see makes me sick to the core. There is such vile stuff on Twitter from real scumbags and it gets my back up. I remember how I felt when I was getting the same treatment so for him [Campbell Hatton] to get it now, it upsets me.”