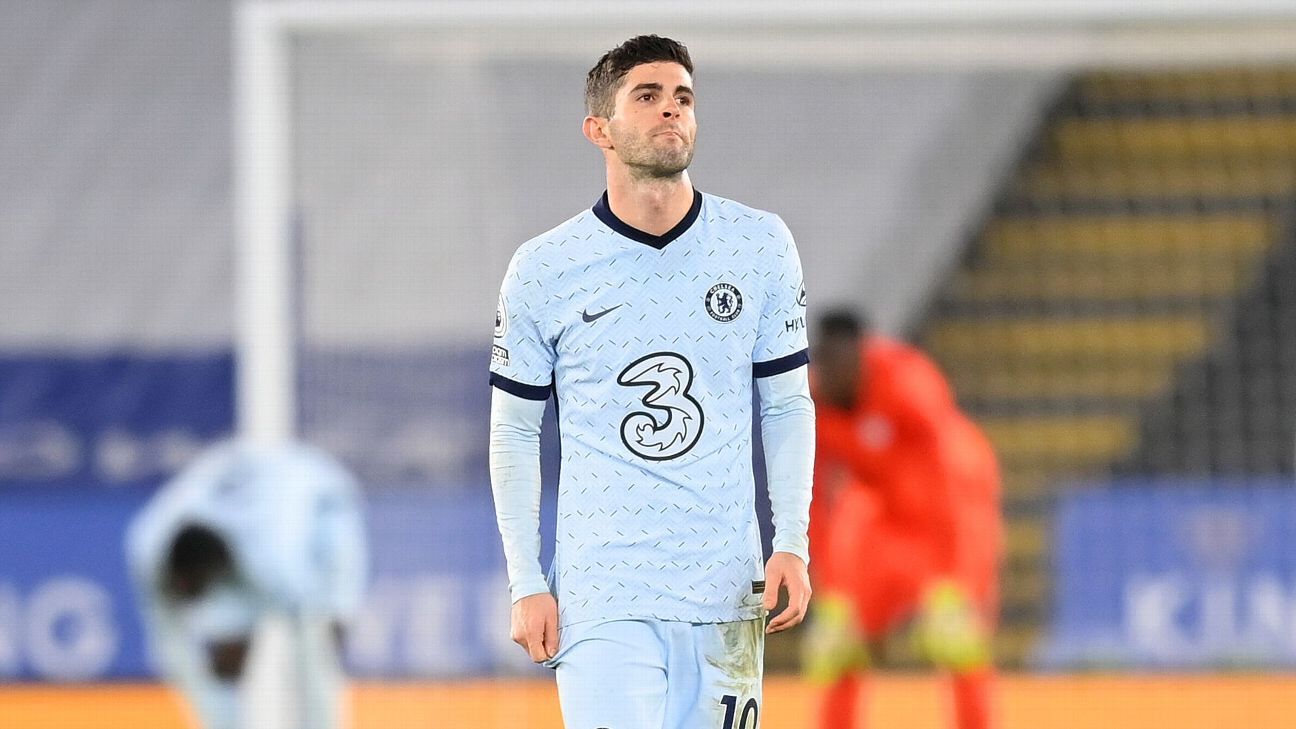 Christian Pulisic‘s debut season with Chelsea went about as well as could reasonably be expected. Following his 58 million move in Jan. 2019, the United States winger racked up nine goals and six assists in the Premier League, emerging as one of Frank Lampard’s leading lights when league play resumed after a coronavirus-enforced, helping the Blues secure a top-four place and reach the FA Cup final.

A lot has changed at Stamford Bridge, though, in the eight-plus months since Pulisic scored in that 2-1 cup final defeat to Arsenal. Lampard is gone, sacked in January for failing to deliver immediate results following a £220m transfer outlay, Thomas Tuchel has taken over as manager and Pulisic is often languishing on the bench.

The 22-year-old, who previously played under Tuchel with Borussia Dortmund in 2016-17, has started just four of 15 games since the German boss arrived, playing just 426 of a possible 1,350 minutes. With Chelsea having amassed a record of 10 wins, four draws and one defeat under Tuchel, and new signings Timo Werner, Hakim Ziyech and Kai Havertz showing signs they are starting to come good, it feels as if we have suddenly reached a critical moment in Pulisic’s Chelsea career. Can he dig in, change his manager’s mind and earn back a starting spot with the Blues?

The next few months figure to go a long way in determining whether Pulisic has a long-term future in London, though if Pulisic is looking for a bit of inspiration at the moment, he might find some by looking at the career of one of the U.S. men’s national team’s all-time greats: Clint Dempsey.

ESPN highlights the biggest stories around United States stars plying their trade overseas, bringing inside information to their successes and struggles, sitting down with some of the national team’s top players, and scouting the next generation of Americans breaking through across Europe.

Probably the most accomplished American outfield player in terms of individual achievements in Europe, Dempsey found himself in similar situations to Pulisic’s at virtually every turn during his time in England with Fulham. In five-and-a-half seasons with the Cottagers, Dempsey had six different managers, and with each coaching change, the Texan was forced to start over.

“You have to build yourself up and not everybody can do that,” Dempsey told ESPN in 2011 when asked about the stress of having to prove himself time and time again. “And part of it is getting in the right situation and having a manager who believes in you. And part of it is trying to change their mind to believe in you and to give you a chance, and then make the most of it.”

Dempsey would wind up leading Fulham in Premier League goals in four of his five full seasons with the club, leaving in 2012 as their record scorer in the competition with 50 goals. Despite departing as a club legend, it is easy to forget that the American’s time in London was hardly all sunshine and roses.

After joining Fulham in 2007, Dempsey made just three substitute appearances and played 49 minutes in three months before Chris Coleman was sacked. Coleman’s successor, Lawrie Sanchez, also used Dempsey off the bench initially, before the Texan forced himself into a starting role by the fourth game of the 2007-08 season. Dempsey would later repeat the same pattern of starting the season on the bench only to finish as the club’s top scorer under Roy Hodgson (on more than one occasion) and Mark Hughes.

“It wasn’t Chris Coleman, it was Roy Hodgson, and not even so much Roy, it was more Mike Kelly, [the assistant] who just like was this old-school guy who just did not like all the flicks and s— and just wanted him to play, right,” said former U.S. goalkeeper Kasey Keller, who played with Dempsey at Fulham in 2007-08 and had a 16-year career in Europe . “And I’ve said on multiple interviews, that’s the one thing that impressed me more than anything with Clint: being able to change somebody’s mind.

What made Dempsey so special as a player was his relentless drive and the chip he carried with him all the way from his humble roots in Nacogdoches, Texas. That competitive fire burned intensely; former teammates recounted times where it would boil over in the form of him fighting teammates in practice or on one occasion, Dempsey punching out a locker room window after being dropped for a key Europa League game. Despite his numerous accomplishments, he seemed to have to fight for his respect at every turn, though that seemed to be just fine by him.

“I’d rather be someone that’s underrated than overrated,” he said in 2011. “It just pushes me to be more focused and more determined to prove the manager wrong. I go out there every day in training and show him that I want it more than everybody else. In life, you’re going to have things that are going to come up against you. You can either let it get to you or you can make something happen. I choose to try to change the situation and make it better, or keep hitting my head against that brick wall until something else happens. That’s all I know. That’s all I’m programmed for, to keep pushing and to try to make the most of my career and my life, to take care of my family.”

It’s this kind of drive and mentality that Pulisic needs to channel at this challenging moment in his own career. There is still plenty of time for him to make an impression under Tuchel and win back a starting role, but it won’t be easy, and Pulisic will need to really dig in to earn that respect.

“I would basically just say that I think for him right now, it’s a little early to hit the panic station,” Keller told ESPN. “I wasn’t necessarily thrilled with what Tuchel had to say, by basically saying, ‘Oh, I just see him as a great substitute.’ No one wants to hear that.

“But I think Christian’s problem is that it’s just been too stop/start injury-wise. So he has to give himself a stretch to prove himself, prove his fitness, prove that he’s reliable, that you know you can count on him.”

Keller brings up a good point regarding Pulisic’s health, as the American has suffered nine different injuries since joining the London-based club last season, missing 28 games in all. Avoiding the nagging muscle injuries that have plagued him early in his career would only help him in his quest to win over his newest manager.

The good news for Pulisic is that as a big-money signing, and as an American in Europe, he had to prove himself in a similar fashion last season to win over Lampard who, according to former USMNT player and current FC Salzburg boss Jesse Marsch, was not initially sure of what he had in Pulisic.

“Even Frank Lampard, when I spoke to him in preseason a year ago now, I was talking to him about having Pulisic, and he was kind of like: ‘Yeah, he’s got a lot to learn, so we’ll see how he does.’ I said to him: ‘Listen, he was at Dortmund, and they had a high level of tactical thinking, of playing, and he was very successful.”

Pulisic eventually did win over Lampard, but now he must reset and do the same again with Tuchel. Like Dempsey did so many times before him, it is time to dig in and as Dempsey would say, “make things shake.” — Gus Elvin

A few minutes with Daryl Dike

It’s been a meteoric, and somewhat surprising rise for Daryl Dike. The 20-year-old forward completed his first season as a professional in at the end of November, netting eight goals in 17 appearances for Orlando City SC. Barely two months later, he was off to Barnsley for a loan spell in the English Championship, where he’s risen to international prominence off the back of seven goals in 13 league appearances — including a brace in Monday’s 2-1 win over Luton Town.

So, amid reported interest from some of the biggest teams in the Premier League, Dike sat down for a Zoom conversation with ESPN’s Jeff Carlisle.

: Finding himself in a logjam in central midfield with Bayern Munich‘s reserves, the 19-year-old moved on loan to the Austrian Bundesliga, where he’s registered two goals and two assists in six appearances for St. Polten. Coach Robert Ibertsberger raved to ESPN’s Stephan Uersfeld about Booth’s technical ability and understanding of the game, making him an important player in the St. Polten setup, and those at Bayern expect his good form to continue.

: De la Torre left Fulham for Heracles last summer as a wide attacking player who perhaps could operate as a No. 10. But ever since a tight 3-2 Dutch Cup defeat at Feyenoord, the 22-year-old has operated as a No. 6 in a double-pivot midfield, and according to ESPN Netherlands‘ Raoul Reink, that positional change has coincided with the club’s change in fortunes. No longer are Heracles in a relegation fight, but are now challenging for a Europa Conference League playoff place.

: After bursting onto the scene with five goals in three games for Schalke in January, young Matthew Hoppe has seen the goals dry up since — no goals in his last nine appearances. Sources at Schalke have told ESPN’s Stephan Uersfeld that they expected the 20-year-old to come back down to earth a bit, and that his recent barren run is also partially due to a lack of service. While there have been rumours swirling of Hoppe leaving the relegation-doomed club, Schalke tell ESPN they are relaxed regarding Hoppe’s future and believe learning under club legend Klaas-Jan Huntelaar will be good for his career and development in the long run.

In Brenden Aaronson‘s eight starts and three substitute appearances in the Austrian Bundesliga since his move to FC Salzburg in January, the side have lost just once. The potential burden of arriving in a new league in the middle of the season, and without the comfort of a preseason, doesn’t seem to have bothered him one bit, as he’s making remarkable progress for a 20-year-old. The attacking midfielder, who’s looking sharp and already making a telling contribution, seems on the verge of turning from a very promising talent into a dependable — or even indispensable — first-team player for his new club.

Aaronson, who has four caps for the United States to date, arrived in Austria from the Philadelphia Union, where he was usually deployed in a free central attacking midfielder role. At Salzburg, he has mainly slotted in on the left-hand side of midfield (with the occasional cameo on the right), though his roaming, energetic and enthusiastic style still allows him the liberty of swapping positions and cutting infield to look for the ball.

The American has a keen ability to find excellent positions inside the box and his two league goals for the Austrian club have been textbook — and trademark –finishes from inside the penalty area. He has also impressed with his off-the-ball running — often pulling away at the right moment to allow a teammate to release a perfectly executed pass — his high-energy pressing game and his willingness to attempt to take on opponents in wide positions — Tor-Kristian Karlsen