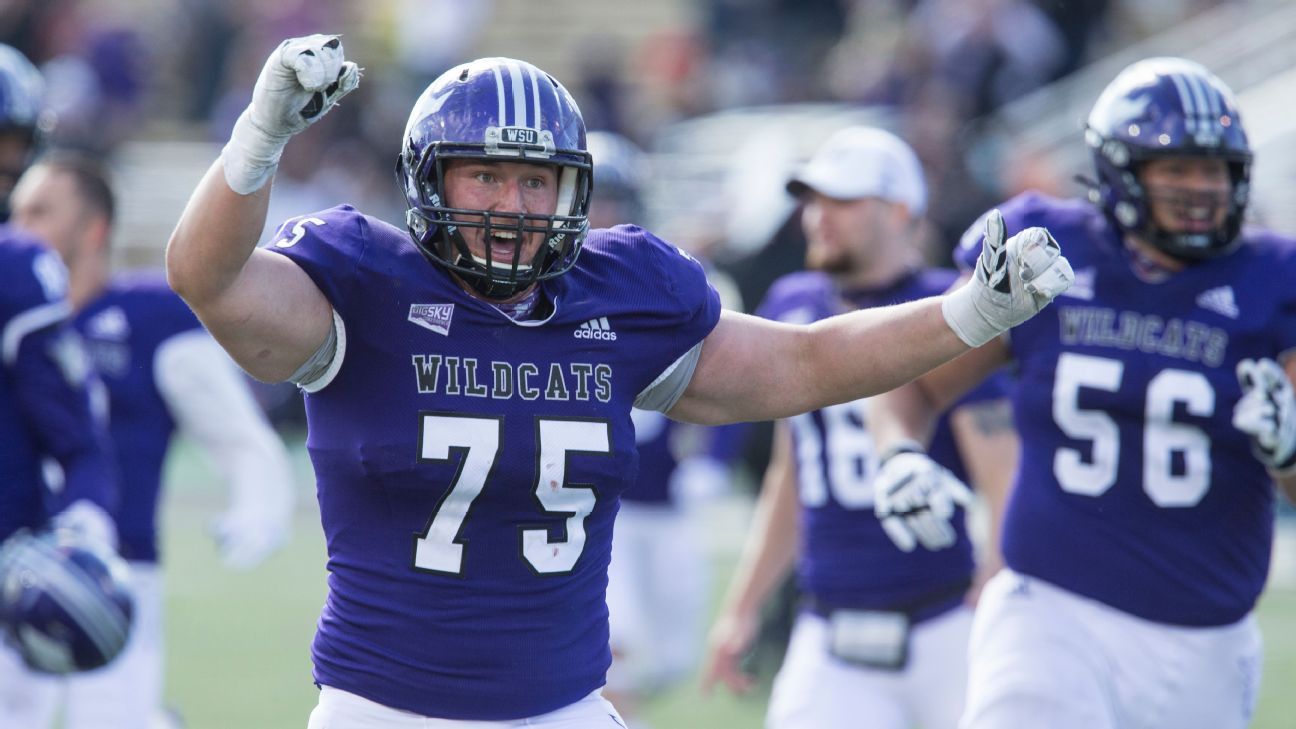 The seventh full week of the spring football season wasn’t the most stirring. We still saw our share of thrillers — ETSU and Austin Peay ended VMI’s and Murray State’s unbeaten runs, respectively. The Citadel came back to upset Wofford and Weber State pulled off its weekly survive-by-the-skin-of-your-teeth routine, etc. Of 28 games played, 14 were still decided by one score. Hard to complain about that.

With postponements and opt-outs associated with coronavirus testing adding up and with so many top teams watching from the sidelines, a sense of foreboding fills the air. Are we going to make it to the finish line and through a four-week, 16-team playoff, with all the right teams seeing the field?

We’ll find out starting in a couple more weeks. But for now, another full-ish slate awaits and lots of playoff spots remain up for grabs.

Note: Rankings listed below are the STATS FCS top 25 found at NCAA.com, all lines are via Caesars by William Hill, and all times are Eastern.

For a moment, let’s ignore potential no-contests and issues that could arise from positive covid tests for playoff teams moving forward. Focusing only on the games we’ve seen so far — in which almost no top team has been consistently dominant — and the fact that 10 of 16 playoff bids will go to conference champions, leaving few at-large bids, it’s easy to see the impending playoffs as a true anything-could-happen battle royale.

That makes every spot in the field precious. Let’s look at how each conference race is shaping up.

Big Sky: Following No. 9 Eastern Washington’s 32-22 win over No. 13 UC Davis, both EWU and No. 3 Weber State remain well-positioned to make the field no matter who wins the conference. Despite having yet to look even slightly dominant, WSU tops the standings at 4-0, while EWU stands at 4-1. EWU hosts Idaho on Saturday (the Vandals upset the Eagles in Moscow in February), while WSU hosts Idaho State, which gave the Wildcats their only easy win of the year a few weeks ago.

Big South: Granted, the seven teams in the Big South have combined to play four conference games, but, with due respect to the others, the two most important teams have played and won two each. No. 7 Kennesaw State and No. 20 Monmouth kick off against each other in West Long Branch on Saturday. The winner’s in the field; if KSU loses, the Owls are pretty well-positioned for an at-large bid.

Colonial: A load of postponements have made things messy. Delaware is 3-0 in the makeshift North division, while Richmond (3-0) and top-ranked James Madison (2-0) are unbeaten in the South. There is no title game, and JMU’s game with Elon is off. The Dukes are obviously in regardless, but the automatic bid is still up for grabs. Delaware plays a non-conference game against rival Delaware State on Saturday, then travels to No. 11 Villanova next week. Richmond heads to William and Mary. JMU could still try to schedule a game for next Saturday. We could end up with a single unbeaten champ, and it could come down to a vote.

Missouri Valley: Hey, speaking of messy, we’ve got a four-way tie at 4-1 atop the MVFC, and after none of the four teams played last week, only two take the field this week: No. 2 North Dakota State against 3-3 (but still 24th-ranked) Northern Iowa and Missouri State against Youngstown State. Bobby Petrino’s MSU is suddenly 15th in the polls; the Bears are only 4-4 overall, but after an 0-3 fall they’ve lost only to NDSU in the spring. Next week, by the way, is NDSU-SDSU, a pre-playoff playoff-caliber game.

Northeast: After 10 conference games, two teams have stood out up north: 2-1 Sacred Heart and unbeaten preseason favorite Duquesne. The Dukes won a 30-27 decision between the two on March 7, and they’ll play again in Pittsburgh on Sunday in the NEC Championship. Winner’s in the field of 16.

Ohio Valley: This league has seen a ton of close games, primarily on Sundays, and we’ve lucked into a makeshift title game when No. 10 Jacksonville State visits No. 17 Murray State on Sunday afternoon. Both teams are 5-1, and with no games scheduled for next week, the winner’s in. (JSU could be in, win or lose.)

Patriot: The six participating teams have combined for just six conference games thus far, but we’ve already got our division champions: Holy Cross (whose Saturday game with Colgate was canceled) and Bucknell (who plays Fordham this weekend) will play next Saturday for all the Patriot marbles.

Pioneer: Davidson’s 31-25 win over San Diego last Saturday put the run-happy, 4-1 Wildcats (4-0 in Pioneer play) in the driver’s seat. They’re a game up on both USD and Valparaiso; they visit 2-3 Presbyterian this weekend before hosting 0-3 Stetson the next. (Valpo hosts USD next weekend as well.) If Davidson wins out, they’re in. Lose, and things could get messy.

Southern: ETSU’s late win over VMI last week means we’ve got three teams with one loss in conference play: No. 14 VMI (5-1), No. 21 ETSU (4-1) and finished-for-spring Chattanooga (3-1). VMI is off this week and is scheduled to host rival The Citadel next Saturday; ETSU heads to Macon to play Mercer on Saturday evening. ETSU owns the tiebreaker edge, obviously, but they’ve played a different number of games, and if both teams win out, VMI takes the SoCon title due to a better win percentage.

Southland: Oh, the beloved Southland, where all of FCS’ points are scored. Following Nicholls’ upset loss at McNeese State last weekend — a game that only featured 74 points and 1,103 total yards, a paltry combined figure by Nicholls’ standards — this race sets up pretty easily. After Saturday tuneups (SHSU hosts McNeese, while Incarnate Word hosts 0-5 Northwestern State), No. 5 Sam Houston plays at No. 19 UIW next Saturday, likely for the conference title. Things could get weird if both teams lose this weekend and UIW pulls an upset next Saturday, but SHSU has been one of the most consistently awesome teams in FCS, winning its four games by an average of 50-20. The odds of the Bearkats losing two in a row aren’t great.

If the best of the contenders wins out in each conference — which is perhaps unlikely with the way this spring has gone, but roll with it — here are the teams that would secure the 10 automatic bids:

That leaves these teams on the bubble for six available spots:

Four of these 13 teams are from the MVFC, three from the CAA. With a few more big games on tap, some of this mess will sort itself out, but it goes without saying that lots of teams still carry playoff ambitions into the weekend with Selection Sunday just nine days away.

Here’s a tasting menu of what to watch to get the most out of your FCS weekend.

Saturday afternoon: Lehigh at Lafayette (12:30 p.m., ESPN+). Not the most thrilling game in the history of this storied rivalry — neither team is in conference contention, and Lehigh’s scored just three points in two games — but great rivalries are great rivalries.

Saturday afternoon: No. 7 Kennesaw State at No. 20 Monmouth (1:00 p.m., ESPN+). A battle in the trenches: Monmouth averages 44 rushes per game, KSU 59. Whoever better establishes itself — probably KSU — takes the Big South.

Saturday afternoon: Central Washington at Montana (1:00 p.m., GoGriz.com). A preseason top-10 team, Montana opted out of the spring season but still scheduled a couple of spring contests to kick off some rust.

Saturday afternoon: Youngstown State at No. 15 Missouri State (3:00 p.m., ESPN+). Wins over ranked South Dakota and UNI teams have given MSU a decent résumé, but with next week’s game with Illinois State already off, the Bears might need to run up the score against the Penguins to feel good about an at-large bid.

Saturday afternoon: Alabama A&M at Jackson State (3:00 p.m., ESPN). No full “Coach Prime Watch” section in this week’s piece, but after two straight losses, Deion Sanders’ JSU Tigers get more ESPN time this weekend and are still alive in the SWAC East race. A win over 1-0 Alabama A&M, which has had games postponed or canceled for three straight weeks, would get them back on the right track.

Saturday afternoon: No. 23 Southeastern Louisiana at No. 18 Nicholls (4:00 p.m., ESPN+). Wins over Nicholls and SIU could give SELA a decent playoff case. One thing’s for certain in this one: there will be points.

Saturday evening: No. 2 NDSU at No. 24 Northern Iowa (5:00 p.m., ESPN+). UNI specializes in defense, NDSU in Big, Burly Manball. This one’s going to be ridiculously physical.

Saturday evening: McNeese State at No. 5 Sam Houston (5:00 p.m., ESPN+). SHSU’s been maybe the most consistently awesome, and prolific, team in the country this spring. The Kats are a must-watch.

Saturday evening: No. 21 ETSU at Mercer (6:00 p.m., ESPN+). ETSU is must-watch as well, and for a different reason: every game the Bucs play is close. They’ve now played 10 straight FCS games decided by a touchdown or less. Ten!

Saturday evening: No. 8 Delaware at Delaware State (6:00 p.m., ESPN2). Hens and Hornets. We’re getting some rivalry games under the wire!

Sunday afternoon: Sacred Heart at No. 25 Duquesne (Sunday, 2:00 p.m., ESPN3). The host Dukes are three-point favorites because of a stingy, strong-tackling defense and receiver Cyrus Holder, who averages 24 yards per catch over about four catches per game.

Sunday afternoon: No. 10 Jacksonville State at No. 17 Murray State (Sunday, 3:00 p.m., ESPN+). Your FCS weekend ends with a JSU team that found its offense last week and a Murray State team looking for a quick bounce back.