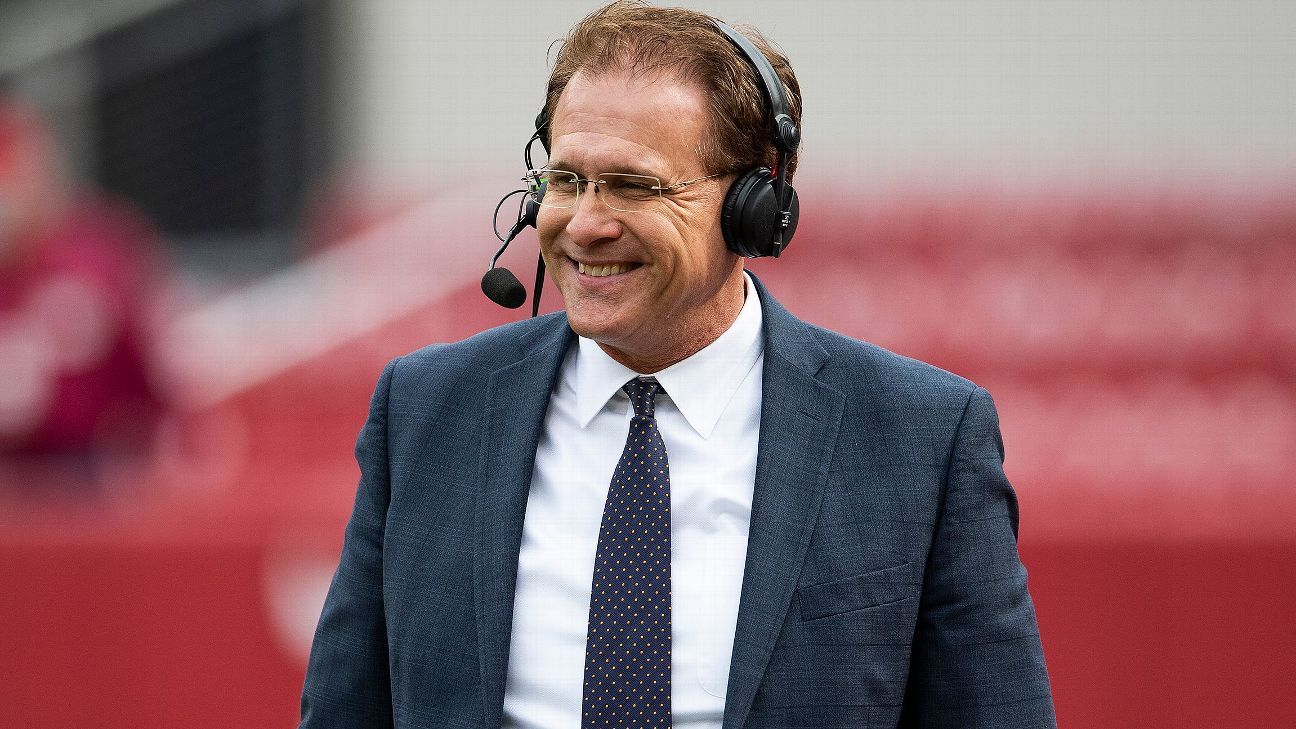 ORLANDO, Fla. — The billboards started popping up across Florida one month after Gus Malzahn arrived at UCF. His picture is on them, mid fist-pump, along with a big UCF logo and this message:

“The future of college football is in Orlando.”

The campaign extends into Georgia, too, a not-so-subtle blitz intended to drive home one overriding point: UCF football, a program unafraid to make bold and brash proclamations, now has a new coach to match the messaging.

No one ever mistook Gus Malzahn for Steve Spurrier — except for maybe the visor — so the quick shift from a coach reluctant to say much at all given the circumstances at his old job at Auburn to one with much more to say at his new one is a little jarring at first.

But Malzahn explains why the fit at UCF is perfect, allowing him to loosen up a little bit more and, in turn, come up with the idea for plastering 31 billboards across two states.

Pressed to explain what he means when he says he can be himself, Malzahn sits quietly, contemplating whether he should go there. “There,” of course, is back to Auburn, where Malzahn spent eight seasons before getting paid $21.7 million to leave this past December after the Tigers finished the regular season 6-4. Malzahn never had a losing record as Auburn head coach, but it is not hyperbole to say he suffered through more speculation about his job security than any coach in the country over the past three years.

Malzahn chooses not to get into what happened with the Tigers, repeating the reason he can be himself at UCF is the fit.

“That’s probably the best way to put it,” he said, without elaborating further.

But those who know him best saw the mental toll it took on him and everyone inside the program, as the questions about his future never seemed to stop until the day he was let go.

“The job can be smothering, and there’s a lot of external factors that people don’t realize,” said former Auburn coach Gene Chizik, who hired Malzahn as his offensive coordinator with the Tigers from 2009 to 2011. “You’re two hours and some change away from the best college football coach in the history of the game. When that happens at your No. 1 rival, the job you have to do every day against that, it can wear on you. Sometimes you can’t be yourself. You’d like to be, but factors make you very hesitant to do that, so I think you’re seeing a guy who can breathe easier. I think he feels it’s a new lease on life, and he’s all-in.”

Malzahn was content to sit out the 2021 season, do some television work and then find another job in 2022. It turns out, Tennessee inadvertently brought him back into coaching much earlier than he expected. In mid-January, the school fired coach Jeremy Pruitt and athletic director Phillip Fulmer stepped down in the wake of a recruiting scandal that is under investigation. UCF athletic director Danny White left to take the same job at Tennessee and, a week later, hired UCF football coach Josh Heupel to join him. Back at UCF, the Knights turned to Arkansas State athletic director Terry Mohajir to replace White. One of the first coaches he called to gauge interest was to Malzahn.

The two briefly worked together at Arkansas State, where Malzahn was head coach in 2012 before leaving to replace Chizik. Though their time together was short, Mohajir and Malzahn had a good working relationship. Mohajir believed UCF needed a coach with an offensive background like Malzahn and someone with a national name who could instantly elevate the football program further than it already had over the preceding four seasons.

“I had that conversation, ‘You’re a high-profile coach — are you ready to get back in?'” Mohajir recalls. “He said, ‘I’m jumping off the walls.’ Not everybody would be ready, but he was, and I wanted to make sure he was ready. He feels this is a pure opportunity. He doesn’t have to deal with a lot of other ancillary land mines here. Nobody’s telling him what he has to do.”

As soon as Malzahn arrived, he made it clear he wanted to be involved in the marketing, messaging and promotion of the program. He came up with the billboard idea, while UCF put together a video to go with the campaign and posted it on social media. Malzahn has been much more active on Twitter himself, part of a strategic plan to be the face of a program he believes has not yet reached its potential.

“If you’re going to dream, you’ve got to put yourself out there,” Malzahn said. “The hard part is doing it.”

Putting oneself out there is much easier at a place like UCF, which is not shy about getting loud in search of a little respect. Malzahn might know that better than anyone. The school self-declared itself national champion after beating Malzahn and Auburn in the Chick-Fil-A Peach Bowl to finish undefeated for the 2017 season. White drove the messaging, understanding it brought national attention to a commuter school in Central Florida that played in the shadow of larger in-state programs Florida State, Florida and Miami.

Though White is now gone, UCF still wants the same seat at the Power 5 table. “The future of college football is in Orlando” is meant not only to remind recruits that UCF has already laid the foundation — and outpaced schools such as Florida State and Miami in recent years — but it can elevate the program even higher. Who better to lead the charge than a school whose motto is, quite literally, “Charge On!”?

“We have a chance to be the future, and we’re a program that’s going up,” Malzahn said. “I’m blessed to come in here at the right time. Everything’s starting to line up, and I think everybody feels it. We’ve just got to do it now, but the exciting thing is it’s capable of being done.”

To do it, Malzahn has to quell the criticism that followed him in his later years at Auburn: that he simply had lost his fastball on offense. Malzahn wrote the book on the hurry-up no-huddle, but he could never quite seem to match what he and the Tigers accomplished early on in his tenure and when he was offensive coordinator under Chizik — helping direct a Cam Newton-led offense to a national championship in 2010. Auburn nearly won another championship in Malzahn’s first year as head coach in 2013, falling just short in the BCS national championship game against Florida State.

But it became increasingly difficult to manage being the head coach and primary playcaller, so Malzahn gave up playcalling duties at various points, before taking them back again multiple times. Last year, he hired good friend Chad Morris as offensive coordinator and had him call plays, hoping it would help. But the same issues plagued Auburn, and offenses like the one Heupel directed at UCF had simply passed them by. In 2020, UCF ranked No. 2 in the nation in total offense; Auburn was No. 77.

One of Malzahn’s first decisions at UCF: He will call the plays.

“He’s in his comfort zone when he’s doing that, and when you don’t have the control of that, it’s not a good feeling,” Chizik told ESPN. “He’s extremely detailed. He’s extremely precise. He’s one of the best at setting up plays for the next play, and when other guys don’t do that quite as well, it’s frustrating. I don’t think he’s had anybody under him as an OC who can do that better than him, so taking the reins of the offense is going to put him in a better head space, as well.”

Malzahn will not have any built-in excuses for the upcoming season, not with a ready-made superstar waiting in quarterback Dillon Gabriel. Headed into his junior season, Gabriel has established himself as one of the best quarterbacks in the country, already throwing for 7,223 yards in two seasons with 61 touchdowns to just 11 interceptions.

It is why Year One is so critical, for UCF and Malzahn. Both coach and program must find themselves again to make their partnership work. UCF is coming off a disappointing 6-4 season, ceding its mantle as the best Group of 5 school to fellow AAC conference member Cincinnati. It was an unusual spot to be in after back-to-back New Year’s Six bowl appearances in 2017 and 2018. But to get back there, Malzahn has to find his offensive groove again.

“I know we have the right people in this building to help us accomplish what we want to accomplish, which is winning a championship,” Gabriel said. “What I love about this university is they expect excellence. [An undefeated year is] what we strive for, that’s what we expect, those are the expectations and that’s something we want to make into a reality. Coach Gus knows what it takes. We told him our goals, and we made it very clear that championship is all we want.”

Because the College Football Playoff has yet to include a Group of 5 school, it’s more probable the only championship UCF has a chance to play for is its conference. As hard as White lobbied for inclusion, it never happened during UCF’s two undefeated regular seasons.

Malzahn and Mohajir maintain it is possible with the right nonconference scheduling. White maintained he wanted to schedule home-and-home series only to maximize home games at their campus stadium, turning off marquee Power 5 opponents UCF needs to boost its strength of schedule. Because schools were unwilling to accept those terms, it has left holes in future schedules Mohajir is now scrambling to fill.

Mohajir and Malzahn want to be more flexible in their approach, which means keeping the door open to play Florida, even if it means a one-off in Gainesville, something White did not want to do.

Scheduling those teams, or any potential top-25 program, is a tricky proposition for a program like UCF because the Knights would have far more to gain than their possible opponents. But even if the Knights are able to get multiple marquee nonconference games onto the schedule every year, getting into the top four would still remain remote possibility. Still, Malzahn cannot rule anything out and insists he wants to stay in Orlando to see those championship dreams realized.

That is all well and good today, but if UCF has a good year, his name is sure to come up for more high-profile jobs. UCF has been through it before, as his most recent predecessors, Heupel and Scott Frost, stayed a combined five seasons before moving on to Power 5 jobs. Malzahn has far bigger name recognition and a longer resume, with SEC experience at the very top.

“I’m at a different point in my life and career,” Malzahn said. “I’ve been at a big program, and we’ve won the whole thing, but there is a refreshing-ness of a place like this that has great potential. I always felt like if the right guy got here and would stay here and build it, they would be able to do it. The timing’s set up perfect for that, and that’s my plan.”

If that is the case, perhaps the future is already here.