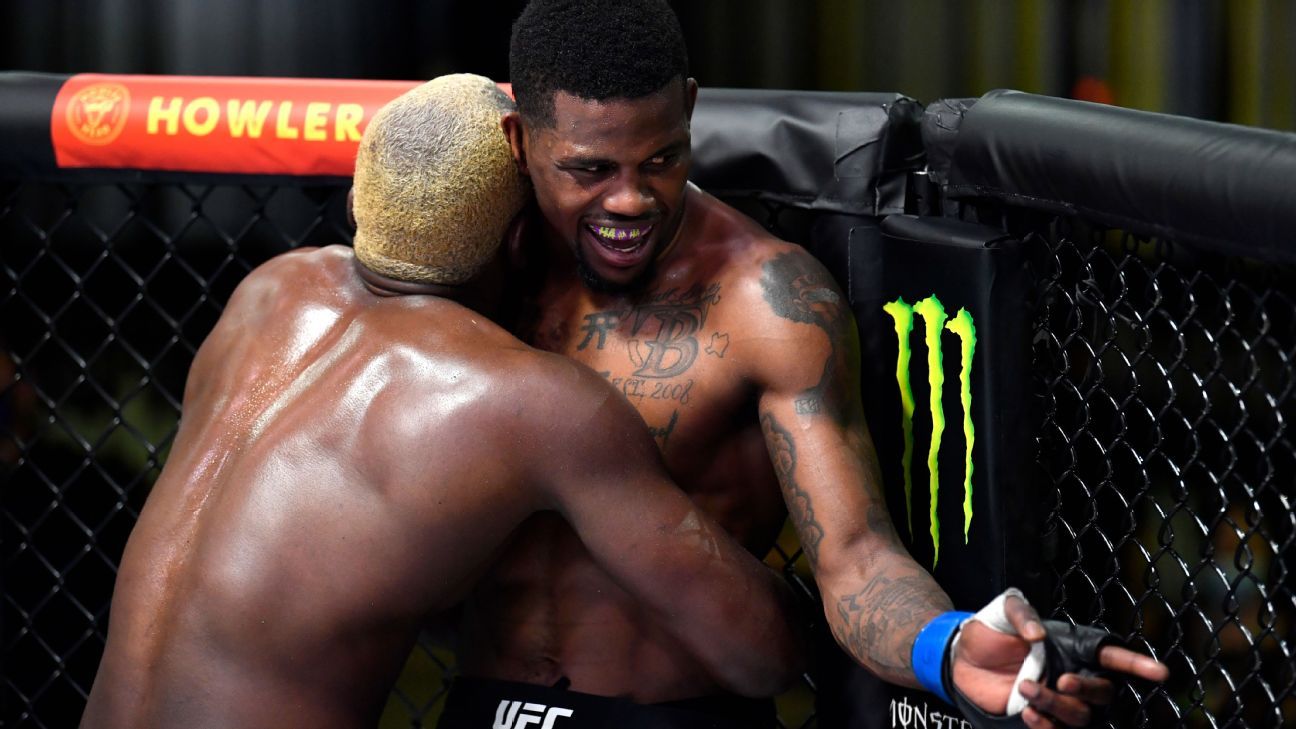 Lutter, who’s based in Fort Worth, Texas, and has been Holland’s head MMA coach for more than a decade, never had a problem with anything Holland said specifically — he just doesn’t believe an athlete should run his mouth during a fight. It’s not his style.

Eventually, however, Holland won him over. Or wore him down. Maybe both.

The UFC returns to ABC once again as Kevin Holland hopes to rebound from a loss just three weeks ago when he faces rising middleweight contender Marvin Vettori. Holland, who won five times in 2020, hopes to avoid going 0-2 to start 2021.

“Kevin has always talked, and it drove me crazy in the beginning,” Lutter told ESPN. “He’ll talk in a jiu-jitsu match. I’ll be on the other side of the gym during practice, and I’ll hear him talking. And I’m one of those guys who doesn’t necessarily love that, but that’s who Kevin is.

“And I’ve come to love it when he’s fighting. It f—s with his opponent, and it lets me know where his head is at. I don’t like it when he’s quiet now. I actually encourage him to talk.”

Therein lies the challenge with Holland (21-6), who faces Marvin Vettori (16-3-1) in Saturday’s Fight Night main event in Las Vegas. The 28-year-old Holland received a lot of criticism for his last performance three weeks ago, a five-round loss to Derek Brunson during which he never stopped talking, even as Brunson won four out of five rounds on every scorecard.

In the aftermath of the fight, Holland said there are things he’ll work on. But he also said that he’ll continue to be himself.

“Talking less would have been great, talking more would have been worse, right?” Brunson said on Ariel Helwani’s MMA Show. “Talking works when it works, and when it doesn’t, I’m the bad guy.

“That’s the hard part about being who I am and how I fight. It’s great when it’s great. And when it’s bad, oh my gosh, it’s the worst thing in the world. You can be the biggest idiot in the world or you can be a genius.”

As Holland’s longtime coach, Lutter has a unique perspective. On one hand, he does want Holland to talk. He has seen it have an effect on his opponents numerous times. In December, Holland knocked out Ronaldo “Jacare” Souza with a punch from his back, and he did it just moments after Souza smiled and responded to something Holland had said.

“Jacare paused to talk, and then got hit in the face and put to sleep,” Lutter said. “This is a fight, and he forgot to protect himself at all times. Kevin is trying to get these guys to slip, and it works.”

Even though talking proved to be effective against Souza, Lutter didn’t appreciate Holland conversing with retired UFC champion Khabib Nurmagomedov, who was sitting cageside with UFC president Dana White, between rounds during the Brunson fight. And he doesn’t dispute the notion Holland might have accepted defeat in the later rounds.

“I was very insulted when he talked to Khabib,” Lutter said. “‘Listen, I’m your coach. I’m standing right f—ing here. Why don’t you talk to me?’ He thinks what he’s doing is selling it, and it’s going to keep people watching, but he was disrespecting me. He didn’t mean it that way, but that’s what he was doing in that moment. That said, I failed as a coach to get him back on task.

“I also think he decided before the fifth round, ‘This isn’t my night. I can come back later and beat this guy later.’ He’d made up his mind that he was OK with it, and I do think he regrets that now.

“I remember being down in wrestling matches when I was younger and having a problem where I got an opportunity to win the match, but I almost didn’t feel worthy of it, because I’d lost three-quarters of the match. I think Kevin has that problem sometimes. He won’t get out of his own way.”

Less than 10 days after his loss to Brunson, Holland and his team were in communication with the UFC about stepping in for Darren Till, who suffered an injury and had to pull out as Vettori’s original opponent. It’s no secret Holland loves to be active. He set a UFC record in 2020 when he won five fights in just 210 days, and he’s tying a record for shortest time span between main events — just 21 days. This was a quick turnaround Lutter could really get behind.

“We could wait three or four months and then go out there, but we still wouldn’t have any answers to these questions you’re asking me, and even I’m asking myself,” Lutter said. “We’ve gotta go out there and find out, and Kevin wants to fight the big names. He wants to beat these guys. My attitude was, either way, we’re going to have to face this, why not do it now?”

When asked what it’s like to coach Holland, Lutter didn’t sugarcoat it. “Kevin is hard to teach,” he said. But at the moment, Lutter, as well as striking and strength and conditioning coach Wendell “Shug” Dorsey, believe they have what they didn’t have in the Octagon the last time Holland fought: a focused athlete.

Because as Holland has said many times himself, as much as any fighter hates a loss, he hates the feeling of letting down those who believe in him far more. And even after his last performance, there are plenty of people who still believe in Holland.

“Do I think Kevin’s max is at a very high level? I think a lot of us see that,” Lutter said. “I think there is a reason [Daniel Cormier] is messaging Kevin, saying, ‘Hey, come up and do some work, you could be the champ.’ He had guys like Dana White hitting him up, Jon Jones — saying, ‘Hey, you’re f—ing crazy talented and you’re pissing it down your leg.’ It’s not just me that’s telling him these things. Other people see he has a crazy talent. Now, he has to decide if he wants to put in the work.”