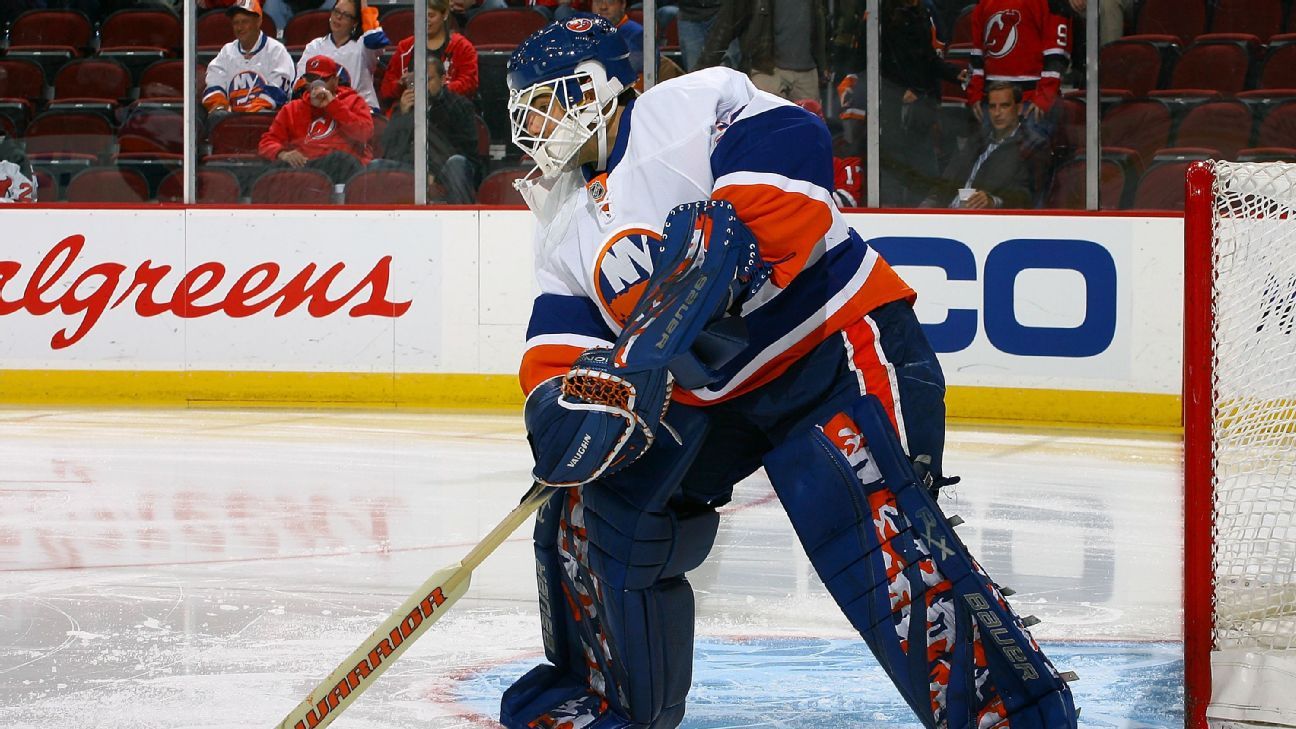 It has now been 10 years since an NHL goaltending legend last showed its unique face before disappearing from the scene for good. It was loved by some and criticized by others, but it will always bring a smile and shake of the head when remembered.

In the end, few pieces of equipment generate as much nostalgia as the once-great Cooper SK2000 goalie helmet and cat eye cage combo.

You might remember it as the “Chris Osgood helmet.” The three-time Stanley Cup champion was known for wearing the protective relic for his entire career, and when he last played an NHL game in January 2011, he was the final goaltender courageous enough to don one. But that legacy would last only two months before Rick DiPietro claimed that honor.

On Feb. 2 of that season, the New York Islanders were trailing the Pittsburgh Penguins late in the game when Pens forward Matt Cooke made contact with Islanders goalie DiPietro, initiating a skirmish in the corner. Within a few seconds, Penguins goalie Brent Johnson came the length of the ice and squared up himself with DiPietro.

The fight lasted one punch, with Johnson catching DiPietro square in the face and leaving him with facial fractures that ultimately held him out of action for more than two months. When DiPietro did return, he was forced to make a change to the Cooper helmet.

“It was the only alternative,” said DiPietro, now an ESPN radio host. “I tried to put the regular helmet on, and it was so pressed against my face that I just couldn’t do it. They were afraid that if I got hit in the face that it would mess up the surgery. So they said the only way we will let you play is if you can find something that doesn’t sit right on your face. It was a perfect alternative.”

But the No. 1 overall pick of the 2000 draft didn’t argue with the switch. In fact, he embraced it.

“I thought it was so cool. Maybe cause of Reggie — I used to love [former NHL goalie] Reggie Lemelin; maybe it’s because he wore it. I used to think it was such a good look.”

Joining DiPietro among the last known to wear the Cooper helmet were Osgood and Dan Cloutier, who actually pivoted to a regular mask after the Los Angeles Kings raised concerns about safety. But it hadn’t been too long before that that it was much more popular in the NHL.

One goalie who stuck with the SK2000 design through a 15-year career was Glenn Healy.

The helmet put pressure on the forehead as opposed to the sides of the head, which was a main reason for DiPietro’s switch. He says it was easier to see through, though it was certainly heavier than a normal mask, and would leave his chin exposed during scrums in the crease. Healy also raved about the visibility and comfort, but admitted that he traded plenty of stitches for those luxuries — at least 400 of them in his career.

“Every single shot that you would get would be a pressure cut, and you’d have to go in and get stitches.”

Healy remembered one slapshot at the end of a practice with the Toronto Maple Leafs that caught him between the eyes. He immediately started bleeding and was so mad that he’d now have make a trip to the hospital that he flung his stick into the crowdless stands.

Just getting the Cooper helmet was problematic. The hockey division of Cooper was acquired by Bauer in 1990, and the modern mask pushed the once-conventional helmet into obscurity. Finding parts also was incredibly difficult, and required some savvy outside-the-box thinking from equipment managers.

Where did Healy and Leafs trainer Scott McKay find his last helmet? “We got it on eBay from a beer league goalie.”

When it arrived, the foam inside the helmet had the former owner’s phone number on it in case it was ever lost.

DiPietro recalls a similar experience when he flipped to the Cooper helmet in March 2011. The Isles’ equipment trainer did a sweep of eBay before locating one in a familiar place: former Islander Osgood.

“I think it might have been Ozzie’s helmet,” DiPietro said. “I don’t know where we got it. We got it and painted it blue.”

According to InGoal Magazine, Osgood actually looked halfway around the world for a SK2000 shell. The late Sergei Tchekmarev, the Detroit Red Wings‘ team masseuse when Osgood returned to Detroit in 2005, remembered having a pair of them in his garage in Moscow and helped equipment manager Paul Boyer bring them to town.

DiPietro says the difficulty of outfitting the helmet and finding the right parts ultimately played a part in its disappearance, though the reasoning doesn’t end there. “I think it’s partially safety. The weight of it. You can’t find the Cooper helmet anymore,” he said. “Plus, how hard the guys shoot it and the shape of it. The whole design of the new mask is to kind of take the impact away from your head. And this generation probably didn’t grow up watching a lot of guys who wore that mask.”

“Yeah, I got a concussion — hit me right in the forehead, a 2-on-1 down the left wing at the [Nassau] Coliseum,” he said. “Hit me in the forehead and paint went flying everywhere. I tried to skate off the ice and went down. They said, ‘You can’t wear it, we don’t feel comfortable with you wearing the helmet anymore.’

“I would have worn it longer if it didn’t break. I actually liked it. But the second that thing broke, it was like there’s no way, we can’t. It’s too hard to find another one … let’s just be done with it.”

And with DiPietro switching back to a modern mask, the Cooper goalie helmet was gone from the NHL. No matter how many stitches resulted or how deep into online seller profiles managers were forced to go, it will always be looked upon fondly by those who wore it.

Today, the SK2000 helmets still pop up in men’s leagues all over, and you’ll still see versions of the helmet for sale on eBay. Plenty more are stored away in basements or garages across North America.

DiPietro still has the first one he ever owned, which he asked his parents to get him when he was first coming up and playing with the Illinois Selects. He wasn’t allowed to wear it in games because of league rules regarding cat eye cages, but he wanted to give it a try in practice.

“I just remember the first time I ever got to wear one was in like a father-son game for the Illinois Selects,” he said. “It was the coolest thing ever skating on the ice with the cat eye cage on.”

Healy still has some of his old helmets, too, and says he looks at the ones he wore with the Islanders early in his career in astonishment and wonders to himself: You actually wore these? What were you thinking?

But DiPietro isn’t quite ready to close the door on a return of the iconic headgear. “Maybe we should bring it back,” he said. “Listen, retro is in.”