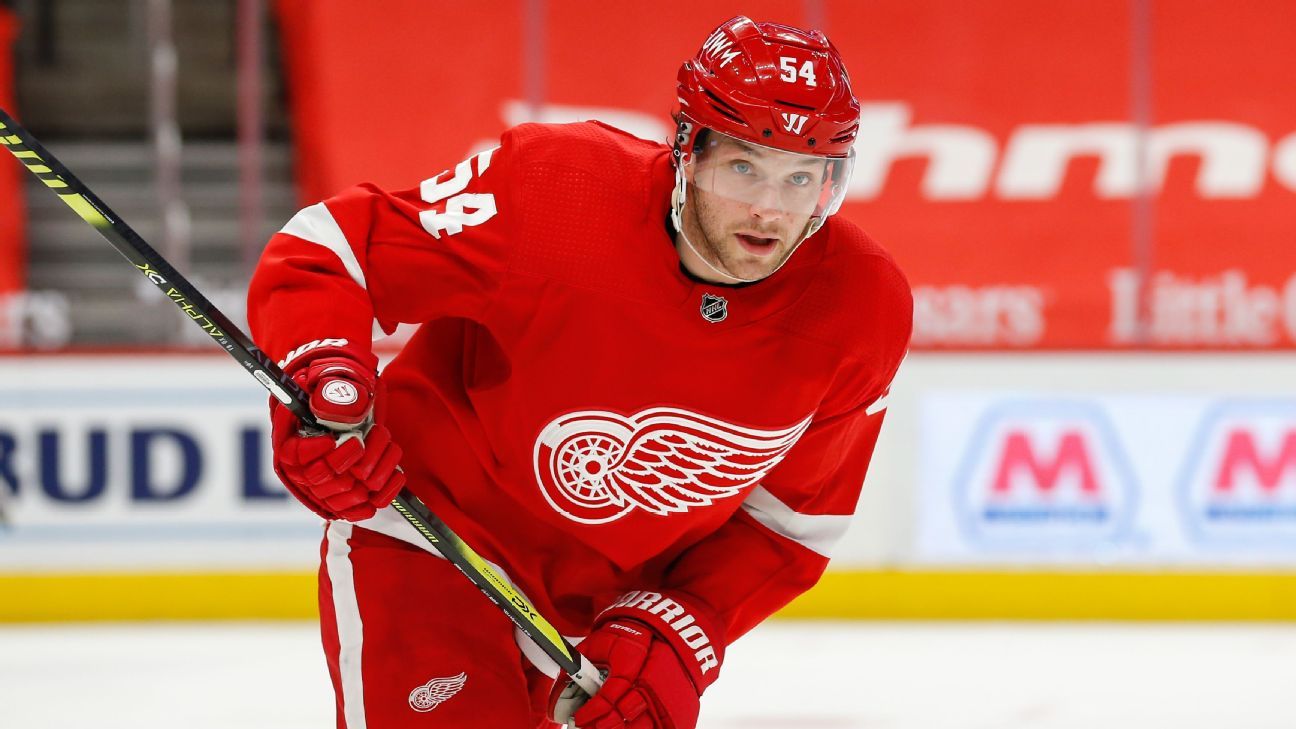 But there are many more mutually beneficial deals out there to be made as contenders look to bolster their rosters for a run at the Stanley Cup this summer, while rebuilding teams look to add prospects to their pipelines or draft picks to their caches.

Here are six trades we’d like to see before Monday’s deadline:

Sure, the Bruins could opt for defensive help, but their biggest need is getting more 5-on-5 scoring. Through 36 games, Boston has the fifth-worst 5-on-5 rate in goals per 60 minutes in the league, per Natural Stat Trick data (only the Sabres, Red Wings, Predators and Stars are worse).

Boston was thinking about Kyle Palmieri before he was traded to the Islanders, and the Bruins have done some recon on Taylor Hall. But after trading away first-round picks in 2018 and 2020, I don’t think they can afford to lose another one this season. That’s why Ryan, whose trade return won’t be as high, makes more sense. I think he’d fit in really well with the Bruins’ culture. He has cooled off considerably since scoring four goals in Detroit’s first three games, but add the 34-year-old in a lesser role, on a much more talented team, and — voila — you have the same effect you’re seeing with Blake Griffin on the Brooklyn Nets.

This deal only gets done if Ryan is healthy (he hasn’t played since March 28), so keep that in mind. — Kaplan

The Blues still seem like a team that could use a shock to the system, and acquiring Hall would provide one.

They’re 19th in goals per game (2.69) through 39 games. They could slide Hall on Ryan O’Reilly‘s wing or use him to energize a line anchored by Robert Thomas. Hall hasn’t gotten anything close to satisfactory results this season, but it hasn’t been for lack of effort; he has an expected goals percentage of 52.8% at 5-on-5. This would very much be a “hope a change of scenery sparks him” move, but I like the fit. I think he plays the kind of hockey the Blues look for in their forwards.

Trading Hoffman to the Sabres would clear $4 million from the St. Louis cap. If Buffalo retains 50% on Hall, the money works; and there’s no reason to expect the return for Hall to be anything less than that, considering the deal the Islanders just made for Kyle Palmieri from the Devils. Hoffman, a recent healthy scratch in St. Louis, has an expiring contract as well.

Assuming Hall waives his no-move clause for St. Louis, the only question left is whether the Blues feel this version of the team is worth the investment. General manager Doug Armstrong has been brutally honest in his deadline transactions — remember Paul Stastny getting traded to Winnipeg despite the Blues chasing a playoff spot? Will it be worth trading a first-rounder when they don’t have a second-rounder, just to get rolled by Colorado or Vegas in a seven-game series? Or, worse yet, to fall short of the fourth seed altogether? — Wyshynski

The Avalanche are the hottest team in the NHL right now. That includes goalie Philipp Grubauer; Grubauer is a top-three Vezina Trophy candidate for me right now (though it is the GMs who vote on that award).

However, Colorado is one Grubauer injury away from disaster. I’ve talked to players on the Avalanche about last year’s playoffs, and they firmly believe if they weren’t down to their third-string goalie in the second round series against the Dallas Stars, they would have advanced. Colorado got some insurance in net by trading for Jonas Johansson, but they need more insurance than that. The fact that Merzlikins is signed for 2021-22 as well makes this extra enticing for GM Joe Sakic.

The Avs’ other biggest need is defensive help, considering Erik Johnson has been injured. Savard fills in perfectly as a veteran on the right side. The Avs would be leaving themselves a bit bare with draft picks for 2021, but it’s worth it. They really have a shot to win it all this year.

Meanwhile, for Columbus, it’s time for some retooling. What GM Jarmo Kekalainen needs is more young scorers to insert into the lineup. Organizationally, goaltending is an area of strength, especially with Joonas Korpisalo manning the NHL crease, so it’s OK to part with Merzlikins. — Kaplan

I’ve got the same thought as Emily here, but a different player joining the Avs.

The Avalanche shouldn’t waste their time trying to find a veteran goalie as an insurance policy for Philipp Grubauer. Just go out and get the best goalie available. That’s Driedger, the netminder who has a .931 save percentage and a 2.05 goals-against average in 17 games this season. He has come into his own over the past two seasons, posting a .934 save percentage overall in 29 games with Florida. He’s 10th in goals saved above average (13) this season. He makes only $850,000, so he fits under the Avs’ current cap space.

Instead of a pick going back to the Panthers, how about a player? Timmins was drafted 32nd overall in 2017, but he has played only 19 games in the NHL over the past two seasons. He’s talented but injury-prone, and he’ll be a restricted free agent this offseason. The defensive depth chart in the Mile High City is a mile deep, so trading him for the best goalie available would be a savvy move for Sakic. — Wyshynski

The Panthers cleared up some cap space and money by trading Brett Connolly to the Chicago Blackhawks. Connolly was a player whose cap hit ($3.5 million) wasn’t matching his reduced role. So you get the sense that GM Bill Zito is preparing to do something else; the Panthers have been such a pleasant surprise thus far, it’s time to reward the group and go for it.

Florida sustained a major loss when Aaron Ekblad underwent leg surgery after an awkward in-game fall; he’s out for the season. Ekblad was having a Norris Trophy-caliber campaign, and there’s no replacing him, but a competitive veteran like Montour is a good place to start.

The Sabes are looking to move pretty much all of their pending unrestricted free agents. Though GM Kevyn Adams is asking for first-round picks in trade for some of his players, that might change the closer we get to the deadline. Landing a second-rounder for Montour, in this unusual year, might be the most that Adams can do at this point. — Kaplan

I’ve been saying for a while that Manson and the Ducks both need a change here. Assuming the Leafs aren’t on his 12-team no-trade list — or that he’d be willing to waive it entirely — adding the 29-year-old on the right side of the Toronto defense corps makes it a formidable unit.

Justin Holl can move down to the third pairing. Manson can partner with Jake Muzzin. Meanwhile, pending RFA Heinen is an energy forward with good underlying numbers.

Kerfoot, 26, gives the Ducks some stability, as he’s signed through 2023. His $3.5 million AAV would more than cover Manson’s cap number ($4.1 million) provided the Ducks retain some of the latter. Liljegren is only 21 and is under contract for next season as well. Obviously, the allure here are the two draft picks for a team still building up to contention.

The only wrinkle here is that Manson is signed through 2021-22, which means he might have to be exposed in the expansion draft this summer, unless the Leafs cut a side deal with the Seattle Kraken. They have to protect Muzzin and T.J. Brodie, who have no-move clauses, and would obviously do the same for Morgan Rielly. But if Manson helps them win the Stanley Cup, it’ll have been worth it. And there are remedies to that headache that hopefully don’t lead to what the Ducks did the last time Manson needed to be kept out of an expansion draft — which is how Shea Theodore ended up in Vegas. Yikes. — Wyshynski