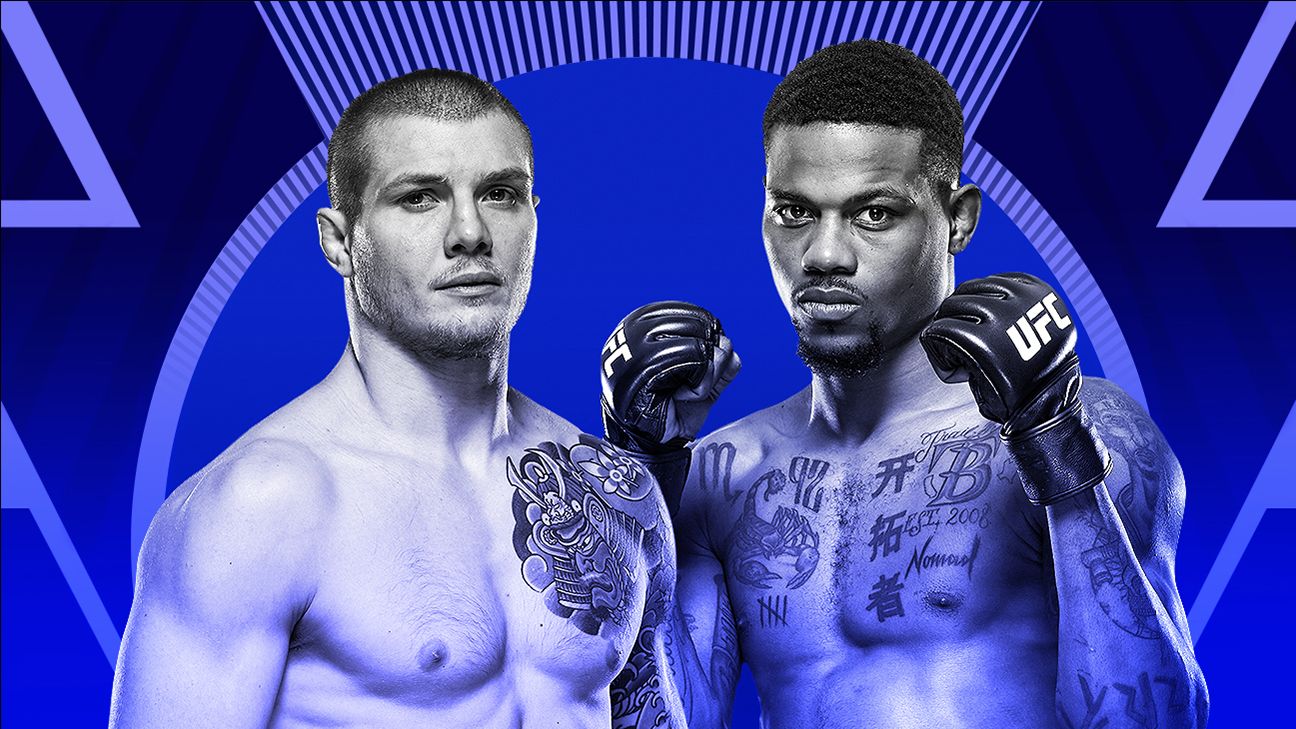 For UFC middleweight Marvin Vettori, the past year has been equal parts rewarding and frustrating.

Vettori (16-3-1) will face Kevin Holland (21-6) in the main event of UFC Fight Night on Saturday afternoon — just the second UFC event to air on ABC (3 p.m. ET, prelims at noon on ESPN, early prelim at 11:30 a.m. on ESPN+). It’s a massive opportunity for Vettori, although it would have been even bigger had his original opponent, popular Englishman Darren Till, not pulled out of the fight last week because of injury.

The UFC returns to ABC once again as Kevin Holland hopes to rebound from a loss just three weeks ago when he faces rising middleweight contender Marvin Vettori. Holland, who won five times in 2020, hopes to avoid going 0-2 to start 2021.

Speaking to the media this week in Las Vegas, Vettori said the late change in opponent feels more normal than if he had actually got to fight the man he prepared for. It’s been that kind of year for the 28-year-old Italian. He had three fights fall apart on him in early 2020, with one postponed only after he had flown from Los Angeles to London for the event.

If there’s been one constant, it’s Vettori himself. It’s difficult to find a more confident fighter in the UFC right now. He has agreed to every opponent and date change along the way, which not everyone does, and has taken advantage of the fights that have taken place. Particularly, his win over Hermansson in December sent a statement to the rest of the division.

In Holland, Vettori will face a fighter with a lot of perceived upside — in 2020, Holland became the first middleweight in UFC history to record five wins in a calendar year — but also one coming off arguably the worst performance of his career. Just three weeks ago, Holland suffered a lopsided decision loss to Derek Brunson, and afterward he faced criticism over his mental approach. It appeared to many, including his own coaches, that Holland essentially conceded to Brunson before the fight was over.

Because of that, Saturday is an important opportunity for redemption for Holland. For Vettori, it’s an opportunity to add to his four-fight win streak, and also to beat Holland even more convincingly than Brunson — whom the UFC ranks No. 4 in the division — was able to. And if Vettori does that, he said he should be ranked above Brunson as well as the No. 5-ranked Till.

Vettori’s path to this main event slot on ABC has been unconventional and anything but a straight road, but if he can see it through past Saturday, his future should become slightly more predictable. Because if he wins this fight, there will be only a handful left that make sense. And all of the options on that list would be big-time fights.

21: Days it will have been, on Saturday, since Holland’s March 20 loss to Derek Brunson. This ties Holland with Michael Bisping and Deiveson Figueiredo for the shortest turnaround from main event to main event in UFC history.

164: Significant strikes landed by Vettori in his most recent fight, a unanimous decision win over Jack Hermansson in December. That output set a UFC record for a five-round middleweight bout.

59.4: Percentage of Holland’s significant strike attempts that land, the best rate of all time among UFC middleweights (minimum five fights and 350 attempts). His challenge this time will be finding Vettori, whose significant strike defense (66.4%) is the best among active UFC 185-pounders.

8: Victories by Holland since his 2018 UFC debut. That is the second-most middleweight wins during that time, behind only current middleweight champion Israel Adesanya‘s nine. Holland’s five stoppage wins are the most in the division over that span.

6: UFC wins by Vettori, tying him with Alessio Sakara for the most by a fighter born in Italy. 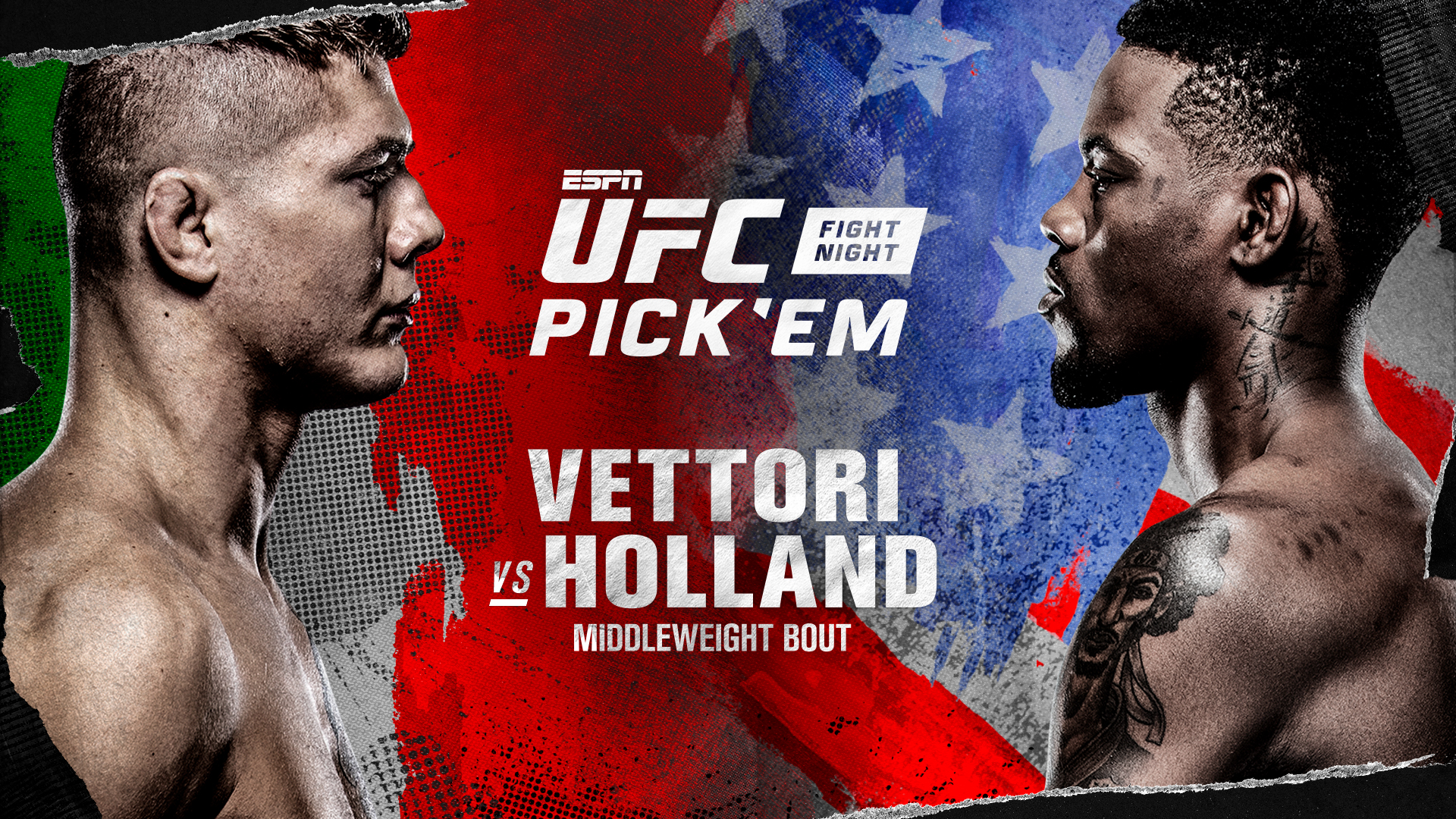 Play for a chance to win a FREE streaming of UFC 261! Make Your Picks

“Kevin Holland has a lot to prove — not only to himself, but to his team and his fans,” UFC men’s bantamweight champion Aljamain Sterling said. “I think he’s going to come out with the mindset of doing such. He’s a good striker; he’ll give Vettori some problems on the feet. … Vettori is a better grappler. He’s tough, he’s durable. He outgrappled Jack Hermansson when he needed to [in a unanimous decision win in December], so he’ll do well in those situations. If he tries to utilize his striking, I think there’s a good chance he’ll come up short. That could be the difference.”

Check out how Sterling and other experts break down and predict the outcome of Saturday’s fight.

Watch the main card on ABC, available on cable/satellite as well as via streaming.

Watch the prelims on ESPN. Don’t have ESPN? Get instant access.

Main card and prelims also available on ESPN Deportes and ESPN+. ESPN Deportes is available at the same link above for ESPN. If you don’t have ESPN+, get it here. Also: Download the ESPN App | WatchESPN | TV schedule

1. Arnold Allen, who fights Sodiq Yusuff in the featherweight co-main event, has won all seven of his UFC bouts, tying him with champion Alexander Volkanovski for longest active win streak in the division. A win would make Allen the 13th fighter to start a UFC career 8-0 — and nine of them won a title. Allen has the second-best significant strike defense among active 145-pounders (67.8%), but Yusuff lands 6.1 per minute, more than twice the UFC average.

2. Jim Miller‘s prelim against Joe Solecki will be Miller’s 37th UFC fight, the most of any fighter in promotion history.

3. Nina Nunes, No. 10 in the ESPN strawweight rankings, faces Mackenzie Dern, whose three submission wins are tied for the most ever in the UFC’s 115-pound division.

4. Da Un Jung and William Knight, who meet at heavyweight, have something powerful in common: knockouts. Jung has won 10 of 13 career fights by KO/TKO, and Knight has won 8 of 9 the same way.

5. Jack Shore, who fights Hunter Azure in a bantamweight prelim, won his first two UFC fights by submission, making him 13-0 with 12 wins by finish.