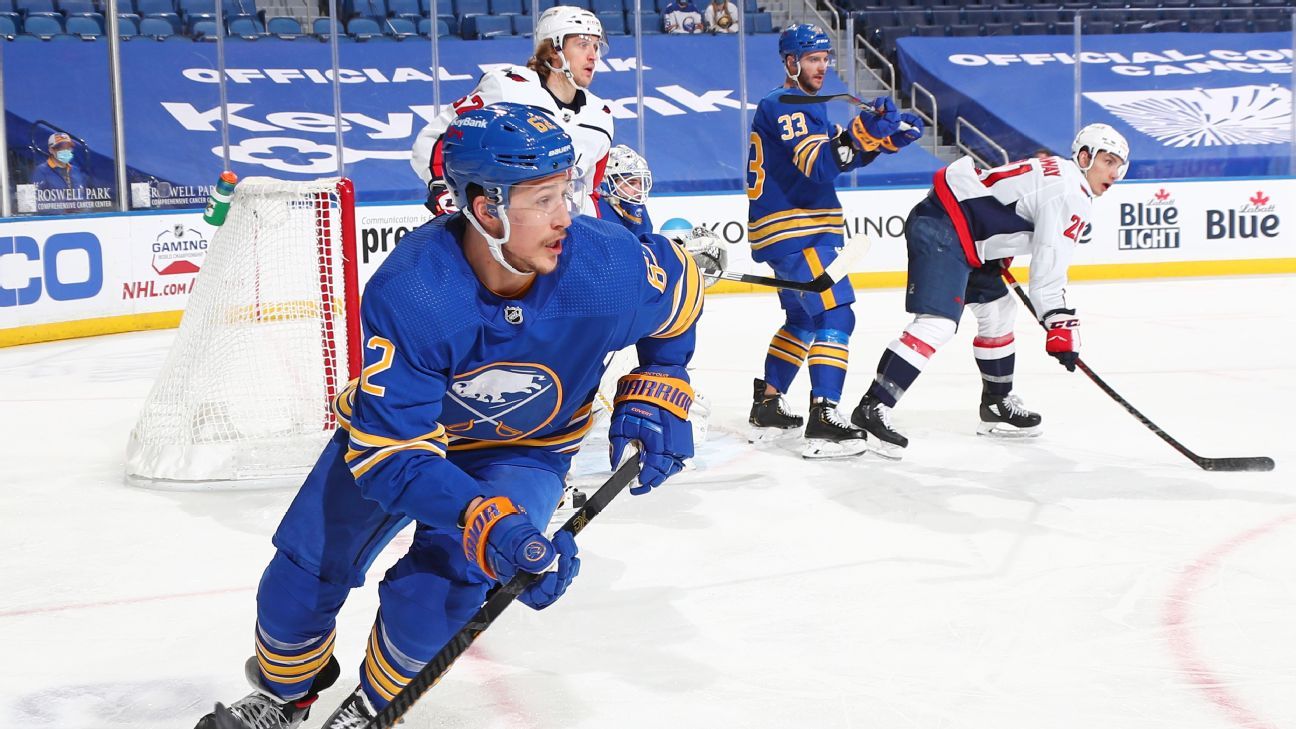 The 2021 NHL trade deadline is fast approaching, and all deals must be completed by 3 p.m. ET on Monday, April 12. We’ve gone through the deals we’d like to see, a team-by-team guide to the deadline, and a player-by-player look at the individuals that could be on a new team by next week.

As each major deal happens, national NHL reporter Emily Kaplan and senior NHL writer Greg Wyshynski will be grading both GMs involved on the particulars of each swap.

The most recent trade grades are at the top, and we’ll continue to update right through the final deadline deals.

When the Sabres acquired him, Montour was seen as a solid young defenseman with an even higher ceiling. He had 63 points in 169 games in Anaheim, skating 20:47 on average. He blocked shots and delivered hits. Buffalo saw that promise, traded a conditional first-round pick for him and … watched Montour become one of the NHL’s most ineffective defensemen on the defensive side of the puck.

Montour had an expected goals percentage of 46.12% during his three seasons in Buffalo, including 44.67% this season through 38 games. He’s averaged 0.38 points per game offensively, but has been an absolute drag defensively on the Sabres. In three seasons, Montour has a minus-12.5 goals scored above average and cost his team 2.3 wins in the standings. He’s been sub-replacement level for the Sabres.

The operative phrase here: “For the Sabres.” The majority of his time in Buffalo was spent under the ultimately ineffective coaching of Ralph Krueger, on a porous defensive team. He has seven points in 12 games under new interim coach Don Granato, skating to a plus-1 rating. He plays on the penalty kill and saw power-play time in Buffalo as well.

The Panthers made two trades with the Chicago Blackhawks recently to open up some cap space, the majority of it leaving with forward Brett Connolly ($3.5 million average annual value). With Aaron Ekblad done for at least the regular season after fracturing his left leg, the Panthers prioritized adding a defenseman at the deadline, and Montour could slide in on a pairing with MacKenzie Weegar.

If a change in scenery does the trick and Montour rediscovers his defensive game — i.e. if the “Buffalo Effect” is real — this could be a very good stop-gap move, as Montour is a pending unrestricted free agent. Either way, the risk was only a third-round pick for a team with eyes on the postseason.

In Feb. 2019, the Sabres acquired Montour for defenseman Brendan Guhle, who is currently in the AHL, and a conditional first-round pick. The pick the Sabres ended up sending to Anaheim was acquired from the San Jose Sharks in the Evander Kane trade, on the condition that he resigned with San Jose and that the Sharks made the 2019 Stanley Cup Playoffs.

Before that second condition was met, the Sabres traded a conditional first to Anaheim for Montour. The condition: That the Ducks would receive either the Sharks’ first-rounder in 2019 or the St. Louis Blues‘ first-rounder in 2019, which Buffalo acquired in the Ryan O’Reilly trade. If the Blues’ pick was between Nos. 20-31 (it was), then Anaheim had the option to take either the Blues’ or the Sharks’ first-rounder from Buffalo. The Sharks and the Blues actually met in the Western Conference finals with the fate of the Ducks’ conditional first-rounder on the line. The Blues won the West, and the Anaheim used the Sharks’ pick to draft winger Brayden Tracey at No. 29 overall, courtesy of the Sabres.

History lesson over. Pencils down.

At the time, the acquisition of Montour was praised. He was young. He was under contract beyond that season, and the Sabres would control his rights after that. But like … well, pretty much everything under the previous regime, good intentions don’t ensure good results, and Montour languished on the Sabres’ blue line.

Given that — and the fact that Montour is a pending free agent — a third-round pick seemed like the ceiling for GM Kevyn Adams, especially since the Sabres didn’t retain any salary to make the deal work. A frustrating erosion of value for a 26-year-old defenseman, but that’s reality for Buffalo in this trade market. — Wyshynski

GM Lou Lamoriello said it best when explaining the Islanders’ trade for Palmieri and Zajac: There are no surprises with these two. “I know what they bring on the ice. I also know what kind of people they are and what they bring to the locker room. Chemistry is very important for me,” he said.

It’ll mostly be for the better.

Palmieri is having a down year — there’s no getting around that. The question is whether a short-term change in scenery can reignite his offense. He’s been better than 0.33 goals per game since 2015-16; this season, he’s at 0.24, with eight goals in 34 games. He has not been lower than 0.66 points per game during that span; this season, he’s at 0.50. Palmieri has some encouraging underlying numbers (51.41 expected goals percentage). This isn’t a case of his production hitting some kind of sudden, steep decline. Whether they deploy him on the left of Mathew Barzal or on the right of Jean-Gabriel Pageau, Palmieri is going to help fill the offensive void left by the loss of Anders Lee for the season.

Zajac was an interesting addition to the deal. His best days are behind him, and he has managed a 46.88 expected goals percentage at 5-on-5. Like Palmieri, he’s been a sub-replacement-level player for the Devils this season. His calling card used to be as a penalty killer, but he has been ineffective there, too.

What he is at age 35 is a strong character player who can chip in on offense (18 points in 33 games) while playing a bottom-six role. It also gives the Islanders considerable experience and depth at the center spot: Barzal, Brock Nelson, Pageau, Casey Cizikas and now Zajac. Lamoriello drafted him. Lamoriello knows him. He’ll be properly cast by Barry Trotz.

This isn’t the kind of trade that secures a Stanley Cup for the Islanders. But it is the kind of trade that, if they’re so blessed to hoist the chalice at the end of the season, they’ll look back on as having added vital pieces to complete the puzzle. And it didn’t cost them much at all, given that the return didn’t include an upper-tier prospect and did include a first-round pick in a very mysterious draft.

If the market for Palmieri was as robust as it appeared to be — the Toronto Maple Leafs and Boston Bruins were among the reportedly interested teams — then one wonders if the Devils couldn’t have acquired a prospect, rather than a low first-round pick in a draft that many general managers admit is a complete crapshoot thanks to the lack of in-person scouting and other COVID-19-related impacts.

Essentially, that’s what the trade was: Palmieri for a first-rounder. Greer and Jobst are depth talents on expiring contracts, although Greer has the potential to contribute. Zajac’s trade value was extremely limited due to his age, effectiveness and full no-trade clause. It was likely going to be a team in the New York metropolitan area or back home in Winnipeg, or it was nothing. So the conditional fourth-rounder for Zajac is what it is.

As I’ve written about before, it’s a weird NHL trade deadline. Maybe given all the odd forces affecting teams, this was the best return that GM Tom Fitzgerald could get for Palmieri in a down season. That’s something we’ll know for sure when the dust settles after Monday’s deadline.

And it’s not out of the question that the Devils have gotten a first-round pick for a player who’s back on their roster next season via unrestricted free agency. Fitzgerald called trading Palmieri “a business decision between Kyle and this organization at this moment.” I asked Fitzgerald about that possibility; he shut it down by saying Palmieri is now on another team and he can’t comment. Which wasn’t a “no.”

Still, the value coming back to New Jersey for having retained 50% of both players’ salaries should have been a bit more than a low first-rounder, two depth players and a fourth-round pick that becomes a third if the Islanders make the Stanley Cup Final.

Now they’re left hoping that the Islanders stumble a bit to make that first-rounder a higher one. Well, everyone but their GM is hoping that, apparently.

“I hope the pick we get is the 32nd pick. I hope both of these gentlemen win the Cup,” said Fitzgerald. — Wyshynski