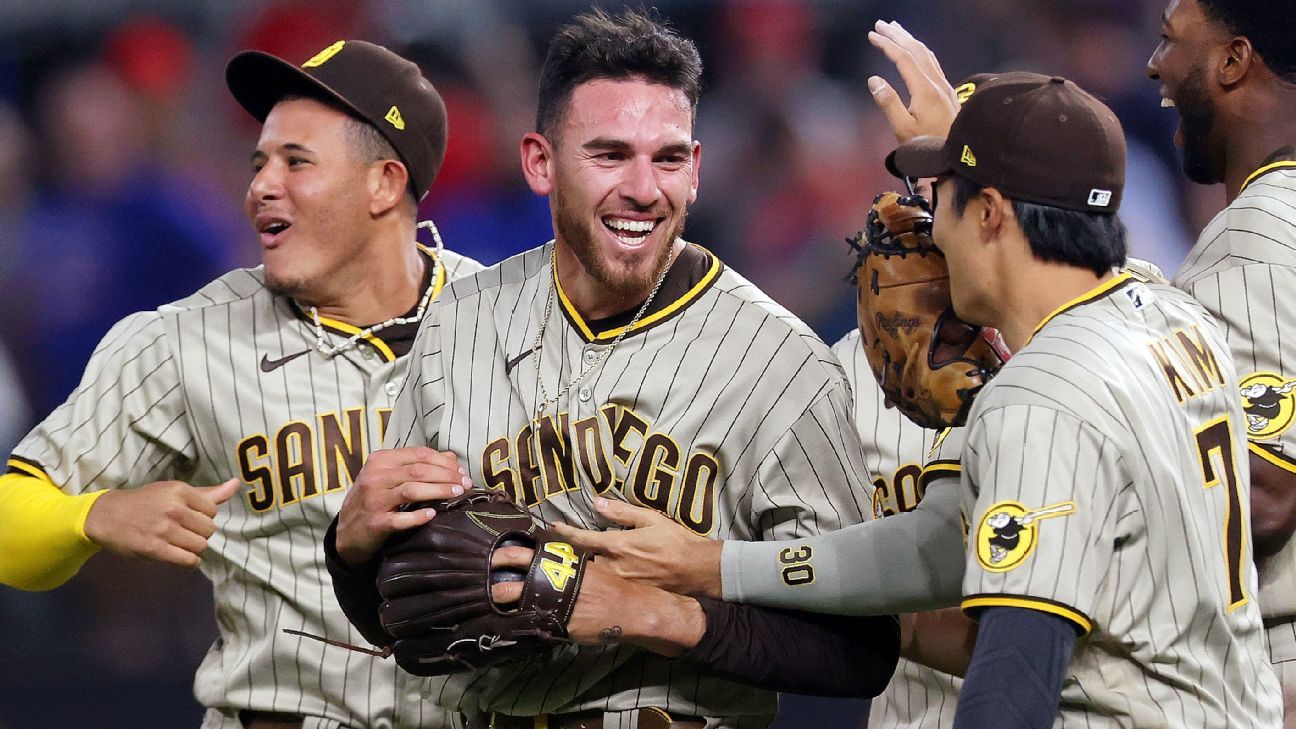 The San Diego Padres are no longer the only major league team without a no-hitter. And for that they can thank local product Joe Musgrove, who twirled his first career no-hitter in a 3-0 victory over the Texas Rangers at Globe Life Field on Friday night.

Musgrove’s outing, which included 10 strikeouts and just one baserunner — on a hit by pitch in the fourth inning — snapped the Padres’ streak of regular-season games without a no-hitter at 8,206.

“It’s awesome to have it be in a Padres uniform,” said Musgrove, who had never thrown a no-hitter at any level. “To have it be the first in the history of the franchise, that’s incredible.”

Musgrove, 28, retired the first 11 Rangers hitters in order, then plunked Joey Gallo and retired the next 16. He began the bottom of the ninth at 103 pitches, a concerning pitch count given the caution managers are expressing with their pitchers coming off a shortened season.

David Dahl lined out to second baseman Jake Cronenworth, Leody Taveras hit a tapper back to the mound, and Isiah Kiner-Falefa grounded out to Ha-Seong Kim, who is temporarily replacing the injured Fernando Tatis Jr. at shortstop.

“There was like three different scenarios where I thought I lost it,” Musgrove said.

Musgrove, who grew up in El Cajon, California, roughly 15 miles from San Diego, is in his sixth major league season. He previously pitched for Houston (2016-17) and Pittsburgh (2018-20) and never had thrown a complete game in his previous 84 career starts.

“I’m freaking exhausted, man,” he said. “There was no way I was coming out of that game.”

Padres manager Jayce Tingler let Musgrove go the distance because he was so efficient — and knowing what it would mean to have a hometown player end the franchise’s no-hitter drought in its 53rd season.

“I think in a way that makes it, if it can be any sweeter, any more special for him, to do it growing up in San Diego and this being his team, it’s about the perfect story written,” Tingler said.

Musgrove threw 77 of his 112 pitches for strikes.

It was the first no-hitter in the majors this season and only the second complete game.

The majors’ last no-hitter was thrown by the Chicago Cubs‘ Alec Mills on Sept. 13, 2020. His catcher was Victor Caratini, who was also behind the plate for Musgrove.

San Diego acquired the big 28-year-old Musgrove as part of a seven-player, three-team trade on Jan. 19. He pitched for Pittsburgh last season.

In his debut for San Diego, which came at home last Saturday, he struck out eight in six scoreless innings against Arizona. He had no walks in winning that game, when he threw 57 of 78 pitches for strikes.

It was the fourth time a no-hitter was thrown against the Rangers. The last had been by Mark Buehrle of the Chicago White Sox on April 18, 2007.

According to Baseball-Reference, there had been 307 no-hitters in MLB history before Musgrove and the Padres. That included 293 individual no-hitters and 14 combined no-nos.