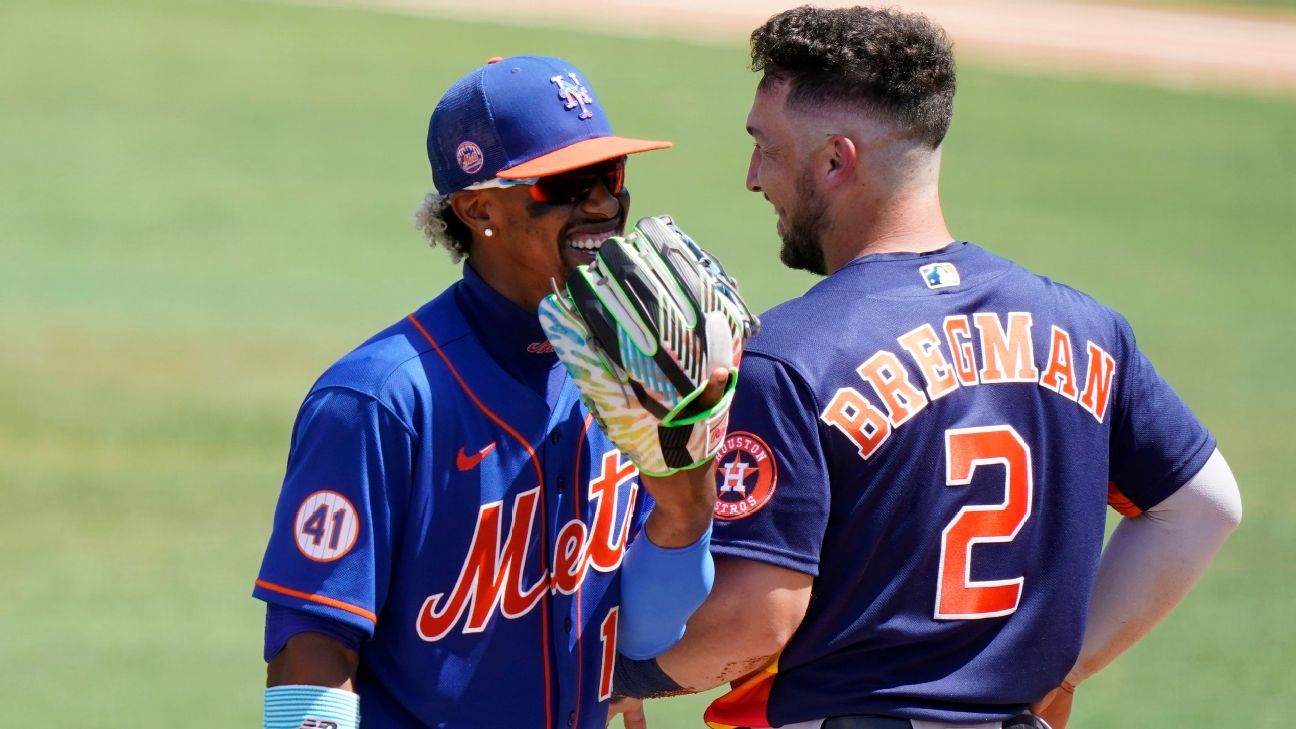 Normalcy — sort of — has returned to baseball for the 2021 MLB season. There are still pandemic-related obstacles for the sport to navigate, but at least teams are scheduled to play 162 games and fans have returned to stadiums. The usual rhythm of the sport will take hold soon enough, and like any new season, questions abound.

Which star player will put his bummer of a shortened 2020 year in his rearview mirror with a return to his former elite status? Will new monitoring of doctored baseballs make a difference on the field? Who will be the must-see players to watch this season? And which big names could be moved in blockbuster deadline deals?

We asked a team of 28 executives, players and scouts for answers to these and other pressing questions going into the start of the new season. The caveats were they couldn’t vote for their own team or players, all voters were promised anonymity so they could vote freely and not all participants answered every question.

Here is what those around the game predict will happen in baseball this season.

Which team will be the biggest surprise, good or bad, in the league this year?

As you might expect, this question garnered a variety of answers with two teams standing out. People in the game are impressed with what the Royals did this past winter and unimpressed by the Reds’ lack of moves.

It’s no surprise the NL East was represented on both lists as predictions for that division differ wildly among the experts. The Cubs also appeared in each spot because they have talent, but could be selling a lot of it off come July.

“The Red Sox will challenge for the AL wild card behind another great year from Eduardo Rodriguez, the return to form for J.D. Martinez and catcher Christian Vasquez establishing himself as a top-five catcher in the game,” said one executive.

“Kansas City,” said another. “They had a great offseason and think they have a chance to be a really solid team.”

“The Astros started their downward trend last year,” said one scout. “The division isn’t stacked, so they may hang around the race, but they aren’t nearly as deep as they once were.”

“The Cubs just have too many things going on,” another scout opined. “A new starting staff combined with a large number of players in their walk years will make for a difficult season to navigate.”

Another scout had the exact opposite view of the Cubs: “Some clubs think they will flounder with their soft-tossing rotation, when in fact, the slower pace will confuse lineups — that group is just so different than the rest of the league.”

“I’m sure fans will be surprised but the Mets won’t be very good, one player stated. “Lindor can’t teach them how to win on his own.”

Which star player who struggled in 2020 is most likely to return to form?

It’s not a surprise that several of these players have expressed their excitement over in-game video returning to MLB in 2021. Martinez and Rizzo are near the top of that list. Interestingly, Yelich is not one of those guys who relies on it. He admittedly simply wasn’t good last season.

“Christian Yelich,” one executive said. “Because his 100-point decrease in batting average on balls in play will reverse itself,”

“Yelich can’t be worse so I’ll go with him,” a player chimed in.

“J.D. Martinez with the ability to get back on routine through the use of video,” said another executive.

“Carlos Correa … just think he has something to prove heading into free agency,” a third voter said.

“Anthony Rizzo has always proved to be reliable. I’ll take him,” another player said.

Who will win AL and NL MVP?

It feels like some voters were trying to find someone besides Trout in the American League, but only Aaron Judge came close. Considering the Angels outfielder has finished in the top five in nine consecutive years, can you blame anyone who chose Trout?

Are you ready for MLB Opening Day? Here’s everything you need to get up to speed for a new season on the diamond.

Who could pass Trout? | Excitement guide

“Corey Seager,” said one scout. “He’s going to have an outstanding year, and he has all the weapons around him to put up numbers.

“Mike Trout,” said the same scout. “It’s a little better lineup, but he doesn’t even need protection because he’s that good.”

Who is one player you sit down in front of the TV to watch play right now?

“Juan Soto hitting,” said one scout. “No one will ever be Barry Bonds, but Soto’s combination of plate discipline and power is fun to watch.”

“Clayton Kershaw,” an executive offered. “I still like to watch his starts.”

“How do you not love watching Hendricks carve up hitters at 88 mph?” a fellow pitcher stated.

Which pitcher has the nastiest stuff in baseball right now?

“DeGrom’s repertoire in 2020: four-seam sat 99 mph, slider at 93, change at 92,” said a scout. “But honorable mention to Corbin Burnes whose spin rates on five different pitches rated in the top eight in MLB among 209 qualifying pitchers: second in four-seam; second in sinker; seventh in cutter; third in slider; eighth in curve.”

“Gerrit Cole,” said an executive. “He seems to have no-hit stuff every night.”

“Devin Williams has a changeup like a left-handed breaking ball,” said another exec.”

“When healthy, Strasburg has just too many weapons,” said a player.

Who is the one player most likely to be traded by the deadline?

Several participants admitted they have voted for Bryant in past surveys but that this will be the year considering he’s a free agent come November. As for Story, some simply believe he’ll be moved as part of the rebuilding process the Rockies began the moment they traded Nolan Arenado.

Top relievers become heavily sought after around the deadline, but no voter could zero in on one. The first half will dictate the emergence of those names.

And, yes, one voter chose the entire Cubs team since Chicago has no less than 13 players beginning their walk years. “It’s now or never for Bryant,” one scout said. “The Cubs have to take what they can get.”

“Teams like that experience. But he has to show he still has the stuff for a pennant run.”

“Texas will not be competitive, and his defensive versatility and attitude will always be valuable to a contending club,” said one voter who chose Brock Holt.

Will the enhanced monitoring of doctored baseballs have a small or large impact on the game in ’21?

Most in the game can’t envision how this policy is going to play out for it to have a big impact. Many are hoping the threat of punishment and enhanced monitoring will dial down the use of illegal substances, but most are unclear of the process so their fallback was to vote for “small.” Two voters called it “eyewash.”

“Small because I think the emphasis on it will slowly go away come summer and be a non-issue by the postseason,” said one scout.

“Small,” said one exec. “Unless someone breaks the gentlemen’s agreement not to ask the umpires to check, because that could lead to a free-for-all.”

“If they actually monitor, it will be a huge impact,” said one player. “Some guys have no idea what to do without it.”

“Large,” said a scout. “Hit batters will be at an all-time high.

What will be the biggest adjustment in going from last year’s shortened season to a full 162-game season?

There wasn’t one specific answer to this question but most revolved around pitching.

The jump from 60 games to 162 will be interesting but some relievers, in particular, say they’re fresher than ever. Starters will be monitored more closely. 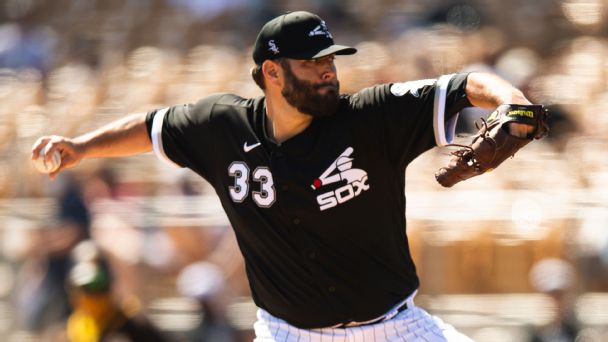 Starting pitchers are bracing for an unprecedented innings jump this MLB season.

“Pitching injuries for sure but also how quickly teams adjust to a guy who was great in 2020 but struggles in 2021,” one exec said. “How long of a leash will teams give to the 2020 season?”

“If a team is forced to deal with a COVID breakout, the scheduling issues could be massive and will create a lot of issues,” another exec stated.

“There will be a ton of total pitchers used this year,” a voter said. “Lots of four-inning starts, games with six-seven relievers and shuffling of rosters.

“We will get more days off,” a player simply stated.

Who’s your World Series winner — if not the Dodgers?

Since the L.A. Dodgers are an overwhelming pick to win this year’s World Series, we asked for a non-Dodgers choice here. There was a good variety of answers, although Yankees are the clear-cut favorite if it’s not the Dodgers this season.

“I just like the Yankees as long as they’re healthy,” one scout said. “They have tons of talent. It just has to be on the field.”

“The Braves are as dangerous as ever,” another scout said. “If the Dodgers open the door slightly, I say the Braves kick it in.”‘

“Mets,” said one voter. “Off-the-wall choice, but this new owner, with money not an issue — and there’s going to be a lot of money issues with people dumping salaries — when you can buy guys and spend money and not have to give up prospects, that’s going to be huge. I believe that the Mets are capable of that.”