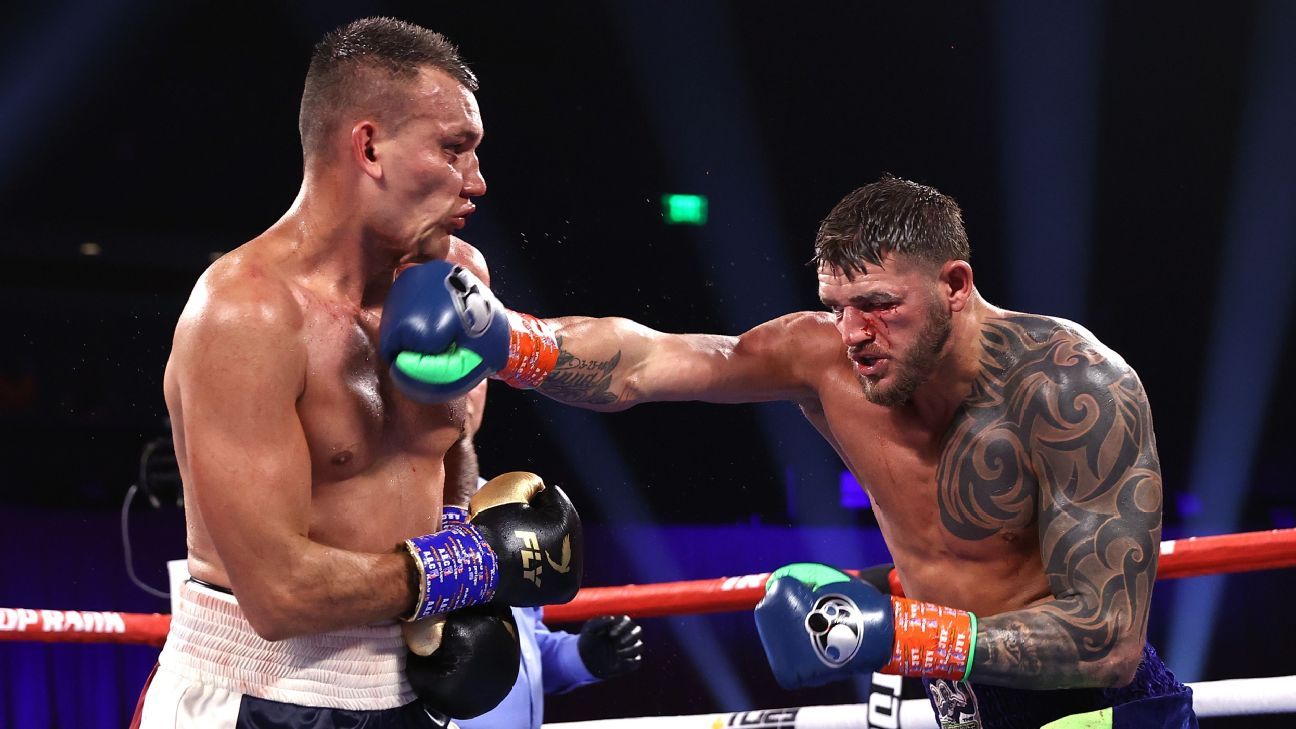 On two separate occasions, Smith had Vlasov hurt and a punch or two away from getting a big knockdown. However, Smith never had the ring acumen or discipline to find the right combination to inflict massive punishment.

And even in a victory, those technical flaws showed why Artur Beterbiev and Dmitry Bivol should be considered the best light heavyweights in the world. Smith won a majority decision over Vlasov that could have swung either way. All three scorecards were within three points and one judge had it a draw.

Even Smith seemed to concede that he needed to be sharper, which is an accurate realization with Beterbiev potentially looming on the horizon.

“I gotta get back in the gym and keep working on my technique and stuff,” Smith Jr. said. “I believe I’m going to start unifying belts.”

The seventh and 11th rounds at the Osage Casino in Tulsa, Oklahoma, were prime examples of Smith’s flaws. In the seventh, Smith Jr. had Vlasov hurt and tried to land a big right hand over the top, an effective power shot over the course of Smith’s career. But Vlasov was cagey enough to keep his distance, stay out of range and avoid another big punch. Vlasov survived the round.

The 11th round was another missed opportunity. Smith ripped Vlasov with big body shots and Vlasov staggered yet again. Smith wildly missed with a hook, and seemingly out of frustration, tapped Vlasov twice on the back of the head. Vlasov made the most of the opportunity, went down and took a minute to catch his breath after the referee deemed he went down with an illegal punch.

On top of the lack of discipline, Smith never seemed to have the right blueprint to beat Vlasov, who looked sharper for the majority of the night.

Pure power and one-punch aggression won’t be enough for Smith to beat Beterbiev, an exceptional pro who has won all of his 16 fights by stoppage. Bivol, another top light heavyweight, easily dispatched Smith in 2019 in a lopsided unanimous decision.

Fortunately for Smith, he did enough at the end of the night to swing the fight his way and win the belt. But he’ll need a much better performance to challenge the top 175-pounders in the world. — Ben Baby

Top Rank might have a couple of exciting heavyweights on their hands.

Jared Anderson and Efe Ajagba showed they’re ready for better competition in their appearances on the Smith-Vlasov undercard. Anderson scored a second-round TKO win against Jeremiah Karpency, who wilted after a couple of body punches (it’s hard to blame Karpency, if we’re being honest). Then Ajagba provided the stoppage of the night with a massive right hand that immediately turned Brian Howard’s lights out in the third round of their bout.

Anderson took full advantage of his opportunities inside Top Rank’s bubble in 2020 and has been active despite the challenges of the pandemic. Ajagba could use a bit more polish, but the 26-year-old has enough skills to push any of the mid-tier heavyweights who are a big step below the elite fighters at the top of the division.

Anderson and Ajagba’s recent outings should push Top Rank to find each fighter better competition as they start to make the ascent in their respective careers.

Why Claressa Shileld’s next opponent should be Savannah Marshall

It’s obvious now. After trying to figure out fights for three-division champion Claressa Shields over the past few years — including her move to an all-women’s pay-per-view card last month against Marie-Eve Dicaire — her next boxing opponent is clear.

It has to be Savannah Marshall.

Hahaha like @Savmarshall1 had in 2018 when she & her team turned down a contract from my team @SalitaProm 😂😂😂 I’ve said it before @EddieHearn get the $ right I’ll show you how I’ll beat another hype job 🗣 https://t.co/MMH40L8Hxd

Marshall defended her WBO middleweight title on Saturday by knocking out Maria Lindberg in the third round. She’s registered KOs or TKOs in her last six fights. Her level of opponents hasn’t been anywhere near the level of fighter Shields has fought as a professional, but Shields has been about winning titles, fighting the best and most intriguing fights and trying to become the best female combat sports athlete of all time.

Part of that is going to MMA, where she’ll make her debut with PFL in June. The other part is continuing to enhance her boxing legacy.

Marshall is the only fighter — amateur or professional — to defeat Shields. That came almost a decade ago, on May 14, 2012 in the preliminaries of the 2012 AIBA women’s world championships. Shields was 17 years old then. Marshall was 20. They’ve both grown as fighters. They’re both undefeated and titleholders.

And they’ve been going back-and-forth verbally for a while now — including again Saturday. It’s time for this fight to happen and little reason for it not to.