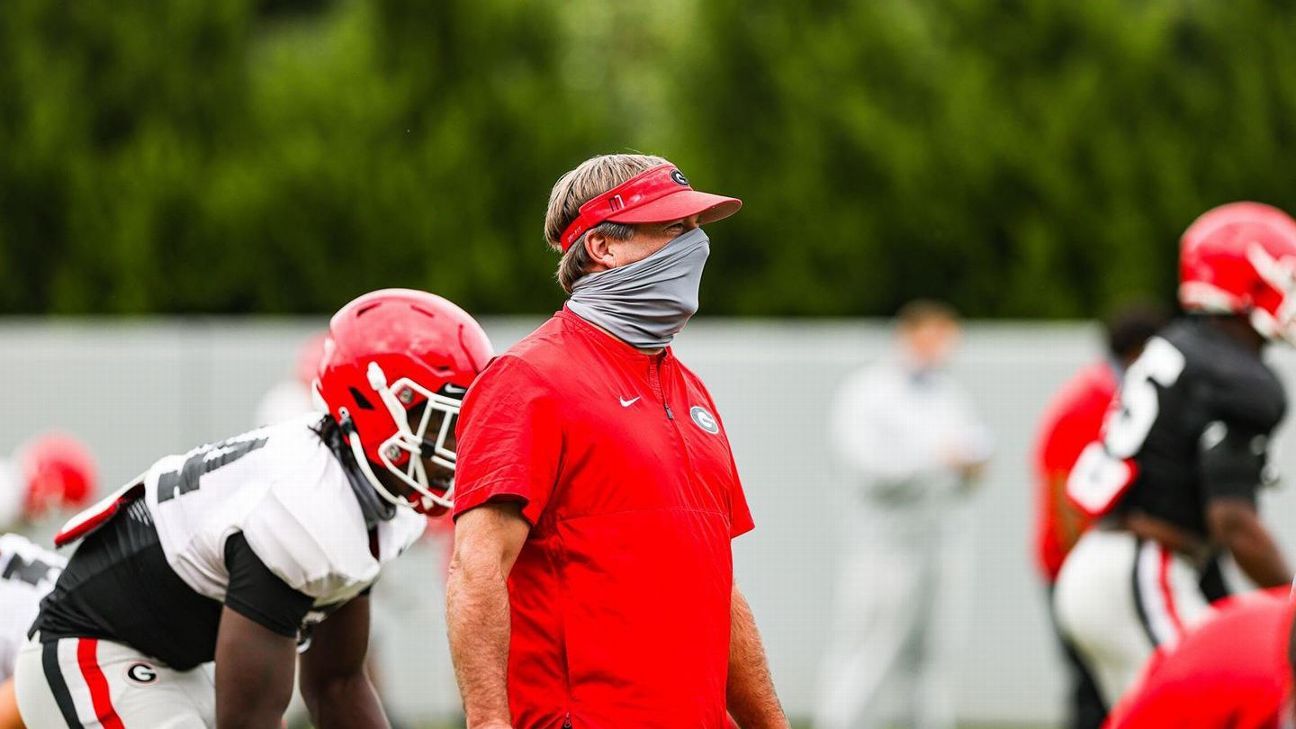 The ESPN 300 has been updated for the 2022 cycle, and as is the case with every college football recruiting class, there are some unique storylines and recruitments to watch for.

This class happens to be unique, as prospects are trying to navigate the process the best they can while being subject to the NCAA-created dead period since last March, when the recruits were still sophomores.

Because of the dead period, the 2022 recruits have not been able to take official visits and, in some cases, haven’t even met the coaches recruiting them.

There have been quite a few challenges with this class on the prospects side and the coaching side with enough film to evaluate, no real camps to showcase talents or see prospects in person, and the inability to build relationships face-to-face.

“I think first, this signing class is going to be the most challenging signing class in all of college football,” Michigan offensive coordinator Josh Gattis said. “I think it’s going to make or break programs, not this year, but three or four years down the road. The time that’s been missed in live evaluations, in-person evaluations, is so critical.

“I actually feel for the kids, because a lot of these kids are forced to make college decisions without stepping foot on a college campus.”

There is the belief that the NCAA will lift the dead period in June, allowing visits, but that has not been officially announced or put in place.

The lack of visits has interrupted the process for a lot of recruits, including ESPN 300 linebacker Shawn Murphy, the No. 32-ranked recruit overall.

“I was planning to take every visit I could and hurry up and wrap up my recruitment [before the pandemic],” Murphy said. “But it has slowed it down. I think I probably would have been committed by now if I would’ve been able to take my visits.”

It does look as though the process will start to get back to normal if visits are allowed once again, but it doesn’t take away from the fact that recruits will still have to make a decision by either the early signing period in December or the late signing period in February.

Ewers is the No. 1 prospect overall and is the third top-ranked prospect in three years to pick the Buckeyes. He originally committed to Texas but flipped to Ohio State, and if he signs with the Buckeyes, he should have an opportunity to play early in his career. Ohio State is currently looking for a new starter at quarterback, and no matter who wins the job in 2021, he will be starting for the first time in his college career. Ewers has all the talent to come in and push the current quarterbacks, and he will help keep that position stable going far into the future.

Jackson is the top-ranked prospect in California, and USC has been on a mission to “Take back the West.” The Trojans made a big push in the 2021 class, signing the No. 8-ranked class overall, and the No. 1 prospect in the state, defensive end Korey Foreman. After losing the top recruit from California the two previous years when Kayvon Thibodeaux went to Oregon and quarterback Bryce Young flipped to Alabama, USC has put all its efforts into the state. Jackson is a five-star corner from Mater Dei High School, so keeping him home was a big priority for the staff.

Johnson is a 6-foot-1, 180-pound corner from Grosse Pointe, Michigan, and his father, Deon, played football at Michigan. The Wolverines were in a good spot to land Johnson, but the defense had its issues this past season, ultimately leading to defensive coordinator Don Brown’s firing. That left the door open for other programs to try to steal Johnson away. As much pushing as schools, including Ohio State, did, Michigan kept him home and added him to the class. Filling a big need and landing a top-20 player is a big win for Jim Harbaugh and his staff.

Eventually, quarterback D’Eriq King is going to leave and the Hurricanes are going to need a new quarterback to help continue the offensive promise King and offensive coordinator Rhett Lashlee have shown. The staff added ESPN 300 quarterback Jake Garcia in the 2021 class, but depth is important and a team can’t have enough quarterbacks coming into the program. It’s difficult to predict which one will pan out, but having Brown and Garcia battle for the spot will only be a good thing for Miami going forward.

When Ewers flipped from Texas, it left a big hole in the recruiting class for the Longhorns. Tom Herman was fired and new coach Steve Sarkisian needed to add a signal-caller to this class. Murphy is a 6-foot-5, 220-pound prospect from Gardena, California, and had a ton of top programs after him. Murphy is a good option to have and fills a big need early on in the cycle. Not having to search for a quarterback late in the process is a big deal for Sarkisian.

Nolen is a 6-foot-3, 300-pound tackle from Saint Benedict School in Cordova, Tennessee. He has nearly every big program after him, but has narrowed his list to Alabama, Georgia, Florida, LSU, Michigan, Ohio State, Oregon and USC.

Similar to other prospects, Nolen is waiting to take visits before he makes any decisions.

“I’ve been able to walk around at Georgia and Michigan, just outside walking on the campus,” Nolen said. “I’m going to make a decision in December, but I’m just ready to get out and see some schools.”

He has been conducting Zoom calls with coaches, but notes it isn’t the same as being able to have that in-person contact and get a feel for who someone really is. Nolen is looking thoroughly into each program and says he’s very interested in business.

His mother has talked to him about the fact that the NFL won’t last forever, so Nolen wants to learn more about potentially owning his own business someday, owning a restaurant or learning how to invest wisely.

Perkins is a 6-foot-3, 200-pound linebacker from Cypress Park High School in Cypress, Texas. Despite being the No. 10-ranked recruit overall, he is the No. 4 ranked prospect from Texas, which says a lot about the talent in state.

Perkins has not yet narrowed his list of schools down yet and says he isn’t in a hurry to do so. That, also, is partially because he hasn’t been able to take any visits.

“I recently walked around TCU, I’m originally from New Orleans, so I can go to LSU and see that,” Perkins said. “But I haven’t met most of the coaches, I’ve only talked to them over the phone. It’s weird, but I know what I’m looking for in my head and I talk to the coaches every day on how they want to use me and what they can offer.”

Perkins isn’t planning on announcing a commitment until the Under Armour All-America game, which is held in the beginning of January.

Stewart is a 6-foot, 175-pound receiver from Liberty High School in Frisco, Texas, and is ranked as the top wide receiver overall.

“I actually feel for the kids, because a lot of these kids are forced to make college decisions without stepping foot on a college campus.”

He decommitted from Texas in part because he hasn’t been able to see anything in person, but said he plans to visit the Longhorns, Texas A&M, Georgia, Alabama and LSU when the recruiting dead period ends.

That said, he said he wants to spread his visits out over the summer and into the season, so there is still time for schools to make an impression.

Teams off to a fast start

There are currently 106 ESPN 300 recruits committed, and Georgia and Ohio State lead the way with nine each in their respective classes.

Georgia has gone on a tear of late, adding in five of its nine ESPN 300 commits since January. The class is led by athlete Deyon Bouie, ranked No. 26 overall, followed by athlete Malaki Starks, defensive tackle Bear Alexander and linebacker Jalon Walker, all ranked inside the top 50.

Ohio State has steadily added top recruits the entire cycle and has been building momentum off of the No. 2-ranked class in 2021.

The Buckeyes have Ewers, as well as five other commitments ranked in the top 75, including cornerback Jaheim Singletary, ranked No. 34 overall, linebackers C.J. Hicks, Dasan McCullough and Gabe Powers and wide receiver Caleb Burton.

After Ohio State and Georgia, LSU has the next most ESPN 300 commitments with eight. The Tigers’ class is led by No. 28-ranked Walker Howard, a quarterback out of St. Thomas More High School in Louisiana, and offensive tackle Will Campbell, the No. 48-ranked recruit.

Notre Dame and Penn State each have seven ESPN 300 commitments in the class. Unsurprisingly, a quarterback once again is the top recruit for each school.

Notre Dame landed Steven Angeli out of Bergen Catholic in New Jersey, the No. 129 recruit overall, while Penn State has Drew Allar, the No. 37 prospect, from Medina Senior High School in Ohio. Allar had quickly climbed up the board for a lot of other schools, but the Nittany Lions were able to secure his commitment.

Teams that need to have success with this class

As Penn State is mentioned above, the program is also mentioned in this section because this fast start is much needed. James Franklin and his staff finished the 2021 cycle with the No. 26-ranked class overall, fifth in the Big Ten.

Franklin said the class wasn’t up to their standards with only four ESPN 300 commitments in 2021. The staff has stepped it up this cycle, already eclipsing the mark from last year.

The Nittany Lions still need to sign the prospects currently committed in the 2022 class, but this fast start is a promising sign that the program is healthy and there aren’t bigger issues in recruiting. With quite a bit of staff turnover throughout the past few years, Franklin and his staff have a chance to create some stability and build relationships in future classes to continue this success.

Auburn also struggled recruiting in the 2021 class, finishing with the No. 28 class overall. The Tigers replaced head coach Gus Malzahn with former Boise State coach Bryan Harsin. Harsin was hired after the early signing period was over, meaning he didn’t have a chance to recruit last cycle.

But now, he and his staff will have to be creative in their efforts to secure a top class with the dead period still intact. Coming from Boise to Auburn, there will be a big need to bring prospects, their families and even high school coaches on campus to build relationships in person. As of now, Auburn only has one ESPN 300 commitment, so that will need to change very soon.

Florida State is another school that has dealt with instability in recent years, but now has a chance to right the ship with Mike Norvell and his staff. The Seminoles finished in between Penn State and Auburn in the class rankings at No. 27.

That’s not to blame Norvell and his staff — they inherited a mess — but now is when they need to push forward. The coaches are off to a good start with four ESPN 300 commitments, including two ranked in the top 25. Having the Seminoles finish in the top 15 in the class rankings would be a big improvement from the past few years.