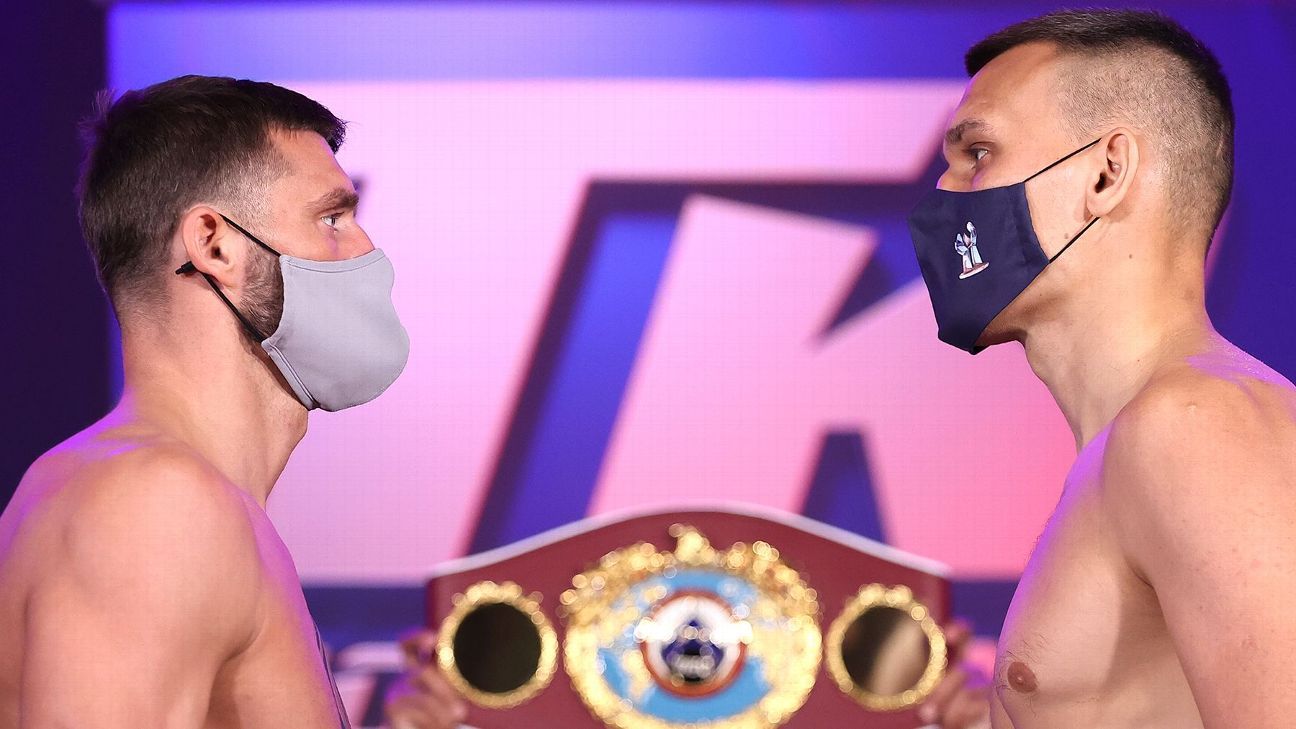 Light heavyweight contenders Joe Smith Jr. and Maxim Vlasov will fight in the main event of Saturday’s Top Rank Boxing card with the vacant WBO world title on the line. The show takes place at the Osage Casino in Tulsa, Oklahoma (ESPN and ESPN+, 10 p.m. ET, with undercard fights on ESPN+ at 5:30 p.m. ET).

Smith (26-3, 21 KOs), 31, of Mastic, New York, has won two consecutive fights since losing a unanimous decision when he challenged Dmitry Bivol for the WBA light heavyweight title in March 2019. In 2020, Smith defeated Jesse Hart by split decision, and Eleider Alvarez by ninth-round TKO.

The Smith-Vlasov matchup was originally scheduled for February, but Vlasov tested positive for COVID-19 and the bout was postponed.

“I was 100 percent ready to go back in February, but it’s OK. I had time to enjoy my wedding day and now I’m just ready to go once again,” Smith said Thursday. “Becoming world champion and hearing the words, ‘And new!’ it’s going to be an amazing feeling. This is everything I have been working for since I was 15 years old.”

Russia’s Vlasov (45-3, 26 KOs), 34, a former cruiserweight title challenger, is 3-0 since moving down to the 175-pound division. He has victories over Omar Garcia, Isaac Chilemba and Emmanuel Martey, all in 2019. He hasn’t fought since defeating Martey in November 2019.

Follow along as recaps will be posted after each fight. You can also watch the fights here.

Jeremiah Milton impressed his hometown Tulsa fans with a devastating one-punch knockout in the first round of a four-rounder against Jayvone Dafney. It was an outcome that was brewing from the opening bell.

Dafney (2-3, 2 KOs), 33, from McComb, Mississippi, had the refined technique of someone in a viral video of a street fight, throwing wide, slapping punches with his chin in the air against Milton, who employed a more traditional approach.

It paid off for Milton (3-0, 3 KOs), 26, of Tulsa, Oklahoma, when he landed a thudding, overhand right that had Dafney knocked out, seemingly frozen with his back against the ropes. Milton showed incredible restraint in not following up a punch before the referee eventually realized that Dafney was out on his feet and stopped the fight at 1:19 of the round.

Conto stops Cortes in Round 1

Heavyweight Sonny Conto wasn’t in the ring long. He quickly knocked out Waldo Cortes in the first round of a four-round fight. But Conto’s craftsmanship is something boxing purists will love.

Conto (7-0, 6 KOs), 25, of Philadelphia, Pennsylvania, landed a strong jab often throughout the fight. He tripled it up at point as Cortes (6-4, 3 KOs), 29, of Phoenix, Arizona, was constantly flustered by the lead left. That jab set up the big, straight right hand that floored Cortes, forcing r=the referee to stop the fight at 1:41 minutes.

Conto has won his last three fights in the first round, totaling 6:49 minutes of fight action since October 2019.