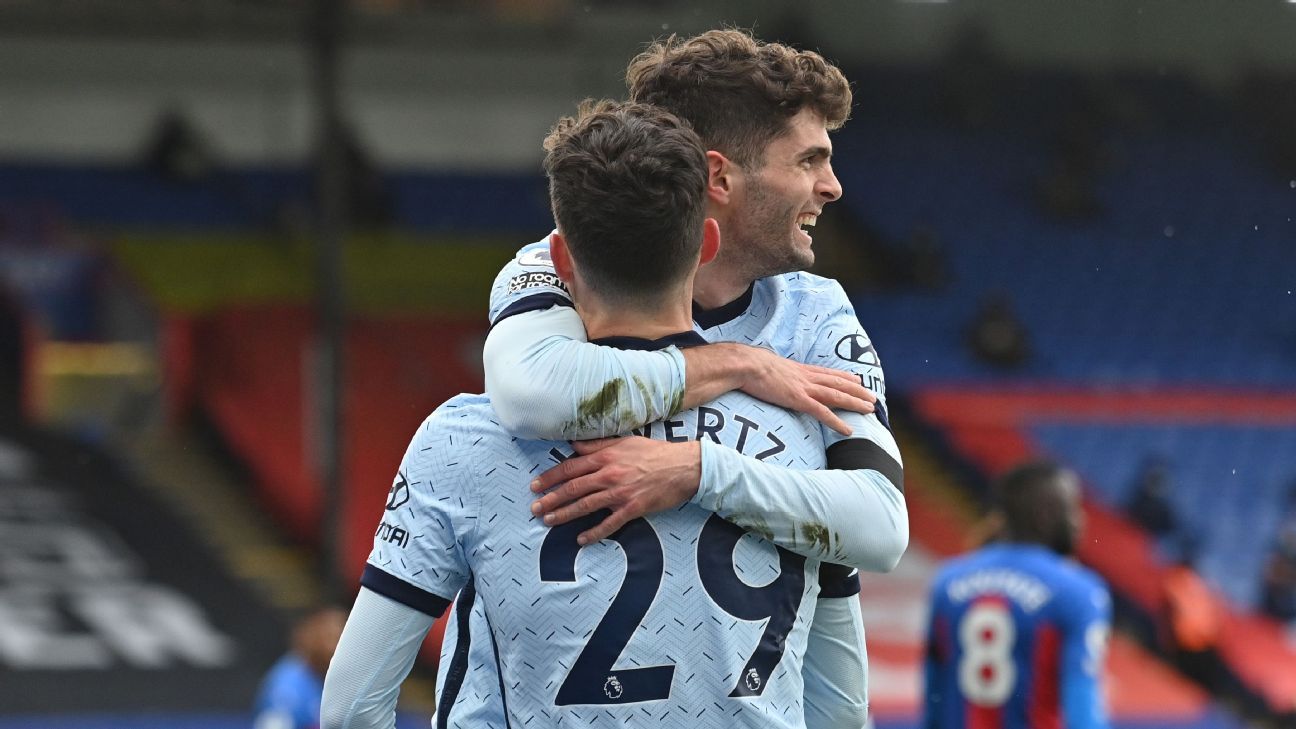 It would be an unexpected bonus for Chelsea if Kai Havertz discovered his best form while also solving what has become a problem position for Thomas Tuchel.

The expectation remains that the Blues will sign a centre-forward this summer with senior figures at the club believing they are competitive in the race for Borussia Dortmund‘s Erling Haaland. The Blues are also keeping tabs on several other options including Manchester City‘s Sergio Aguero.

But someone has to emerge from the existing squad to help Chelsea end the season strongly and although Timo Werner, Olivier Giroud, and Tammy Abraham will all make their case, Havertz appears a credible candidate after this authoritative 4-1 victory over Crystal Palace at Selhurst Park.

Don’t be fooled by the scoreline. This was utterly one-sided from the first whistle with Havertz and Christian Pulisic scoring inside 10 minutes before Kurt Zouma added a third on the half-hour mark. They could have had several more and it was probably only boredom — think of a cat toying with a trapped mouse before wandering off in the absence of any meaningful contest — that allowed Palace to claw back a shred of respectability, as Christian Benteke headed home substitute Jeffrey Schlupp’s 63rd-minute cross. Reminded there was a game on, Chelsea ended strongly with Pulisic adding a second from close range after substitute Reece James‘s right-wing delivery was deflected into his path by former Blues defender Gary Cahill.

The result marked the first time in 17 matches across all competitions under Tuchel that Chelsea scored more than two goals in a game and it may prove significant that it happened without playing a recognised forward.

“You think I gave the wrong messages for 16 games and now I found the message today? If it is like this, I will reflect what session we did to make them feel like this. You have to take it match by match. I feel it is very, very difficult to score in any Premier League match.

“We are well aware that if we can score four goals and create a lot of chances we did altogether a very good offensive performance. But you cannot divide this match in offence and defence. It is a complex game. While we were attacking, we were closing the spaces, we did not allow Crystal Palace to escape the pressure. We had high ball recoveries, we were very brave in closing up the pitch while we were attacking so I will always give the credit to everybody. “

“We are very happy that today we created a lot and this can happen but next Tuesday against Porto we start from scratch.”

With no traditional striker, Havertz operated as a false nine throughout and shone during the opening 45 minutes, his goal the product of composure and quality to bend a left-footed shot beyond Palace goalkeeper Vicente Guaita. He almost pulled off a stunning second, collecting Jorginho‘s floated pass in behind the Palace defence by flicking the ball over the recovering Patrick van Aanholt with his left foot and shooting with his right, only for Guaita to make a smart save low to his right.

“In my position you always want to score. It wasn’t easy, we created many chances and we maybe should’ve scored more but we are happy,” Havertz said when speaking with Sky afterwards. “I think I have the freedom to go where I want to go and I hope I can continue like that. In the second half, I had one or two good chances to score but of course, I’m happy.

“It’s always easy to play with players that have this quality but after winning 4-1, it’s easy to say you are a good attacking team — but we have to go again and after the season we can speak about it.”

The young German previously played as a false nine on occasion for Bayer Leverkusen prior to his £71 million move to west London last summer and is beginning to put together an impressive catalogue of displays there for Tuchel. The 21-year-old thrived against Everton and Leeds last month, albeit without scoring, but he rewarded his manager’s patience in that department at Selhurst Park in a manner that bodes well for tougher challenges ahead.

The same can be said for Pulisic. Tuchel made some rather telling pre-match comments about the United States international, insisting he could be a “huge weapon” for the club but only if he overcame certain physical and mental issues. His physical problems are well documented having struggled with nagging hamstring issues all season, the mental side less so, perhaps guilty if anything of distrusting his body or trying too hard to impress.

Pulisic has scored just four Premier League goals this season but three of them have come in his last two matches and here — on only his second League start under Tuchel — he pressed the case for offering more than the impact substitute role the German seemingly assigned him.

“There has been a lot of things going on this season but I will work hard to do my best in any way I can”, Pulisic told the BBC. “I was happy I was able to do that today.”

In fact, the manner of this display caps a positive week for Tuchel all round, as he has overcome the first significant test of his time as Chelsea head coach. The 47-year-old, who replaced Frank Lampard in January, cited a lack of attitude and focus in last weekend’s 5-2 home defeat to relegation-threatened West Brom — and the fall-out from that defeat even boiled over into a training ground bust-up between Antonio Rudiger and Kepa Arrizabalaga.

Any lasting rift could have been hugely damaging at this critical point of the season but the situation was quickly put to bed, and on the pitch, Chelsea have responded by taking firm control of their Champions League quarterfinal tie against FC Porto, winning the away leg 2-0, before climbing back into the Premier League’s top four with this commanding performance.

Tuchel and Chelsea are back on track. They will surely stay there if Havertz and Pulisic continue like this.