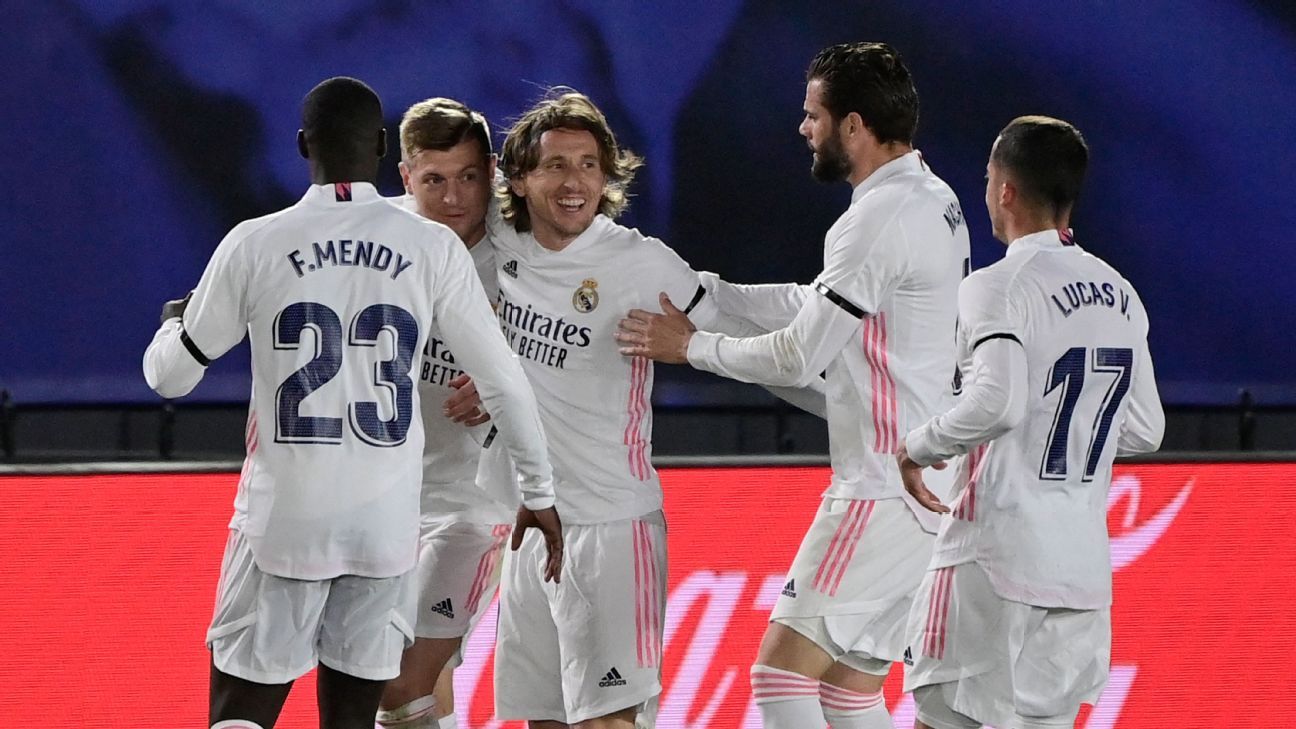 We commonly say that to excel and to create beautifully in high octane, insanely high stakes matches like Saturday’s Clasico between Real Madrid and Barcelona, a footballer needs “eyes in the back of his head.”

Well, on this occasion, a spectator, both coaches, and the poor old refereeing team needed five or six eyes and more than one brain each even to compute what was going on, never mind attempt to influence it and come away with a victory.

Not that this Clasico — which hands a huge “head to head” advantage to the reigning champions Madrid and means that, should they finish tied with Barcelona on points at the top, they will win the league — began that way.

We often talk about the winning of great boxing fights begins at the weigh in. Psychological intimidation. Equally, in football, there are teams who will tell you: “We had the other lot beaten in the tunnel” — perhaps never more famously illustrated than when Celtic became the first British team to win the European Cup, getting lost on the way to the stadium, arriving late, rushing their prep and then, instead of gazing leftwards in the tunnel to their more famous, taller, physically superior more handsome rivals, they burst into their famous “Hail, hail the Celts are here” anthem to the total and utter bemusement of their Internazionale opponents.

Well, this match seems to have been tilted very heavily in Madrid’s favour long before kick off.

What happened is that a radio station in Catalunya found out that, as some had predicted, Antoine Griezmann was on the bench. That directly implied that Barcelona would not use the 3-4-3 which is the formation which has been most devastating in recent weeks and it told Real boss Zinedine Zidane that Frenkie de Jong was going to play in midfield (as he did after half-time in Barca’s narrow 1-0 win over Valladolid last Monday), instead of in the back three.

Zidane, it will emerge over the coming days as Madrid toast their second victory in a Clasico this season (their third consecutive over Barcelona, for a 7-2 aggregate) assimilated the leaked information, gambled on it and ripped up his planned formation.

Zidane gambled that he’d be better served flooding Barcelona’s left side, trying to punch into holes which young Pedri, only playing his second Clasico and just 18 years old, might leave.

Madrid’s French coach, bidding to make his side only the third in Los Blancos’ last 30 years to defend a Liga title (what an extraordinary stat that is) reckoned that if he could get his team past Pedri, and if Vinicius Junior could occasionally drift right off Karim Benzema, then there would be a good chance of pushing Jordi Alba back, stopping his marauding connections with Lionel Messi and, potentially, getting superiority of numbers against the Catalan wing-back high up the pitch.

Bingo. Not even if the subsequent 45 minutes of the first half had been played out on some sort of celestial computer solely controlled by Zidane himself, could the tactic have played out better.

Alba and Messi made no useful connections before half-time (note what happened when they did so in the second half!!), the defender was often swamped and he became jittery — often using the ball abnormally erratically.

And then came the breakthrough. There can’t have been many who’ve enjoyed or lauded Pedri as much as I have over the past few months. I’ve been evangelical because his utterly immense talent, maturity and game management deserve that fervent hallelujah state of description.

But he was at fault here. As were the senior members of Barcelona’s side who didn’t emphasise to him that, while they sorted out how to stem Madrid’s rampage down their right flank, he needed to be positionally attentive to the defensive side of his game. He was not, at any cost, allowed leave big spaces in front of Alba. You can guess what happened.

Pedri’s absence left an enormous void for Federico Valverde to run into — which led to Alba making the wrong choice to try and intercept the Uruguayan, fail, and end up being left trailing in Madrid youngster’s wake. The 2-on-1 situation in which Alba was left probably needed him to jockey and try to split his two opponents but he gambled … and lost.

When Lucas Vazquez was fed the ball, he had a cosmos of time and space to control, look up and judge perfectly the weight of pass into Benzema’s darting run.

Yes, yes it’s a fact that young Ronald Araujo, just back from injury and not yet at full match sharpness, reacted slowly, but Madrid’s utterly magnificent French striker wouldn’t have had the chance to execute his sublime goal-flick if the weight on Vazquez’s cross wasn’t perfect.

Any slower and Benzema would have generated the pace to beat keeper Marc-Andre ter Stegen, any more velocity on the ball skidding across an already damp playing surface and the goalscorer wouldn’t have had so much time to make, literally, the perfect contact. It was a thing of shimmering beauty.

Really, before Madrid extended their lead, at a time when they were beginning to make it look like this could be a thrashing for Spain’s previously most in-form side, Zidane’s Valverde tactic almost made it 2-0.

De Jong (a tired, pale imitation of his usual self on Saturday) failed with a pass to Ousmane Dembele in the Madrid penalty box — it was a big chance missed. But the reigning champions didn’t waste a split second breathing a sigh of relief. They broke from their own box, via Vinicius’ superb probing run, and when the move became a double V and he fed Valverde, the Uruguayan found himself in the opposite penalty area crashing a shot into Ter Stegen’s right hand post with the German comprehensively beaten.

Here are the top 100 players and managers in men’s soccer, as rated by our experts.

If Benzema’s goal and Valverde’s missed chance were beautiful exhibitions of how to make a manager’s idea punchy and effective, Madrid’s second goal was the complete antithesis. Well, at least, from Barcelona’s point of view.

Constructing walls has been a controversial subject in recent years, and football teams have been so paranoid about the tricksters who shoot at goal from dead ball situations that most sides now lay a “blocking” man behind a well-formed barrier so that no ground-based daisy-cutter can sneak under the wall’s jump and flummox the goalkeeper. You know the tactic.

I mention this because it tells you how intricately 99.9% of teams prepare to defend situations where they are at high risk of conceding.

What makes the events surrounding Madrid’s second goal even more astonishing is that Barcelona had a library full of evidence from midweek, when Liverpool showed them what NOT to do, about how damn dangerous Toni Kroos is if you give him time and space.

Against Liverpool, the outstanding German brutally gave his team control of the game with two wonderful quarterback passes which brought goals.

In the end analysis here, even if you consider Messi’s Barnum and Bailey “Roll up, roll up…” showman attempt to beat Thibaut Courtois direct from a corner only to see the ball hit the bar, and even if you lump in Ilaix Moriba‘s crashing volley off Madrid’s crossbar in the frantic final seconds, there’s no getting away from the fact that it was this infantile failure from Barcelona in the 27th minute which gave Madrid the match, gave them the head to head advantage, gave them a very strong chance of the title and exposed something which is a fundamental Achilles heel for a coach like Ronald Koeman.

As Kroos lined up to take the free kick won when the referee reckoned that Vinicius’ daring run was stopped by Araujo’s foul — very much a 50/50 decision I thought — the German must have thought that Barcelona’s wall was a spoof. That this was a practical joke of some kind.

When a player is about to shoot at goal from this distance, his teammates often shove and push and snarl to try and burrow a hole in the opposition wall through which he can shoot. It often gets nasty. Pushing, shoving, accusations, stamping on toes, referees brandish cards and perhaps even a sending off. All kinds of everything.

Not here. If this had been a Road Runner and Wile E. Coyote cartoon, there would have been a big Acme sign pointing to where the danger lay saying: “Shoot here!”

The arrow would have pointed to the huge gap between 21-year-old Oscar Mingueza playing his first Clasico and 20-year-old Sergino Dest, playing his second. I swear, looking at Kroos’ face, he had a little cackle of joy when he realised that this wasn’t a practical joke.

The German struck it viciously and, to compound the jaw dropping amount of space he’d been offered, Dest turned his back (a capital sin) and the ball deflected in off the young USMNT player.

When Barcelona last fluffed trophy chance, it was conceding from a free kick late on against Athletic Bilbao in the Supercup final. Griezmann said then that they were vulnerable to not defending in a sufficiently prepared, communicative way.

Not practicing how to defend them, not repeatedly working on drills until it becomes a defensive art. No, oh, no.

Just try not to concede corners and free kicks near the box. Stellar advice. Until it fails — after which Barcelona are undressed by well organised, well planned set plays which their opponents treat as vital opportunities.

After the match, long after Messi and Alba (free of Valverde’s shackles because he was exhausted) combined down the left to create Mingueza’s goal, and long after the second half offered us a cornucopia of thrills, spills and they joy of football played at full tilt, Koeman moaned about the referee.

He spared not a thought for the fact that Gil Manzano booked Nacho and red carded Casemiro (just the second sending off of his career), nor that both of them will now miss next week’s Getafe match where it’s certain that Sergio Ramos (and perhaps even Dani Carvajal and Raphael Varane) will also be out.

But Koeman’s bitter complaint that Manzano should have awarded Martin Braithwaite a late penalty for a supposed tug by Ferland Mendy was built on very shaky foundations. Just like the defensive wall which cost Barcelona defeat.

In the end, like the Everly Brothers, Koeman had to do his crying in the rain. But Madrid noticed, even through their triumphant embraces, their jigs of joy — they could distinguish driving rain from salty tears.

The rest of us? We breathed out and beamed after 90 minutes of magic and madness.