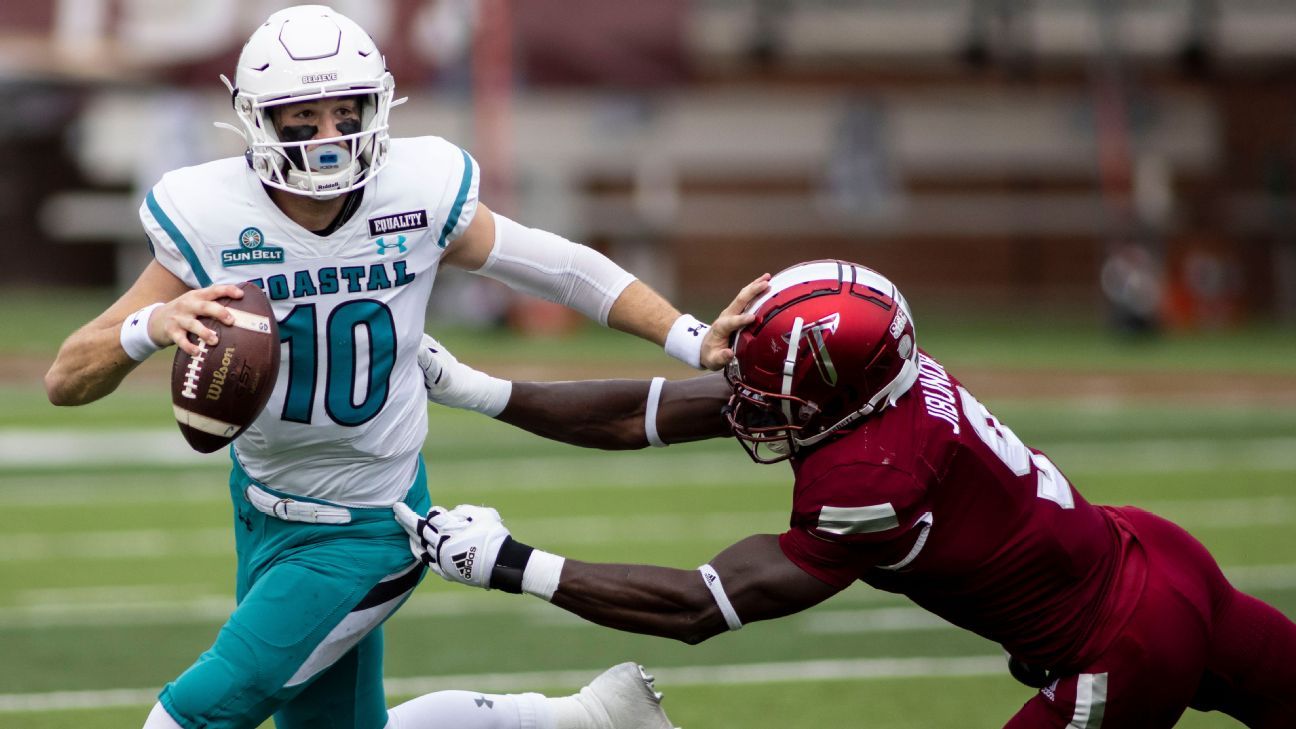 According to SP+, the worst team in the Sun Belt East — in this case, Georgia Southern — would be the best team in the West. That tells you most of what you need to know about the current balance of power in #FunBelt country.

Thanks both to the top-20 potential of Coastal Carolina and App State and the top-75 or so potential of everyone else, the East grades out as the single best division in the Group of Five heading into 2021. App State has finished in the SP+ top 30 for three straight seasons, and Coastal Carolina surpassed the Mountaineers with a rousing breakthrough last season. Both teams bring back almost everyone … as do the three other teams in the division. No off weeks here.

Every week through the summer, Bill Connelly will preview another division from the Group of 5 and Power 5 exclusively for ESPN+, ultimately including all 130 FBS teams. The previews will include 2020 breakdowns, 2021 previews and a brief history of each team in one handy chart. The series has thus far covered the Conference USA East and West, the MAC East and West, the MWC Mountain and West and the Sun Belt West.

In 2017, Chad Lunsford took over an 0-6 team that would eventually go 2-10. He has since taken the Eagles to three consecutive bowls. A rough schedule could make four straight tricky.

* Likely wins are games in which SP+ projects the scoring margin to be greater than seven points, or above about 65% win probability. Likely losses are the opposite, and relative tossups are all the games in between.

Drawing BYU and Arkansas in non-conference, plus Louisiana in cross-division play, creates one of the toughest schedules in the Sun Belt.

The Eagles can play D! GS ranked 109th in defensive SP+ in 2017. Since Scot Sloan took over as coordinator in 2018, they have improved to 92nd, then 64th, then 46th. Last year’s defense combined negative run plays, active DBs and red zone disruption. Corners Derrick Canteen and Darrell Baker Jr. combined for 25 passes defensed, and GS led the nation in interceptions.

GS loses its most disruptive lineman (DE Raymond Johnson III) and two most disruptive linebackers. In a year in which seemingly everyone brings everybody back, that’s noteworthy. But Canteen, Baker and safeties Anthony Wilson and Justin Birdsong return, as does an excellent blitzer in Benz Josue.

Whether they have a quarterback. Longtime starter Shai Werts transferred to Louisville for his bonus eligibility year. He led an accurate stereotype of an option offense: efficient rushing mixed with inefficient passing and random bombs. The new starter will inherit an almost error-free line that returns four starters, plus last year’s top three running backs and Tulane transfer Amare Jones. When he looks deep, he’ll have at least one semi-proven option in slot man Khaleb Hood.

Who will that QB be? TBD. Last year’s backup, Justin Tomlin, can fulfill run duties but threw three picks in 25 passes. Georgia Tech transfer James Graham and redshirt freshman Sam Kenerson both look the part, but the résumés are light. The potential seems high, but Werts was a security blanket.

Georgia Southern’s history in one chart

With a freshman quarterback and almost no seniors, GSU nearly upset both Louisiana and Appalachian State and scored its second bowl win of the four-year Shawn Elliott era.

This team is experienced and dangerous, but a brutal road slate could keep the win total tamped down.

Brown-to-Pinckney is big-time. Cornelious Brown IV threw more interceptions than you’d prefer, but he was a redshirt freshman, and he likes to look downfield. You can’t blame him — he’s got a great downfield option in Sam Pinckney (47 passes for 815 yards). Pinckney and Cornelius McCoy comprise one of the Sun Belt’s better receiving tandems.

The defense rounded into form. After allowing 40 points per game and 6.1 yards per play in their first six games (record: 3-3, with a 59-52 loss to Arkansas State), the Panthers allowed 19 and 4.8, respectively, from there and finished winning three of four.

While the run defense had been sturdy all year — it should be again, with every lineman and ILB Blake Carroll back — the secondary surged. Corners Jaylon Jones and Quavian White finished with 22 passes defensed, and edge rusher Jordan Strachan had 10.5 sacks, 5.5 in the last four games.

The secondary returns intact, but Strachan transferred to South Carolina. Quite a few backups generated strong pressure numbers in small samples, but the bar’s high.

Whether the run game will improve. The Panthers ran the ball on 68% of standard downs (18th nationally) but weren’t good at it — 77th in rushing success rate, 93rd in stuff rate. Running so much created lots of passing downs for their young QB.

A seasoned line led by guard Shamarious Gilmore should do its job, but Brown and backs Destin Coates and Tucker Gregg could stand to follow their blocks better. The wildcard in the backfield: former South Carolina DB Jamyest Williams, who moved to RB and gave the offense a late-season spark.

Georgia State’s history in one chart

Competitive but frustrating, Troy suffered a run of close losses to finish with five wins for the second straight year under Chip Lindsay.

The Trojans are experienced, and they’re projected favorites in seven of their first nine games. That could be a friendly combination.

What we learned about Troy in 2020

They were close to so much more. As they say, history is told by the victors. Coastal Carolina and Louisiana enjoyed 2020 breakthroughs both because they were excellent and because they went a combined 8-1 in one-score finishes (not including their three-point game against each other).

Troy, meanwhile, went 1-4 in such games. Four of the Trojans’ five wins came by an average of 27.5 points, and four of their five conference losses came by an average of 4. That’s a good way to get SP+ to like you more than your record suggests it should. (They were 72nd.) It’s also a good way to become a bounce-back candidate the next season, especially when you return 21 starters.

How much big-play potential the offense has. Troy jumped from 112th to 68th in defensive SP+ thanks to a healthy combination of run support and big-play prevention. The Trojans were a bit passive against the pass but tackled well and got off the field on third-and-long. With every starter back and four power-conference transfers aboard, it could potentially improve further.

The offense slid from 40th to 70th. Due to injury and turnover, freshmen and sophomores started at QB (Gunnar Watson), RB (Kimani Vidal) and three of five spots on the line. A quick-release passing game provided efficiency, but the run game didn’t, and there weren’t enough big plays.

Adding FSU transfer La’Damian Webb could help in the explosiveness category, but if it doesn’t, the upside here could be limited even if experience levels are not.

Troy’s history in one chart

With about 20 starters back and no sure losses on the schedule, Jamey Chadwell’s Chanticleers will have an excellent shot at another big run.

What we learned about Coastal in 2020

Good football can be fun. With a fun, option-based attack, the Chants were able to score via either big pass play or a grinding, seven-minute slog. The defense prevented big plays, then hit your quarterback in blitz situations. They played on a teal field. They played BYU on three days’ notice. They had a turnover cloak. They got creative with their post-win celebrations

Grayson McCall is outstanding. The Chants were competitive in both 2018-19 and brought back quite a bit of experience, but newcomers provided an extra gear. Linebackers Jeffrey Gunter (an NC State transfer) and Enock Makonzo (juco) combined for 16 tackles for loss and 8.5 sacks, corner D’Jordan Strong (juco) led the team with 12 passes defensed and left guard Willie Lampkin (true freshman) was second-team all-conference. They’re all back.

Then there was McCall. The redshirt freshman quarterback executed all the proper aspects of the option attack, averaging 6.2 yards per non-sack carry, but he could also make a lot of throws and delivered deep balls aplenty. This efficiency offense had pop, and while leading rusher CJ Marable is gone, every starting lineman and every deep threat (Jaivon Heiligh, tight end Isaiah Likely, etc.) are back. McCall’s got everything he needs.

What we didn’t learn about Coastal in 2020

Whether the run defense can become less of a liability. Coastal’s kryptonite was a good run game — the Chants ranked 87th in rushing success rate allowed and gave up over 6 yards per carry to Louisiana, BYU and Liberty. Everyone but end Tarron Jackson returns, including play-making tackle C.J. Brewer up front. But experience alone doesn’t necessarily fix the run defense.

Coastal Carolina’s history in one chart

Road trips to Miami, Louisiana and Troy could prevent a run at 12 wins, but 2020 could still be outstanding if a new QB sticks.

What we learned about App State in 2020

Even four-time defending champs can glitch. Two red zone turnovers against Marshall, three bad minutes against Coastal and a missed chip-shot field goal. That’s what separated the Mountaineers from a perfect record. Louisiana and Coastal Carolina justifiably stole all sorts of headlines in 2020, but App State came within just a few bounces of remaining atop the heap.

The run game still hums. The trio of Camerun Peoples, Daetrich Harrington and Nate Noel combined for 356 carries, 2,229 yards and 22 TDs, and App State ranked 18th in rushing success rate. With star wideout Corey Sutton opting out, they lacked a little in the explosiveness category, but Sutton and all of 2020’s wideouts are back, as are all three RBs.

So does the pass defense. App State ranked first in passing success rate allowed and fourth in passer rating allowed. The run defense was merely fine, but the pass rush was good and the secondary was otherworldly. Corner Shemar Jean-Charles led the country in passes defensed, and App allowed a 48% completion rate with 15 INTs. Now 10 defensive starters return.

What we didn’t learn about App State in 2020

How much of the pass defense was due to Jean-Charles? He’s gone, but everyone else returns, including safeties Kaiden Smith and Ryan Huff and disruptive front-seven guys in end Demetrius Taylor and linebacker D’Marco Jackson.

Is there a smooth transition at QB? Three-year starting quarterback Zac Thomas is gone, as are last year’s backups. The starting job will be Clemson/Duke transfer Chase Brice‘s to lose. He struggled captaining a mostly hopeless Duke ship last fall; can he find a groove in a far more positive situation?

App State’s history in one chart