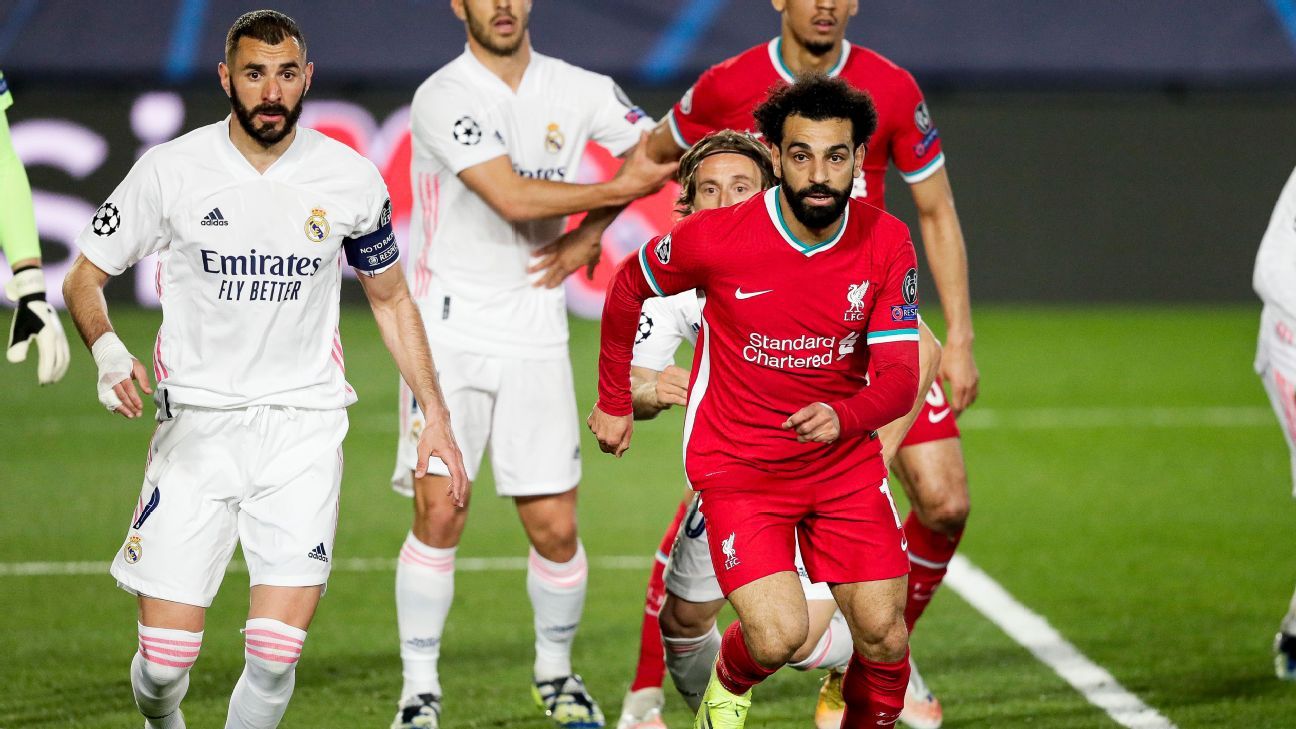 The only time Zinedine Zidane imposed his majesty on the hallowed turf of Anfield, he scored a shoot-out penalty to escape a dogged rival and reach the semifinal. It was a narrative, and end result, he’d embrace with all his natural ebullience were it to come his way again on Wednesday night.

Of course, the defeated rival wasn’t Liverpool, as it will require to be if Real Madrid are to face (I’m pretty certain) Chelsea in the Champions League semifinal two weeks from now. The Zizou of that day was wearing the blue of Les Bleus at Euro ’96 in England.

He hadn’t won the World Cup or the Champions League by that night, June 22, 1996; in fact, unless you value the Intertoto Cup (remember that?), Zidane hadn’t actually lifted a single senior trophy. His planned move from Bordeaux to Barcelona — Johan Cruyff had lined it up before scrapping it because he intuited, correctly, that he was going to be sacked — turned into a move to Juventus, and Zidane’s Anfield adventure was helping France eliminate Guus Hiddink’s troubled Dutch national team.

Now here he is, back at Anfield Road, Liverpool L4 0TH, where England’s reigning champions play their matches, and where the world-famous sign at the beginning of the tunnel to the pitch states, in evocation of the glorious red-and-white history at their stadium, This Is Anfield.

But, I’d suggest, by that standard Zidane should have a kind of plaque-on-a-chain around his neck and hanging down to chest level that simply says This Is Zizou.

– Hunter: How Madrid got the better of Barcelona
– Klopp: Liverpool have nothing to lose
– Stream ESPN FC Daily on ESPN+ (U.S. only)

In the quarter of a century that’s passed before his return to Anfield as a chief protagonist, Zidane has done it all, ascending to become far more than simply the Ballon D’Or, World Cup-winning superstar hat being a football player made him. As a coach, it’s begun to seem that he can drift in and out of employment — at Madrid, at least — and recommence winning at will. Not the worst tendency you can have when you’re in charge of a football squad, especially an elite one.

The reason that he missed being a presence in Carlo Ancelotti’s dugout the last time Los Blancos visited the Reds was that Zidane, having been a Champions League-winning assistant coach to Ancelotti the previous season (2013-14), had assumed control of Real Madrid Castilla, their youth team — a path that, not many months later, would see him replace Rafa Benitez in midseason and, in football terms, proceed to turn water into wine.

Madrid’s last Anfield trip, nearly seven years ago, helps explain a great deal about the central theme for this week’s quarterfinal, second leg. As Jurgen Klopp explained on Tuesday, “when you are 3-1 down, it looks like we are already out, it means we have not a lot to lose. We will give it a try, that’s the job we have to do. That’s how we will go for it.”

Back then, in Oct. 2014, Carlo Ancelotti’s Champions League holders gave Liverpool a bit of a roughing-up, winning 3-1 in front of the Kop. It’s remarkable to consider that not a single Liverpool player from that night will be involved this week and of the 19 Reds who suited up for action back then, only one, Jordan Henderson, is still at the club. In comparison, eight of the Madrid players who either featured in the match or were in the dugout, are not only still key footballers for Los Blancos, but a good few (Nacho, Toni Kroos, Luka Modric, Karim Benzema) will start while Dani Carvajal and Raphael Varane, if available, would also have been in the XI.

Here are the top 100 players and managers in men’s soccer, as rated by our experts.

Kudos to those who selected so well for Real Madrid that in an age increasingly dominated by buying solutions, and at the world’s number one Galactico club, eight footballers are still doing it (and are reigning Spanish champions) seven seasons on from the last contest with Liverpool who, themselves, no longer rely on Glen Johnson, Lazar Markovic, Rickie Lambert, Joe Allen or Simon Mignolet. But for every action there’s an equal and opposite reaction, or so they say.

The above stat is impressive; it speaks volumes about Madrid’s quality of selection and recruitment. It tells a great deal about these players ability to keep on reinventing themselves, too, to stay hungry when the years between then and now have absolutely sated them with salaries and trophies. The brutal mentality of real winners. Yet Kroos, Nacho, Benzema and Modric are 30, 31, 33 and 35 years old respectively. The two others who might feature, Isco and Marcelo, are about to turn 29 and 33.

During those seven years of perpetual success, this elite group of winners have racked up several hundred matches, all played under the immense physiological and psychological stress of “we’re Real Madrid, we have to win, entertain, impose upon and humble others.” All of which, combined, help explain what looks and feels like an unfortunately frank remark from Zidane’s following Saturday’s 2-1 Clasico win over Barcelona.

“We need rest,” said Zidane. “The last two matches have been really hard work. “I really don’t know in what state we are going to be towards the end of this season because, physically, we are teetering on our absolute limits.”

It may not have been the most streetwise admission, but it’s a tendency of Zidane’s to address, head-on, any fair question that’s put to him — something about which I’ll yield to no-one in admiring as a hugely likable quality. Nevertheless it’s a theme that’s been a bit sticky and “unfortunate” for him once before.

Steve Nicol and Don Hutchison discuss how Liverpool should approach the second leg vs. Real Madrid.

Only once in the history of this competition have Madrid led by two, or more, goals after the first leg of a knockout tie and still been eliminated. Theoretically, it’s a hugely daunting stat for England’s champions to digest before trying to go out and overturn a two-goal deficit at home.

It happened against Monaco back in 2004, and after their 4-2 win over Didier Deschamps’ team at the Santiago Bernabeu, physical exhaustion was a second enemy alongside having to face quality like Patrice Evra, Jerome Rothen, Fernando Morientes, Emmanuel Adebayor and Ludovic Giuly. Raul and (original) Ronaldo combined to make the aggregate 5-2 to Madrid quite early in the Monte Carlo match, but after Giuly equalised on the night late in the first half, he walked off with his France teammate, Zidane, and joked “right, that’s got us some dignity back… go easy on us in the second half.”

Zizou apparently looked at Giuly askance and said: “Mate, can’t you see that we’re absolutely exhausted?” The little winger told his teammates, Monaco won the second half 2-0 for a 3-1 win on the night; the aggregate score was 5-5 and Monaco advanced on away goals.

It wasn’t Zidane’s fault, nor will his admission after the 2-1 win over Barcelona in a howling, rain-lashed gale that they were physically run-down be enough to knock them out at Anfield, either. However, if you thrown in the absence of Sergio Ramos, Varane, first-choice right-back Carvajal and his superb back-up, Lucas Vazquez, then it’s a heady cocktail of problems to take into the lion’s den.

Perhaps Fede Valverde takes a pain-killing injection and plays at right midfield to protect whoever fills the Carvajal/Lucas position; perhaps the Uruguayan actually plays in that position himself, or Zidane risks putting Ferland Mendy at right back and Marcelo in the starting XI for a change. He has choices. He also has proven match-winners in Benzema, Vinicius Jr. and, above all, Modric and Kroos. Having said all that, there’s another comparison from Zidane’s own career that helps illustrate what lies in front of Spain‘s champions and a result that would take them to their first Champions League semifinal since 2018.

Back in 2006 at the World Cup in Germany, Zidane was the stellar player who dragged an aging and patently tired France side through test after test until they made the final in Berlin against Marcello Lippi’s Italy. He put Les Bleus 1-0 up with his Panenka-style penalty to join an extremely elite band of players — there are only three others, see whether you can name them — who’ve scored in two men’s World Cup finals. But, of course, it’s a match remembered for Zidane’s dogged unwillingness to stare at the World Cup trophy as he stomped past it, having been sent off that day.

I was in the Olympiastadion that afternoon and when Italy’s Marco Materazzi said whatever it was that insulted and angered Zidane sufficiently for him to lose his temper. there was an interesting moment.

As play surged away up the other end of the pitch, Zidane’s legs took him away from Materazzi for a second or two, but the brain wasn’t willing. The athlete was doing one thing, the man, and his tired, wounded psychology another. The flesh was willing, but the mind was weak, as amateur psychologists say. Fatigue allowed anger to win, being utterly frazzled dominated what the elite athlete had been trained to do, and Zidane’s head-butt into Materazzi’s chest ended both France’s realistic chances of winning the match, and ended his playing career on an infamous note.

I’m not suggesting there’ll be any such provocation, ire or controversy at Anfield. But if Liverpool dial-up their intensity, their pressing and their sporting aggression from the first leg, we are, by Zidane’s own admission, entering a phase when his run-down, beaten-up and physically frazzled team might be caught in many a dilemma where their legs and lungs are telling them one thing and their exhausted, overwhelmed minds something else altogether.

This week’s game at Anfield isn’t simply a battle between Liverpool and Real Madrid, or Klopp and Zidane, but between the Spanish champions’ innate hunger to win, as they inch move irresistibly towards the chance of winning this magnificent competition for the 14th time, and their screaming, jangling exhaustion telling them “no more, please… no more.”