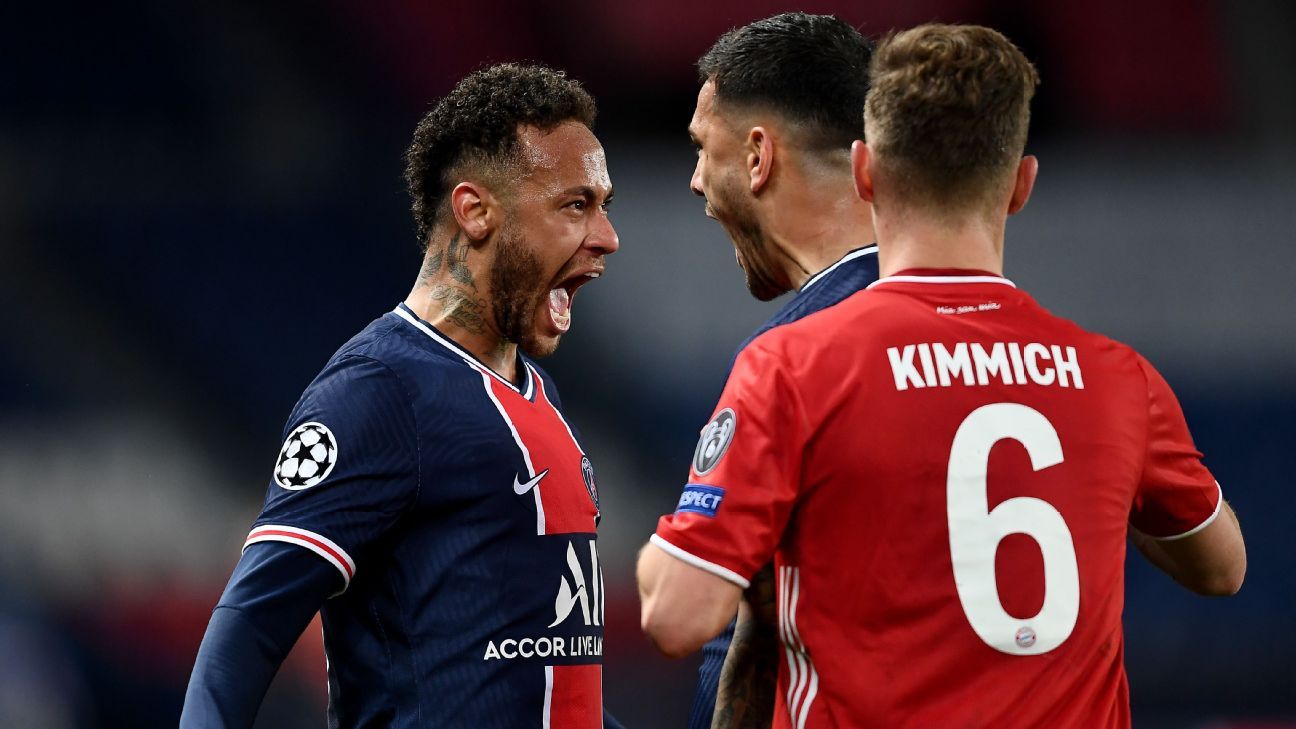 On the big rectangle table placed in the middle of the home dressing room at the Parc des Princes, Kylian Mbappe and Presnel Kimpembe are jumping as much as they can. Water is thrown on them, Sergio Rico joins them, as does Idrissa Gueye and Rafinha. Other players and members of staff are hitting the table in rhythm while chanting: “We are in the semis! We are, we are, we are in the semis!”

Marquinhos, in his immaculate white hoodie, is there too. He was out injured and missed Tuesday’s 1-0 loss to Bayern Munich — a result good enough to see Paris Saint-Germain progress to the next stage of the Champions League on away goals — but we could hear his voice from the stands, encouraging his teammates.

Leandro Paredes, one of the leaders of this squad, keeps shouting “Vamos! Vamos!” every time he hugs a teammate. Nasser al-Khelaifi, the PSG president, has welcomed every player back in the dressing room and then is congratulating each and anyone of them a second time by going around the place, like Leonardo, the sporting director.

Manager Mauricio Pochettino has to leave to do all his post-match media duties, but the huge smile on his face says it all. This is a happy dressing room — a very happy dressing room. PSG are in the Champions League semifinals for the second season in a row, and are slowly but surely cementing their place among the top European clubs and perennial Champions League contenders.

This time, they got there the right way; over two legs, beating Lionel Messi first and now Bayern, the World and European Champions. Each time, it was a real battle, a nail-biting scenario. But in both ties, what prevailed was Paris Saint-Germain’s spirit and solidarity.

Of course, Kylian Mbappe and Keylor Navas were the heroes of the two games against Barcelona and the one in Munich. Remarkably, the Costa Rica keeper is yet to lose a two-legged Champions League tie he has played in. And Neymar, voted man of the match on Tuesday, was once again the star of the show, even if he should have taken at least one of the chances he created.

Paris went through, however, because they played as a team first and foremost. This is the message Pochettino has been telling his players since day one: We can have great individuals like Neymar, Mbappe or Angel Di Maria, but we can only go far if do this all together, otherwise it won’t be possible.

At half-time of the first leg, when Bayern was dominating the game, he told his men to stay calm and that they would score again and win. It happened. On Tuesday, Pochettino told them that they would be able to cope with the pressure in the second half after Bayern took the lead just before the break. And they did.

This PSG team won because they have become a definition of mental and collective strengths, with special talents within the group.

Of course, they benefited from all the players Bayern were missing (Robert Lewandowski, Serge Gnabry, Leon Goretzka), but the Parisians had problems too. They didn’t have Marco Verratti or Alessandro Florenzi for either game, while Marquinhos only lasted 30 minutes in the first leg and is now out until the semifinal first leg. Paredes, who Pochettino has turned into such a key part of the team, was suspended for the game last week.

Paris had their issues, but they rose above them to make sure that their Champions League adventure continued. Before this second leg, Joshua Kimmich — arguably the best No. 6 in the world — said that he was “convinced Bayern would go through, because they are the best team in the world.”

Let’s just say that these comments didn’t go unnoticed, especially by Neymar who used them as extra motivation.

And when Daniele Orsato, who was the referee in the Champions League final PSG lost against the Germans eight months ago, blew his whistle for the final time on Tuesday night at the Parc des Princes, the Brazilian superstar celebrated with Paredes almost in Kimmich’s face — a scenario that Neymar said was down to fate.

“It’s funny because I didn’t even celebrate to mess with him, it was more with Leo, and I ended up celebrating with him. It was fate that put me close to [Kimmich],” Neymar said after the match.

There was an element of revenge on Tuesday night even if no payers really said it that way. The demons of the 2017 Remontada against Barcelona have now gone after the last 16 of this season. The ghosts of the 2020 final against Bayern have now gone as well. Earlier this season, the team also sent packing the bad memories against Manchester United from 2019 by winning at Old Trafford.

It has been a season of Champions League retribution for Paris and now there is no stopping them, even if Pochettino insists that they are not the favourites to win it.