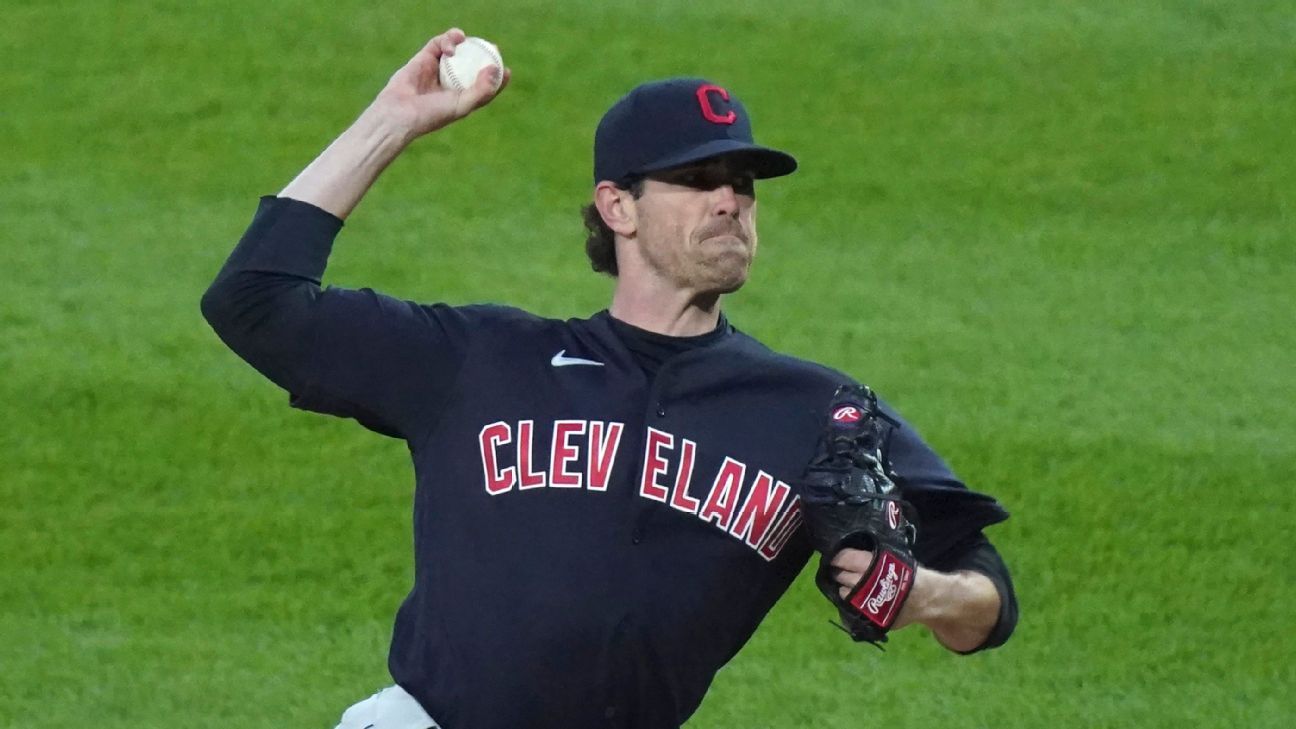 We can call Tuesday night the “Night of the 11 Aces,” which might refer to the time Uncle Bob won all the money at family poker night, but on this evening refers to the unusual gift of seeing 11 legitimate preseason Cy Young candidates all starting.

The marquee matchup was the American League Central showdown between the Indians‘ Shane Bieber and the White Sox‘s Lucas Giolito in Chicago, and it lived up to expectations in what will be one of the best duels we’ll see all season. Maybe the best we’ll see.

Both pitchers took a shutout into the eighth inning, Bieber went nine, and the game was scoreless heading into extra innings. Cleveland finally scratched two runs in the top of the 10th inning, and Bieber got the win when Josh Naylor caught Jake Lamb’s potential tying home run just in front of the fence in right field.

Both pitchers were in complete control throughout — and showed you don’t have to throw 98 mph to dominate in the majors. Bieber works extremely fast, which always makes his games enjoyable to watch, but it’s his combination of throwing strikes with great movement that makes him so tough. He was amazingly efficient in this game: Through eight innings he had thrown just 86 pitches, a remarkable 67 for strikes, taking advantage of the hyper-aggressive Chicago lineup.

The Sox finally made him work in the ninth inning as he threw 27 pitches, but with two on he fanned Yoan Moncada on four pitches — four curveballs — and pumped his fist as he walked off the mound.

With that outing, Bieber wins Ace of the Night. Let’s do a quick review of all 11 starters:

After striking out 12 in each of his first two starts of 2021, Bieber became just the sixth pitcher since 1901 to begin a season with three straight games of 10 or more strikeouts, joining Gerrit Cole (2018), Rich Hill (2015), Randy Johnson (2000), Nolan Ryan (1973) and Sam McDowell (1970). His fastest pitch of the night was 94.3 mph, just the 37th-fastest pitch of the game. That’s plenty fast enough, but he does it easily, without ever overthrowing. He actually threw more curveballs (46) than fastballs (39) and does a great job of mixing his first pitch to a batter: 12 fastballs, 10 curves, 8 sliders, 1 changeup. Despite throwing so many first-pitch offspeed pitches, he still threw them for strikes — 24 of 31 batters faced. Beautiful.

Giolito picked up the hard-luck no decision, despite pitching into the top of the eighth (he was removed after walking the leadoff batter in the inning). His fastest pitch of the game was 94.2 mph, but he did a good job of adding and subtracting on his fastball — he’s not afraid to throw 92 at the top of the zone, trying to get the opponent to chase. His short arm action adds deception to his delivery, and he’s pitching with supreme confidence. This was his best outing of his three starts, and with 26 strikeouts in 17.2 innings, he looks like he’s also on his way to a huge strikeout season.

The most underrated pitcher in the majors? Ryu finished second in the 2019 National League Cy Young vote and third in the 2020 AL vote and has a 2.30 ERA going back to 2018 — yet I don’t think anybody predicted he will win in 2021. No, he doesn’t own the blazing fastball of Cole, but man does he know he know how to pitch. Four of his seven K’s came on pitches that were outside the strike zone, the one run he allowed was unearned, and he threw 68 of 95 pitches for strikes.

Bauer was greater than a -300 favorite on the moneyline at home against a Rockies team that struggles to score runs away from Coors Field, probably one of the surer bets of the season — and he didn’t disappoint. After taking a no-hitter into the seventh against the Rockies in his first start of the season, the only hit allowed in the first five innings was a swinging bat. He did walk the first two batters in the second, but he escaped with two strikeouts and a popout. Good outing, but the game we’re looking forward to is Sunday: Bauer against Blake Snell and the Padres (see below).

Woodruff was my favorite off-the-board Cy Young candidate entering the season, and he has done nothing to suggest he can’t finish high in the voting. He throws strikes, has a good defense behind him and will get to face the Cubs five or six times.

Woodruff’s fastball topped out at 98.4 mph in this game, and he threw 24 pitches at 97 mph or faster. Fifty-eight of his 95 pitches were fastballs, but what makes him so tough is his curveball and changeup are both plus offerings. He left with a 2-1 lead, but the Brewers’ bullpen blew it and Woodruff remains 0-0 in three starts despite a 2.12 ERA. Something to watch the next time Woodruff faces the Cubs. After Woodruff hit Willson Contreras (the Brewers have now hit him seven times going back to last season), the Cubs threw behind Woodruff. The Cubs are “protecting” their teammate, but Contreras practically leans over the plate asking to be hit. Here’s Ryan Tepera’s pitch:

Matched up against Stephen Strasburg, Flaherty was … fine. He wasn’t efficient at all, throwing first-pitch strikes to just six of the 19 batters he faced and throwing 96 pitches, which is why he lasted just five innings. He got away falling behind hitters in this game, but that’s not a path to success. Really, Flaherty is still trying to find his form from the second half of 2019, when he had one of the best stretches in MLB history. He walked six over 10 1/3 innings in his first two starts of 2021, so while he was walk free in this game, the sharp command is not there yet.

I had this game on my big screen, and he probably deserved a little better result. Nola is fun to watch, and Mets announcer Ron Darling made a comparison I hadn’t thought of before, suggesting Nola reminds him of Dennis Eckersley, with the three-quarters arm action and flair in the delivery. Anyway, Nola was cruising into the fourth when the Mets’ Jeff McNeil started a three-run rally with one out on a half-swing infield dribbler. Kevin Pillar was jammed but hit a bloop single to center. Jonathan Villar hit a soft fly ball into right-center for a hustle double. Nola hit Tomas Nido to load the bases, and after Marcus Stroman struck out, Brandon Nimmo singled to right field, the one hard-hit ball of the inning.

I still view Nola as a sleeper Cy Young candidate (in a league without Jacob deGrom), although his park and defense works against him. Kudos to Stroman, who wasn’t one of our 11 aces, but had one of the best outings of the night with six shutout innings as the Mets won 4-0 to sweep the doubleheader.

Castillo versus the red-hot Kevin Gausman looked great on paper, but both starters surrendered two home runs and combined to allow nine runs (granted, a 19-mph wind out to center field didn’t help). Castillo had that terrible Opening Day start against the Cardinals (10 runs), followed up with seven scoreless innings against the Pirates, and now this effort, so he’s still looking for that consistency. Batters are hitting .600 against his two-seamer so far, so … maybe more four-seamers to go with his lethal changeup?

Fifth in the Cy Young voting in 2020, Fried has struggled to find the same command in 2021 and has now allowed 23 hits in 11 innings in three winless outings. He allowed two home runs in this start, as many as he allowed in 56 innings last season. Fried allowed five balls in play — four of them hits — of 100-plus mph, plus another hit at 99.7 mph and four others at 95 mph, the threshold of a hard-hit ball. His single-game high last season was four balls of 100 and just six of 95-plus. In other words, the Marlins pounded him.

Stephen Strasburg rubs his shoulder in the dugout as he struggles vs. the Cardinals.

I had this game on the iPad and every time I glanced down somebody on the Cardinals was rounding the bases. Paul Goldschmidt, Nolan Arenado and the struggling Matt Carpenter all homered off Strasburg, who via Game Score had the second-worst start of his career. He walked five batters for the just the second time in 243 career starts and allowed three home runs for just the sixth time. The biggest concern: He averaged just 90.7 mph on his fastball, the lowest of his career by a full mph. He had pitched six scoreless innings in his first start of 2021, so maybe this was just one of those nights like he’s never had before. But a lot will be made of the drop in velocity.

The 2018 Cy Young winner had pitched well in his first two starts with the Padres, but pitched just 0.2 innings as manager Jayce Tingler played it safe, including removing him one out shy of a potential win in his first start — which Snell wasn’t too happy about. This start was a complete disaster. Snell actually retired the first two batters on eight pitches, but the next six batters reached, including two walks and a hit batter. Really, Tingler had no choice. The most pitches in an inning this season is 40 and Snell’s career high is 42. You don’t want to leave him in and see a long 10-pitch battle that has him approaching 50 pitches in one inning in a game in early April. Snell didn’t seem to agree, though:

Blake Snell was pulled after failing to make it out of the first inning: 3 hits, 3 ER, 2 walks.

Did not appear to be too happy about it. pic.twitter.com/3p5nGxMjIS

All in all, I’d give our aces about a C+. We had a memorable duel between Bieber and Giolito, but three of them were terrible. Hey, maybe all these guys will line up to pitch again on Sunday and we can do this all over again.