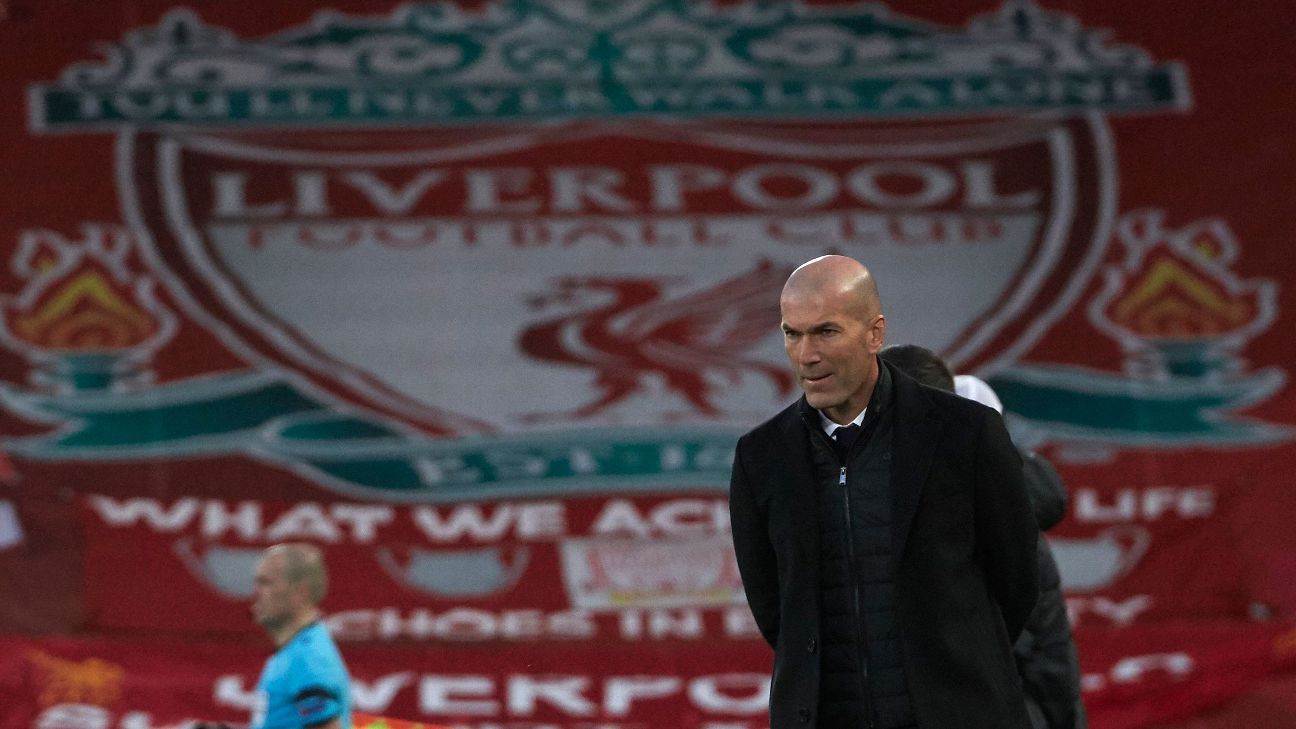 This may be the year that Zinedine Zidane finally earns full recognition for his achievements as Real Madrid coach because, if he guides this squad to Champions League glory following Wednesday’s 0-0 quarterfinal second-leg draw at Liverpool, it will be his finest triumph yet.

Real’s 3-1 victory in last week’s first-leg in Spain ultimately provided a comfortable cushion for the return fixture at Anfield and book a semifinal clash later this month with Chelsea. In front of empty stands once more due to the coronavirus pandemic, Zidane’s team stood firm against Liverpool’s attacking forays to edge one step closer to winning a record-extending 14th European Cup.

Liverpool created plenty of chances to win the game and the tie, but unlike their incredible 4-0 Anfield win against Barcelona in the 2019 semifinal, the ball did not roll for Jurgen Klopp’s team on this occasion.

Real, full of experience and know-how, simply held their nerve and got the job done. And that in itself is testament to the kind of qualities that this team possesses, such as durability, patience and tenacity, which tend not to be associated with Real Madrid.

When Zidane guided the club to three successive Champions League titles in 2016, 2017 and 2018, it was a team of glittering talents led by Cristiano Ronaldo and bolstered by Gareth Bale in his prime, with the defensive solidity of Pepe at the back. Toni Kroos, Luka Modric, Karim Benzema and Sergio Ramos were also part of Zidane’s hat-trick of Champions League successes when each was at the peak of their careers.

But when Zidane’s Real were eliminated at the Round of 16 stage by Manchester City last season, it seemed as though the club were set for a period of transition, with a new wave of players needing to bought and blooded to replace the old guard. That still needs to happen with Kroos, Modric, Benzema and Ramos all the wrong side of 30 years old, but despite the obvious decline of this Real team from its heights during the later years of the last decade, Zidane has somehow got them to a Champions League semifinal.

Liverpool, despite their domestic problems in a season when several key injuries have de-railed their Premier League title defence, remain a threat in Europe and Klopp’s team could have won this tie comfortably had they taken their second-leg chances. But Zidane and Real still came through the test and they will now believe that they can once again emerge as European champions this season.

They will hope to have captain Ramos fit and available for the tie against Chelsea, with the centre-half missing this tie due to injury before testing positive for COVID-19 and Raphael Varane, who missed both legs of this tie because of the virus, will also likely be back to face Thomas Tuchel’s side.

So Real go forward knowing that they will be stronger. But although Benzema continues to be a world-class centre-forward, with 20-year-old Vinicius Junior offering pace alongside the Frenchman, this Real team lacks the adventure and star quality of its predecessors. It is a more prosaic team, without an obvious clutch player, so Zidane must find a way to ensure that Real can overcome Chelsea before a final against either City or Paris Saint-Germain.

And that is the challenge which, if achieved, will elevate Zidane to a different level as a coach. It would also make him the first coach to win four European Cups, so history truly beckons for the 48-year-old.

Chelsea, with just two defeats in 18 games under Tuchel, will not fear this Real team, but their dismantling of Liverpool in the first-leg will serve as a warning to the Stamford Bridge side. Liverpool allowed Kroos far too much time and space to cause havoc with his passing and they were caught out by the pace of Vinicius.

But Real’s shortcomings at the back were also exposed by Liverpool in both legs and it required a commanding second-half performance by former Chelsea goalkeeper Thibaut Courtois to keep Liverpool at bay.

Zidane will be happy to be facing Chelsea in the next round rather than City or PSG, however. On present form, City and PSG would go into a tie against Real as favourites, but in a one-off game in the final in Istanbul, few would write Real off. When he guided Real to glory on those three previous occasions, Zidane knew he was in charge of the best team in Europe and they proved that each time.

This season, Real are one of the outsiders and it is an unfamiliar position for them to be in, which is why it will be all the more special, and significant, if Zidane can mastermind yet another Real Madrid Champions League triumph.