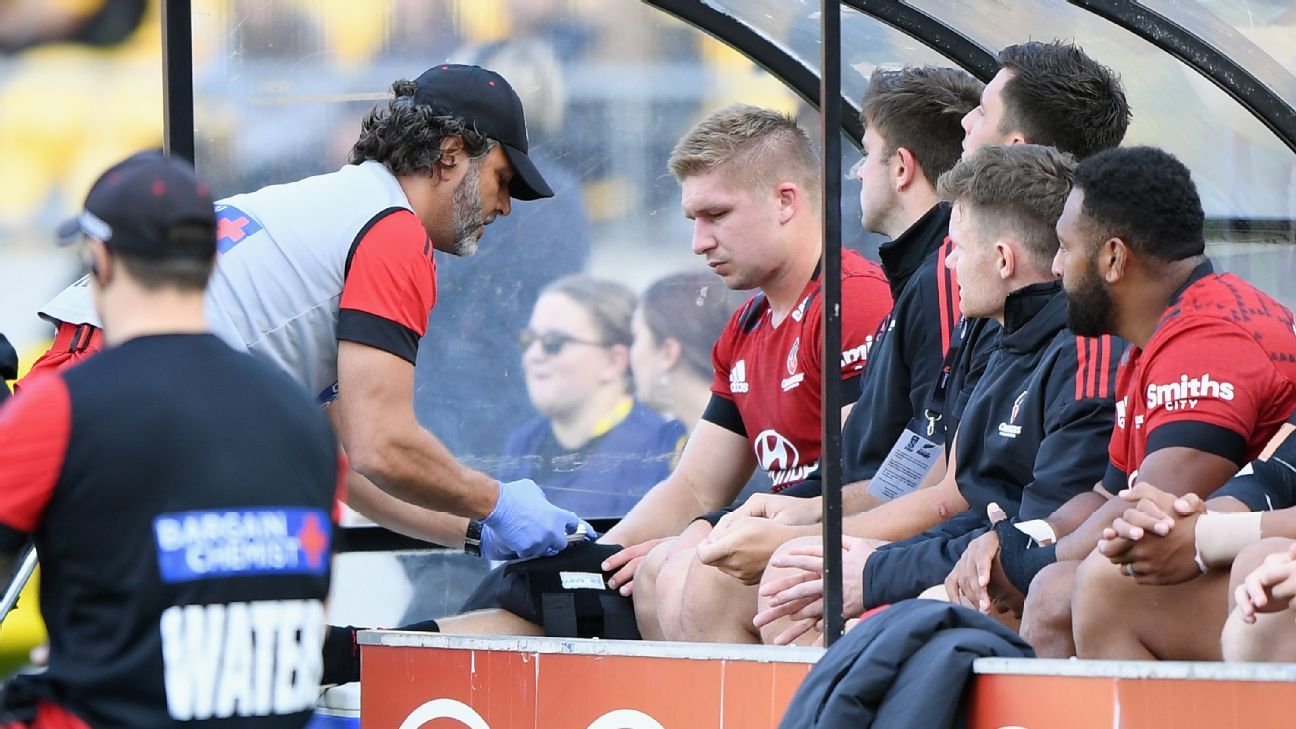 Jack Goodue and Joe Moody are the latest frontline All Blacks to suffer serious injuries as veteran scrum-half Aaron Smith says the Super Rugby Aotearoa season has “come home to roost” as more and more players are cut down.

Goodhue and Moody both left the field during the Crusaders’ 30-27 golden point victory over the Hurricanes on the weekend, the club confirming Thursday that the All Blacks centre would miss the remainder of the season with a torn ACL while Moody’s timeframe is less certain after he sustained a “significant injury to the soft tissues at the base of his big toe”.

The injuries are the latest in a string of concerns for All Blacks coach Ian Foster who has already seen skipper Sam Cane sidelined for between four and six months and star back-rower Ardie Savea rubbed out for eight weeks, while rising stars Folau Fakatava, Thomas Umaga-Jensen and Connor Garden-Bachop have also had their Super Rugby Aotearoa seasons brought to a close.

The high speed and intensity of the competition was evident last year and one of the reasons why New Zealand Rugby was keen to pursue a wider provincial competition for the region, for which another key step was taken on Wednesday with both Moana Pasifika and Fijian Drua given provisional approval to join a 12-team tournament – which will also include the five Super Rugby AU franchises – from next year.

But that won’t spare the All Blacks potentially further injury issues this season with three rounds of Super Rugby Aotearoa – and then a final – still to be contested.

And Smith, whose Highlanders head to Eden Park on Friday to face the Blues, has taken issue with this year’s draw, suggesting player welfare might not have been considered as thoroughly as it had been when it was created amid the pandemic last year.

“The games are brilliant, it’s just around byes and stuff; is there more chance to fit that in?” Smith said.

“I think the way the comp is looking for the future with other teams, Australia or Japan or the other ideas that are being thrown around.

“It’ll give us that great balance of what Super Rugby used to be.

“Because this Super Rugby Aotearoa, it is very brutal.

“I think last year we had a lot of chat around player welfare making sure the byes were set up well and I feel like this year they’ve just sort of flunked it and said, ‘oh well go out there and do it’.

“It’s come home to roost in the last few weeks with a lot of injuries and some of them are guys walking off with season-enders.

“That’s rugby, it does happen, but the brutality, the intensity of the games and how much is on the line, with playoff spots, it’s brutal.”

The All Blacks are due to face Italy and Fiji in the July Test window, providing border and quarantine protocols are met by the tourists, before the Rugby Championship is restored to its four-team composition with the return of the Springboks after the British & Irish Lions tour.

New Zealand will be boosted by the return of Beauden Barrett and Brodie Retallick from Japanese sabbaticals, but Foster will no doubt be hoping the recent run of injuries to high-profile All Blacks is curtailed over the coming weeks.

Wallabies coach Dave Rennie doesn’t quite have the same injury concerns following a three-week camp in Sydney this week, with utility Reece Hodge one of the few players set for an extended stint on the sidelines after a clumsy collision at the end of the Rebels’ loss to the Force last Friday.

While the Reds-Brumbies games have been as good – if not better — as those played across the Tasman, there is perhaps not the same week-to-week intensity in Super Rugby AU, a reason why All Blacks scrum-half Smith is keen for the 12-team competition to proceed from 2022.