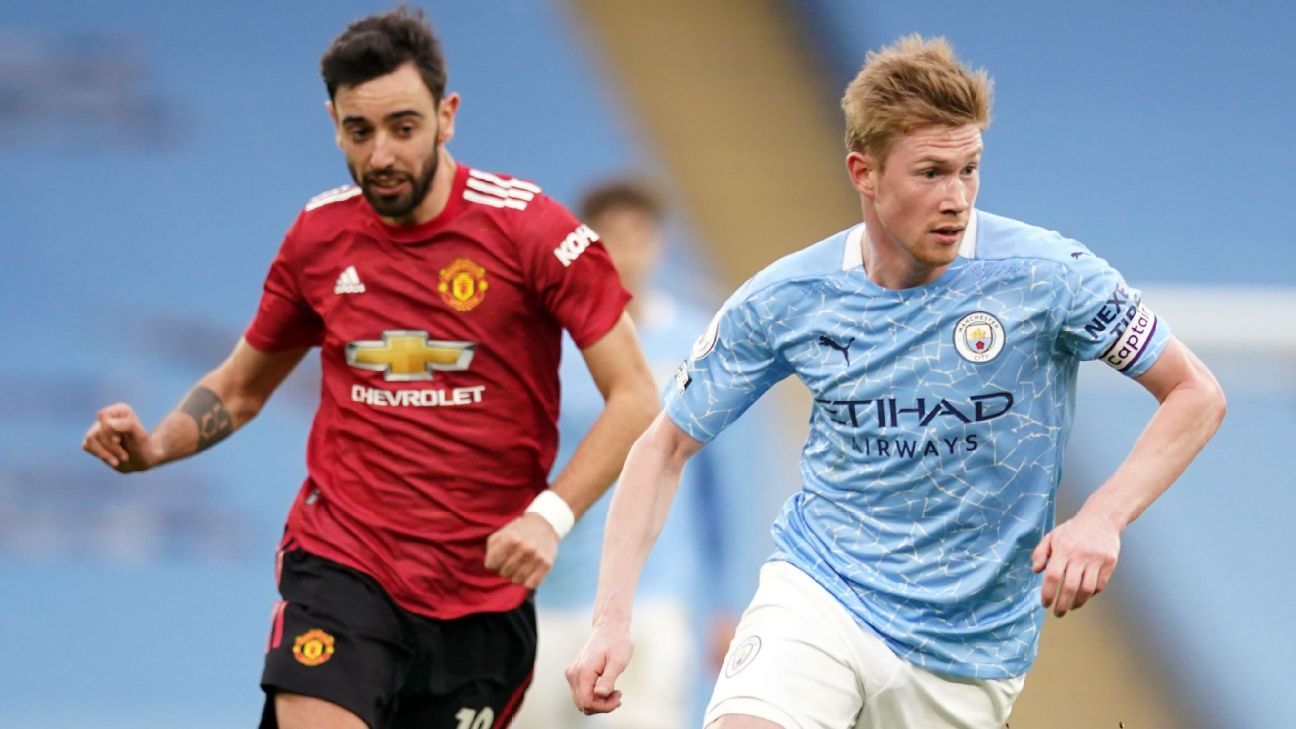 Manchester City could win a historic quadruple this season, with Pep Guardiola’s team still in contention in the Champions League, Premier League, Carabao Cup and FA Cup, in which they face Chelsea in Saturday’s semifinal at Wembley (stream live on ESPN+ in the U.S.).

But despite their incredible performances this year, City may not win English football’s top individual award due to the absence of one outstanding player in Guardiola’s squad.

While Ilkay Gundogan, Kevin De Bruyne, Ruben Dias and Ederson are all strong contenders, the performances this campaign of players such as Tottenham Hotspur‘s Harry Kane, Manchester United‘s Bruno Fernandes and several others ensure that the outcome could be the most unpredictable since Spurs winger David Ginola won both the Football Writers’ Association (FWA) and Professional Footballers’ Association (PFA) awards ahead of United’s Treble winners in 1999.

The FWA award, won by Liverpool captain Jordan Henderson last season, will be handed out on May 20 following a vote of journalists, while the PFA will announce the successor to last year’s winner (De Bruyne) in early June.

So in a wide-open race for this year’s individual honours, here’s an assessment of the leading candidates — and some deserving outsiders.

The Germany midfielder has scored more Premier League goals than any of his City teammates this season and his contribution during the winter, when he scored 11 goals between December and February, proved crucial as Guardiola’s team overcame their poor start to the campaign to claim top spot in late January before moving clear of the pack in the following weeks.

Gundogan’s versatility has enabled Guardiola to deploy him in a holding midfield role or further forward and, after several injury battles during his five-year spell at the Etihad, the 30-year-old has shown this season why Guardiola has continually selected him when fit, and now prioritises him for Champions League games. Without Gundogan’s goals this season, City would find themselves in a tense battle with Manchester United for the title.

Defenders rarely win the individual awards — Liverpool’s Steve Nicol was the last defender to claim the FWA award in 1989, while only John Terry and Virgil van Dijk have won the PFA award this century.

But in his first season in English football, following a £64.3 million transfer from Benfica last summer, Manchester City centre-half Dias has been consistently outstanding for the Premier League leaders and his arrival has ended the club’s search for a replacement for former captain Vincent Kompany. The 23-year-old has brought composure and reliability to City’s defence and formed an impressive partnership with John Stones. The Portugal international has arguably been City’s best player this season and the outstanding defender in the Premier League.

A month-long injury layoff over January and February temporarily halted De Bruyne’s contribution to City’s title challenge and the Belgium midfielder has scored just five goals this season — eight short of his Premier League tally in 2019-20. But although his stats may be down this year, the 29-year-old’s importance to City is without question and he has once again had a significant impact on the team’s push for four major trophies.

When De Bruyne plays, City are a more complete team and his value to the club was underlined by a new four-year contract, signed last week, which makes him the highest-paid player in the Premier League. De Bruyne’s impossibly high standards mean his 7/10 performances can be overlooked at times, but he has nonetheless been a key man for City this season.

This could yet turn out to be the best season of Kane’s career if the Tottenham forward helps the club beat Manchester City in the Carabao Cup final on April 25 to win a first major trophy since 2008 (stream LIVE at 11:30 a.m. ET on ESPN+ in the U.S.).

Kane is joint-top scorer in the Premier League, alongside Liverpool’s Mohamed Salah, with 19 goals and he is also the leading assist maker with 13. When Ginola beat United’s star players to both awards in 1999, the French winger secured the votes by inspiring Spurs to League Cup glory and Kane has a strong chance of doing the same. Trophy-winning success always boosts the prospect of individual awards, so Kane could be the man to beat if Spurs lift the Carabao Cup.

Fernandes has been a transformative force at Manchester United since signing from Sporting Lisbon in January 2020 and the Portugal midfielder has been the most important player in Ole Gunnar Solskjaer’s team this season. He is United’s leading scorer in the Premier League with 16 goals and second only to Harry Kane in the assists table with 11.

With his creativity in midfield, United have emerged as closest challengers to Man City in the Premier League, but having failed to win a trophy since 2017, Fernandes could win plenty of votes if he can inspire United to overcome their semifinal jinx by reaching the Europa League final.

Bamford’s season in the Premier League with Leeds will serve as an inspiration to all those players who have been forced to drop down a division after failing to make it in the top flight at the first, second and, in Bamford’s case, fifth attempt.

The 27-year-old striker has scored 14 league goals this season, with only Kane, Salah and Fernandes having netted more, and his form has been a central factor in Marcelo Bielsa’s team’s impressive return to the Premier League. Having fallen short in the Premier League during previous spells with Chelsea, Crystal Palace, Norwich, Burnley and Middlesbrough, Bamford’s performances this term have made him one of the Premier League’s most impressive players.

Jesse Lingard is the name on everyone’s lips when it comes to West Ham United right now, but while the on-loan Manchester United midfielder’s recent form has helped the Hammers maintain their surprise challenge for Champions League qualification, the real star of their campaign has been Soucek.

Shaw has battled serious injury, loss of form and more than one sceptical manager since signing for Manchester United as an 18-year-old in 2014 and, on several occasions, it seemed that the left-back’s Old Trafford career was over. But the former Southampton defender has enjoyed the best season of his career and become Solskjaer’s undisputed first-choice in his position.

Shaw has been the most consistent left-back in the Premier League and forced himself back into the England team and now seems a certainty to be named in Gareth Southgate’s Euro 2020 squad.

Everton‘s Neville Southall was the last goalkeeper to win either individual award when he was named FWA Footballer of the Year in 1985, but Man City’s Brazilian No. 1 has a strong case to emulate Southall this season. The 27-year-old is running clear of the chasing pack in the race for the Golden Glove award this term, having record 17 clean sheets — three more than Chelsea’s Edouard Mendy and Aston Villa‘s Emiliano Martinez.

But it is not just Ederson’s ability at keeping the ball out of the net that makes him so important to Pep Guardiola, it is his contribution as an attacking outlet too, with his awareness and pinpoint distribution also helping City score goals at the other end of the pitch. Ederson has been a model of consistency this season and an irreplaceable member of Guardiola’s team.

It is not easy to make a case for any Liverpool player to win this season’s awards considering how badly Jurgen Klopp’s team have struggled to defend their Premier League title. But in a campaign that has seen the Anfield squad ravaged by injuries to key players, Fabinho has been a crucial figure in both defence and midfield.

The Brazil midfielder has successfully filled in at centre-half in place of the injured Virgil van Dijk and Joe Gomez, leaving a huge hole in midfield at the same time. But since returning to his favoured position, Liverpool have found their form again thanks to Fabinho’s impact in the centre of the pitch.