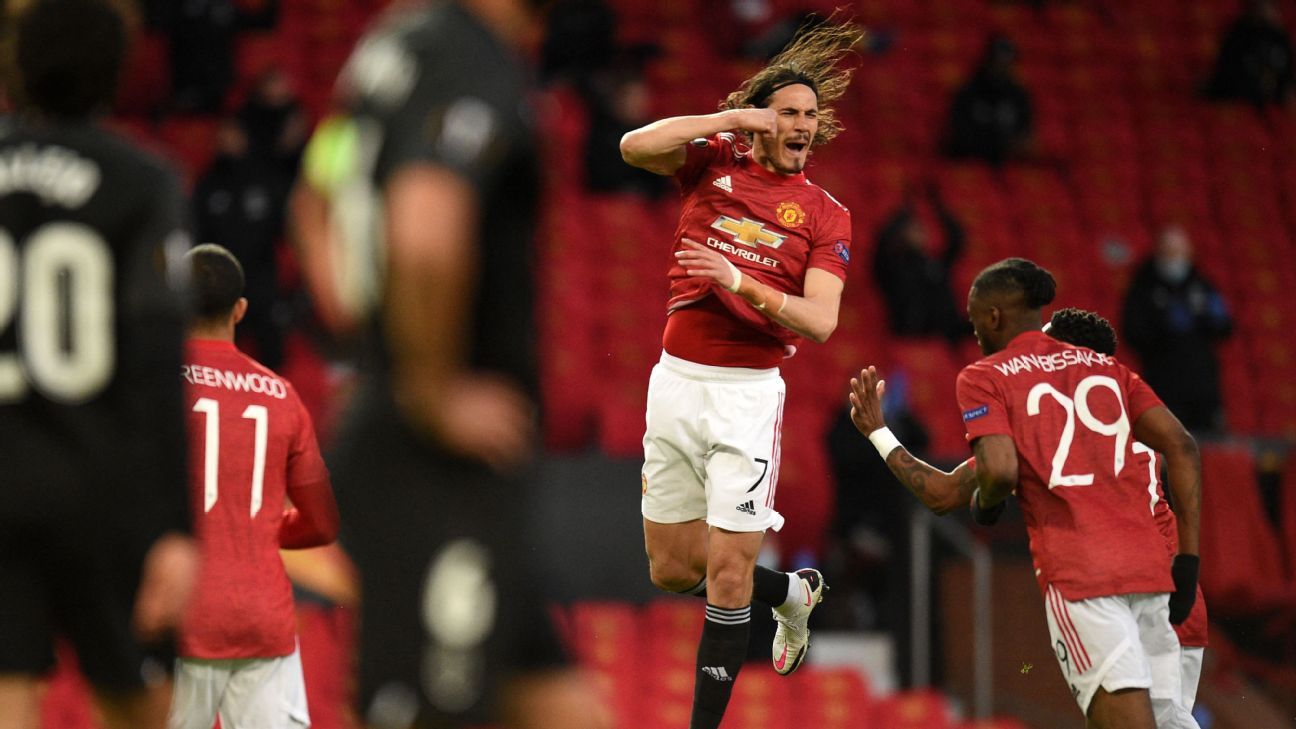 MANCHESTER, England — Manchester United have had no issue reaching semifinals under Ole Gunnar Solskjaer since he took the manager’s job in December of 2018; it’s what comes after that’s been the problem. They are through to a fifth semifinal of Solskjaer’s reign after a 2-0 win over Granada at Old Trafford on Thursday night, finishing the job after a comfortable 2-0 win in Spain a week ago. He’s still waiting for his first final and this time, AS Roma stand in his way.

Solskjaer has been hit with criticism after suggesting the Premier League is his priority, but there should be little doubt he wants to win the Europa League.

“Granada do give you a game,” said Solskjaer afterwards. “It’s a physical game, they throw people forward. You have to defend in these kind of games.

United have never lost a European knockout tie in which they have won the first leg away from home, but the Norwegian was not in the mood to take a risk and named both Bruno Fernandes and Paul Pogba in his starting XI.

Fresh off his man-of-the-match performance against Tottenham on Sunday, Edinson Cavani was picked from the start, too. The Uruguayan’s long-term future is still up in the air, but he will have a key role in United’s prospects of success between now and the end of the campaign.

The 34-year-old’s goal after six minutes — a crisp left-foot volley to score for the 50th time in European competition — put an early end to Granada’s hopes of pulling off a shock.

With Anthony Martial unlikely to play again this season because of a knee injury and Marcus Rashford nursing shoulder and foot problems, the onus is on Cavani and Mason Greenwood to score the goals. Since the turn of the year, Cavani’s form has been interrupted by suspension and injury, but he looked revitalised at the Tottenham Hotspur Stadium in Sunday’s 3-1 win and carried it on against Granada.

It said everything about his growing importance that he was replaced early in the second half and the expectation is he’ll start when Burnley visit Old Trafford on Sunday.

As important as it is that he stays fit for the remaining games, so is his decision about where to play next season. Solskjaer has made no secret of his desire to extend his deal by another year, but amid interest from Boca Juniors, Cavani is undecided. What he decides is likely to affect United’s summer transfer plans. If he goes, Solskjaer will need a new striker. Stay, and the search could be delayed for another year.

Cavani is still upset about the circumstances surrounding his FA suspension in January, but he also wants to continue playing at the highest level in Europe ahead of the 2022 World Cup in Qatar. There are also doubts about Paul Pogba’s future and it was noteworthy that in the absence of the suspended Harry Maguire, the French midfielder was handed the captain’s armband.

Booked early on, Pogba was substituted at half-time, but having set up Cavani’s opener with a deft header, he had already done enough.

“Sometimes, Paul wants to win so much, he went into a couple of tackles after his yellow card, but I thought I don’t want to risk that,” said Solskjaer. He needs Pogba available to face Roma.

The United manager doesn’t need the Europa League trophy to convince the board of progress, but a fifth straight semifinal defeat will raise questions about his squad’s mentality. Roma, with Edin Dzeko and Henrikh Mkhitaryan, will not roll over but they are seventh in Serie A — nine points behind Milan, who were beaten by United in the last-16. It is a golden chance to reach a first final and lift a trophy, even if Solskjaer ultimately has his eye on bigger prizes.

“I’ve not seen too much of Roma,” said Solskjaer. “They defend well, as Italian teams always do. We all know Edin Dzeko, so every ball into the box is a dangerous one.

“We are looking forward to it. We’re in the semis. It feels like a proper European tie because Roma is a club with lots of history. We’ve done well against Italian sides before.

“We’re going into it hoping to get to the final. If we can finish the season with a trophy, that would be great. When you get to a semi, that’s the nature of it — you play against good teams and we relish the chance again. I’ve seen the determination and attitude in players and they want to go one further and the semifinal defeats give us the motivation to go one step further.

“The next step for the team is to get to a final and win a trophy. The motivation and determination is there.”