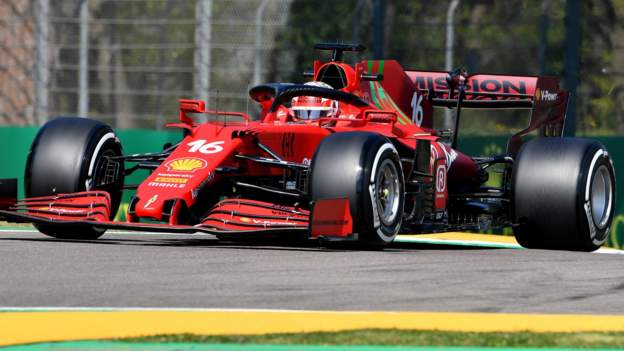 Charles Leclerc crashed his Ferrari at the end of what had been an impressive second practice session at the Emilia Romagna Grand Prix.

Leclerc had earlier set the fastest lap time of the session, only to lose it for exceeding track limits.

Bottas’ fastest time was set on the mediums, but Hamilton’s was on the softs, which is theoretically quicker but on which Mercedes seemed to struggle.

Leclerc’s best lap was 0.2secs ahead of Bottas, before it was deleted because he exceeded track limits at Piratella. The Monegasque driver also looked competitive on his race simulation runs.

After his accident in the closing seconds of the session, Leclerc went on the radio to say to his team: “Sorry, guys. I was pushing. Really hard.”

Alpha Tauri’s Pierre Gasly was third quickest from Ferrari’s Carlos Sainz, with Leclerc classified fifth with a lap set later on his soft tyres, when they had lost their edge.

Verstappen was classified 14th quickest after losing drive running wide over the kerbs at the second Rivazza corner on his first run of the session.

Leclerc was one of 11 drivers who lost lap times for running beyond the white line that marks the edge of the track at Piratella, a downhill left-hander and the fastest corner on the track.