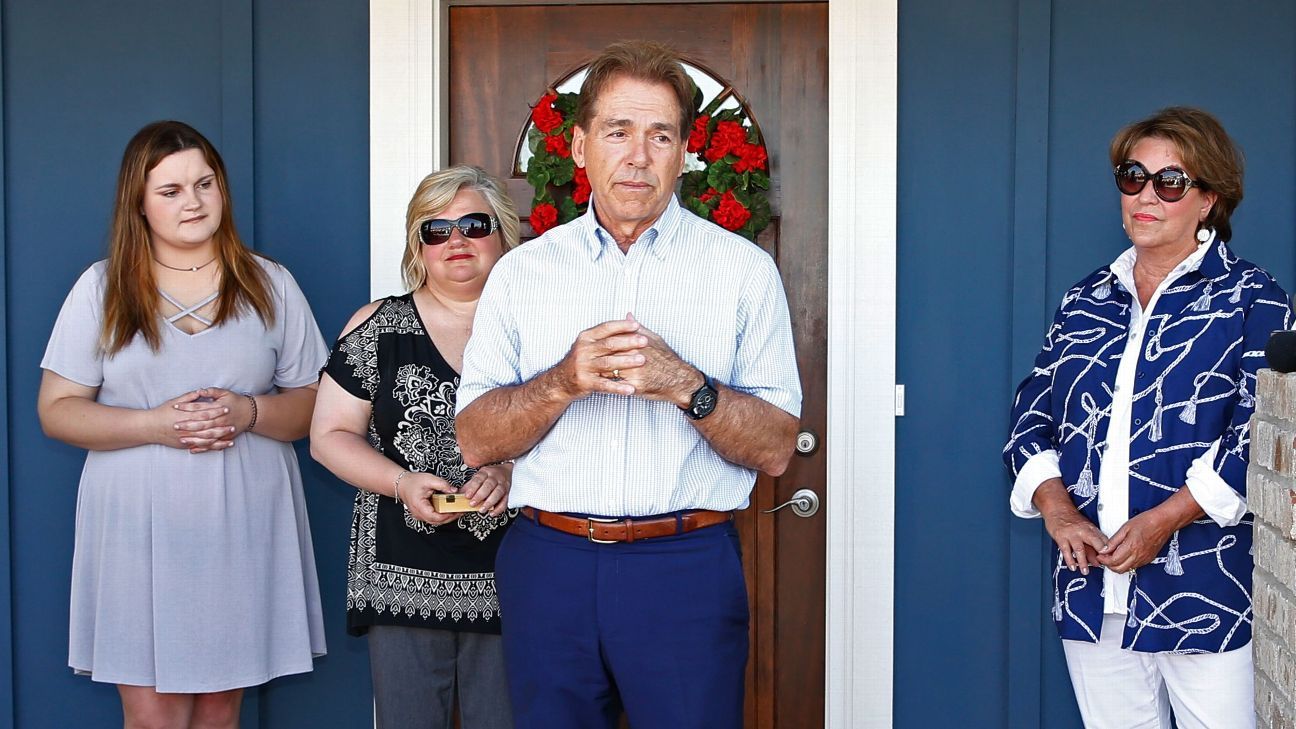 AT SUNRISE, 6:57 a.m. to be exact, on Jan. 12, 2021, Ellen Potts’ phone chimed. Still groggy, the executive director of the Tuscaloosa, Alabama, chapter of Habitat for Humanity checked the notification to see a familiar name: Terry Saban.

Potts was surprised to hear from the wife of Alabama head football coach Nick Saban so soon. Only a few hours earlier, the Crimson Tide had beaten Ohio State to win the school’s 18th national championship. The team bus hadn’t left Hard Rock Stadium in South Florida until well after midnight, which meant Terry was either running on very little sleep or none at all.

“ARE YOU READY?!” Terry Saban’s message read. “Can’t wait to start planning House #18 … it will be a house built with love.”

Potts smiled. This was the enthusiasm she’d come to expect.

Ten years ago this month, on April 27, 2011, the largest tornado in state history tore through Tuscaloosa. Mayor Walt Maddox detailed the toll in raw statistics: 12.5% of the city destroyed, 53 residents killed and 1,200 injured in just seven minutes. It was as if, Maddox said, the hand of God had slammed down on Tuscaloosa and left it unrecognizable.

The disaster deeply affected the Sabans, and those close to the legendary coach believe it caused him to reconsider his impact on people and the community.

A coaching nomad of three decades, he and his wife began putting down roots by building homes with Habitat and becoming the face of the recovery. Their initial goal was to fund the construction of 13 houses — one for each national championship the school had won to that point — but in the 10 years since, Alabama has kept winning, so they have kept building.

“There was the expectation that Saban would win and then maybe there would be an offer that him and his family would have to take. But something about 2011 changed the dynamic,” said Maddox, who became mayor in 2005 and still holds the office. “You could feel it. You could see it. We all became forged in this tragedy.”

Along the way, Barrett Jones, then an offensive lineman, began to see a different side of his coach — more understanding and compassionate.

“Not that he wasn’t still intense; of course he was,” Jones said. “But that cemented to him just how important his position and role was not only on the football team but in the community.

“That changed his perspective forever.”

THE MORNING AFTER THE TORNADO, associate A.D.s Jeff Purinton and Thad Turnipseed wandered into Saban’s eerily quiet office and could sense the coach’s anxiety.

The power was out and Saban’s cellphone wasn’t working. He wanted to help. “But there was no plan,” Turnipseed later recalled. “That’s what was driving him crazy.”

They headed for a relief effort at the Ferguson Student Center only to find more than 100 people looking at one another, lost. There was a leadership vacuum. Saban felt a familiar tug. “People need direction,” he recalled a decade later.

Saban climbed on top of a bench and began speaking. When something bad happens, he told the crowd, it’s an opportunity “for all of us to pitch in and help and do everything we can.”

He issued a challenge: “Be ready when you’re called.”

Purinton remembers Saban’s presence as he spoke, as if he was trying to get across, “We’re going to get through this and I’m here with you.”

Turnipseed gets chill bumps when he thinks about it years later. He calls it simply, “The Speech.”

Saban pushed back leaving for the NFL draft, choosing instead to hand out water bottles to first responders and visit a shelter for victims.

When he met with his team that afternoon, he ordered his players to forget about football. Instead, he said, think about what you can do to help.

Saban said he didn’t have to use the storm in pregame speeches the following season because his team never forgot.

After all, one of their own, long-snapper Carson Tinker, had suffered a tragic loss.

Tinker was holding his girlfriend, Ashley Harrison, when it hit. He was thrown 50 yards and woke up in the hospital with a concussion and injuries to his wrist and ankles. He then learned Harrison had not survived.

BEFORE SABAN KNEW IT, his wife was working the phones.

Immediately after the tornado, Terry Saban ordered dinner for shelters, purchased gift cards for families and invited a group of children to a sporting goods store where they could pick out some much-needed clothing and supplies. And those were just the things happening behind the scenes. Every time the Sabans appeared in public, they shined a light on the damage in Alabama.

Donations poured into the Sabans’ foundation, Nick’s Kids. Turnipseed, an officer in the organization, said some of the individual contributions were astronomical by its standards — upward of six figures.

The foundation wasn’t set up for something as large as tornado recovery, but that’s exactly what the Sabans decided to do.

It was personal. Their son, Nicholas, lived only a block away from the path of the tornado. He was fortunate; all his doors and windows were blown out and his roof was nearly ripped off, but he was unharmed. Their daughter, Kristen, had stopped by art supply store Hobby Lobby on her way home so she could craft while the storm passed. By the time Terry heard Kristen pull into the driveway a few minutes later, Hobby Lobby was gone.

In a matter of days, Terry had begun conversations with Habitat for Humanity about building homes for families that weren’t as lucky.

Rather than use precious finances on equipment, she called in a favor to Mike Thompson, the CEO of 29 Caterpillar franchises in Alabama: “I need bulldozers.”

When Nick Saban visited one of the initial builds, he was surprised by what he saw.

“She has players on a damn bulldozer,” he recalled.

Saban laughed, acknowledging that Terry is the “driving force” behind the family’s philanthropic efforts. It’s something repeated often by those who have worked with the couple, who will have been married 50 years this December.

He added: “I’m the financial planner. I have to come up with the funds.”

Bob Johnson, who took over the local Habitat chapter following the tornado and preceded Potts, remembers going to the Sabans’ home to finalize the details of their partnership. It was about a month after the storm, and the Alabama graduate didn’t know what to expect from the intimidating coach and his wife. Saban was reserved, sitting back and peppering in a few questions and comments. But Terry was a “force of nature,” Johnson said.

Initially, the plan was to build around five or six homes. Then someone threw out the idea of building 13.

It was ambitious — Saban wanted two homes built in time for the season opener, which was only three months away — but Johnson wouldn’t dare say no.

“You see that Coach Saban wants to do it, and Terry’s going to get it done,” Johnson said.

The first Habitat house was revealed the day before the home game against Kent State in August. As other homes were completed, Habitat hosted a block party on a street where several had been built, and a volunteer from out of state approached Johnson.

Johnson had known the Sabans long enough to have the answer.

So long as the football team keeps winning, Terry told ESPN, “We certainly can keep building.”

In 2019, Nick Saban went out to the site of home No. 17, where his wife had again enlisted roughly 30 players to build.

“She got Tua [Tagovailoa] over there on the damn scaffolding,” Saban said of his then-star quarterback. “I said, ‘Give him a job where he can stand on the ground.'”

THE NIGHT OF JAN. 9, 2012, Saban flashed a smile during the celebration of another title — the first since the devastation in Tuscaloosa.

He had just been doused, but this wasn’t like the Gatorade bath he had received in California two years earlier after his first national championship at Alabama. Back then, he grimaced during the ice-cold rite of passage, already thinking about what came next.

This time, he slicked his hair back and breathed a sigh of relief. During a postgame interview, he spoke of those back in Tuscaloosa who had gone through so much since the tornado and how he hoped that winning a championship had brought them joy.

“We’re going to continue to work to move forward and try to help people restore their lives in our community,” he said during the on-field interview with ESPN.

The past eight months had been hectic. Purinton recalls witnessing team meetings in the aftermath of the storm and how Saban reminded players of the support fans gave them every day. Saban told them this was their chance to return the favor.

“That whole season we felt like we were playing for something more,” Jones said. “It was an incredibly unifying time.”

Jones felt a change in himself, his teammates and their head coach.

Turnipseed saw less and less of the no-nonsense coach who had once fought so hard to break the fan base’s sense of entitlement. Saban had become closer and more connected to the community. He was a “little softer human being,” Turnipseed said.

After almost yearly speculation that Saban would leave for another opportunity, there was a sense for the first time that he wasn’t searching for an exit anymore.

Turnipseed said there was “no question” the tornado had prompted the change in Saban’s perspective.

Maddox witnessed Saban step off the pedestal reserved for a head football coach and begin engaging with the community. He called it “striking” to see Saban handing out much-needed supplies and speaking to families on a personal level.

The result, Maddox said, was an “unbreakable bond.”

AFTER EVERY BUILD, Terry Saban gathers the football coaches’ wives to put the finishing touches on the landscape. The last piece: a “welcome” wreath on the front door.

“What better way to recall the tragedy of 2011 than by helping families have a safe home?” Terry said.

Not that she needs help remembering that day.

“April 27,” Terry said, “will forever be branded in our family’s memories.”

Just last month — only weeks before the 10-year anniversary — the state was once again on edge as the National Weather Service issued a severe weather warning. A long-track tornado eventually touched down south of Tuscaloosa and traveled more than 100 miles across the state, destroying a neighborhood on the outskirts of Birmingham and killing five people near the town of Ohatchee.

Hours earlier, Saban was in his office keeping an eye on the weather when a reporter called. He said that if his time here has taught him anything, it’s to pay attention on days like this and listen for sirens.

“Maybe I didn’t have enough respect for them before we had April 27,” he said. “But I respect them now when the siren goes off, that’s for sure.”

Saban grew up in West Virginia and spent much of his coaching career in the North. So while he’s experienced his fair share of rough snowstorms, he said he had never been through anything like the tornado of 2011.

“It made me a lot more compassionate,” he said. “You realize you can do a lot to impact other people in a positive way and make their life better.

“And we probably carried that on to a larger degree after that happened than we did before.”

Ten years later, Saban said he doesn’t hear much about the homes they built or the gift cards handed out.

The comment he gets the most, he said, is simply, “You were there.”