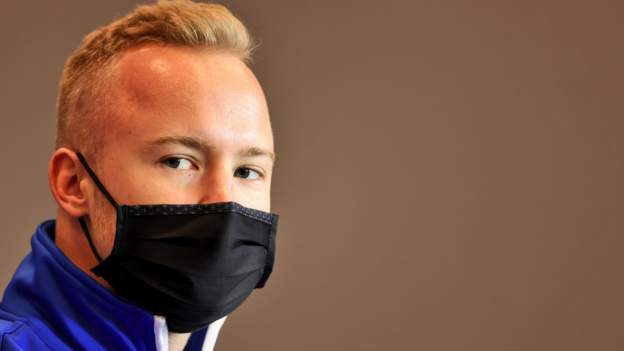 Nikita Mazepin is “trying too hard” at the start of his F1 career, according to his Haas team boss Guenther Steiner.

The Russian driver spun once and crashed in first practice at the Emilia Romagna Grand Prix on Friday.

That follows four spins at the season-opening Bahrain Grand Prix before he crashed out of the race on the first lap.

“Learning is painful, but at some stage that will hopefully stop,” Steiner said.

Mazepin is one of two rookies at the US-based Haas team this year, alongside German Mick Schumacher, son of seven-time champion Michael.

Schumacher also crashed out of the Bahrain race, but has generally had a more controlled start to his F1 career.

Mazepin’s incident-packed debut has followed a controversial winter in which he apologised after a video of him inappropriately touching a woman was posted to one of his social media accounts.

Steiner added: “I said to him: ‘You need to keep your head high. These things happen and obviously in the moment he’s the beat-up boy, you know? Everybody beats up on him. That makes it tougher.

“In the end you come out on the better side – but you just need to keep your head up, focus on your next race and keep on going.

“At some stage [the incidents] need to be reduced but he is trying very hard for that and I guess sometimes he is trying too hard. He needs to find that limit. But that’s for him to find, not us. We can help him in doing that.”

Mazepin insisted he had had a “positive day” on Friday at Imola.

“I learned a lot about the car,” he said. “I made another step forward with the team in terms of understanding what car I want to drive.

“P1 was a very good lap time. A mistake here and there, you drop a wheel [into the gravel] and there is no coming back.

“So far it is quite difficult to keep it on track but I am doing my best.”

But he has also completed an extensive, private driver-development programme with Mercedes, at which he has driven one of their F1 cars at a number of the current tracks.

This was funded by his father, the Russian billionaire industrialist Dmitry Mazepin, whose company is now financially backing Haas.

“I am definitely not leaving anything on the table out there,” he said. “That is the nature of my life. I try and do something to 100%. I wouldn’t want to go to sleep and think I had left some time there.

“But then there is a balance which I haven’t mastered yet. But I still have some time and I am totally on the same page with my team boss.”